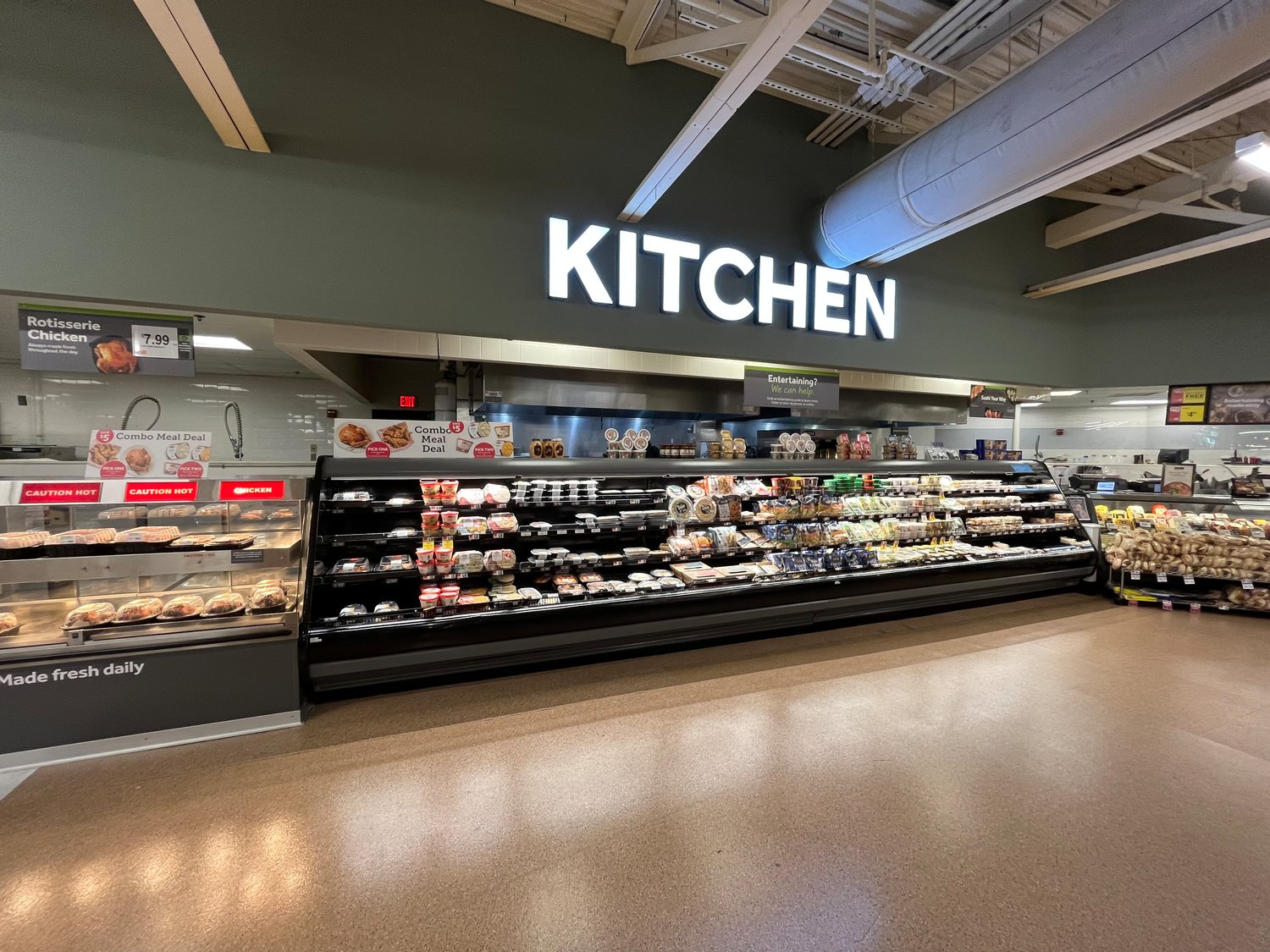 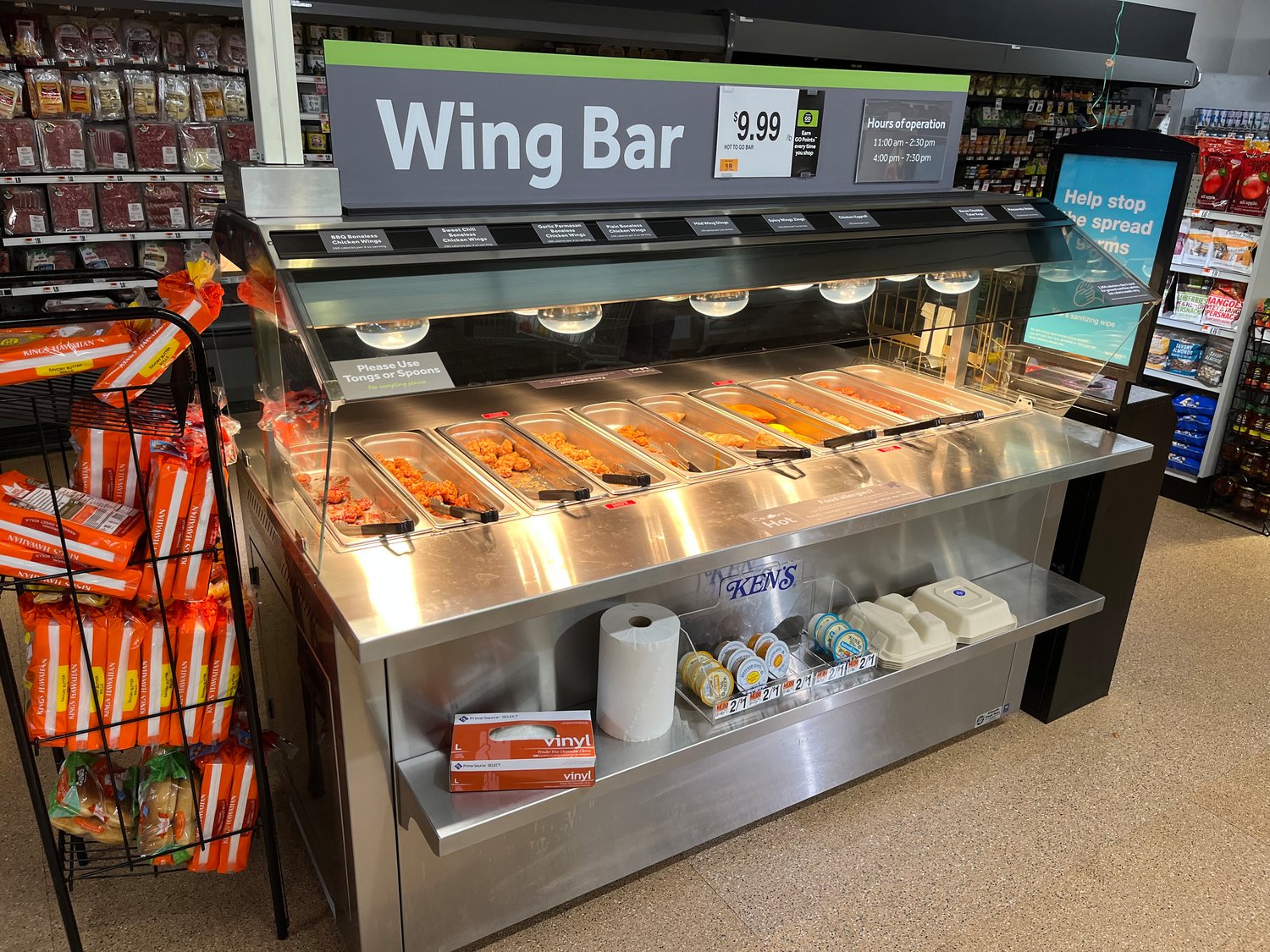 The new wings bar gives shoppers the option to grab a hot snack if they are on the go.
Will Sheeline/Herald
Previous Next

I like the changes a lot. I’m very happy.”
Kathy Patti, customer
By Will Sheeline

Oyster Bay’s Stop & Shop is back after closing its doors for nearly a month while redesigning the interior and updating the store’s refrigeration system. Oyster Bay residents can once again buy their groceries without leaving the hamlet. Even so, some have different opinions on the changes to the store.
A lot of work was done when the store was closed from July 14 to Aug. 12, many of which were behind the scenes. Most importantly, the store’s heating, venting and cooling systems were all upgraded, allowing Stop & Shop to keep perishable goods like meat and dairy in stock for longer periods with a lower cost to the store.
Some shoppers noticed the change in the air conditioning system and commented on how much cooler and better regulated the temperature felt. Kathy Patti, of Oyster Bay, who has been shopping at Stop & Shop for roughly 30 years, mentioned how much cooler the space felt, and how much cleaner it looked.
“I like the changes a lot. I’m very happy,” Patti said. “I like the lighting, it’s so well lit, of course it’s clean, and the new AC feels great, for me and my groceries.”
The new store also boasts an extended hot foods bar, which includes a wider range of freshly prepared entrees and sides, as well as a wings bar. This was included to have more pre-made foods readily available for younger families and shoppers on the go, who may not have time to prepare food at home.


Richard Pinnock, of Oyster Bay, who said it was his first day back at Stop & Shop since it had reopened, thought the changes overall had been good for the store. He mentioned that although he hadn’t a chance to try them, yet he was interested in the new availability for pre-made meals being provided.
“So far the changes have been good, notably the lighting and their stock is strong,” Pinnock said. “We haven’t gone to every area of the store yet, but it’s good to hear that there’s more options at the food bar.”
The new options at the hot food bar include everything from quiche Lorraine to pre-made soups and new sandwiches. The wing bar also provides numerous options for hungry shoppers on the go, including wing dings and mozzarella sticks.
Some shoppers found that as the new comes in, the old comes out. Liliana Hinojos-Madrid, of Oyster Bay, said she noticed a negative change at the sushi bar section of the kitchen, normally a favorite.
“Something that we were a little bit disappointed about was the limited selection of sushi,” Hinojos-Madrid explained. “We’re a frequent flyer for the sushi on Wednesdays and it’s very limited now. There were only four options.”
Customers have also had to deal with readjusting to the new layout of the store, with numerous types of foods and produce having been moved around and relocated.
Vanessa Pyres of Oyster Bay, who has been coming to the Stop & Shop since it first opened, noted it was difficult to reorient herself to the new layout after so many years.
“I don’t really see that much of a change other than I’m confused going down the aisles,” Pyres said. “You know, it’s nicer, it’s cleaner, and we’ll see what happens.”
Overall, opinions seem mixed on the value of the changes, however, the major upgrades, such as changes to the air conditioning and heating, may go unnoticed by the average shopper. For Ross Hernandez, who although not an Oyster Bay resident does shop here with his friend Hinojos-Madrid, the changes to the store’s layout and pre-made food options did not make a significant impression.
“It looks like there’s been a facelift, but everything still looks the same,” Hernandez said. “They kind of changed the layout of where things are located, but overall, it wasn’t worth the wait.”
Report an inappropriate comment