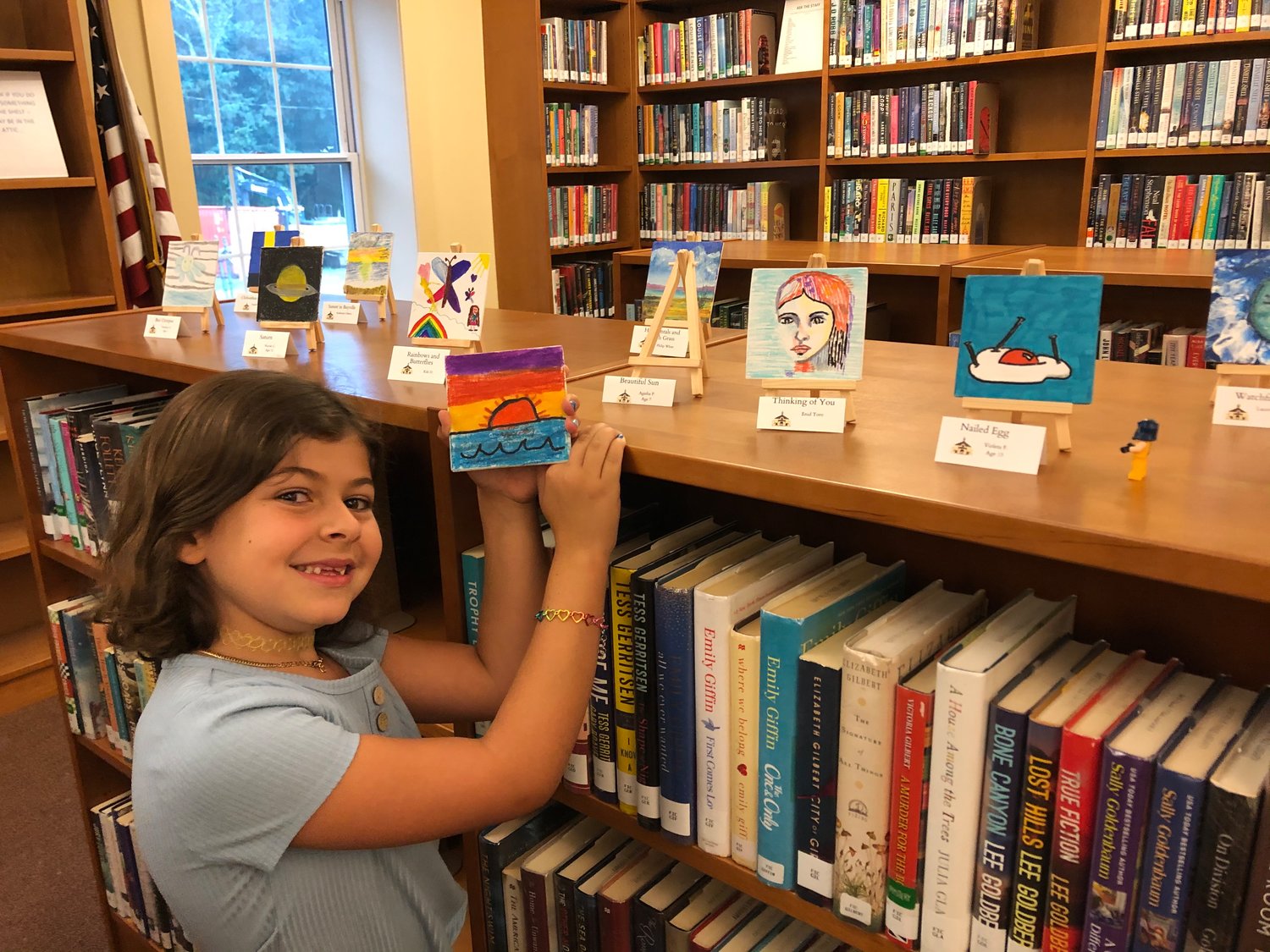 Agatha Pileggi, 12, created a Bayville sunset, which is on display at the Bayville Library in the Tiny Art Show.
Seraina Caviezel/Herald 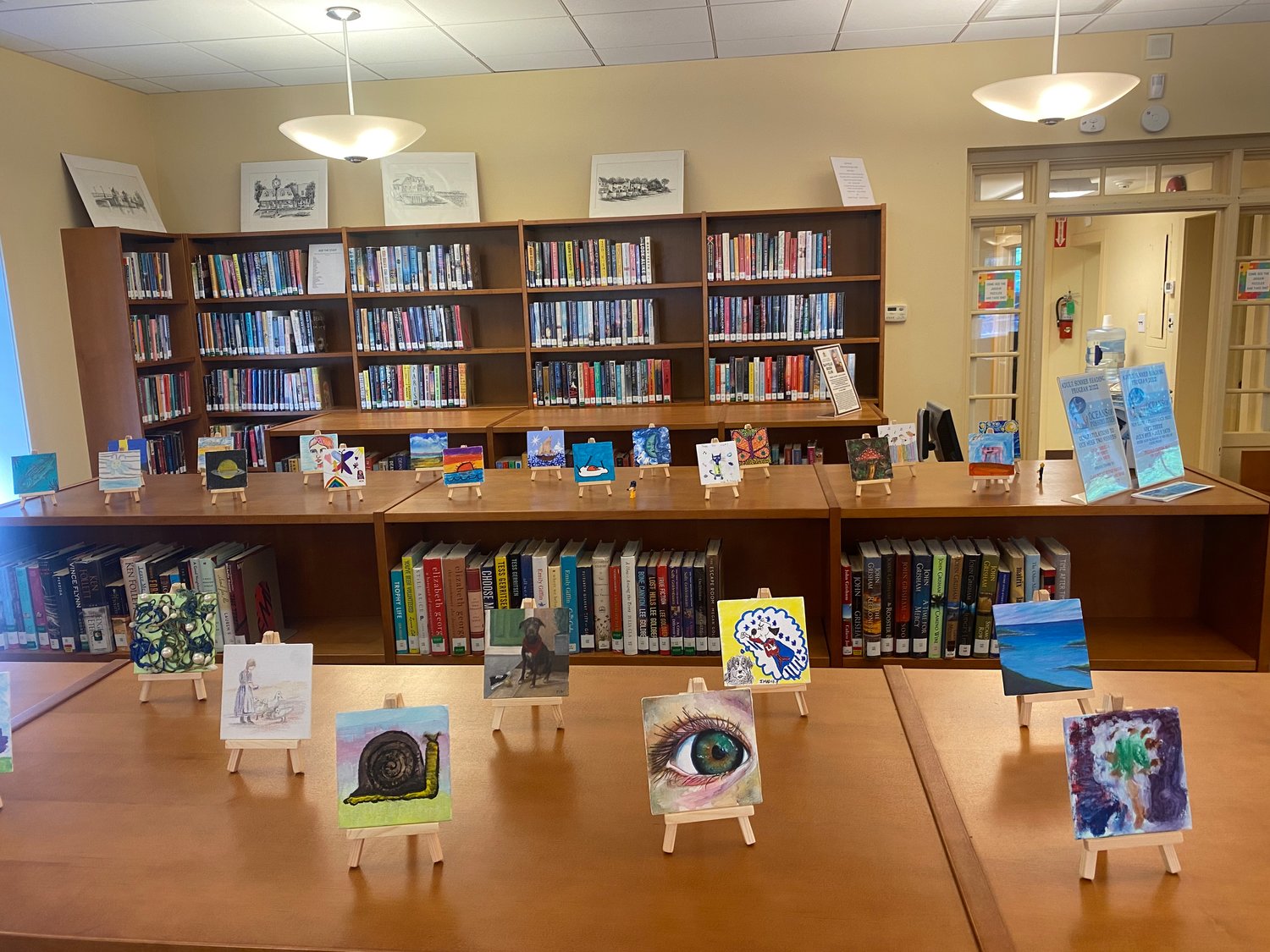 The artwork from the Tiny Art Show created by children, teenagers and adults is on display on top of the bookshelves near the entrance of the Bayville Library.
Seraina Caviezel/Herald 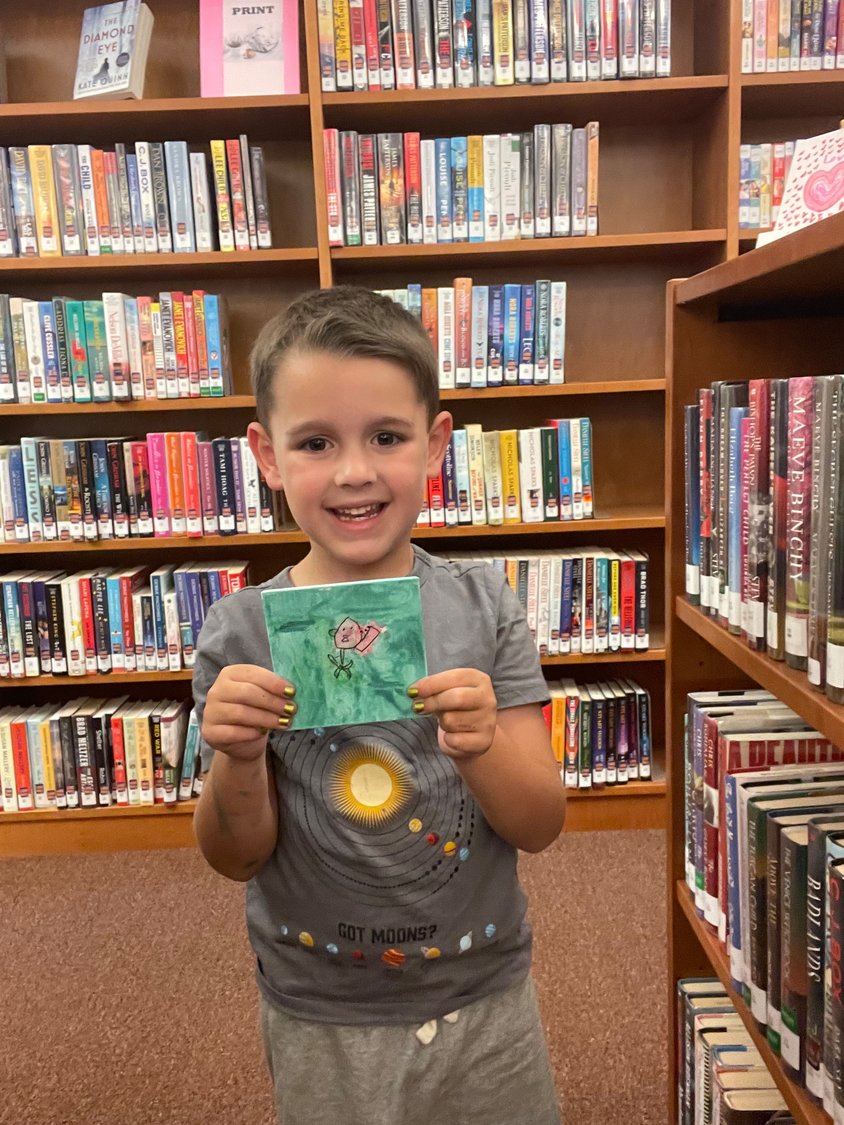 Kristy Fumante, the adult program coordinator at the Bayville Free Library, was searching for a way to bring people back to the library. The coronavirus pandemic had forced an extended pause in indoor activities, but now people were out and about again. Fumante wanted them to stop by the library, too.
Looking through a Facebook group for librarians, she came across an idea that she thought might work: hosting a tiny art show.
So, in June, the library gave out small canvases — 4 inches square — to anyone in the community who wanted to participate. There were no instructions, Fumante said, other than to go crazy, do whatever you want, and return them by June 25.
“We wanted to do something for the public to do,” she said. “We got kids participating, we got teens, we got adults. Everybody.”
The result? Forty tiny canvases are now on display on the bookshelves near the entrance to the library.


“We want people to return to the library,” Pat Pileggi, a board member, said. “The library is so much more than just books. The library does so many things.”
The Tiny Art Show did more than bring people back to the library. It also served to display residents’ artistic talent. “We have always showed people’s artwork on our walls, and some people need more encouragement to show their stuff, and we gave them the space to do it,” Pileggi said. “There are so many artists in Bayville. Art means a lot to our community.”
Participants in the show were also made aware of the many other library programs, including craft sessions for adults and children, book clubs and knitting groups.
“They have really great programming there,” Dory Agazarian, a Bayville resident, said. “They run a lot of different things to get people in. The more I’m in and out of the library, the more I’m looking at what’s going on. It’s just such a welcoming place.”
Agazarian, a water colorist who had previously had a show of her own on display in the building, submitted a piece for the Tiny Art Show, as did her 5-year-old son, Theodore Schweigert.
“It was so cute, because every time my son would be painting or coloring, he’d be, like, ‘I’m going to hang this in the library just like you,’” Agazarian recalled. “Then I saw that they had this mini art show going up, and it was a perfect opportunity, and I said to him ‘You can also have your art hanging at the library.’”
Her son’s piece is a rendering of himself, calling his grandmother over FaceTime. His mother said he was excited about his project. It was a nice opportunity, she added, for him to feel like his art is a part of the community.
“I just loved what it opened up for him,” Agazarian said. “He saw that he’s also an artist that is worthy of display, just like Mommy’s stuff, and what he is able to show is what he wants to show.”
Contributions to the Tiny Art Show varied, exhibiting a wide range of designs and techniques, from abstract art to collages and from watercolors to the use of pearls and shells. “It was inspiring,” Agazarian said. “It was a burst of creativity and a multitude of different experiences, and it was just energizing.”
Pileggi’s granddaughter Agatha Pileggi, 12, created a Bayville sunset on her tiny canvas. “You see the love of Bayville expressed many times throughout the show,” Pileggi said. “I think that’s the big thing. The young and the old together on one project.”
The show did more than provide a showcase for creativity. For some, it was a way to connect with other community members. “Art allows us to access the beauty in the day-to-day,” Agazarian said. “It’s a way to push pause, and check in with yourself and your world and slow down time a little bit, and then it’s a way to see into the internal lives of other local artists and people. It was a very valuable experience in terms of feeling connected to neighbors, and also realizing the kind of amazing creativity and ability that is out there just in this little community.”
Report an inappropriate comment