Ukrainian woman brings love of cats to the U.S. 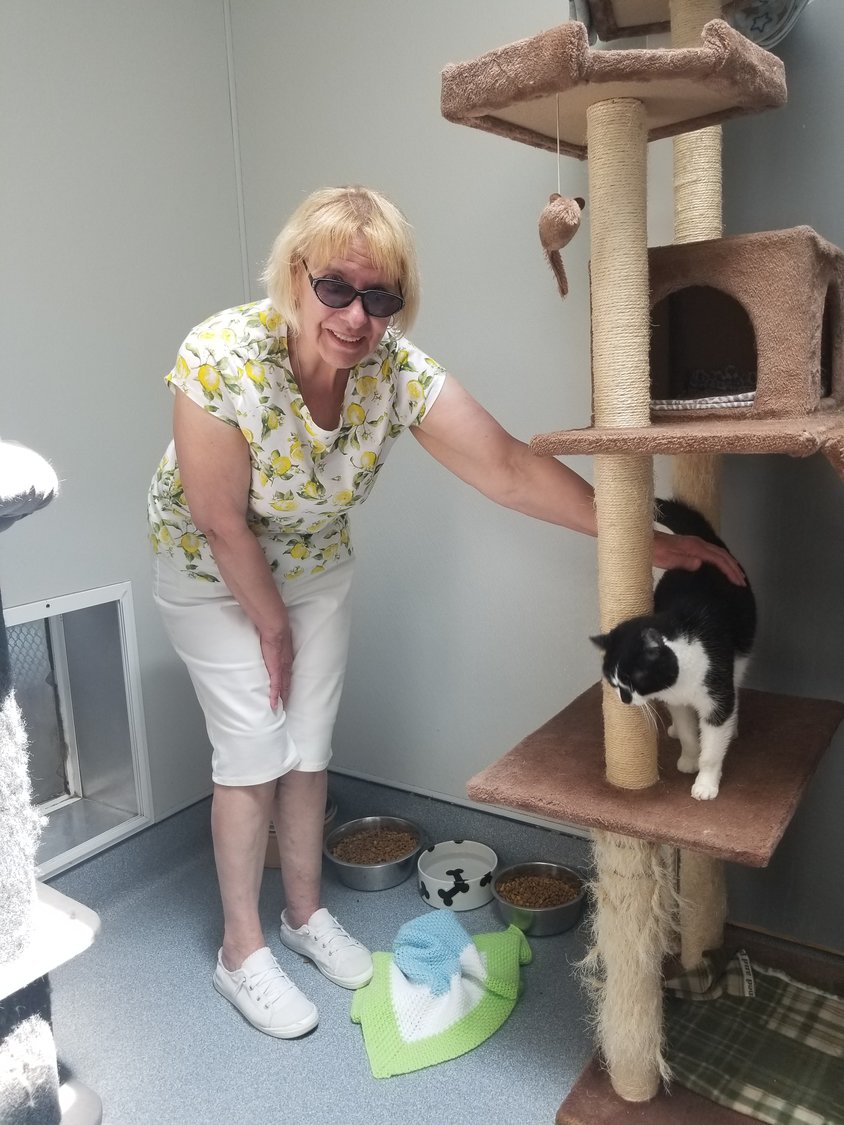 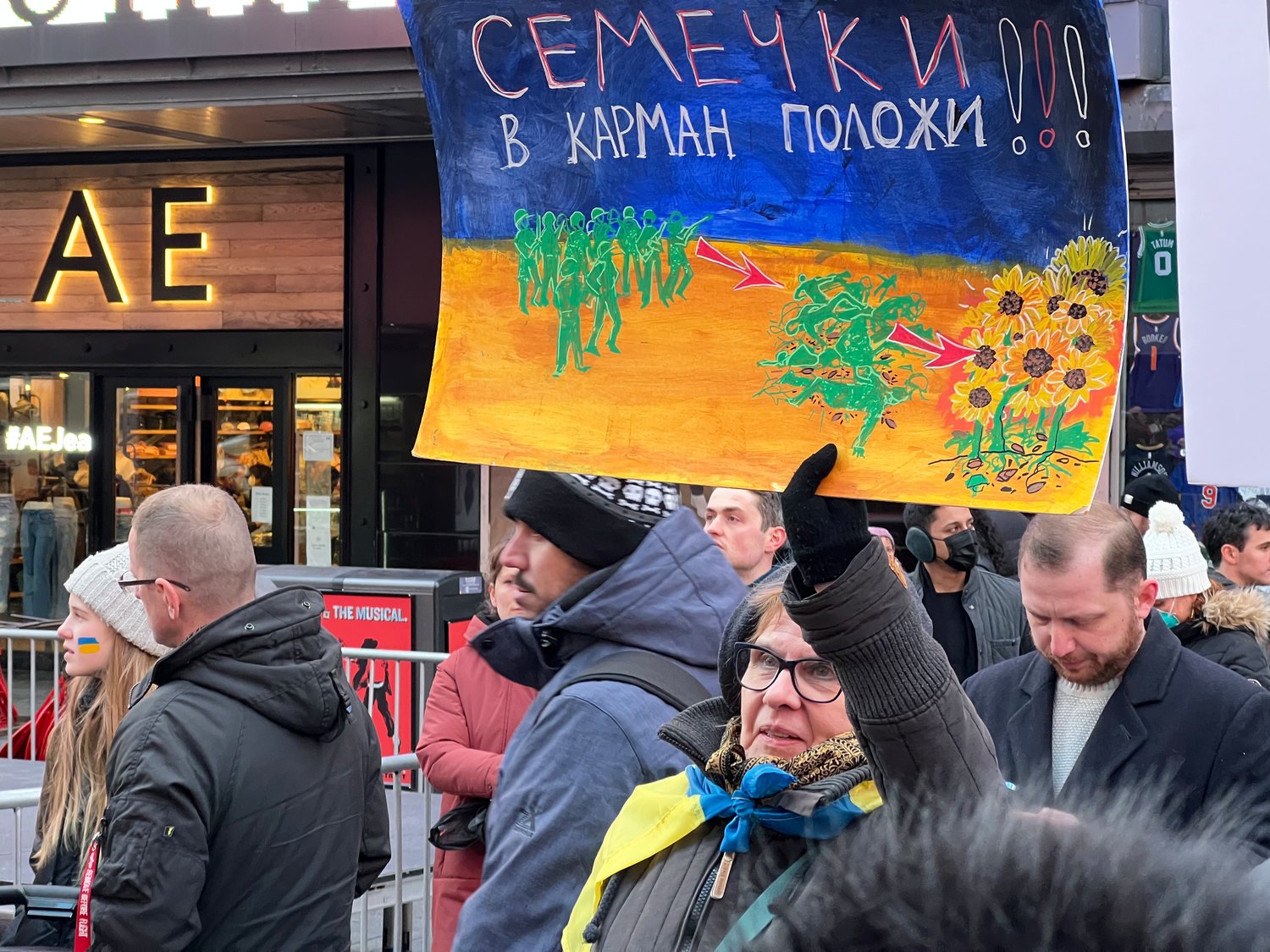 Natalia Homcharenko took part in a protest in Manhattan against Russian’s invasion of her homeland, Ukraine on Feb. 25. Her sign read, “Don’t forget sunflower seeds,” which refers to a Ukrainian woman who offered a Russian soldier sunflower seeds so they would bloom when he died. The sunflower, Ukraine’s national flower, has become a symbol of resistance.
Courtesy Natalia Homcharenko
Previous Next
By Laura Lane

Natalia Homcharenko, of Ukraine, misses her six cats terribly. When she left her three-room flat in Kyiv to board a flight to New York on Feb. 4, she thought she would be back in a month. She wasn’t worried about Burshtyn, July, Kari, Luchik, Murysia or Rysia, because she had made arrangements for her longtime friend Vera to stop by each day to take care of them.
Homcharenko, 68, a retired librarian, left Kyiv because her son, Nick Naymushin, worried that the situation there was becoming too dangerous for his mother. Naymushin, a Locust Valley resident, has lived in the U.S. for eight years and became a citizen, making him eligible to sign up for the Smart Traveler Enrollment Program, which sends American citizens traveling or living abroad the latest security updates from U.S. embassies. Those in Ukraine were being told to leave.
“The tone of the messages became more and more urgent,” Naymushin said. “Mom had visited us last fall and had fun. I told her to think of the trip as insurance. If something bad happens there, she would be covered.”
He tried to arrange for his brother, Egor, who is 26, to leave too. “He is in the Ukrainian armed forces,” Naymushin said. “He said, ‘This is my country. I’m not going to leave.’”
On Feb. 24, Russia invaded Ukraine, making a return trip impossible for Homcharenko.


Although her friend has continued to take care of her cats, July recently died. Naymushin said his mother was devastated. Even so, she said she remains grateful for Vera’s dedication to her cats.
“Vera means ‘faith’ in English,” Homcharenko said. “When the air raids first started, no buses were running. Vera walked a mile to take care of my cats. She’s a beautiful friend — my heart friend.”
When Homcharenko realized she would be in the U.S. longer than she had imagined, she decided that she needed to learn English. Unable to drive, she walked to the Locust Valley Library to join Paola Diaz’s English as a Second Language class.
“Every time we got together, she would show me pictures of her cats and tell me their names,” Diaz, the library’s outreach coordinator, said. “She was broken-hearted leaving them with her friend. I felt so bad for her.”
Diaz said that Homcharenko didn’t speak any English, and was looking for ways to make learning the language easier for her. Diaz had an idea, and drove her to Cove Animal Shelter in Glen Cove. “When Natalia walked into the room with all the cats, she started to cry and I started to cry,” Diaz recounted. “We did a lesson with cats, where I told her in English the body parts and the word for cat litter. We were there for an hour and a half.”
At the end of the lesson Homcharenko filled out the form to become a volunteer. For the past month and a half, Diaz has been driving her to the shelter every week after the library’s ESL class, and picking her up four hours later to bring her home.

A new lease on life
“The animal shelter makes Mom want to live,” Nick Naymushin said. “The cats cheer her up.”
Homcharenko cleans the litter boxes, feeds the cats and pets them. She said it has made her very happy. “I love every single cat there,” Naymushin translated for his mother. “I love cats for their independent character and for their kindness and for their insightful eyes. They’re very intelligent, and full of emotions for the fact that they always sense my mood.”
Diane Connolly, who lives in Locust Valley and also volunteers at Cove, described Homcharenko as a “sweet and loving human being.” She’s the kind of person who’s always looking for more to do, Connolly said, adding that Homcharenko won’t let her open a can of cat food, fearful that she’ll break one of her manicured nails.
“She loves the cats. Therefore, she understands them,” Connolly said. “Natalia’s interaction with the cats is over the top. You can see how happy she is to be at Cove. I think the cats are healing for her.”
Homcharenko, who is committed to learning English as quickly as possible, has been working with a tutor, Dimitry Popow, of Locust Valley, for the past two months. Although Popow was born in Austria, his family is Russian. He said he discusses the situation in Ukraine with Homcharenko, who also often talks about her cats.
“She complains that on the one hand, she misses them, and then she says she’s upset for her friend who has the burden of taking care of the cats,” Popow said. “She loves animals very much. She even goes to different areas near her (son’s) house to find strays to feed them.”
Popow said she is eager to learn English and tries hard, but sometimes her mind wanders. “She came to visit her son and now she’s stuck here,” he said. “Will she ever be able to return to her country? And the war is close to her because one of her sons is in the army.”
But Homcharenko said she loves living in Locust Valley calling it a "magical place."
During her career, after graduating from the Ukraine Institute of Culture with a degree in fiction and art literature, she became a manager at a library warehouse in Ukraine, and was responsible for 86,000 books. Her second passion, aside from cats, is art and architecture.
“She wants to learn English so she can understand what is written when she goes to the museum or at the library,” he said. “I tell her to get a job in the museum or the library. When we went to the (Metropolitan Museum of Art), I learned more about the paintings from her then from the descriptions, which she can’t read.”
Homcharenko said she planned to continue volunteering at Cove, which Connolly said makes not only the cats happy, but everyone around her as well. “She’s just such an asset,” Connolly said. “She has a heart that goes beyond any language barrier.”
Report an inappropriate comment