Veterans are honored at Saint Dominic 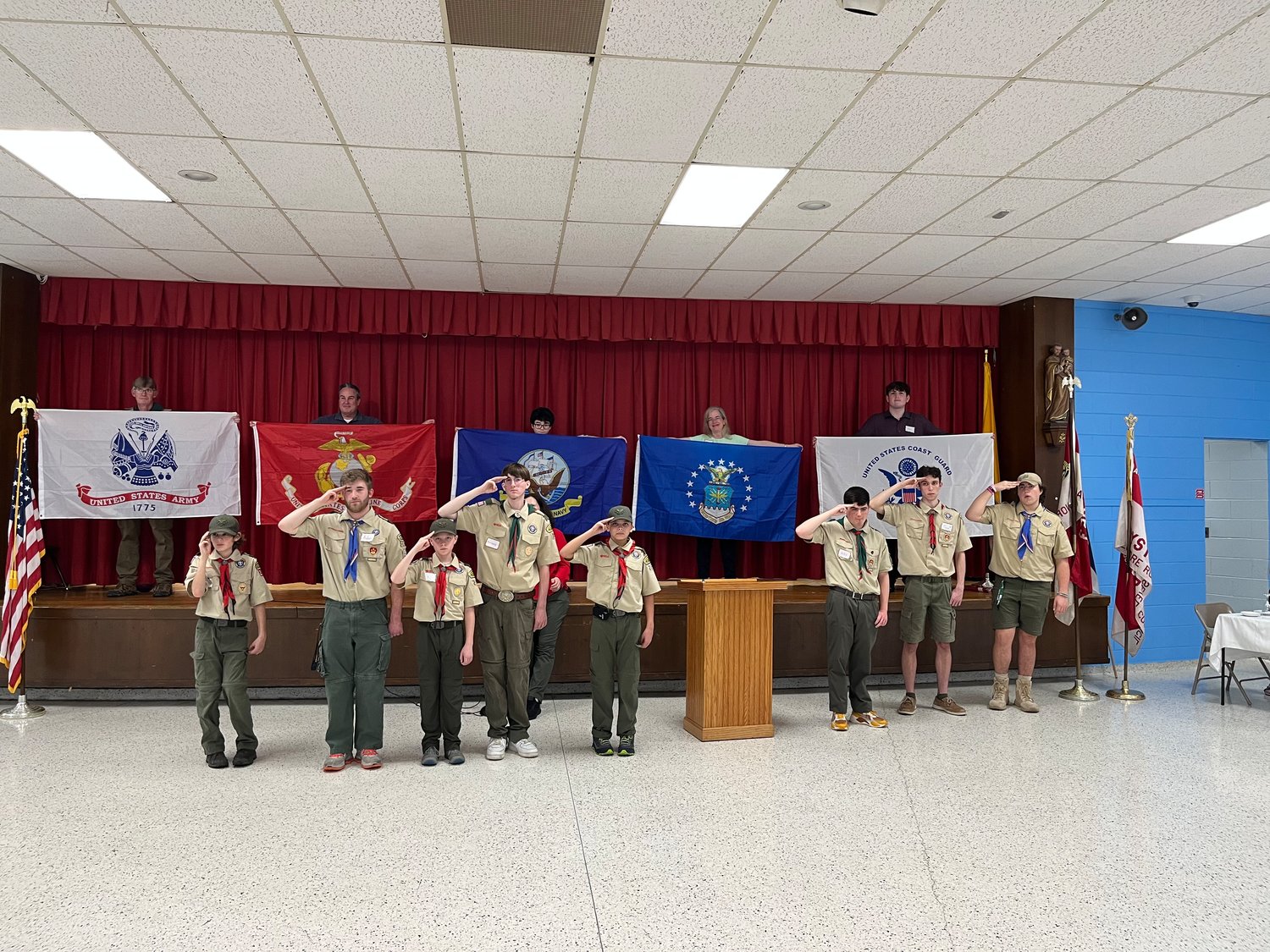 Members of Oyster Bay Boy Scout troops honored veterans at the Veterans Day dinner at Saint Dominic Church, amid the playing of the anthems of the different branches.
Will Sheeline/Herald

Veterans from across the North Shore gathered at Saint Dominic Catholic Church in Oyster Bay on Nov. 6 for an early Veterans Day dinner and celebration. The honorees had the chance to eat, chat and enjoy being recognized for their service by members of local scout troops as well as the church’s priests and seminarians.

This was the sixth annual Veterans Appreciation Dinner, an event created in 2014 by the mothers of several Boy Scouts and Girl Scouts, who were concerned that not enough was being done in the community to show veterans how much their service and sacrifice were appreciated. According to Linda Mantovani, one of those mothers, they came up with the idea to host a dinner.

“We . . . just started talking, and then we were like, can we ask the Boys and Girl Scouts of Oyster Bay to donate food, or tablecloths, or trays, and whatever else we can get donated?” Mantovani recalled. “So everyone in the community all of a sudden just started donating everything, and we had so much of everything.”

The dinner ran uninterrupted from 2015 until 2019. Although the coronavirus pandemic forced a two-year hiatus, this year’s event made clear that the unofficially named Veterans Appreciation Dinner Committee hadn’t missed a step.

Veterans from Oyster Bay, Bayville, Locust Valley and Roslyn Harbor enjoyed the company of their brothers and sisters-in-arms as they were served dinner by members of the hamlet’s Boy Scout Troops 253 and 299 and Girl Scout Troops 65 and 220. The food was donated by local restaurants and food distributors including Gino’s and Mario’s pizzerias, the Coach Meeting House, Stellina Bakery and Café and Stop & Shop.

Veterans of several wars and branches of the military expressed how much the event meant to them, some fighting back tears as they described how touching it was to see their sacrifices and the memories of their fallen brethren honored by members of their community. A seat and a table were left empty in remembrance of those who had made the ultimate sacrifice for their country.

“It’s been a couple years since they had this, but I think it’s terrific that they put this together to honor the veterans,” Army veteran and Oyster Bay resident Dave Fisher said. “The food is very nice, and what they do for us to show us their respect, it really means a lot, and we thank them for that.”

“The food is great, and it’s such a pleasure to be here,” added Arturo Edwards, who’s also from Oyster Bay and also served in the Army. “I’m a Vietnam veteran, and this, this honoring, is something we’ve waited for for many years.”

The Saint Dominic parish and administration has provided the venue for the dinner since the first one eight years ago, with the priests helping out as food servers. The Rev. Tom Coogan, the church’s pastor, explained that this kind of community service is not only integral to living a true Christian life, but also essential to showing veterans just how much their service means to their neighbors.