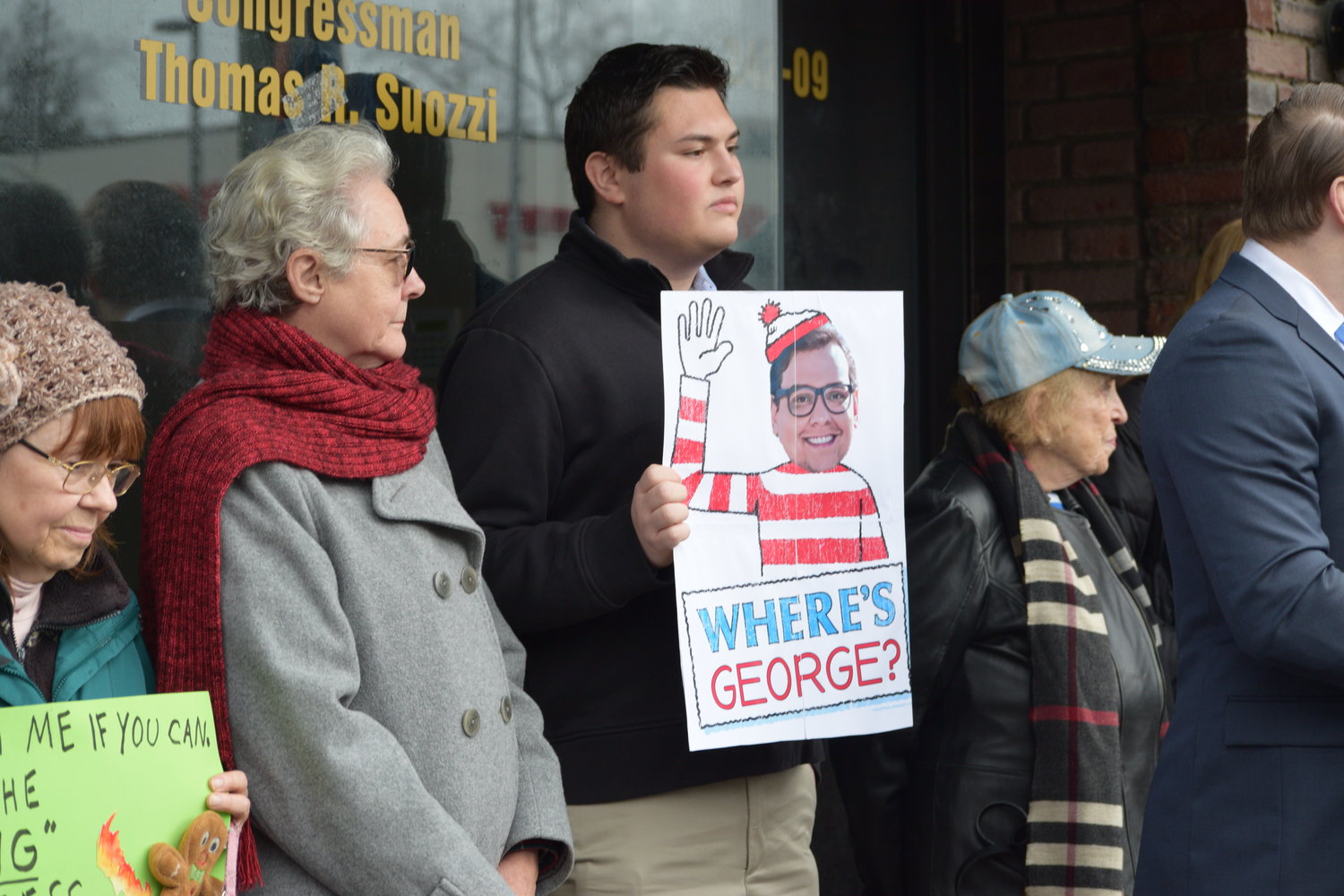 Aidan Davis, a leader of the group Concerned Citizens of NY-03, with a sign likening U.S. Rep. George Santos’s reluctance to appear in public to ‘Where’s Waldo?’
Michael Malaszcyzk/Herald 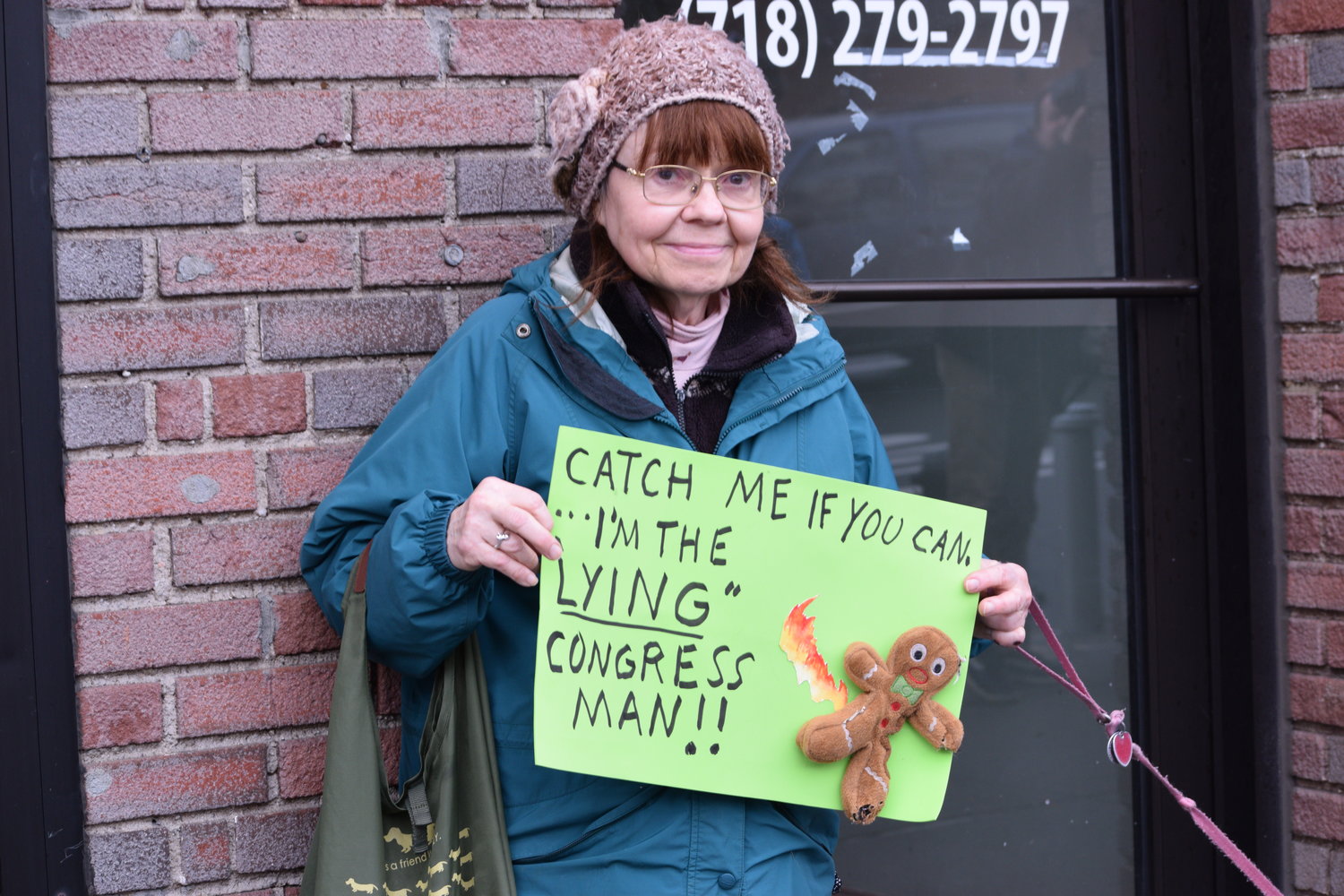 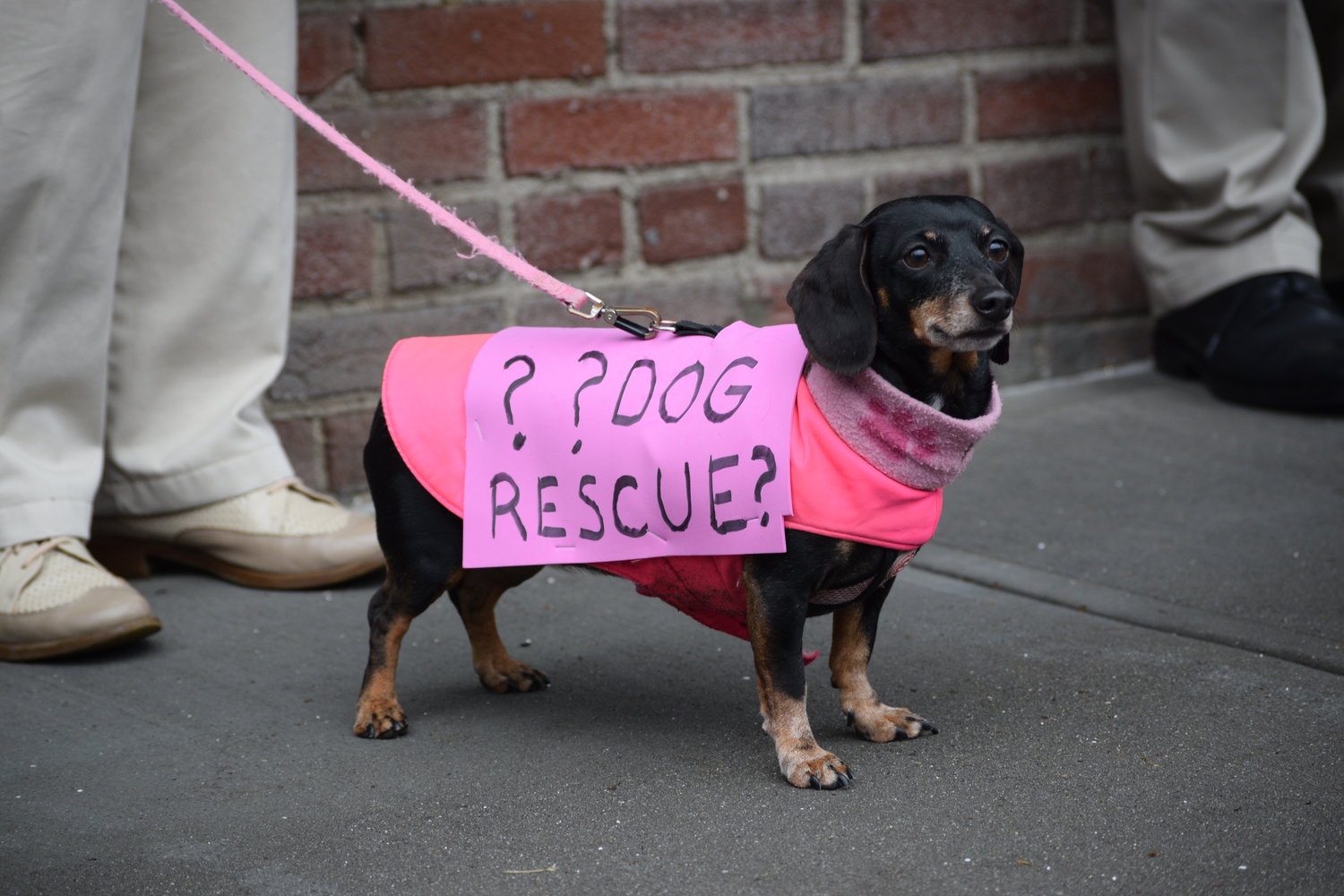 Vicky Cosgrove of Little Neck brought her dog, Sophie, who was a rescue, and whose appearance mocked Santos’s claim to have run an animal rescue at one point.
Michael Malaszcyzk/Herald
Previous Next
By Michael Malaszczyk

U.S. Rep. George Santos has done an excellent job of staying out of the public eye during his first couple of weeks in Washington. When he returns home to Long Island, it might not be as easy.

Santos, who is at the center of a media firestorm for allegedly fabricating most of his resume during his campaign for Congress, is facing calls to resign from around the political world. The Nassau County Republican Party called on him to step down and announced that it would not work with his office.

Nassau County Legislator Josh Lafazan announced a next step in the effort to force Santos out at a Jan. 13 news conference in Little Neck, Queens, outside former U.S. Rep. Tom Suozzi’s office. The space appeared vacant, and has not been renovated to indicate that it will serve as Santos’s home congressional office.

“Despite pressure from Republican and Democratic elected officials, despite outrage from constituents here, despite local, state, federal and international headlines, he refuses to go,” Lafazan told reporters. “That is why today we are launching the ‘Where’s George’ campaign, we are encouraging people across Long Island and Queens. If you see George Santos in public, take a picture of him and upload social media with the hashtag ‘Where’s George?’”

According to Lafazan, this is a way to force Santos to answer to his constituents, whom he appears to be hiding from.

“If George Santos will not come to us, we will come to him,” Lafazan added.

Aidan Davis and Jody Kass Finkel from the group “Concerned Citizens of NY-03,” are calling on the Nassau GOP to do even more.

“We need Republicans, we need Democrats,” Kass Finkel said. “We need our local elected officials to get together and join hands and call for his expulsion from Congress. We need our members of Congress of the entire states to do that.”

“We applaud them,” he said, referring to the Nassau GOP’s calls on Santos to resign. “It’s a wonderful thing. But while they held their press conference, he announced he wouldn’t resign.

There’s one other path, and that is to get Congress to expel him, and so far they have refused to sign. That’s why we’re saying it’s lip service.”

The end goals of the “Where’s George?” campaign are very clear.

Vicky Cosgrove, a resident of District 3, brought her rescue dog Sophie to protest Santos’ claim to have run an animal rescue called Friends of Animals United. No evidence has been found to support its existence as a nonprofit, and in fact, it’s been claimed that Santos raised money for animal rescues but never donated it.

“The congressman that is going to represent me is a liar,” Cosgrove said. “To get the Catholic vote out, he said that abortion is akin to slavery. He claims he has all this money. If he’s so against abortion, he should be able to adopt several children. But we know it’s not true. He doesn’t have the money to go to McDonald’s.”

Another question raised, in addition to “Where’s George,” was “Why, George?”

“If you run for public office, you have a why,” Lafazan said. “Some people want to make a difference on a specific issue. Some want to get involved in their community. Why George Santos ran, it’s clear that he ran simply to become famous. And he got his wish. Except I think he’s infamous.”