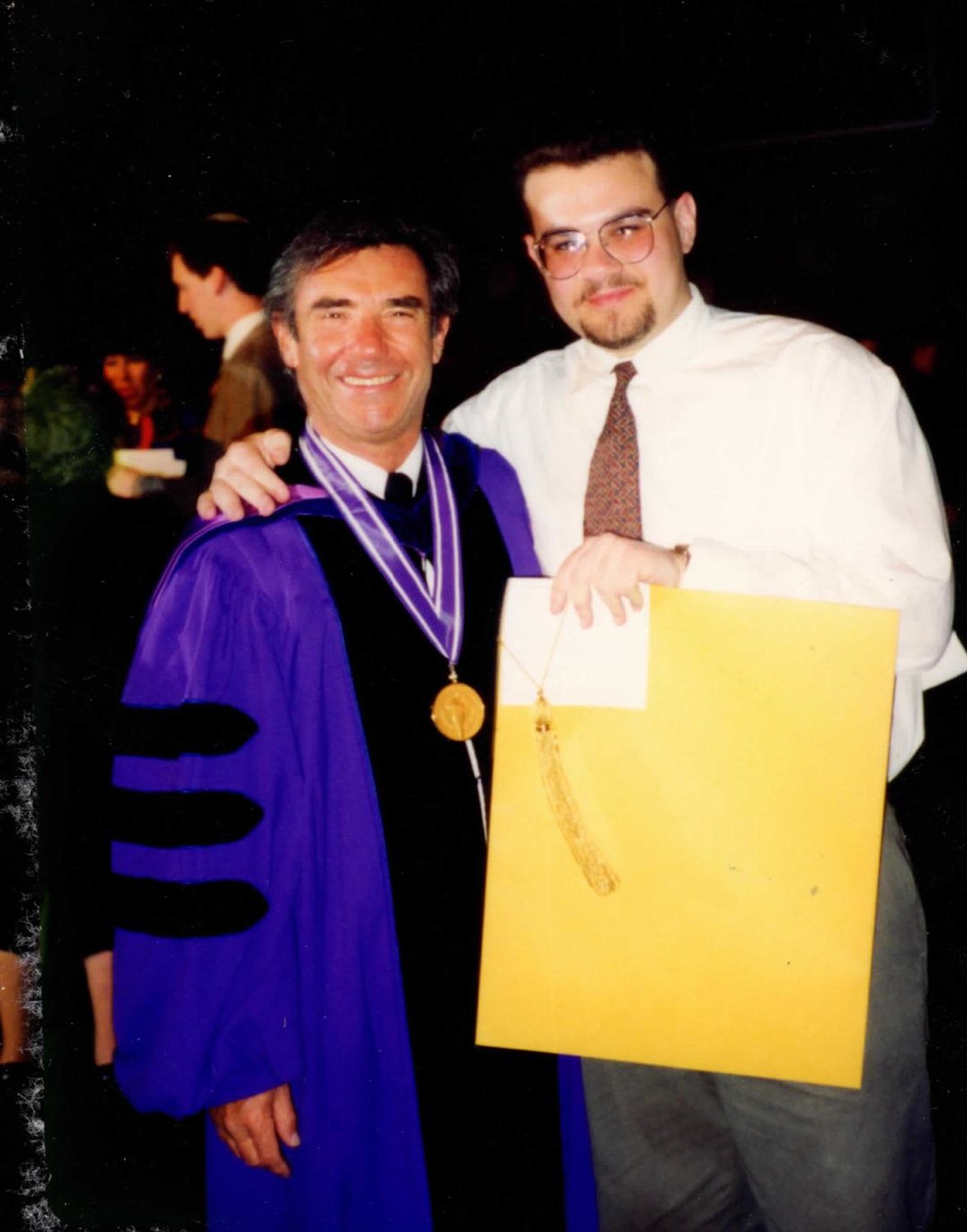 Joseph DiSalvo, right, created a film to honor his former professor, Bob Gurland, after he made a great impact on his life as a student at New York University.
Courtesy Joseph DiSalvo 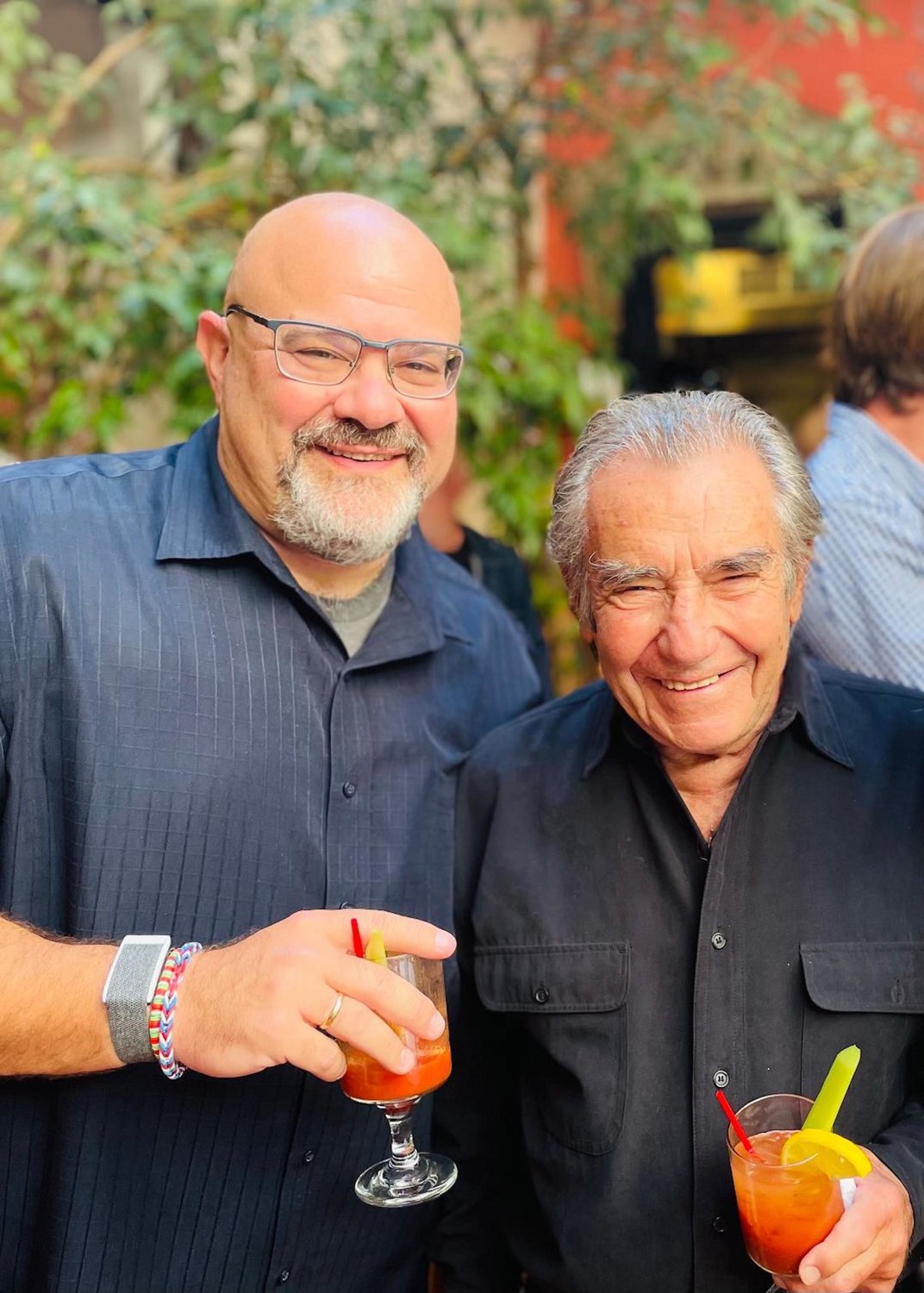 Joseph DiSalvo was taking a sample philosophy class at New York University in 1990 when he first met Professor Bob Gurland and felt immediately welcomed by his outer-borough Bronx accent. DiSalvo, a Rockville Centre native, recalled that he looked over and told his parents, “I am going to this school.” Thirty years later, DiSalvo is still close friends with his mentor and made a documentary “Bronx Socrates” in honor of his retirement after 65 years of teaching.

Gurland left NYU after serving as the baseball coach, faculty advisor for dorms and a teacher to over 25,000 students over many years.

“I didn’t want to waste students’ time,” Gurland said in the documentary. “I wanted to address things that I thought were important. I come into class with an agenda. If you walk out of my classroom at the end of the semester and you think the same way as you thought when you walked in, I get an F for the course.”

It bothered DiSalvo that the unexpected pandemic canceled the retirement celebrations planned in 2020, as Gurland was pushing 90 years old and DiSalvo felt that time was was of the essence. He created a production company, hired a freelance camera person he knew through a friend, and decided to make a documentary for the first time.

The idea came from the original plan to use NYU film students to shoot the festivities of the planned celebrations for Gurland’s retirement and have the film as NYU property to honor the beloved professor. The plans were called off, however, once the pandemic hit, so DiSalvo took it upon himself.

Gurland was DiSalvo’s first philosophy professor. “(He) had an unbelievable gift of making some of the more abstract and complex topics not only accessible to all these students in the college of arts and sciences, but relevant,” DiSalvo said, “and people walked out of there and understood the topics and why they mattered.”

Many students who took Gurland’s courses considered him their favorite teacher and some joined DiSalvo for interviews in the documentary.

“He started talking and it was riveting,” said Christine Vitrano, a former undergraduate student of Gurland’s. “The way I would describe it, he was up on his stage and we were all just completely fixated on him.”

In the documentary, Vitrano reflects on how many life lessons she learned from Gurland.

At the end of his career when he was teaching at the business school, Gurland asked DiSalvo to be a guest lecturer in a business school ethics and morality course as a former student who went into business successfully.  DiSalvo went on to become an adjunct professor for business at NYU which, according to him, was “the realization of a dream.”

The fall of 2019 was DiSalvo’s first semester teaching and Gurland’s last. DiSlavo called it “the perfect symmetry and the passing of the baton, however you would eloquently put it; the transfer of generations.”

Gurland taught elementary school math courses, philosophy and ethics and morality at West Point Academy. DiSalvo highlights this time in Gurland’s career in the documentary as it was a big part of Gurland’s life and career that DiSalvo felt was not as well known.

West Point picked Gurland to be a professor there after a morality scandal during the Vietnam War called for a new ethics program.

“He was able to do exceptional, remarkable things, not only at a typically liberal educational institution like NYU where he has that platform,” DiSalvo said, “but also at one of the most conservative educational military academies where he was not only embraced by the faculty and institutional administration, but celebrated for changing the trajectory of how those students get taught.”

DiSalvo said that point in Gurland’s career really shaped the story of the documentary, which he called “an exploration of the value of a great teacher and his impact upon the world.”

On April 30, DiSalvo hosted a private screening of the documentary for his friends and family in Brooklyn. It is still in post-production, but DiSalvo said he hoped to eventually  submit the documentary to festivals across the country. DiSalvo said creating the film was a positive project to put his time and energy into during the pandemic.