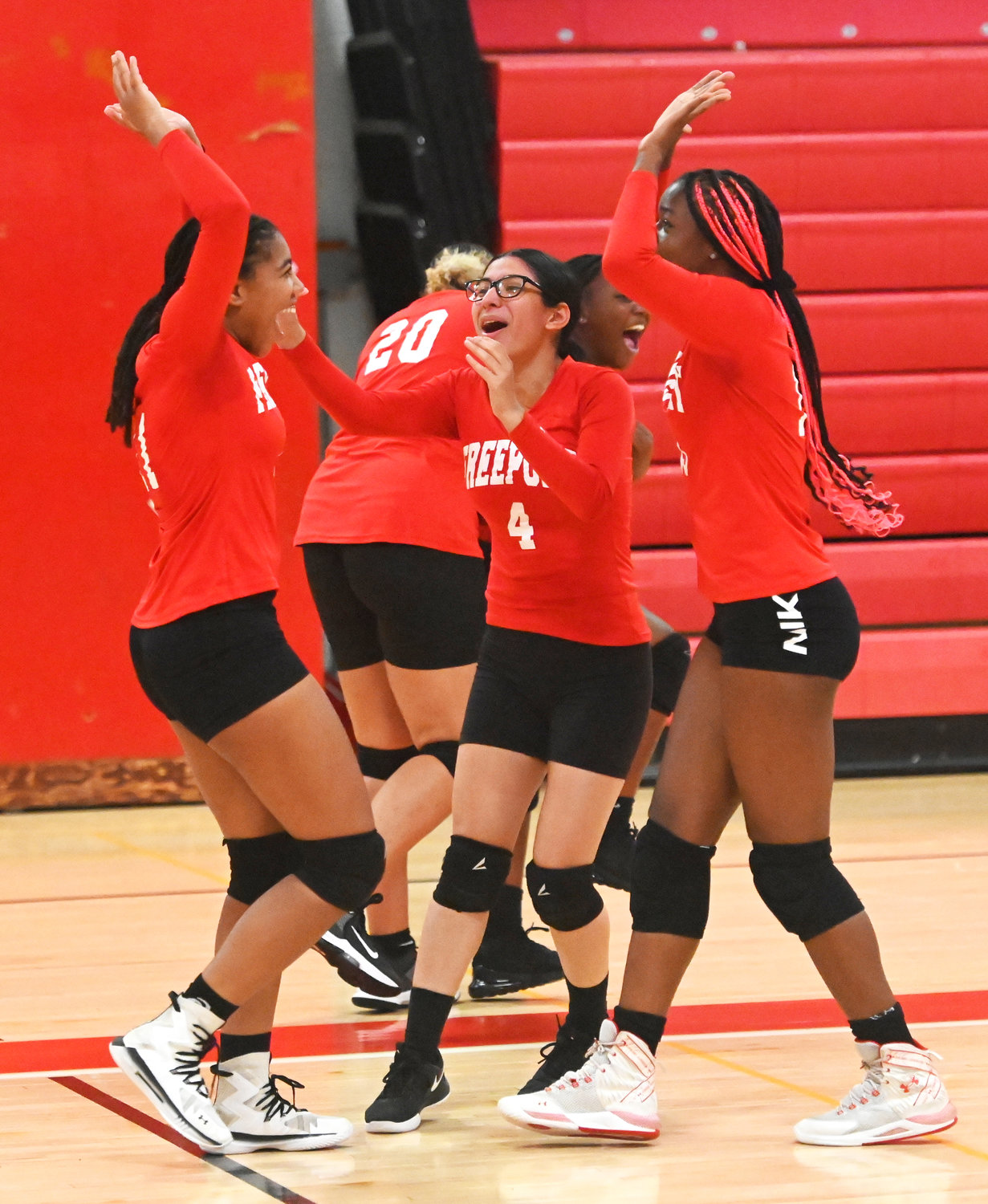 There's been plenty to celebrate for the Red Devils, who improved to 9-0 Monday night with a win over Malverne.
Donovan Berthoud/Herald
By Tony Bellissimo

Coming off a 13-win season and a trip to the Nassau Class AA girls’ volleyball playoffs, Freeport set a lofty goal this fall and is more than halfway to accomplishing it after sweeping Malverne on Monday evening, 25-14, 27-25, 25-17 to stay perfect atop Conference AA/B3.
The Red Devils, led by seniors Talia Gunter (24 kills, 5 blocks) and Tayla Baskin (22 kills, 5 service aces), improved to 9-0 and hold a two-match advantage over Malverne and Valley Stream Central with seven matches remaining.
“I want nothing more than to see these girls go 16-0 in the conference and put a banner on the wall, especially for the seniors,” said coach Lolita Beathea, who returned for a second stint leading the program. “We’re not afraid to talk about it, but we’re taking it one match at a time,” she added. “Tonight was one of our biggest challenges along with Valley Stream Central. Malverne battled and I’m expecting another tough match when we go to their gym in a few weeks.”
Malverne, which has 10 seniors, was led by libero Kristina Gray, Sarah Boubert and Xiang Chin. “We had too many missed serves against a good team and their middle hitters as well as their above-average serves created challenges for our defense,” Malverne coach Danish Nadeem said.
Gunter is a powerful right-handed hitter, while Baskin swings left-handed. Baskin served for 12 straight points in the opening set as Freeport set the tone for the night. However, the Mules responded in a back-and-forth second set and rallied from a 19-14 deficit after an incredible dig by Baskin using the tip of her toes to lead 25-24 before the Red Devils, with sophomore Khamiya Hudson serving, scored the final three points to win it.


“Soccer is my first sport and my instincts just kicked in,” Baskin said of her highlight-reel play in the second set. “We started to fall apart a little bit after the first set, but then we got it back together.”
Beathea said she liked what she saw from the Red Devils after Malverne nearly stole the second set. “It was good to see us fight back after being down,” she said.
In the third set, Freeport pulled away after the teams split the first 20 points. Senior setter Lisseth Gomez had a strong performance throughout the match and contributed big time in the third set along with senior setter Zaria Chaplin and junior Sejla Omeragic.
“Talia and Tayla are our driving force and feed off each other so well, but you can’t leave out anyone else because it’s a total team effort,” Beathea said. “We work hard on serving and playing together and having fun.”
Freeport’s also defeated Valley Stream Central twice, Locust Valley, Cold Spring Harbor, Lawrence, Uniondale, Hempstead and Westbury.
“Honestly we’re all friends and we like to laugh and make jokes,” Gunter said. “That’s a big reason why we’re successful on the court.”
Added Baskin: “Volleyball isn’t as popular as football or basketball around here, but it’s very important to us and we want to win the conference.”