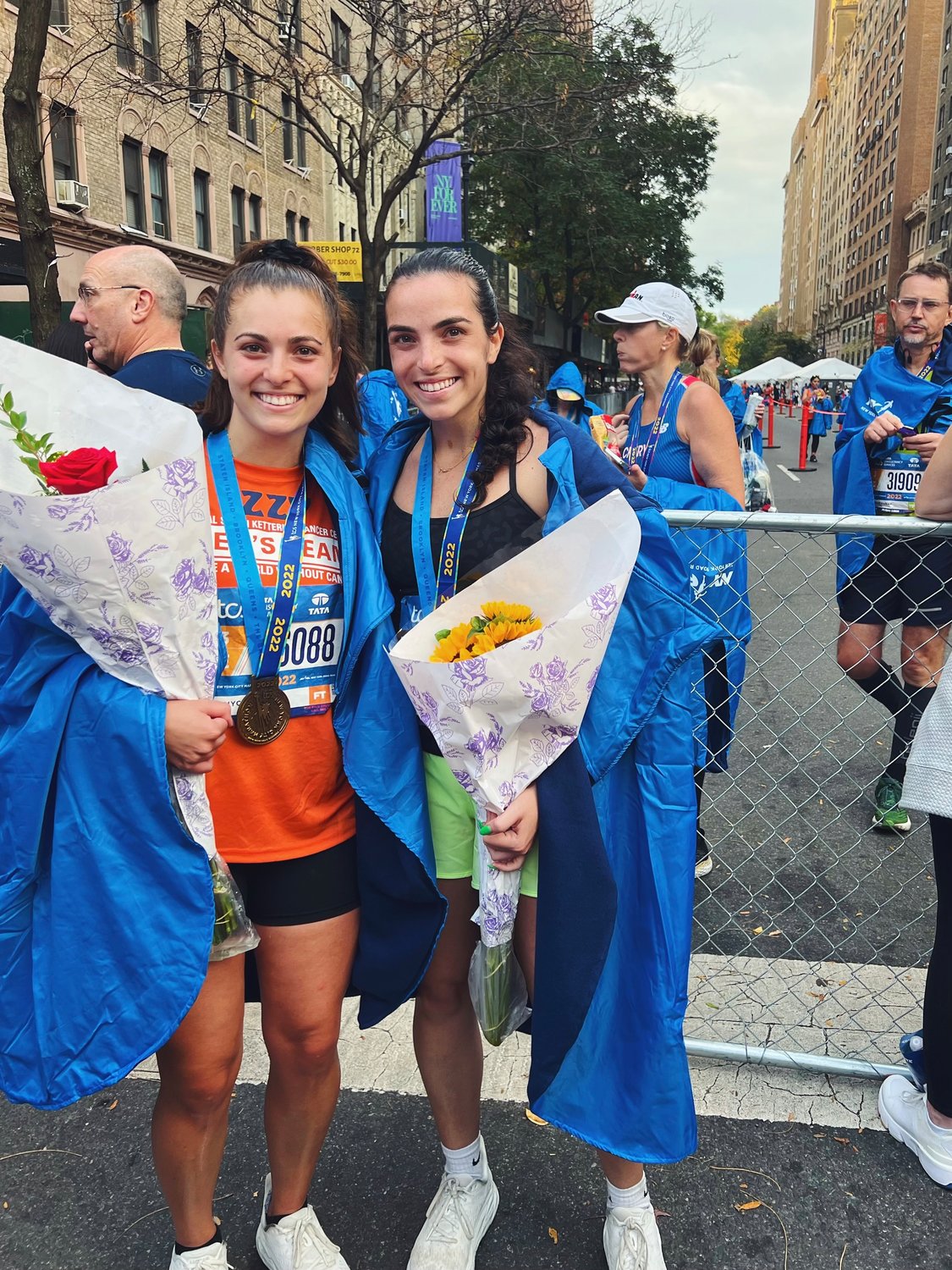 Isabelle Grillo, left, and her sister Sophia Grillo receive a warm welcome from friends and family members at the finish line.
Courtesy Sophia and Isabelle Grillo
By Daniel Offner

Considered the largest of its kind in the entire world, the New York City Marathon has become an annual tradition. Tens of thousands of people from all across the world gathered to run the 26.2-mile course across the five boroughs.

The course begins on Staten Island, where runners then proceed across the Verrazano Bridge into Brooklyn, Queens, the Upper East Side of Manhattan, and the Bronx before returning back towards the finish line in Central Park.

“It was a crazy weekend in the best of ways,” Sophia Grillo, 25, said. “It was one of the hardest things I’ve ever accomplished in my life.”

Sophia and Isabelle Grillo were among the 47,745 runners who completed the course this year, placing in 23,620 and 34,183 respectively, according to the results posted by the New York Road Runners.

She would take the lead on preparing their training regiment, which began in July with shorter distances, between seven and 10 miles, and gradually they advanced to longer distances of 12 to 14 miles, which they said became easier than the shorter distances and time went on.

“We never stopped doing these long runs,” Isabelle said. “With all the people there cheering us on it made it that much easier.”

Despite some unexpected weather at the start of the race, the sisters were able to rely on their athleticism to power them through the course.

Individually, they participated in other similar events, and together they managed to finish the New York City half-marathon, which took place back in March.

“We were well prepared for it,” Sophia said. “My sister and I do pretty much everything together. I don’t believe we’d be able to do it without each other.”

For the Grillo sisters, finishing the race had even more meaning this year, after having recently lost their grandfather to Covid. As an avid runner himself, their grandfather had completed the New York City Marathon in previous years and inspired them to do it too.

“He would have loved to have seen us cross the finish line,” Sophia said. “But we know he was with us through the entire duration.”

Sophia said that they miss their grandfather every day and that she wishes he could have seen them achieve their goal of completing the marathon.

“Running in the New York City Marathon was a dream come true. It has always been something we have wanted to accomplish,” she said. “Just the sense of community and the cheering of random strangers. It was an unbelievable experience.”

Isabelle and Sophia were greeted at the finish line by their parents, Emilio and Christine, and their brother, Lio, who traveled along the route carrying signs and posters to show their support.

Sophia and Isabelle said despite the intense level of training that was required and the difficulties that they encountered along the way, they would absolutely do it again.