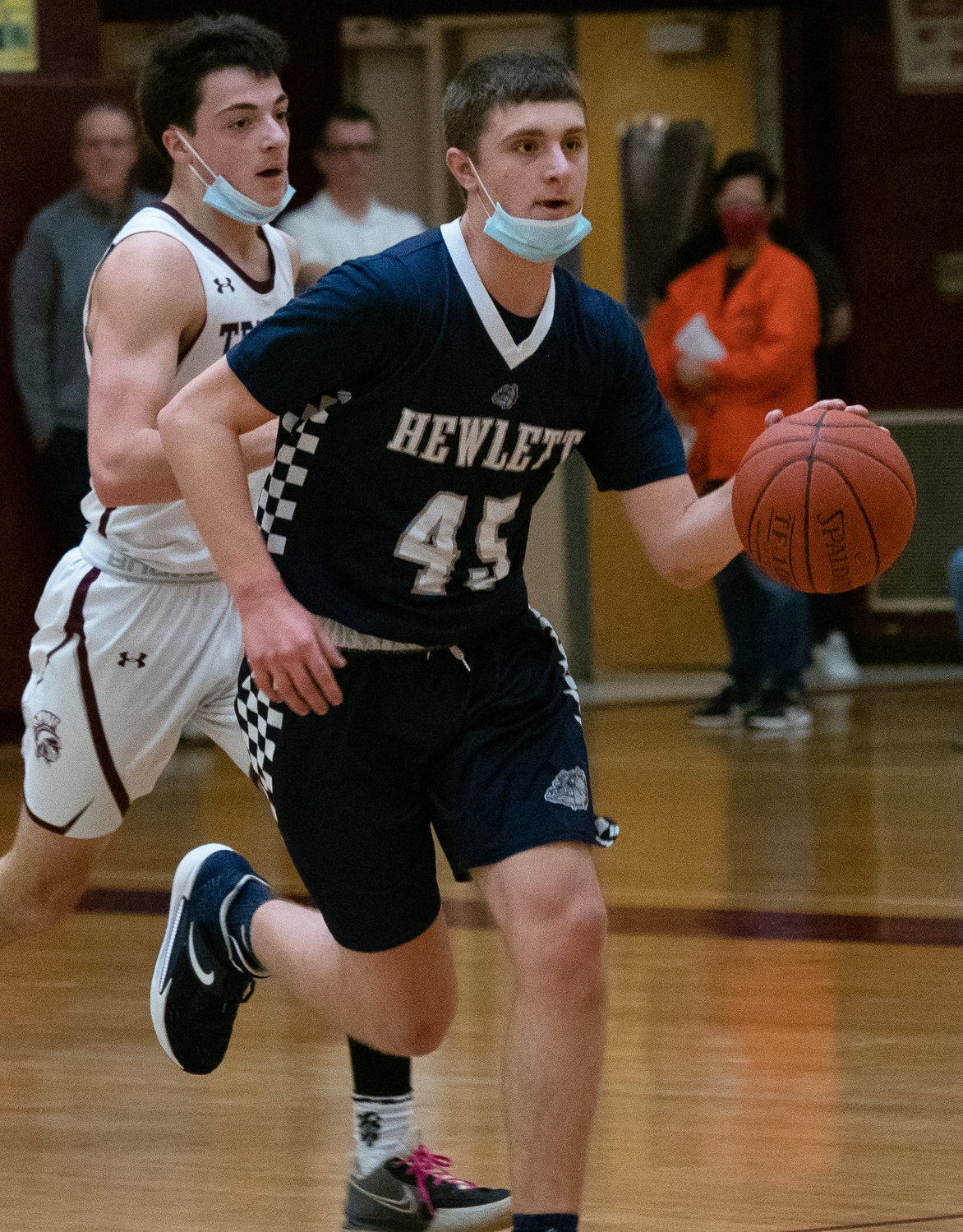 Junior Ryan Weiss poured in 46 points Feb. 18 to help lift the Bulldogs over Roslyn in double OT, 80-79, in a Nassau Class A playoff game.
Eric Dunetz/Herald
By Garrett D. Uribe

Ryan Weiss’s offseason calculation had paid off in spades.

But in the last half-minute of a second overtime period at Roslyn Feb. 18, the Bulldogs couldn’t rest on the junior’s recent statistical benchmark – they needed a half-dozen more free throws. Weiss – who also led Nassau with 27.5 points per game and 84 3-pointers – delivered, making six free throws in the final 30 seconds to send No. 11 seed Hewlett to an 80-79 double-overtime win against sixth-seeded Roslyn in the second round of the Nassau Class A playoffs.

“Ryan increased his repertoire this offseason” said Hewlett head coach Bill Dubin. “He improved on driving to the basket, and it showed. You don’t get so many free throws shooting only jump shots.”

Leading his team’s 19-of-21 performance from the foul line, Weiss – whose tying layup ended the initial overtime period – was 12 for 12 from the stripe en route to a season-high 46 points in Hewlett’s marathon win. Seniors Nick Morgan and Evan Greenberg added 13 and nine points respectively for Hewlett, which outscored Roslyn 18-5 in the fourth quarter to force extra frames. Morgan had a pair of late, clutch 3-pointers to go with Weiss’s game-high six treys.

“We’re a great fourth-quarter team,” Dubin said. “That’s from our conditioning at practice. Going into any fourth quarter, this team’s pretty confident.”

Confidence, in any quarter, would hardly be enough for Hewlett in the Class A quarterfinals Feb. 23 at No. 3 seed Garden City, as the Bulldogs – perhaps still lagging from their long night at Roslyn – failed to find a rhythm facing the Trojans’ standard zone defense, and fell 70-32 to the Conference A2 champions. “They shot well and we didn’t,” Dubin said. “[Garden City’s] defense wasn’t anything special. We just shot well below our average.”

Hewlett (14-8, 6-6 Conference A3) wrapped the regular season boasting the league’s second-leading offense, scoring 69.7 points per game and finishing fourth in A3 to reach the playoffs for the 16th time in 17 seasons. The Bulldogs had bounced nicely off a COVID-compromised 0-4 spring to start 6-0 this winter. “We lost a whole year last season,” Dubin said. “We weren’t permitted to do regular on-court activities. It took a while to regroup, but we did.”

“No one expected much from us in this tough conference,” Dubin said. “They said we’re a one-man team. But it’s a testament to these kids, quite a few stepped up and played good basketball. They bought in and made a success of the season.”