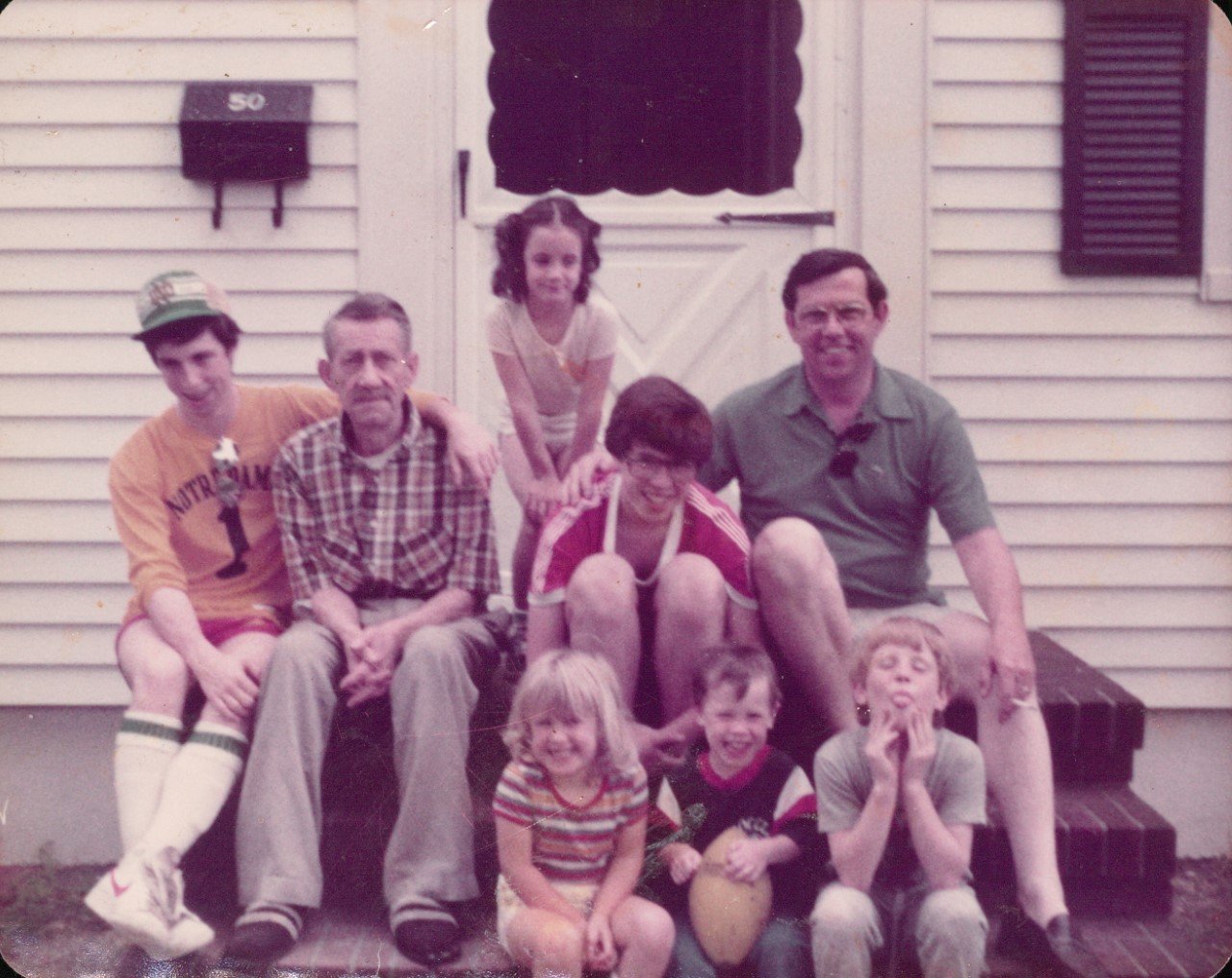 John Henry “Jack” Barthel, at right, with of his children.

John Henry “Jack” Barthel died peacefully on Dec. 30 after a short illness. He was 84.

Barthel was a longtime Rockville Centre resident and lived in Cutchogue at the time of his death.

Born in Brooklyn on Oct. 27, 1937, to Henry J. Barthel and Florence K. (nee Hanley), Barthel was a Flatbush kid who loved street games. He was particularly fond of his grandfather, “Pop” Hanley, who’d been a Lower East Side Irish orphan at the turn of the century, a ward heeler, and an FDNY firefighter.

Barthel was a loyal Dodgers fan and he frequently walked his younger brother, Tom, to Ebbets Field. Tom is now an author of several books on baseball and other subjects, and a retired college professor. During the summer, their father would hitchhike the family to the beach at Riis Park. During World War II, Barthel watched the U.S. Army exercise at the Brooklyn Parade ground, and on Victory in Europe Day, he waded through tickertape on Flatbush Avenue, holding his father’s hand.

He cherished his funny sister, Margaret, who predeceased him, and youngest brother, Henry “Hank,” a retired teacher and poet in Vermont.  The family moved to Farmingdale in 1949. Barthel’s father commuted to work on the Long Island Rail Road from Farmingdale each day and told his son that a person had three choices commuting on the railroad: to become great at cards, to become a drunk or to be well-read. His father chose the last option, as did Jack, who also read and commuted for most of his career.

While living in Farmingdale, Barthel helped his family by working a few jobs, caddying at Bethpage State Park (including a round for Tom Carvel, founder of the ice cream chain) and “chopping the heads of chickens” at one of the Island’s many poultry farms in Bethpage. He never ate much chicken after that.

He graduated from Farmingdale High School in 1954 and went on to the University of Notre Dame on an Air Force Reserve Officers Training Course scholarship, graduating in 1958. At Notre Dame, Barthel learned to love literature and moral philosophy as a student of Professor Frank O’Malley.

Barthel adored the Fighting Irish and rarely missed a football game. As an active alumnus, he edited a published book of his class’s reminiscences, “Echoes of ‘58.” After college, he served four years in the U.S. Air Force in Bangor, Maine, where he said, “There were two seasons: winter and the Fourth of July.” He was honorably discharged from service as a captain.

Barthel met Deidre “Dee Dee” O’Connor, the love of his life, at a St. Patrick’s Day party at Herman’s Restaurant on Route 110 in Huntington, in 1963. They married 18 months later, at St. Christopher’s in Baldwin. On their wedding day, he lifted her veil on the altar and said, “Hiya cutie.” Together;  they raised their family on Cambridge Street in a tight-knit community with many other large families.

In Rockville Centre, Barthel organized the block parties. Their lives largely centered around St. Agnes Cathedral, in which Barthel performed in loopy theatrical productions for charity with his dearest friend, Bob Morvillo, in the parish hall. At St. Agnes, he coached generations in CYO basketball teams and came to be known as “Captain Jack”. In his career, he worked many years in bond sales in Manhattan, and later in software sales.

In retirement, Barthel lived in Nassau Point, Cutchogue. Barthel was a calm, meditative, and contemplative family man always buoyed by his Catholic faith. He was kind and uncomplaining. He knew how to dance and how to give a toast. He was a wit and an inspiration. Most of all, with steady, quiet, and unwavering devotion, he loved his wife, family and religion.

Due to Covid-19, his funeral Mass was restricted to immediate family, but a public celebration of his life will happen when safety allows.