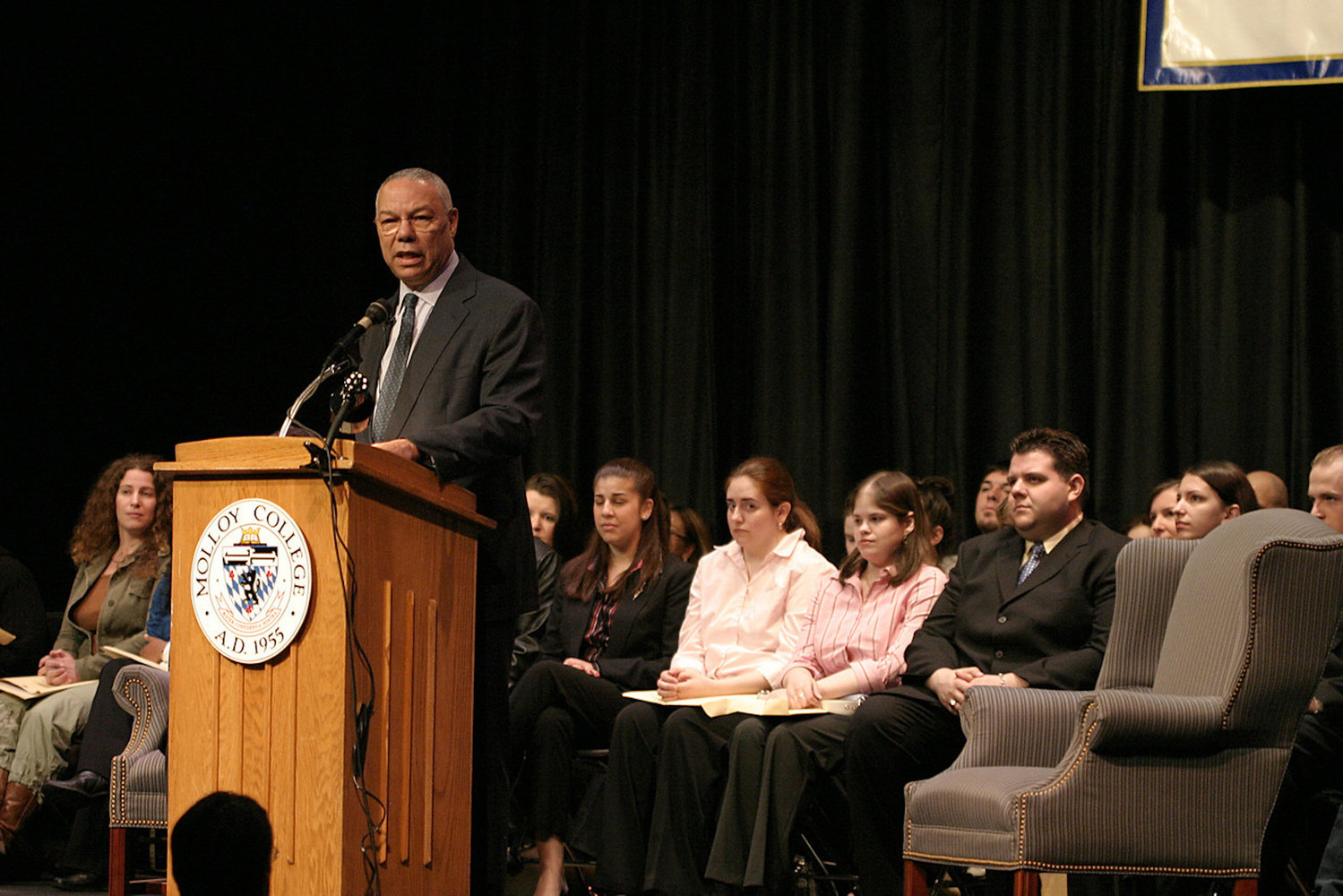 When then-Secretary of State Colin Powell visited Molloy College in Rockville Centre for a forum on April 29, 2005, he spoke to attendees about international affairs and expressed the importance of diversity across the world. Though he died on Oct. 18 at 84 from complications of Covid-19, many people who witnessed his speech still remember his message 16 years later.

“I think the thing that I liked, he talked about the country in general, he didn’t say the country was perfect,” said Ed Thompson, the college’s vice president for advancement, “but he did say we’re still the greatest experiment on the planet because our ideals are what’s important. It’s not necessarily the land, not necessarily the people, but it’s the ideals that we aspire to.”

Thompson helped facilitate Powell’s visit that spring day, and said he was touched by how knowledgeable Powell was about Thompson and the college, and by his message of the importance of diversity in the country, a sentiment that has only grown louder in the years after his speech.

Powell, a retired four-star general who became the country’s first Black secretary of state and chairman of the Joint Chiefs of Staff under President George H.W. Bush, appeared before a packed house at Molloy. He spoke to those gathered about international relations and how he was able to build himself into a success story despite coming from humble beginnings.

“He talked about the fact that he wasn’t rich, didn’t go to West Point, but that he was raised right and was raised about the ideals of service,” Thompson recalled. “He connected that to the type of student that was attending Molloy. Molloy modeled diversity and service and those are the things that we value at the college . . . all those things that we modeled, so did Colin Powell, so I think all those things helped our students.”

Before working alongside Bush, Powell rose up the military ranks and worked as U.S. national security adviser and deputy national security adviser for President Ronald Reagan in the 1980s. Powell served twice in Vietnam — during the first tour, he was wounded in action and on the second tour, he received the Soldier’s Medal for rescuing several men from a burning helicopter.

Thompson said he got to spend an hour one-on-one with Powell before his speech, and that he was taken aback by him. He said Powell was gracious, a good listener and offered him advice about how to be a strong leader, which included telling Thompson to “aggressively listen and take in data, but not too much,” Thompson recounted, noting that Powell told him not to wait on “perfect data” before making leadership decisions.

“People see us as sort of a nursing, education college, but in fact, our mission was really to talk about issues that were regionally and nationally important,” Thompson said. “ . . . When there’s a chance to really get personal, hands-on explanations of what’s going on in the world, we see ourselves as a place that can provide that type of access to our friends and neighbors.”

Thompson said he respected Powell because, though he was a Republican, he had no fear in crossing the political aisle if it aligned with his ideals. He called him a champion of diversity and a gracious man who was willing to compromise when he had to.

“I think his legacy, for me, is one of service against all odds,” Thompson said. “A diverse, Black soldier in Vietnam rises through the ranks to become one of the preeminent statesman of his time, so that speaks to his perseverance, and speaks to how America changed. He was symbolic about how America became more diverse and open to equality and excellence, so I think that’s his legacy.”