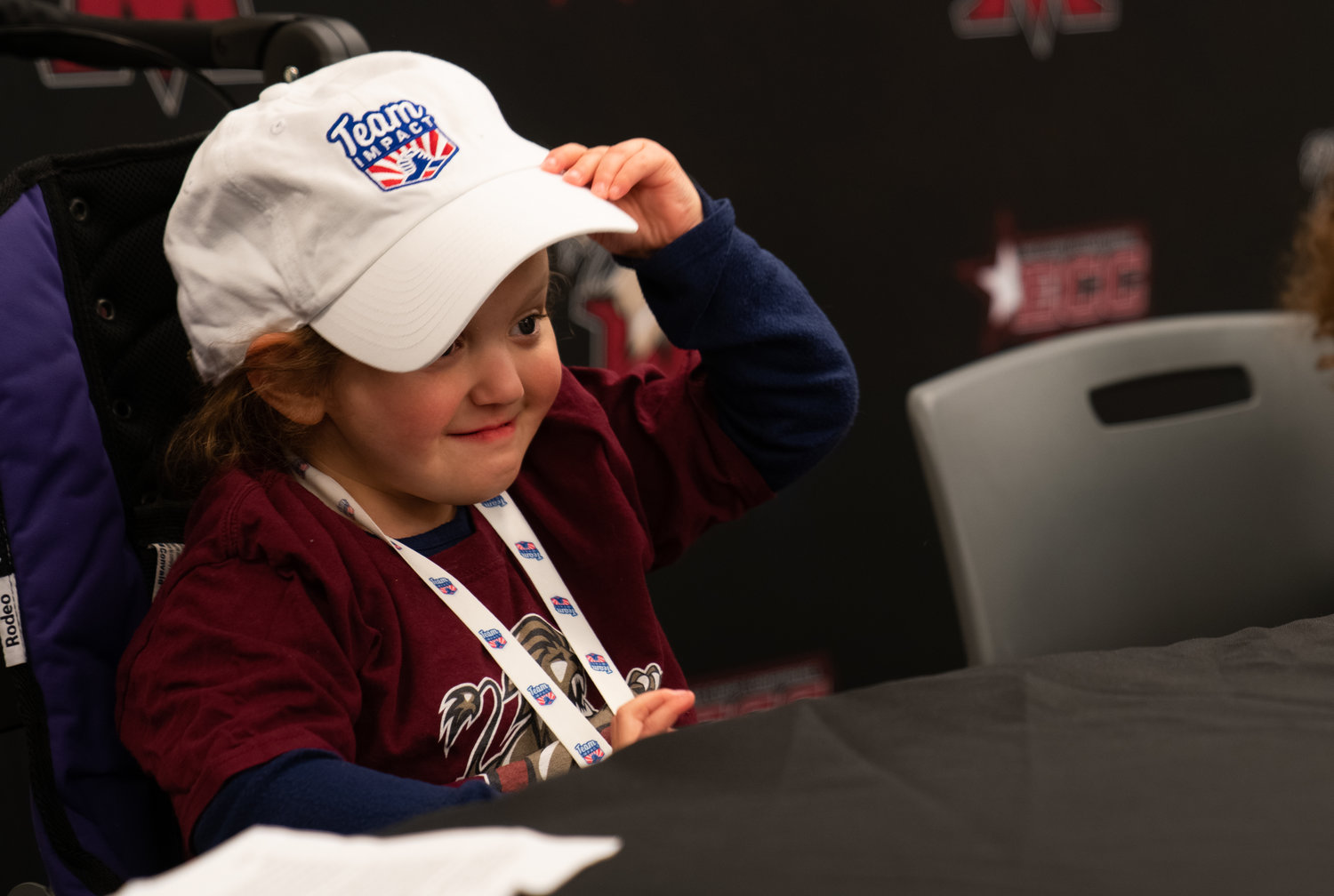 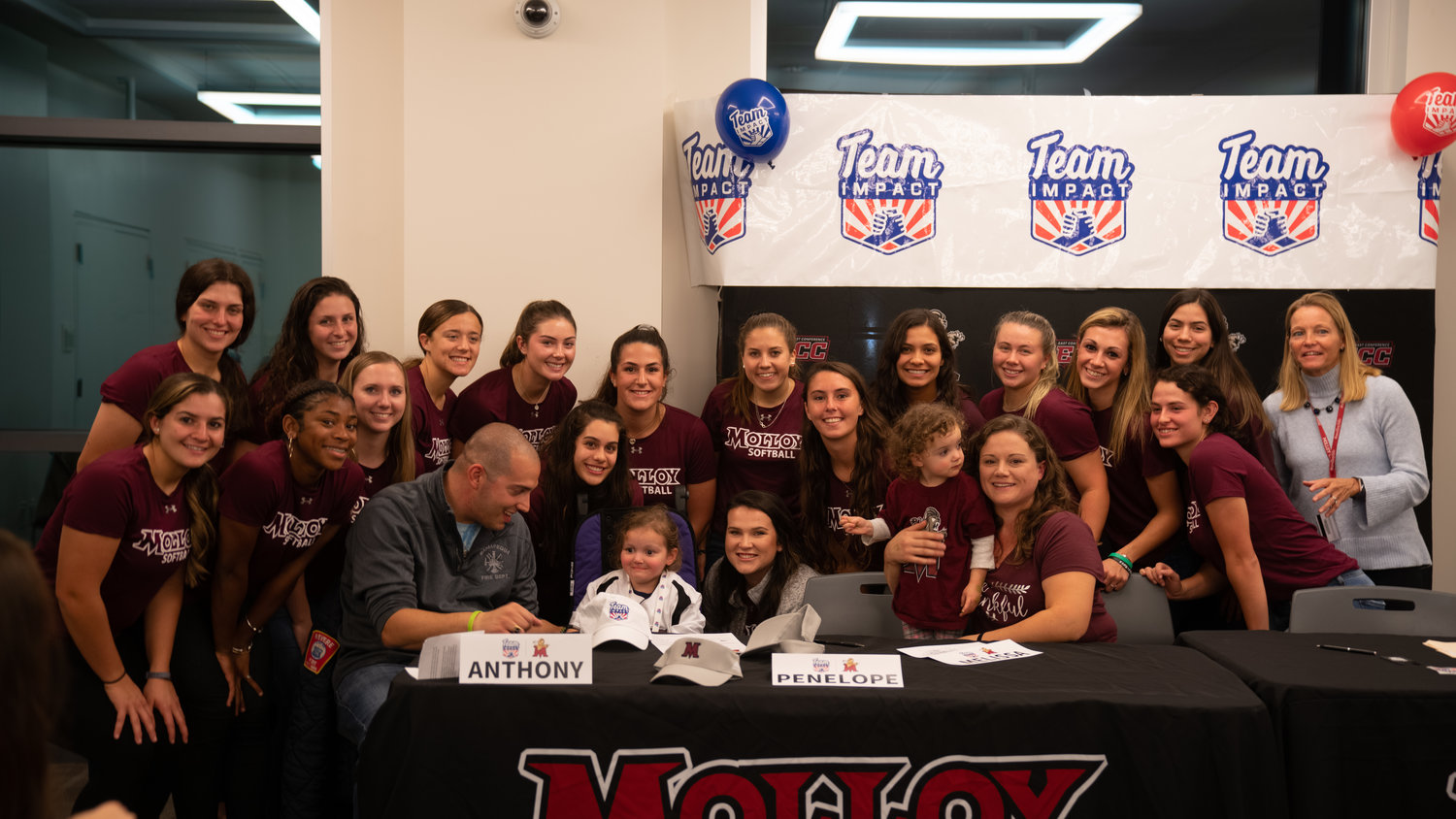 Penelope DiChiara and her family with the Molloy softball team.
Courtesy Frank Oliver
Previous Next
By Jill Nossa

A young girl has been given a special role on Molloy’s softball team. On Oct. 29, the team drafted 5-year-old Penelope DiChiara for an honorary position for the 2020 season, giving her a chance to have an experience she might not otherwise be able to have. Penelope and her family attended a Draft Day Ceremony at Molloy, where she signed the contract to be a part of the team.

Penelope, of Massapequa, has a genetic disorder called Emmanuel syndrome and suffers from limited mobility. Molloy partnered with Team IMPACT, an organization that works with college athletic programs to place children with serious illnesses in roles on collegiate athletic teams in order to provide these children with a support system and unique experience.

Penelope’s father, Anthony DiChiara, learned about the organization over the summer and thought it sounded interesting.

“I thought this was something interesting, an opportunity for Penelope to be in that world,” DiChiara said. “We don’t know what the future will hold and don’t focus on what she won’t be able to do. This is something cool she can be involved with and provides another support system.”

He applied and within a week, the family was contacted by Team IMPACT. The process of searching for a match began, soon leading him to Molloy. DiChiara said that the attitude of Molloy’s softball team members was what drew him to the team.

“They were so enthusiastic and Penelope really responds to enthusiasm,” DiChiara said. “She thrives from attention and she’s reciprocating it to them.”

Emmanuel syndrome is a chromosomal disorder that disrupts normal development and affects many parts of the body. Penelope has been through a lot in her young life, undergoing five surgeries for a cleft palate before age 2. The syndrome itself has caused “global developmental delays,” according to DiChiara. She uses a wheelchair and though nonverbal, he said she finds ways to communicate and get her point across and makes it obvious when she recognizes people.

“She lights up when she sees the team,” he said.

Being a part of the team means that Penelope can attend any game during the season, based on the family’s schedule. She was given a uniform and as part of her team duties, she will be on the sidelines for games and practices, serving as a source of inspiration for players.

“There’s a lot of stress involved in being a student athlete and it’s difficult to find a balance,” Susan Cassidy-Lyke, Molloy’s athletic director and coach of the softball team said. “So just looking at Penelope, remembering the obstacles she has to overcome and seeing that she still has a smile on her face, should give them inspiration and remind them that they’re doing this for Penelope.”

Cassidy-Lyke said the college had been trying to get involved with Team IMPACT for several years, but Penelope is the first “match” that has worked out.

“The team was very excited about it and eager to meet Penelope,” Cassidy-Lyke said. “Since meeting her, they’ve developed a great relationship.”

The team members and DiChiara family attended a volleyball game together and the team participated in a 5K at Penelope’s school. Molloy’s softball season doesn’t start until February, but between now and then, Cassidy-Lyke said they will do as much as they can to support Penelope and keep in contact to strengthen the bond and make her feel more comfortable, which the family appreciates.