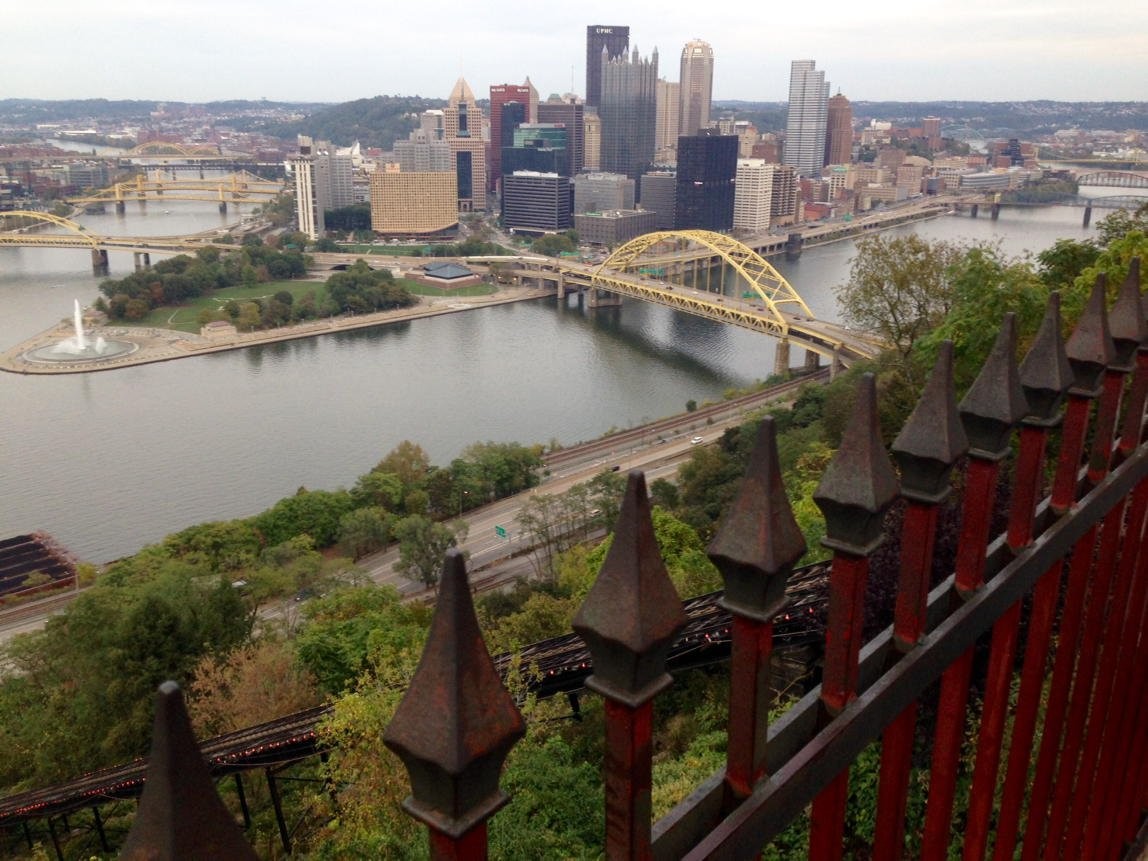 A view of Pittsburgh from above.
Scott Brinton/Herald 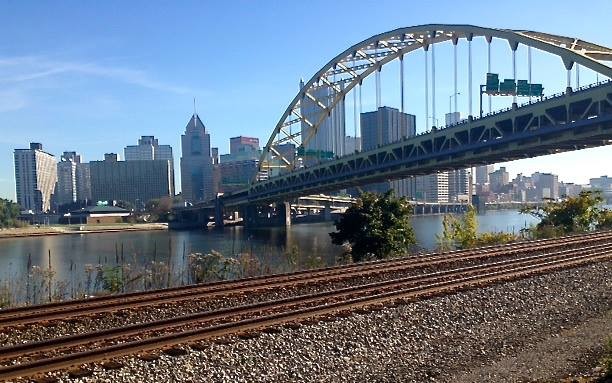 Bridges fan out from Pittsburgh's downtown in nearly all directions.
Scott Brinton/Herald 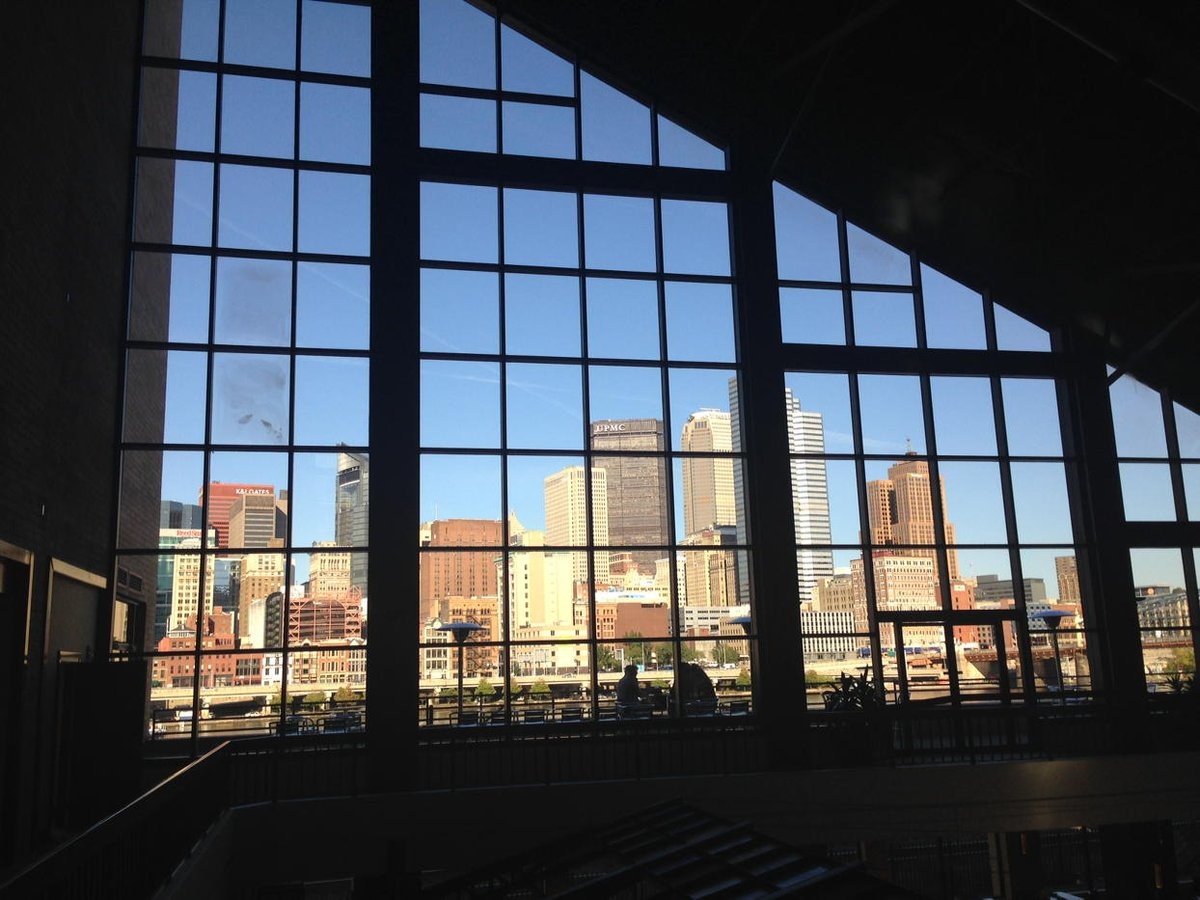 A view of downtown Pittsburgh from the Sheraton at Station Square.
Scott Brinton/Herald 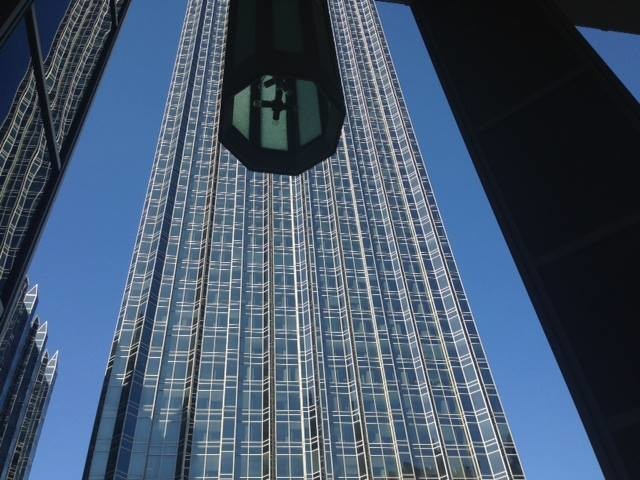 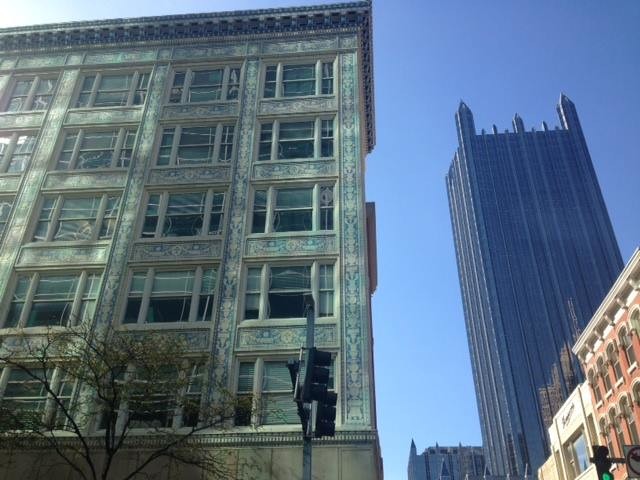 Yet, the city maintains its 19th-20th century charm.
Scott Brinton/Herald 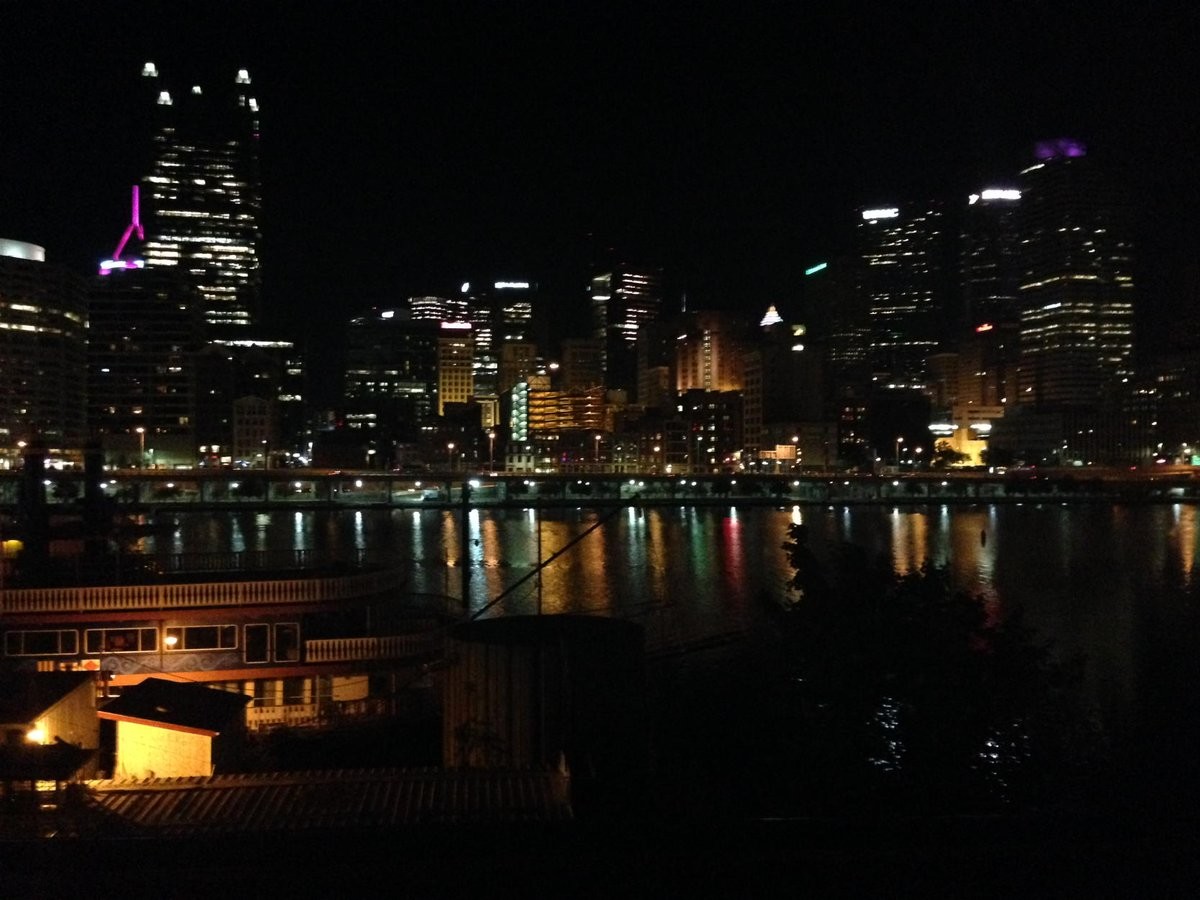 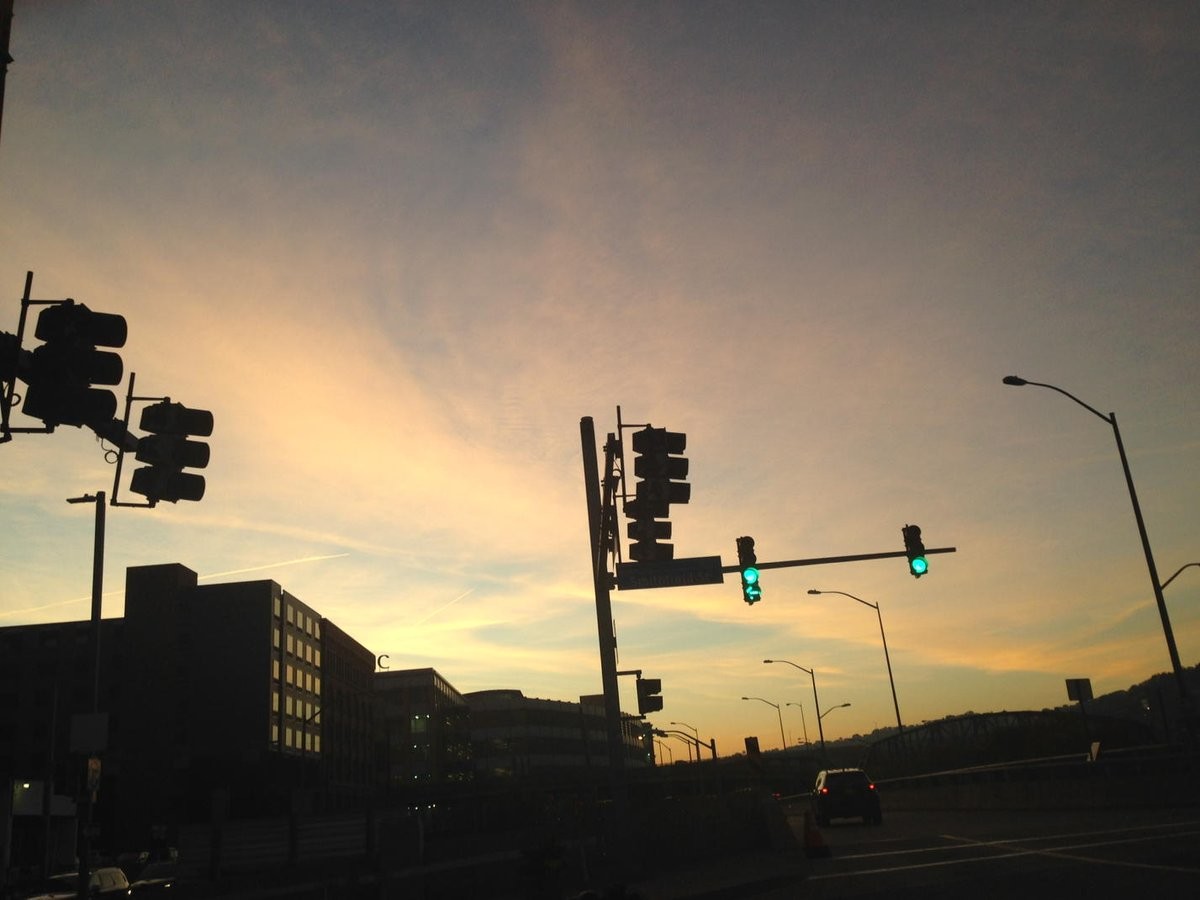 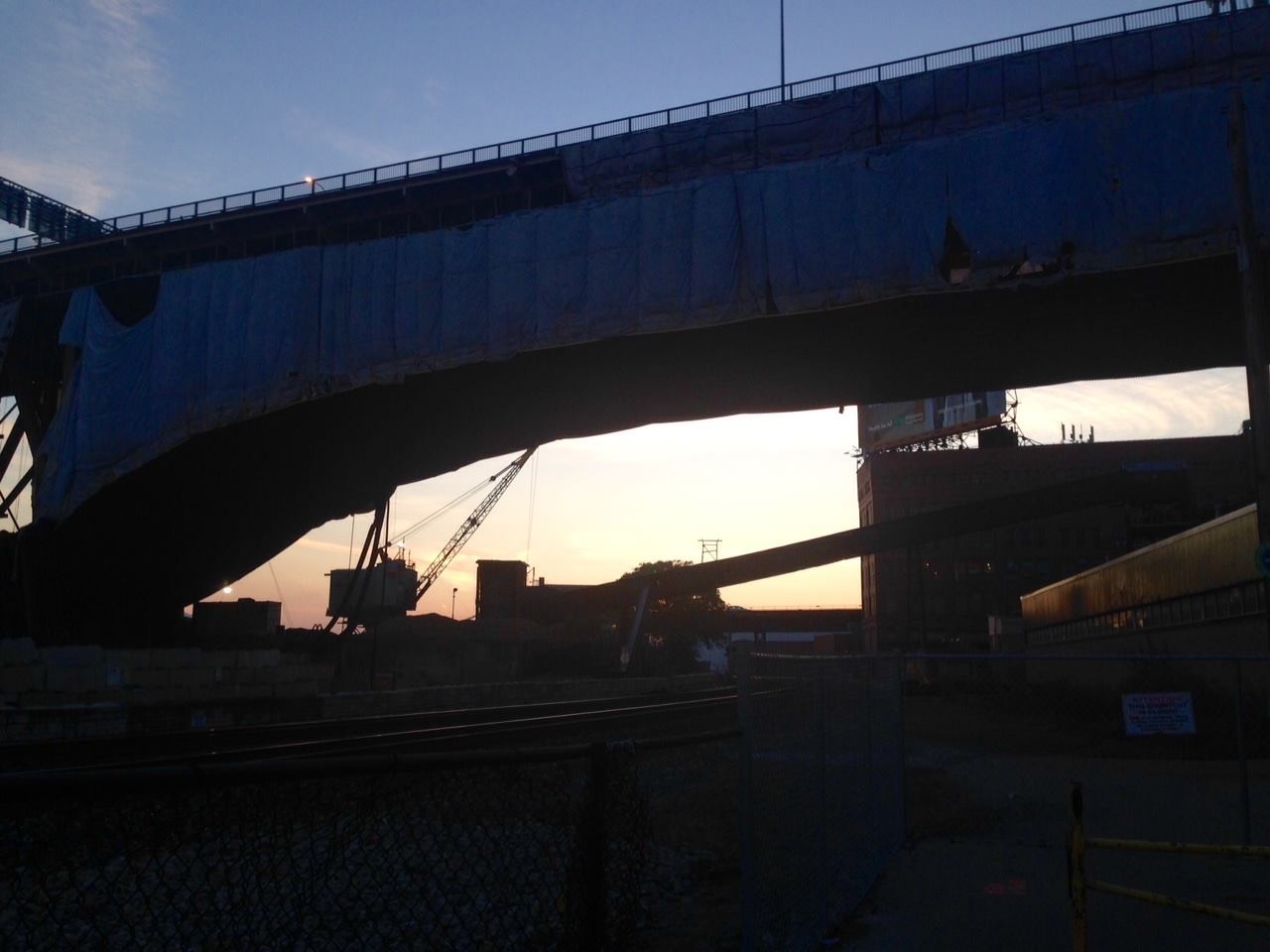 An industrial section of the city, just across the Monongahela River from the downtown.
Scott Brinton/Herald 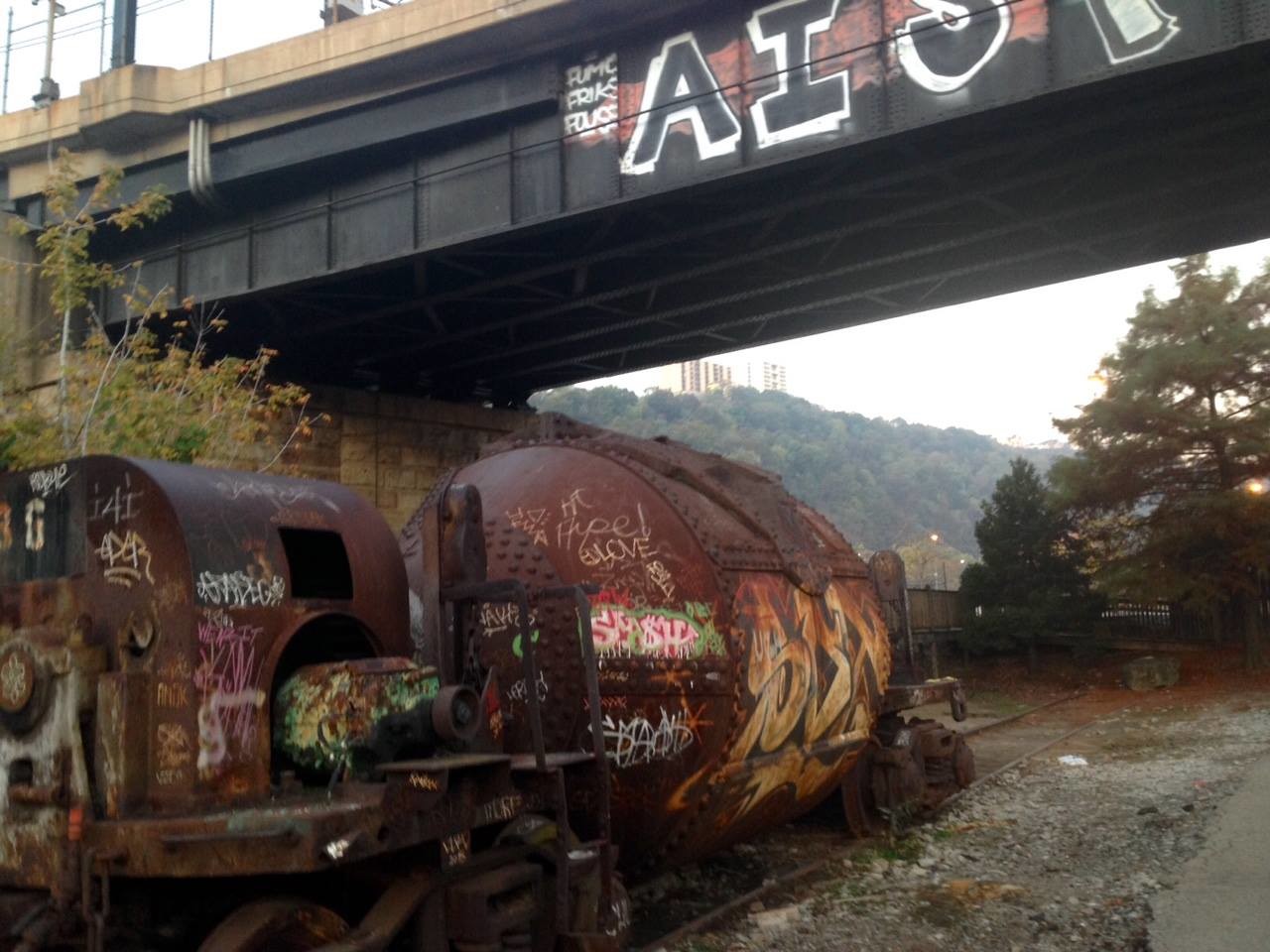 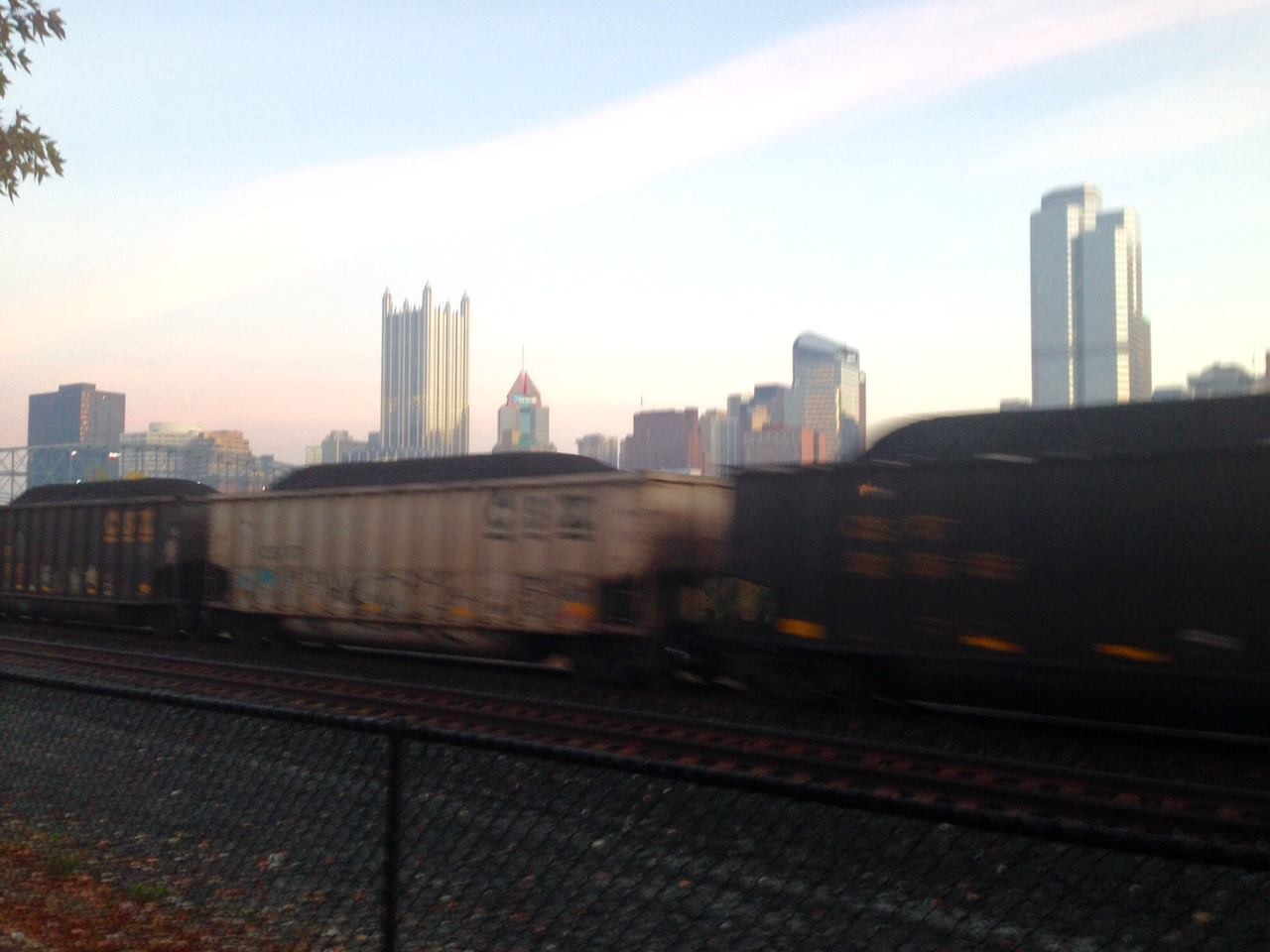 Coal has long defined the Pittsburgh region. Above, a coal train rumbles by, across the Monongahela from the downtown.
Scott Brinton/Herald
Previous Next 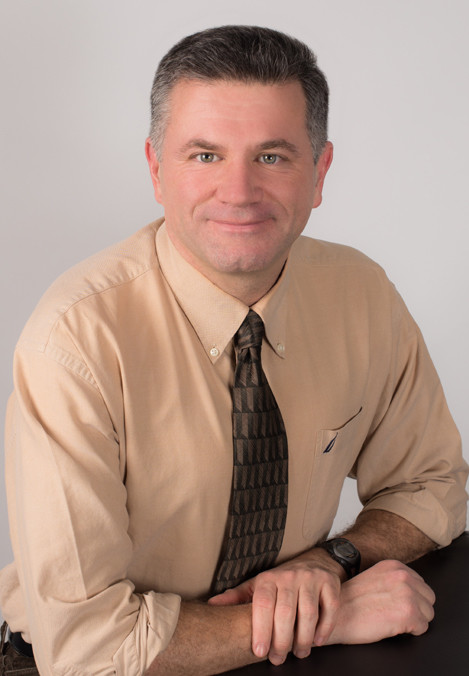 The public bus dropped me at a dirt patch seemingly in the middle of nowhere. In front of me, on the other side of a four-lane highway, was a wide river. Behind me was a tree-covered escarpment. Pittsburgh was nowhere to be seen.
The driver had assured me that this was the right stop, but I was feeling increasingly uncertain. I hadn’t mapped out my route from the airport to the city. I had time to kill, so I just winged it for the fun of it.
I got off with a family comprising a dad in his late 30s or early 40s, clad in a faded Steelers sweatshirt and jeans, his smiling daughter of about 10 and his doting mother. I had no idea where I was, so I followed them across a footbridge, clueless as to where I was headed. On the other side, I caught my first glimpse of Pittsburgh in the distance, its steel-and-glass skyscrapers shimmering in the sun, its many bridges radiating from the downtown like massive fan blades.
It was not the city I had imagined it to be.
Where were all the factories belching acrid smoke? I wondered. That had long been the image of the Steel City that I carried with me, and I’m ashamed to say, that was about the extent of it. Before me, however, was a state-of-the-art metropolis, considerably smaller than New York, but just as sleek. It was, in a word, beautiful.


I recently traveled to Pittsburgh to attend the Ted Scripps Leadership Institute, hosted by the Society of Professional Journalists and the Scripps Howard Foundation. The Press Club of Long Island sent me. Thank you, PCLI! I was grateful to spend time talking shop with journalists from not only the Northeast, but the Midwest and South as well. I was equally grateful for the opportunity to experience Pittsburgh up close. I had long wanted to see the city. I wasn’t disappointed.
I walked along a bike path to the Sheraton at Station Square, where the institute was held. The magnificent Monongahela River was in full view all the while. I was immediately struck by a long coal barge chugging southeast along the waterway. It was a strange sight. Coal, to my mind, is a 19th- and 20th-century energy source. Yet there was this barge — with dirty, black coal piled high — steaming past a modern mecca. I had trouble squaring the two images.
I quickly realized the degree to which coal has defined Pittsburgh and the surrounding region. Throughout the weekend, coal barges made their way up and down the Monongahela.
On the conference’s second day, I strolled around the city before the sun rose. Pittsburgh’s streets were quiet and virtually empty at that time of morning, around 6. I noted the numerous coal barges lining the riverbanks, presumably moored there to give their crews an overnight respite.
The next day, I walked south along the bike path. Orange sunlight bathed the city. Cyclists atop pricey carbon-fiber bikes sped past me, and joggers ran by in small groups, chatting at breakneck pace. The path abruptly ended at the edge of an industrial section of the city. I forged ahead, surrounded by aging bridges and decrepit factories, some of which looked abandoned. Two rusty, graffiti-stained train cars sat amid it all, motionless, seemingly makeshift monuments to Pittsburgh’s past.
As I returned to the hotel, I heard a train horn blaring in the distance. I was startled when the train rumbled past, each of its dozens of cars full of coal, which, I later learned, could not be covered for fear that it might spontaneously combust.
Pittsburgh, I concluded, is a city in transition. It is rapidly moving into the 21st century. Yet in many ways, it remains an old-school industrial center.
Like so many Rust Belt cities, it fell into a depression in the 1970s and ’80s. People left by the thousands. Since 1950, Pittsburgh has lost 56 percent of its population, down from 676,000 back in the day to a little more than 300,000 now.
In the 1990s and 2000s, a miracle happened, however. The city never went bust — at least not entirely, as was the case in Detroit. Attracted by cheap real estate and state grants, major financial firms and technology start-ups moved in, and along with them came young urbanites in search of their fortunes. The mass exodus of people slowed to a trickle.
Carnegie Mellon University and the University of Pittsburgh became centers of the city’s tech-fueled renaissance. Gourmet bistros started popping up. The indie music scene exploded. Whole swaths of the city were gentrified, and many working-class folks moved to the rural corners beyond the city’s “destination” suburbs and exurbs.
Pittsburgh survived and, it appears, is beginning to thrive again, but not all are happy about the economic and cultural mega-shift the Steel City has experienced over the past 30-plus years. Many are downright angry.
Pittsburgh, you could say, is a metaphor for America.


Scott Brinton is the Herald Community Newspapers’ executive editor and an adjunct professor at the Hofstra University Herbert School of Communication. Comments about this column? SBrinton@liherald.com.
Report an inappropriate comment