Board of Education's decision met with community backlash 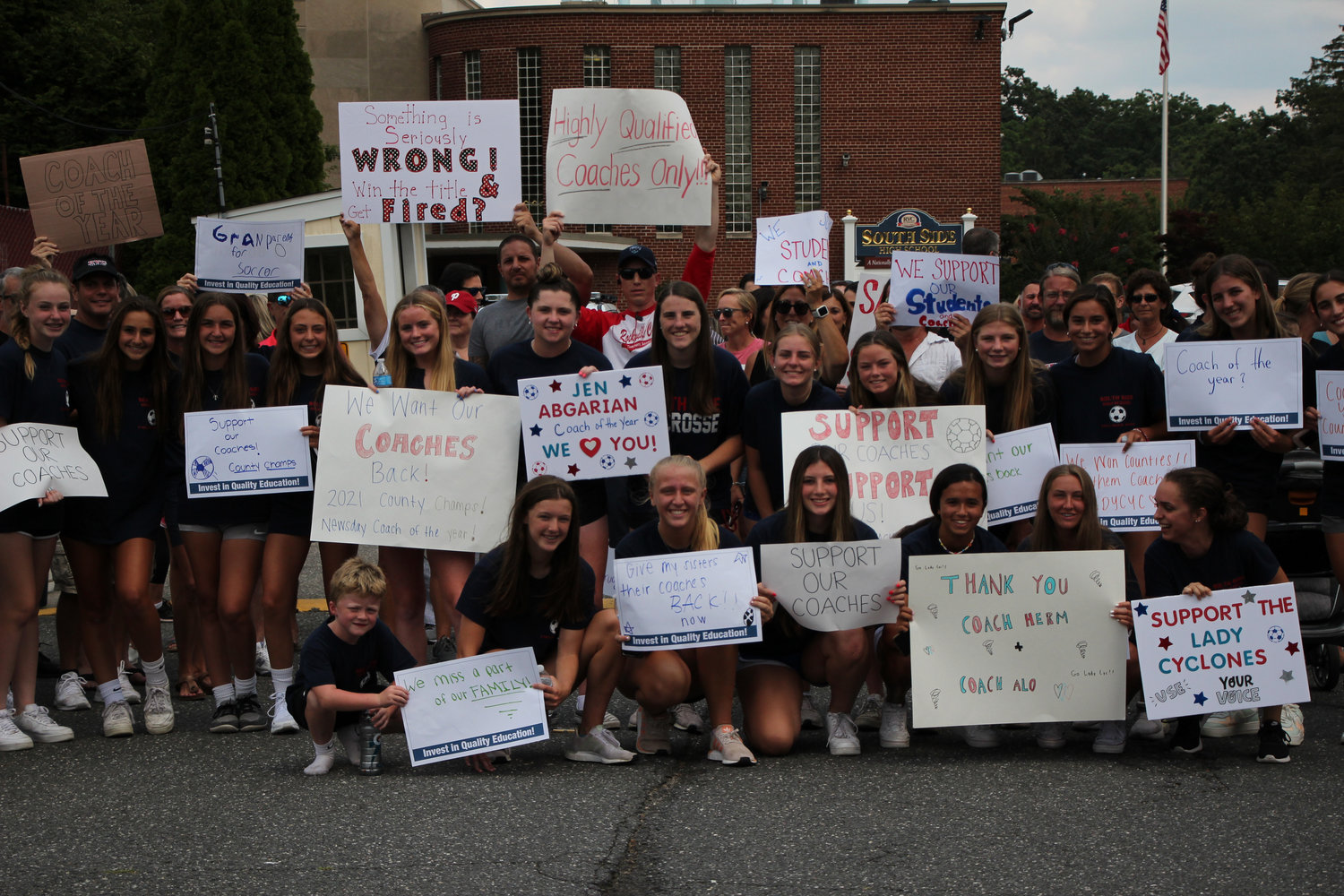 Student-athletes, teachers, coaches, students, parents and community members gathered just outside of South Side High School on Wednesday to protest the Board of Education's decision not to rehire girls’ soccer coach Jennifer Abgarian and assistant coach Chris Aloisi.
Theresa Press/Herald 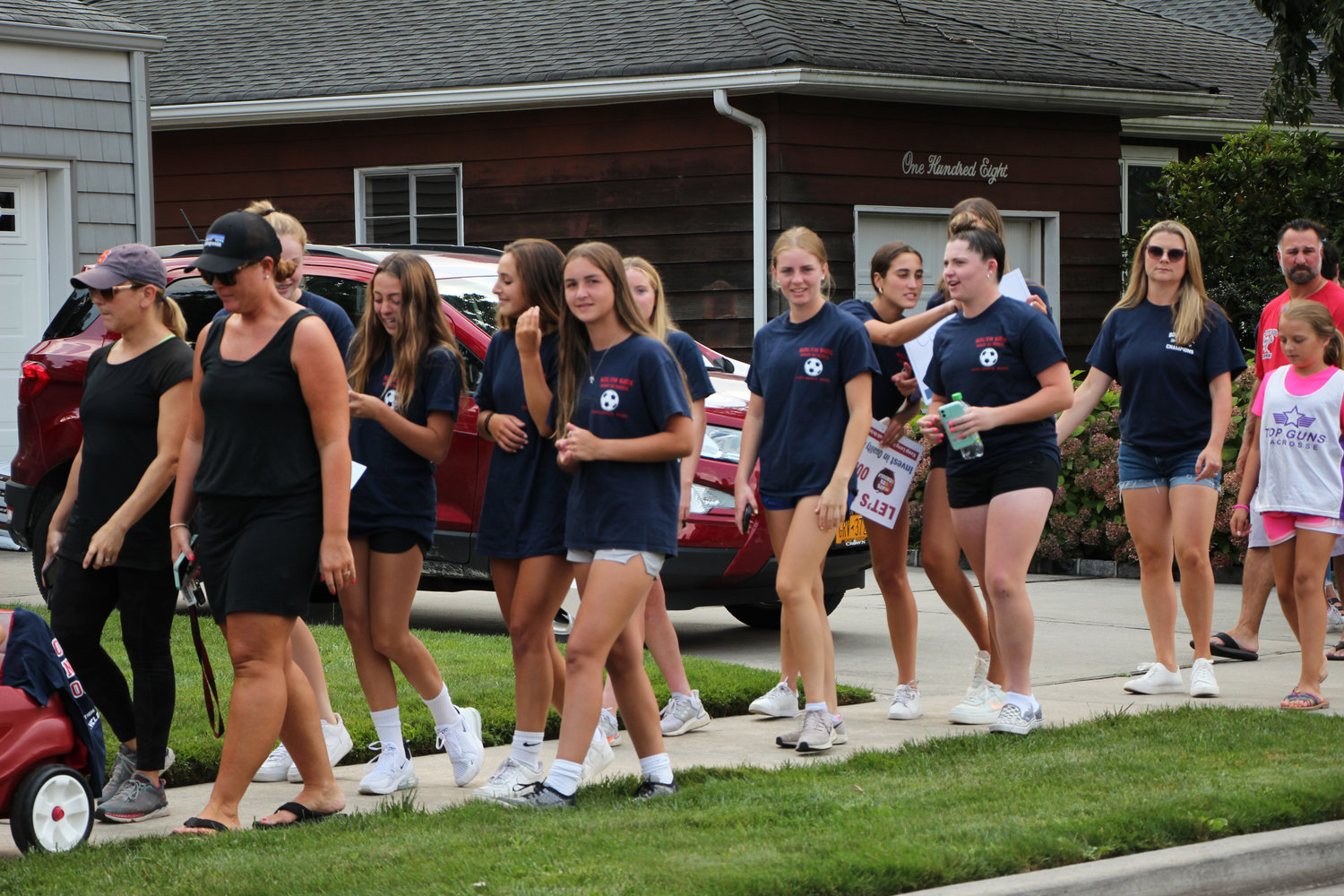 Members of the Cyclones girls' soccer team marched during the rally in support of their former coaches.
Theresa Press/Herald 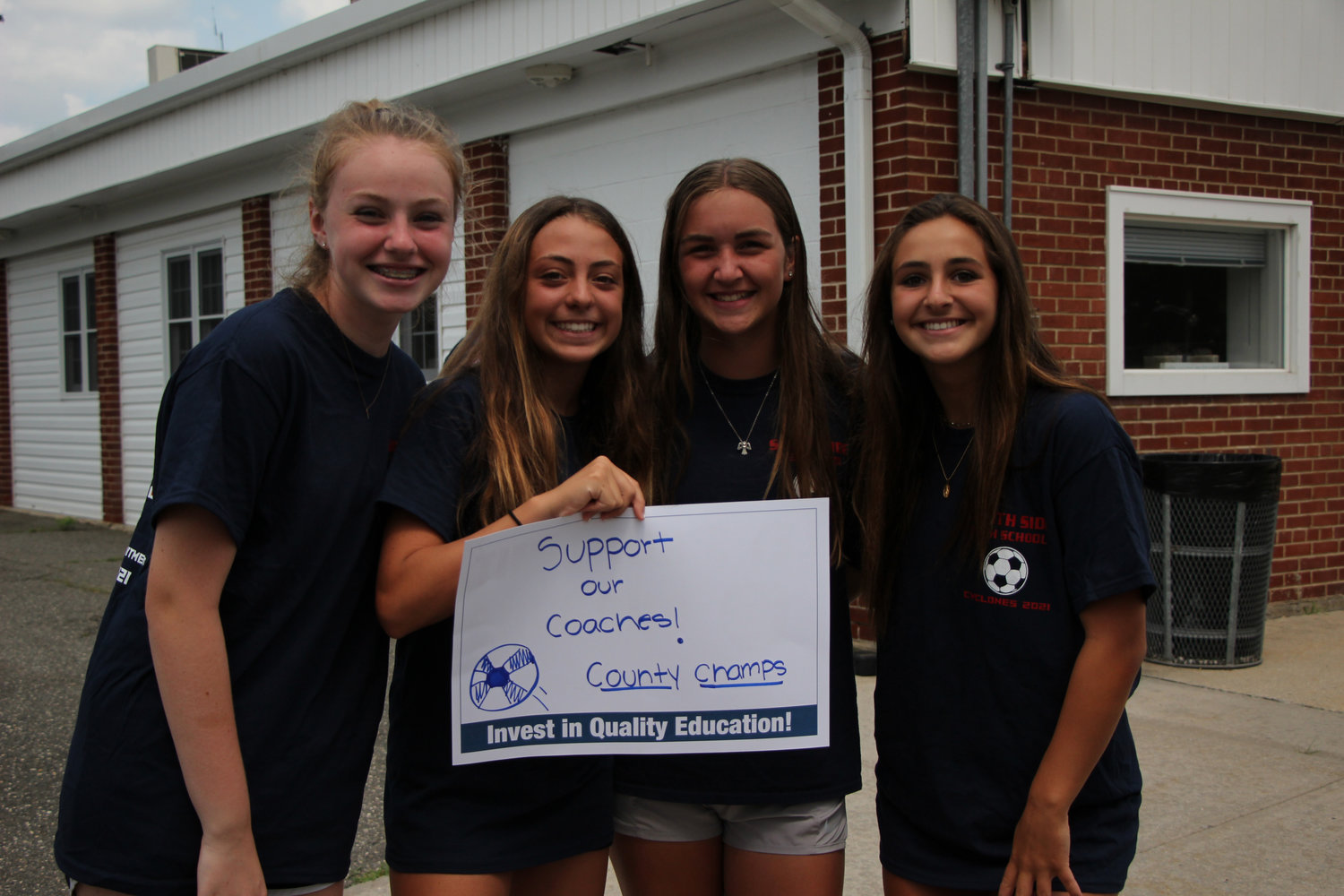 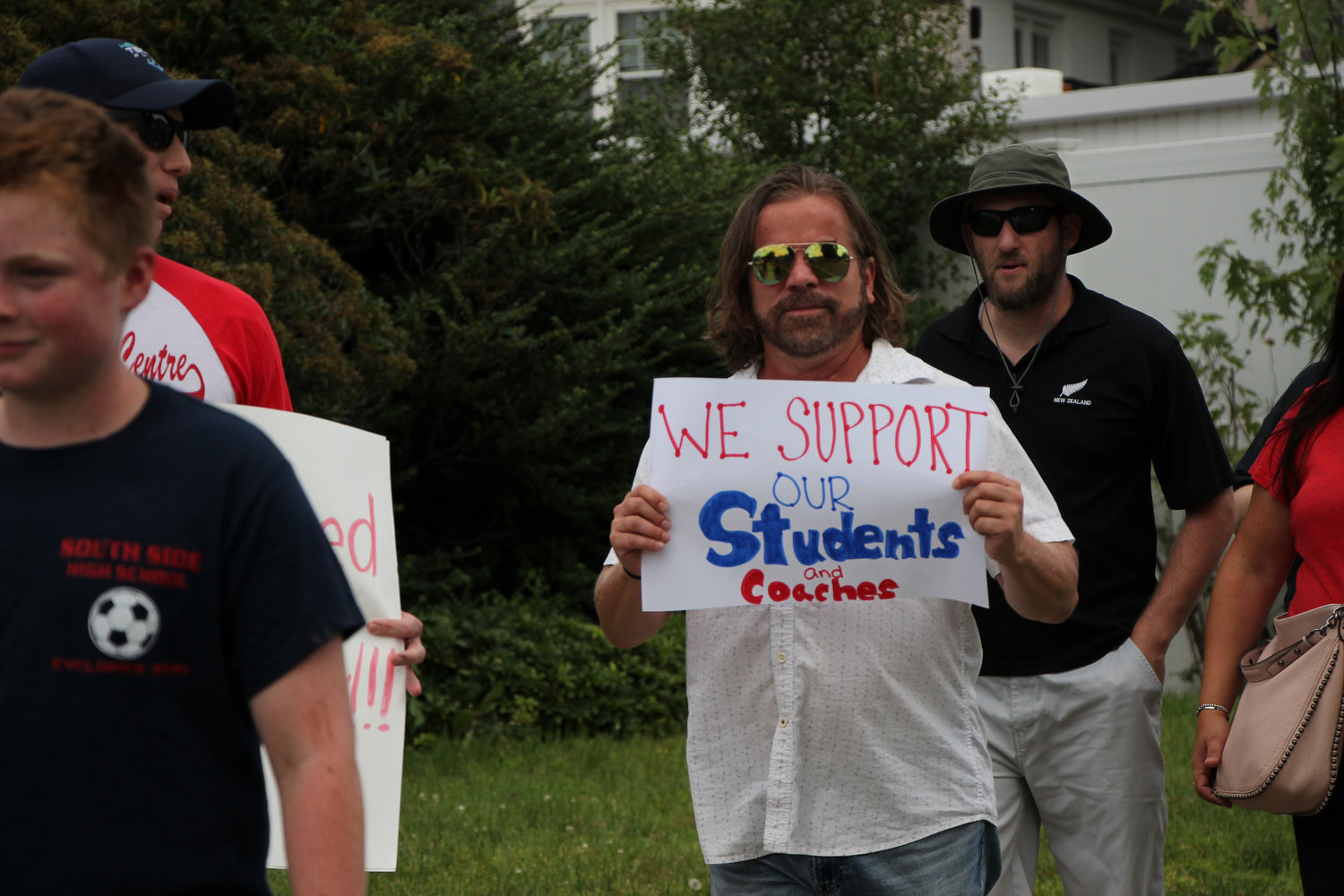 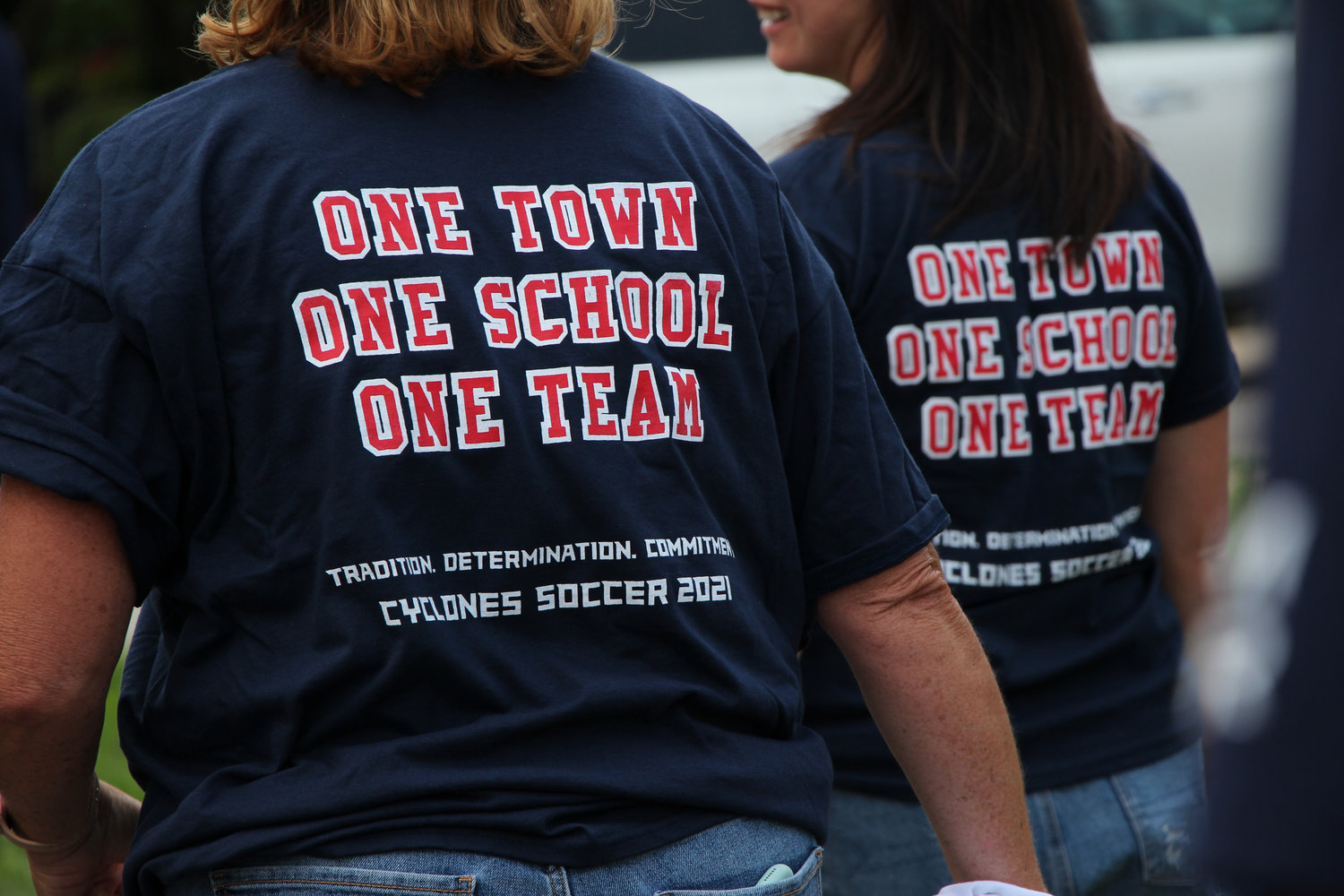 Some protesters wore shirts as a reminder of team unity.
Theresa Press/Herald
Previous Next
By Tom Carrozza

Chants of "Why were the coaches let go? We don't know" could be heard throughout Shepherd Street and Long Beach Road in Rockville Centre on Wednesday as nearly 100 residents took part in a vocal rally in support of two girls' soccer coaches who were not brought back for the 2021-22 season.

Their vocal and impassioned chants were in protest of the Board of Education voting not to rehire girls’ soccer coach Jennifer Abgarian and assistant coach Chris Aloisi at its July 21 meeting. The pair led the Cyclones to their first Nassau County Class A championship since 2014 last season and Abgarian is the county's reigning Girls' Soccer Coach of the Year.

The protesters circled around the area just outside the school entrance on Shepherd Street at 2 p.m. before they marched down to Long Beach Road, wielding signs and chanting. The crowd comprised student-athletes from several of both the boys’ and girls’ programs, parents, teachers, students and coaches. Many held signs with messages of support for Abgarian and Aloisi, while other signs implored the school to put students first.

“These coaches are a part of our family,” rising senior co-captain Emma Madden said. “So hearing this news was so heartbreaking and devastating, especially going into our senior year as captains.”

Fellow rising senior and co-captain Cristina LiCalzi talked about how the timing of the decision will affect the team next season. “It’s up to the captains to settle the team and it’s a lot of pressure,” she said. “It would help if our school supported us . . . We don’t really know who to talk to or who to ask questions, so it’s really up to us at this point,"

Both girls said they were heartened by the turnout for the rally. “Seeing all these teachers and their signs, it’s just so nice to know that so many people do support us,” Madden said.

Jaime Madden, Emma’s mother, spoke about the shock the community felt when they heard the news. “The girls have so many questions, and part of the frustration is that there are no answers,” she said.

One of those teachers in attendance was Chris Webster, who teaches English and coaches cross-country and winter track and field at the school. Webster characterized his initial reaction as “disbelief and shock.” He continued: “Something like this has never happened before and honestly I thought someone was telling me a joke when I first heard it," he said.

Webster added that the decision to not rehire the coaches “scared and frightened” him. “A school district has to work on trust and relationships between the Board of Education, the community, the teachers, the staff and the coaches," he said.

Webster, who has taught and coached at the school for 22 years, said conversations between teachers and coaches in the days after the decision have revolved around the fear of being the next ones not brought back.

Frank Van Zant, the president of the Rockville Centre Teachers’ Association attended and helped to organize the rally. “It doesn’t add up and doesn’t make sense,” he said after citing the awards and accolades Abgarian and Aloisi had earned, "and what it points to is grudges on the part of individuals.”

In separate 3-2 votes at the July 21 meeting, the board decided not to rehire the coaches weeks after they were honored for their banner season. Van Zant said he hopes that the board will reconsider the decision at an emergency board meeting. A meeting was scheduled for Monday, but the topic was not revealed.

Coaching positions are one-year terms, and must be applied for each year. When the superintendent and athletic director approve an applicant, the final step is a school board vote. Board President John O’Shea, Vice President Christine Ferazani and Trustee Erica Messier voted against rehiring Abgarian and Aloisi, while Secretary Kelly Barry and Trustee Tara Hackett voted in favor. Superintendent June Chang and Carol Roseto, the school district's director of physical education, health and athletics, each approved the rehiring of Abgarian and Aloisi before the board voted it down. O'Shea told the Herald earlier this week that none of the board members would speak on the matter, citing advice from an attorney representing the school board.

The decisions have been met with widespread opposition, including claims that at least one school board member voted “no” because of a personal issue related to the soccer program dating back several years.

Tony Bellissimo and Mike Smollins contributed to this story.