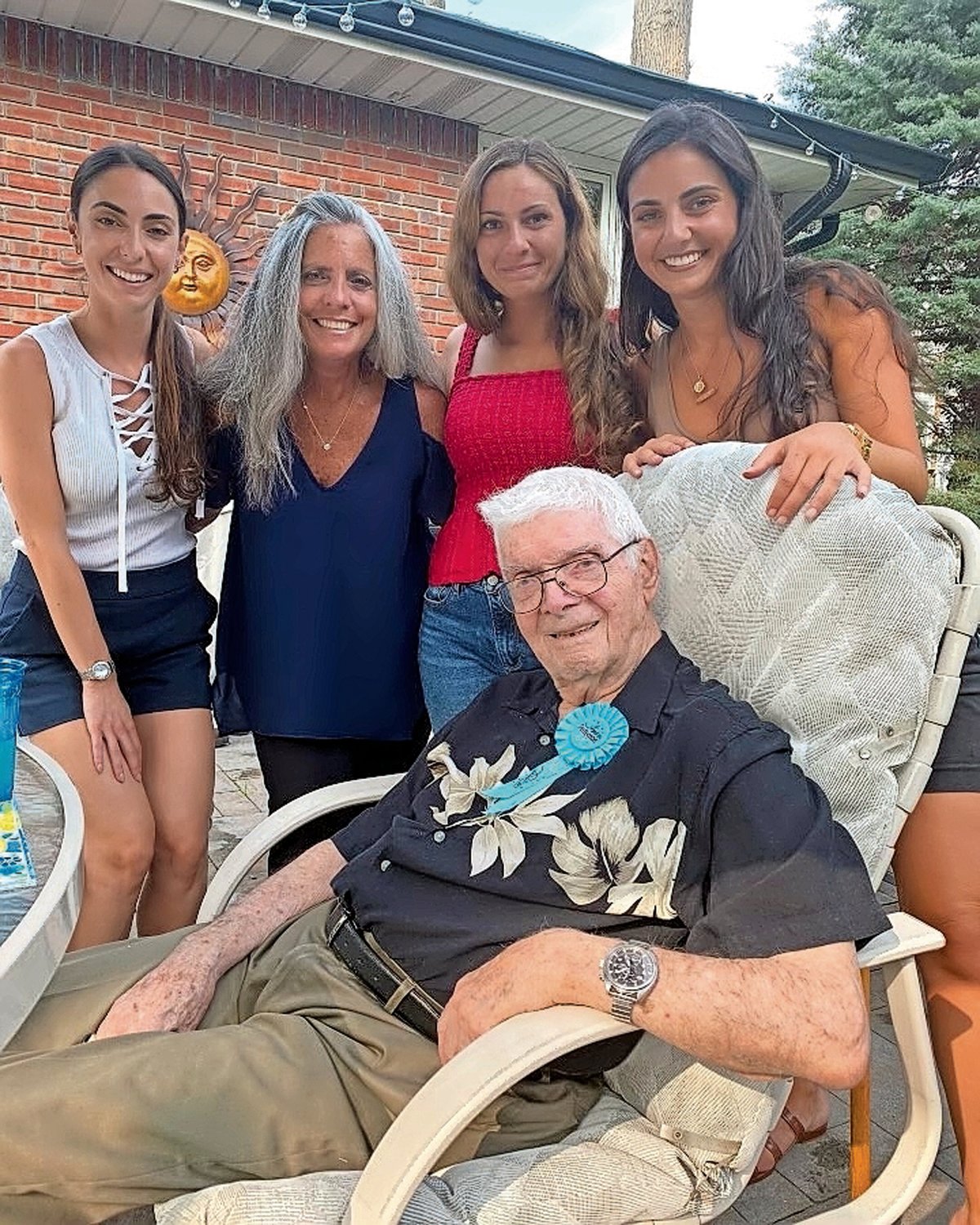 Thomas Nola, center, celebrated his 100th birthday after beating Covid-19 and a cardiac event in late 2021. His daughter Francine Castagna, second from left, and granddaughters, from left, Nicole, Gianna and Brianna surprised him with a party.
Courtesy Francine Castagna
By Tom Carrozza

When Rockville Centre resident Thomas Nola was born, Babe Ruth was the most popular athlete in America, Warren G. Harding was president and gas cost 25 cents a gallon.

Nola gave himself every chance to make it to age 100 by sticking to healthy habits, but a cardiac event and a Covid-19 diagnosis late last year made the road a bit rockier.

Last Saturday, four days after Nola hit the century mark, dozens of his family members and friends gathered at his daughter Francine Castagna’s home to surprise him. That afternoon, Nola walked into his daughter’s backyard and froze when he saw the small crowd. “Thank you, thank you, thank you,” he exclaimed.

Nola has long been committed to maintaining good health and staying in shape. He went to the gym four times a week, becoming one of the older mainstays at Sportset in his nearly three decades in the village. In November, at age 99, Nola was working out in the gym with a personal trainer when he fainted.

After undergoing surgery to have a pacemaker implanted, Nola spent the next few months at three different hospitals and two rehabilitation facilities. During his second round of rehabilitation, he was diagnosed with Covid.

“He was almost gone,” Castagna said. “St. Francis brought him back to life. He was in six facilities in a matter of 30 days, and he made it home.”

Nola was born in Brooklyn, and lived there with his parents, a sister and a brother. Music has been a lifelong passion: He sang opera parts in his youth, and learned seven instruments by ear. He worked as an engineer for New York City until he retired at age 55, inspecting the boilers at many of the city’s schools.

He claims to have worked on the Manhattan Project, helping to create the atomic bomb. He has kept busy during his long retirement by going to the gym and attending mass at St. Agnes four times a week.

“The good Lord has been on my side,” Nola said.
He made his way to Rockville Centre 27 years ago, when Francine, his only child, married Joseph Castagna.

Their three daughters, Nicole, Brianna and Gianna, have known their grandfather to be a selfless, caring man who looked after his wife of 55 years, Gilda, and his aunt Minnie Westmiller as they each grew older. Nola hopes to celebrate his 102nd birthday, like Westmiller did.

Now, his family is returning the favor for all of the care their selfless patriarch gave them. Nicole Castagna, 26, has been living with her grandfather since his cardiac event.

“He’ll remember a song and just start belting it out at the house,” Nicole said. “He always keeps the mood very lively.” Her grandfather often bursts into Tony Bennett’s “Because of You” when the two are hanging out together.

Brianna and Gianna Castagna, 25 and 20, respectively, say they love their grandfather for his energy and positivity. Gianna recalled him running around and playing hide-and-seek with her and her sisters into his 80s.

“He’s a very happy person, which I think rubs off on us sometimes,” Brianna said. “He reminds you that life is meant to be simple.”