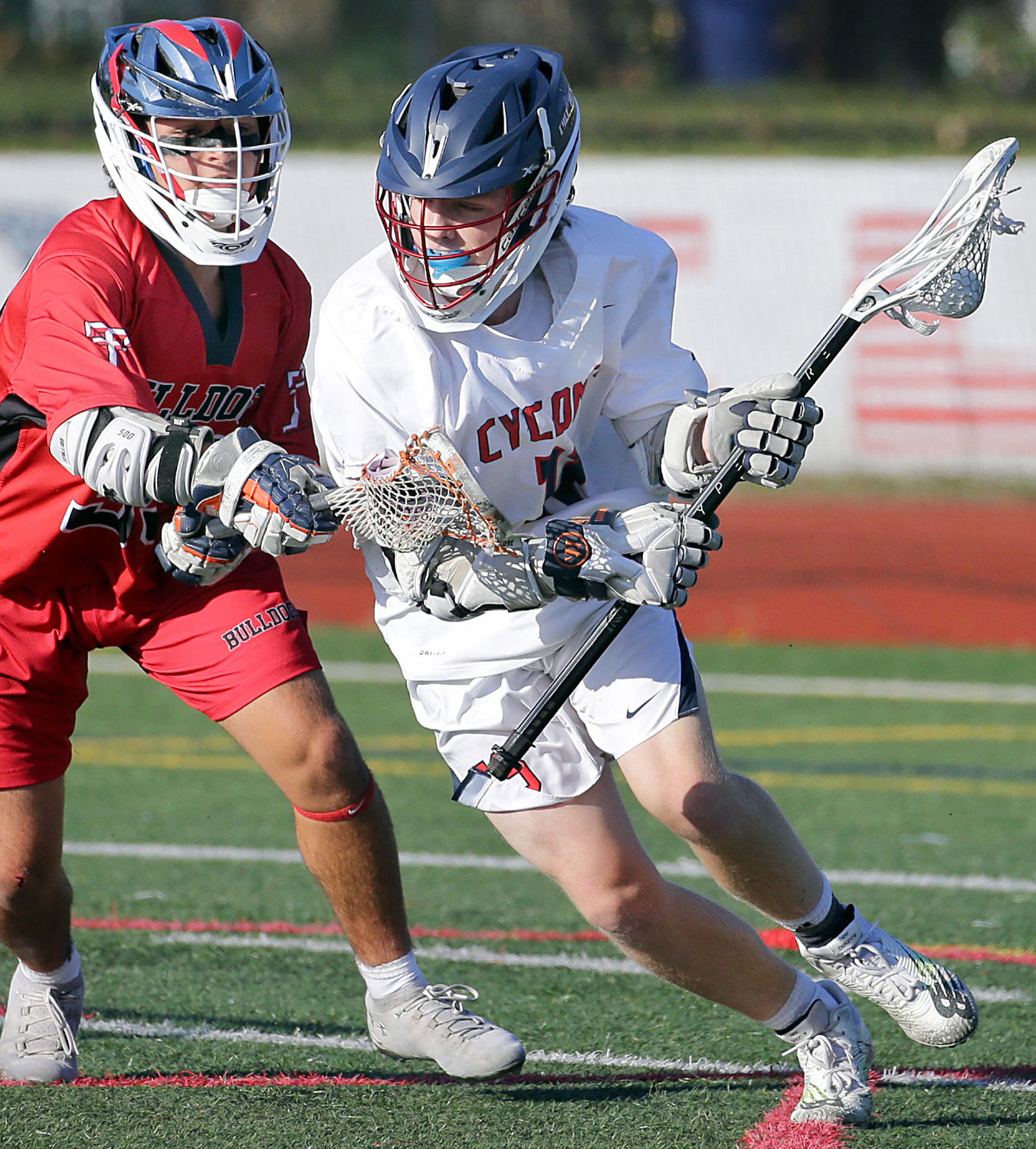 Junior attack Ryan Mayerhofer, right, made a move to the cage during the Cyclones’ 13-4 victory over Island Trees last Friday.
Brian Ballweg/Herald
By Brian Kacharaba

Before the season, South Side boys’ lacrosse coach Steve DiPietro wasn’t sure how his team would respond to the “new challenge” of moving to the ultra-competitive Nassau Class C. So far, the Cyclones have responded in a big way.
South Side enters the final third of the season with an impressive 4-1 conference mark and sit 7-3 overall at press time, including big victories against some of the county’s top teams. The Cyclones have already matched their entire 2021 win total thanks to some timely scoring, stout defense and goaltending, and some young players poised to be future stars.
South Side started the year 6-0, which included dramatic overtime wins over Massapequa (7-1) and Wantagh (6-4) in which it trailed 5-2 at halftime each time. That was followed up by a 17-4 walloping at Plainedge on April 9 and a 14-4 rout of Floral Park three days later that was ignited by a nine-goal first period.
South Side eventually endured its first slump of the season with close defeats to Farmingdale and Port Washington and a 14-8 setback to Manhasset (8-2, 6-0 conference), the best ‘C’ team in the Conference CD division, but rebounded with a 13-4 home win over Island Trees last Friday in which the Cyclones led 8-0 at halftime.
“The guys certainly over those first six games raised the expectations of what we’re capable of,” DiPietro said. “I thought it was going to be slow going, but the kids showed ob\a lot of character and a lot of our ability being able to hold off a strong Syosset team and being able to come back against Massapequa and Wantagh.”


Brady West scored three times against Island Trees to become the first Cyclone to hit the 20-goal plateau, one more than his entire 2021 All-County total. His goal 2:27 into overtime handed Massapequa its only loss.
Offensive depth has also keyed the Cyclones’ success with 17 different players netting goals this season and 18 collecting at least one point. Junior Ryan Mayerhofer is second on the club with 14 goals and 21 points, including the overtime winner against Wantagh off an assist from sophomore Michael Aiello, who has impressed with 13 tallies.
“We have three new attackmen this year, so all three of those guys with a junior in Ryan Mayerhofer and the two sophomores in Aiello and [Owen] West,” DiPietro said. “All three of those guys have blended in very well to start the season.”
Another sophomore, Michael Melkonian, is emerging as one of the top faceoff specialists in the county by exceeding the 80 percent mark several times this season while posting a 70-percent clip overall.
The defense has yielded double-digit goals just once this season and is led by midfielders Jack Lozito, Dan Capitelli and Luke Schwartzberg and defenseman Pat Erickson, Logan Kelly, Pat Mullin and Ryan Kassl. All-Conference goaltender Tommy Gentile has been busy this season by averaging just over 10 saves a game, including 14 against Massapequa and a season-high tying 16 against Wantagh.