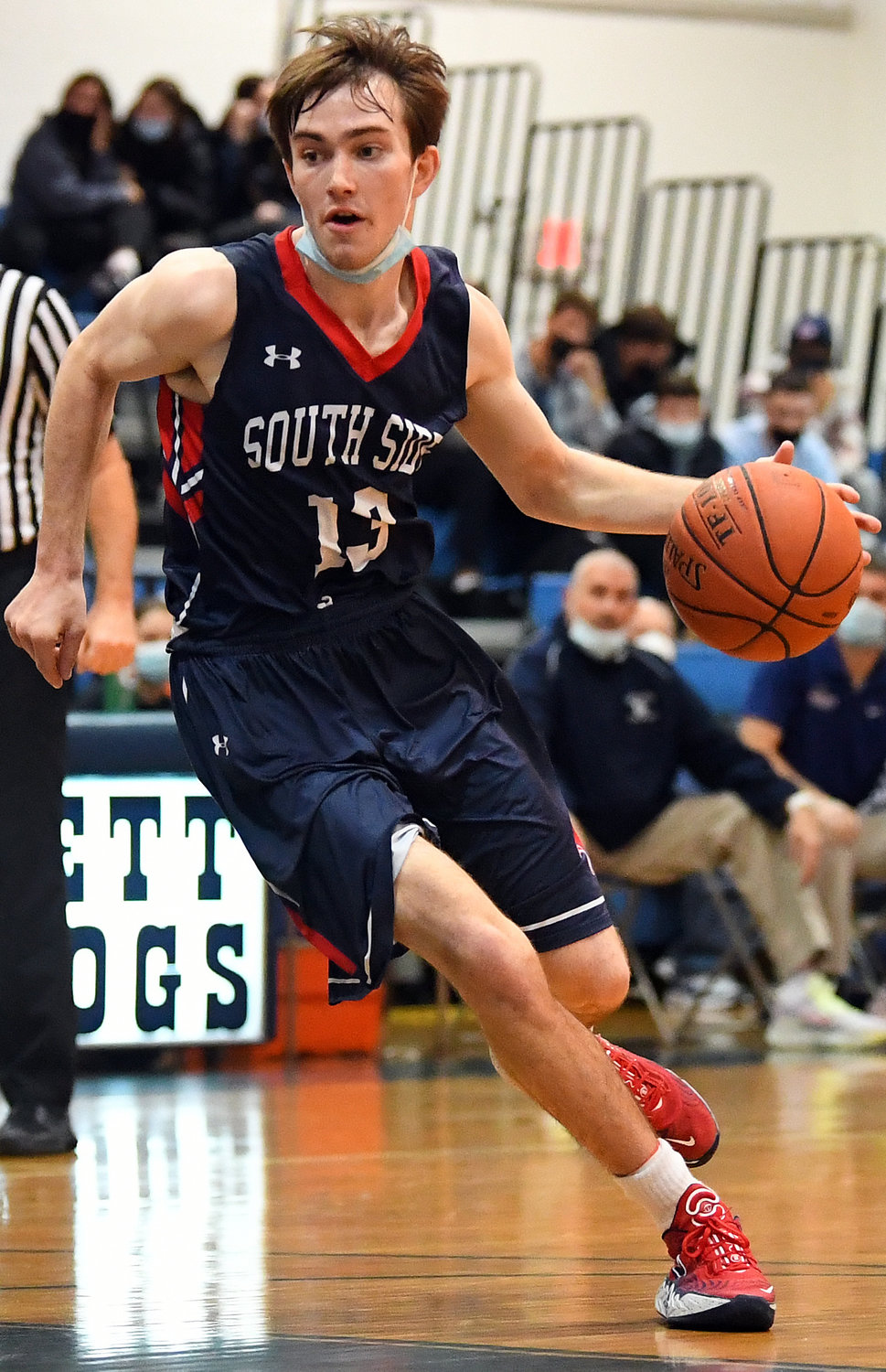 Senior Patrick Erickson (9 points) was part of a balanced offensive effort for the Cyclones on Jan. 19 as they cruised past Division, 87-69.
Neil Miller/Herald
By Jamie deJong

The South Side boys’ basketball team has been surging in recent weeks, as the group’s impressive play as of late is reflected in its impressive 8-1 mark in Conference A-3.
The Cyclones’ record and level of play is even more laudable when accounting for the COVID complications affecting all teams alike and the lack of experience the unit had entering the season.
“We’ve been a work in progress,” head coach Jerry D’Angelo stated. “We’re very young. We have three sophomores and six juniors so we’re definitely on the younger side. Our sophomores were thrown into a fire. They played three weeks of a JV season last year and now are giving us major minutes.”
For the Cyclones, their multifaceted and adaptable offensive attack has been one of the central catalysts for their strong start. Nobody on the roster puts up overinflated or saturated statistics, as that is simply a byproduct of the deep and potent rotation. Seniors Luke Schwartzberg and Chris Goldstein have been steady presences as the starting backcourt. Sophomores Ryan Kennedy, Patrick Mullin, and Matthew Arnott have been more productive than their respective grade levels would suggest, as the trio is earning significant minutes in the rotation.
D’Angelo said he’s excited about how deep the roster has become. “What I’ve liked out of the past three or four weeks is that kids have been interchangeable,” he said. “We play a lot of kids and they’ve been able to play different positions and spots. It took a little bit of time for us to get used to that. We use the term called strength in numbers, as we try to use our numbers to our advantage and try to be fresher than who we are playing against.”


Junior forward Robert Pericolosi is averaging double digits in points and does so well within the flow of the offense. Despite his satisfactory production, Pericolosi’s defensive aptitude has been what has impressed D’Angelo most up to this point.
“We knew he was very athletic and he’s turned out to be our best total defender,” D’Angelo said. “We match him on everyone’s best player. It’s been a nice surprise how well he’s responded to that challenge.”
As of now, the Cyclones (11-4 overall) stand second in A-3 behind only Manhasset. They lost the first meeting by 12 points on Jan. 11. The rematch is at Manhasset on Feb. 8.
While South Side’s record is indicative of a team poised for a deep playoff run, there are certain elements that need to be tweaked for it to reach its maximum potential. “Our next four to five games we need to get better on the boards, minimize turnovers, and get better in our system,” D’Angelo said. “I think we’re getting more confident in our system but we need to lock in on those fronts.”
South Side has four more games remaining before the Nassau Class A playoffs. The Cyclones will look to continue their playoff pursuit when they host Kennedy this Friday at 7 p.m.