South Side continues to progress 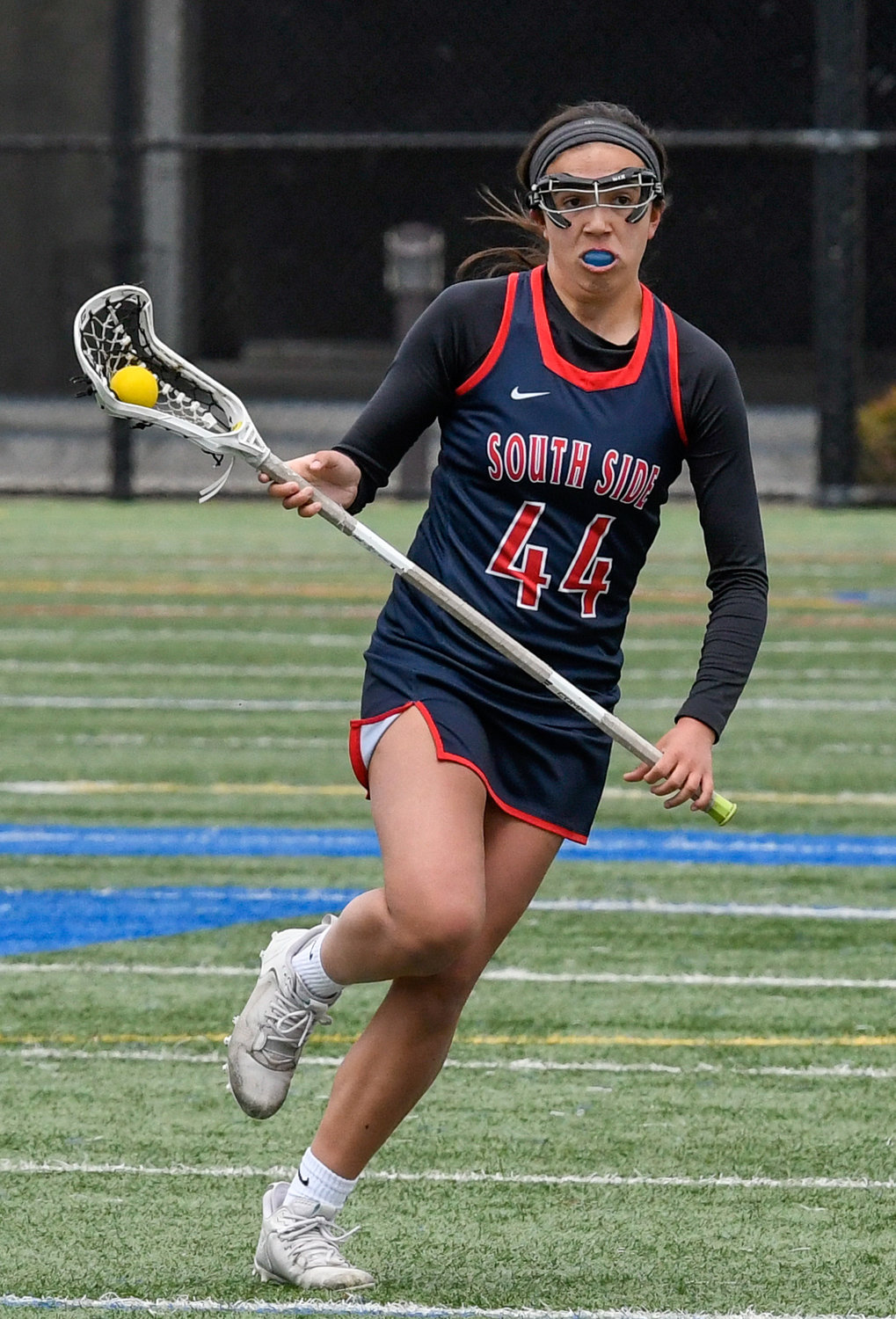 Sophomore Avery Testa has provided a jolt of offense for the Cyclones and scored five times in a victory over Long Beach.
Keith O'Reilly/Herald
By Jamie deJong

Coming off a trip to the Nassau Class B finals, South Side’s girls’ lacrosse team is looking to build off what has been a solid start to 2022.
The Cyclones have a 4-4 record overall and a 2-3 record against Nassau’s top competition, placing them right around the middle of Conference 1 with ample room to go up from there. Coach Rob Devlin has been impressed with the progressions his group has made throughout this preliminary stretch.
“The girls are doing really well,” Devlin said. “They are making progress in every aspect that we are asking them to. They are improving every day which is the main thing that I am looking for. We’re looking to hit our stride come the playoffs.”
Offensively, the team possesses a blend of experience and youth, and the group has clicked so far. Emily Iacobellis is a senior and has 25 points, repeating her impressive output from last season. She had 30 goals last spring. A welcomed return to the Cyclones’ attacking front is senior Mia Delmond who missed a few games but made up for lost time with her 5-goal performance in her return against Bethpage. Sophomore Avery Testa has been a huge asset as she has 20 points. She had 5 goals in a 14-8 victory over Long Beach on April 9.
Devlin stated: “The offense is a little bit younger, and they are coming along. They are putting the ball in the net so I really can’t complain.”


Defensively, the group has a similar mix to the attacking unit. Sophomore Sienna Connely has been rock-steady, as even though it’s hard to quantify defensive play due to the lack of statistics, Devlin said that “every time you look up, she is bringing the ball down the field.” Sophomore Morgan Harloff has improved immensely from her first varsity season, Devlin said. “Last year she was the quiet freshman and this year she is taking charge,” he noted. Senior Emma Madden has become more of a vocal leader as well, as Devlin said that “she plays very well in her own right but she has been all over the place helping out.”
Senior Mackenzie Creagh has been an anchor for the team in the net, as the goalie has 64 saves through eight games.
The Cyclones will certainly be tested throughout the remainder of this season, as the rest of their schedule is filled with strenuous matchups. However, Devlin is confident that this group will be able to make the necessary adjustments to be at their best for the postseason.
“We have a tough schedule coming up in the conference. We have games against Manhasset, Wantagh, Plainedge, Farmingdale, and North Shore,” Devlin said. “They are all tough games but are all winnable. We just want to keep progressing forward every game. We want to see how high up in the conference and then hopefully play our best come the playoffs.”
South Side’s next game is this Thursday at Wantagh.