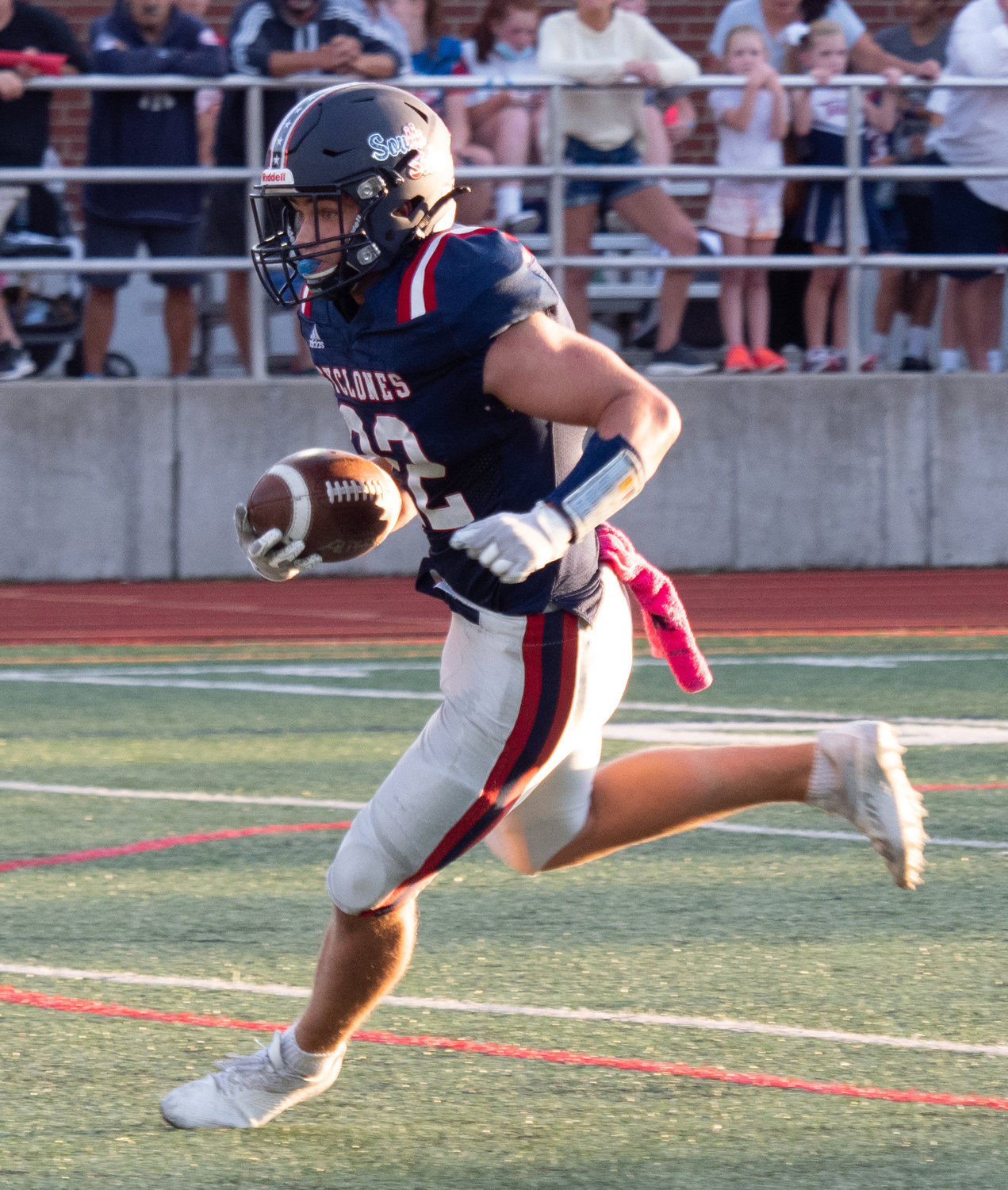 Senior Brady West had a touchdown reception and punt return for a touchdown in South Side's victory over Valley Stream South in Week 2.
Eric Dunetz/Herald
By Tony Bellissimo

After falling for the second time in three weeks, South Side has a pivotal Nassau Conference III football game on tap Friday night when it travels to face defending county champion Manhasset.

The Cyclones proved no match for Plainedge last Friday night, falling 35-0 at home. The Red Devils, who lost last season’s title game to Manhasset, are looking to get back to 2019 form when they went undefeated and captured Nassau and Long Island crowns. They got a pair of touchdown runs from Dylan Pepe in the first quarter at South Side and never looked back.

“From what I saw tonight, Plainedge is going to be tough to beat,” South Side head coach Phil Onesto said of the Red Devils, who outscored their first three opponents by a 118-7 margin. “They’re so big and talented up front,” he added. “All in all, we can take a few positives from the game, have a short memory and move on.”

The Cyclones hit on their first snap of the game when junior quarterback Ryan Kassl connected with senior Brady West on a go route for a 41-yard gain to the Plainedge 34. “We’ll take Brady in a one-on-one matchup every time because he’s such an incredible athlete” Onesto said.

The opening drive stalled on the next set of downs and the visitors needed only a handful of plays to take the lead on Pepe’s 6-yard touchdown run. All of the scoring came in the first half.

“We felt we needed to throw the ball to be successful, but we didn’t execute as well as we’re capable,” Onesto said. “The same thing happened in Week 1 when we lost to Division and didn’t take advantage of our opportunities. We were much better in Week 2 and that’s what we need to get back to.”

Kassl has appeared in all three games under center and hooked up with West for a 37-yard touchdown in a 34-6 victory over Valley Stream South on Sept. 18. Sophomore Owen West is very much in the quarterback mix and saw action in two games so far. “They’ll continue to split time until one emerges,” Onesto said. “They both have nice size and do different things well.”

It’s been running back by committee so far, though senior TJ Maher leads the Cyclones in touches, however, and also sparking the defense along with sophomore corner Jack Lozito. Maher was instrumental in the runaway victory over Valley Stream South with 60 yards and two touchdowns on only eight carries. Senior Matt Solano led the way with 93 yards and a score on just seven attempts, while Michael DiFranscica rumbled for 67 yards.

Onesto is expecting the offensive front to receive a boost against Manhasset with the return of Billy Gryboski to join seniors Killian Hansman and Andrew Fingleton, junior Matt Davares and fellow sophomores Jack Beatty and Bobby Galindo.