South Side strives for consistency 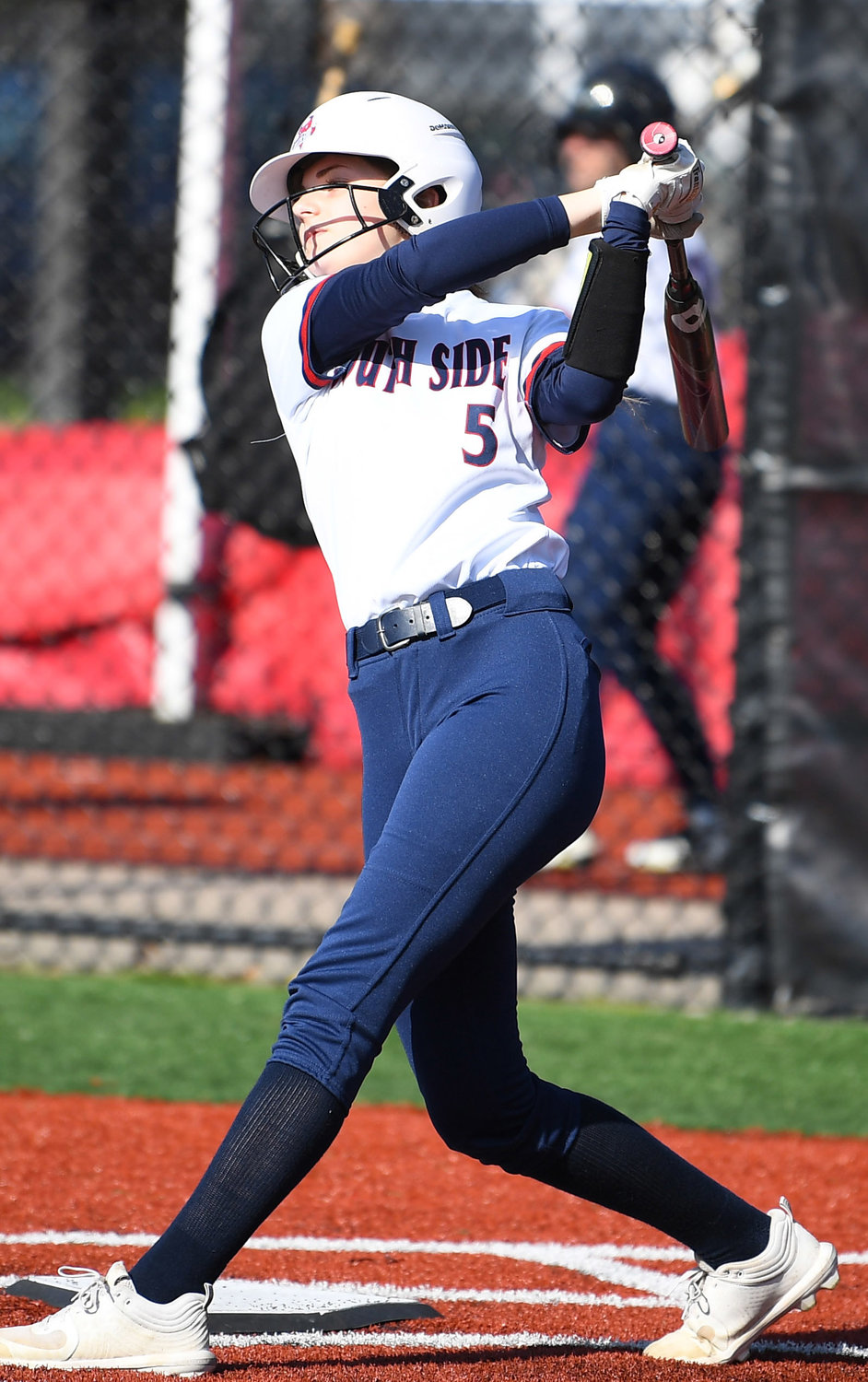 Paige Shrimpton serves as the leadoff batter for the Cyclones, who are 3-4 through seven games in the midst of a five-game homestand.
Neil Miller/Herald
By Jamie deJong

It was an learning defeat for South Side softball on April 14, as the Cyclones lost to Island Trees, 13-0.
It wasn’t for lack of effort, it was simply one of those games where the team didn’t have it and opposing pitcher Danielle Donahue was the reason why.
South Side coach Nicole Tufano and assistant Mike DiGiamo did not view this performance as a condemnation, but more of a dominant performance by Donahue, who threw a no-hitter.
“She had speed but also witched locations and spots very well,” coach DiGiamo said of Donahue. “After the first inning, we all kind of looked at each other and said ‘man she’s good.’”
The loss dropped the Cyclones’ overall record of 3-4, which includes road victories over Floral Park, Valley Stream North and New Hyde Park. There have been plenty of exciting developments in the initial seven-game stretch.


“We have two really good pitchers in Lily McGrath and Emily Kolish, who we have a lot of confidence in and the top of our lineups have great at bats,” DiGiamo said. “We’ve had games where we have put it all together with offense, defense and pitching and those are the games we’ve come out on top.”
McGrath already has two dominant pitching performances on the year, with a 10-strikeout complete game against Valley Stream North and a nine-strikeout performance against New Hyde Park. She also hit two home runs against Port Washington. While it was a non-league game, Koluch showcased her skills against Floral Park, when she struck out eight hitters in three innings.
At the dish, perhaps no performance demonstrates the top of the lineup’s potency then the performance against Valley Stream North, where the top five hitters all had multi-hit efforts. Those hitters in order are: Paige Shrimpton, Jacquelyn Bee, Charlotte Schmidt, Ashley Sewell, and Alice Araneo. Bianca Onaoarto also had a two-run homer.
Many of the issues that have plagued the Cyclones are the small things and getting the fundamentals correct.
“The games where we’ve come out on the losing end similar to today that we’ve needed to clean up like defensively and baserunning that have snowballed in our losses,” DiGiamo said. “As coaches, we will adjust that and the girls are ready to work so we’ll get after it and should have a better second half of the season. “
With plenty of softball yet to be played, Tufano and DiGiamo are confident South Side can have more performances like it did against Valley Stream North and New Hyde Park. Mary Kelleher had four hits and knocked in three runs, and Bee scored four times in the 13-3 win over Valley Stream North. Bee then drove in five to lead an 11-6 victory at New Hyde Park.
DiGiamo said: “If we can clean up the small stuff combined with our pitching and the way the top of our lineup has been hitting, we should be able to turn the tide in a lot of these games.”
The Cyclones continue a five-game homestand on Monday when they host Wantagh at 5:30 p.m.