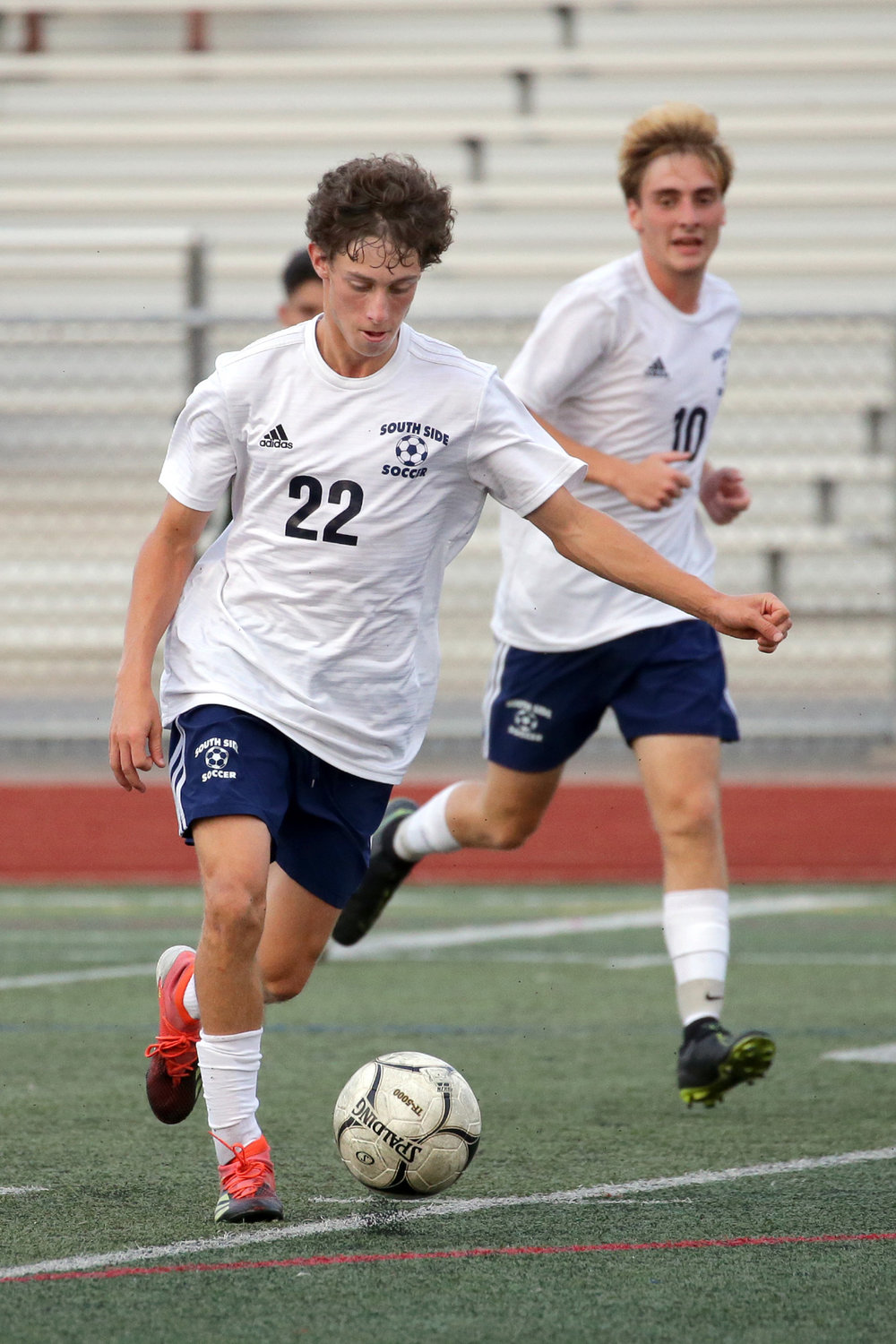 Gavin Goodlad's seven goals lead a balanced attack for the Cyclones, who are on the verge of locking down the Conference A3 title. .
Brian Ballweg/Herald
By Brian Kacharaba

New coach, different conference, same result.
The South Side boys’ soccer team’s move to Conference A-III proved to be a successful one this fall as the team clinched its second straight division title with Manhasset’s 1-0 loss to Hewlett last Saturday, despite the Cyclones’ 2-0 loss to Kellenberg that same day.
The Cyclones (9-2-1, 9-0-1 Conference A-III), who won the A-IV crown last spring, were riding high with a four-game winning streak before the loss that eventually proved to be moot. This Thursday’s rematch with Manhasset is now about gaining momentum for the playoffs and possible seeding as the regular season comes to its conclusion.
New coach Patrick Corvetti, a 1991 South Side High School graduate and soccer standout himself, couldn’t be happier with his homecoming.
“It’s been great,” he said. “Everything’s going in the right direction. It’s great being around the boys and the whole town and the high school.”


Corvetti credited a defensive corps anchored by seniors James Fahy and Lukas Anisansel that showed noticeable improvement over the past two months and a team-wide commitment to his offensive and defensive schemes as reasons for their success.
“I kept telling them to trust the process and trust me and assistant coach Chuck Phelan and I think that’s a part of it to,” he said. “They’ve been working hard to get better the whole season.”
Another reason could be a balanced offense that produced 10 different goal scorers this season. Junior Gavin Goodlad has a team-leading seven goals this season scored in four straight games from Sept. 27 to Oct. 7, including the tiebreaking tally off a Danny Walter corner kick in the second half to help South Side hold off Hewlett 2-1 on Oct. 5.
“He’s got good pace, works really hard and he’s really coachable,” Corvetti said. “He’s been working on shooting in practice and he’s putting his time into it and I expect him to carry us into the playoffs.”
Goodlad also helped make “Senior Day” a memorable one for his teammates and Corvetti and Stephen Nelson and Walter also scored in a 3-0 victory over Valley Stream North on Oct. 7. Corvetti circled that game as the one where the entire team came together.
“We dominated the game,” he recalled. “That was something that solidified us going into the playoffs. There were three games leading up to that game that felt like we were getting more united and more united and [had] more chemistry. It was a great, perfect night.”
Junior center attacking midfielder Ryan McNicholas, who had three goals and four assists at press time, has been “one of our best players consistently”, according to Corvetti, who also lauded center midfielder Robert Pericolosi for solidifying the defense after moving into the starting lineup at the beginning of October.
South Side last won a county championship in 2014 and Corvetti believes this group has a chance to end that drought.
“I think we’re in the right place to be in a position to definitely win it,” he said.