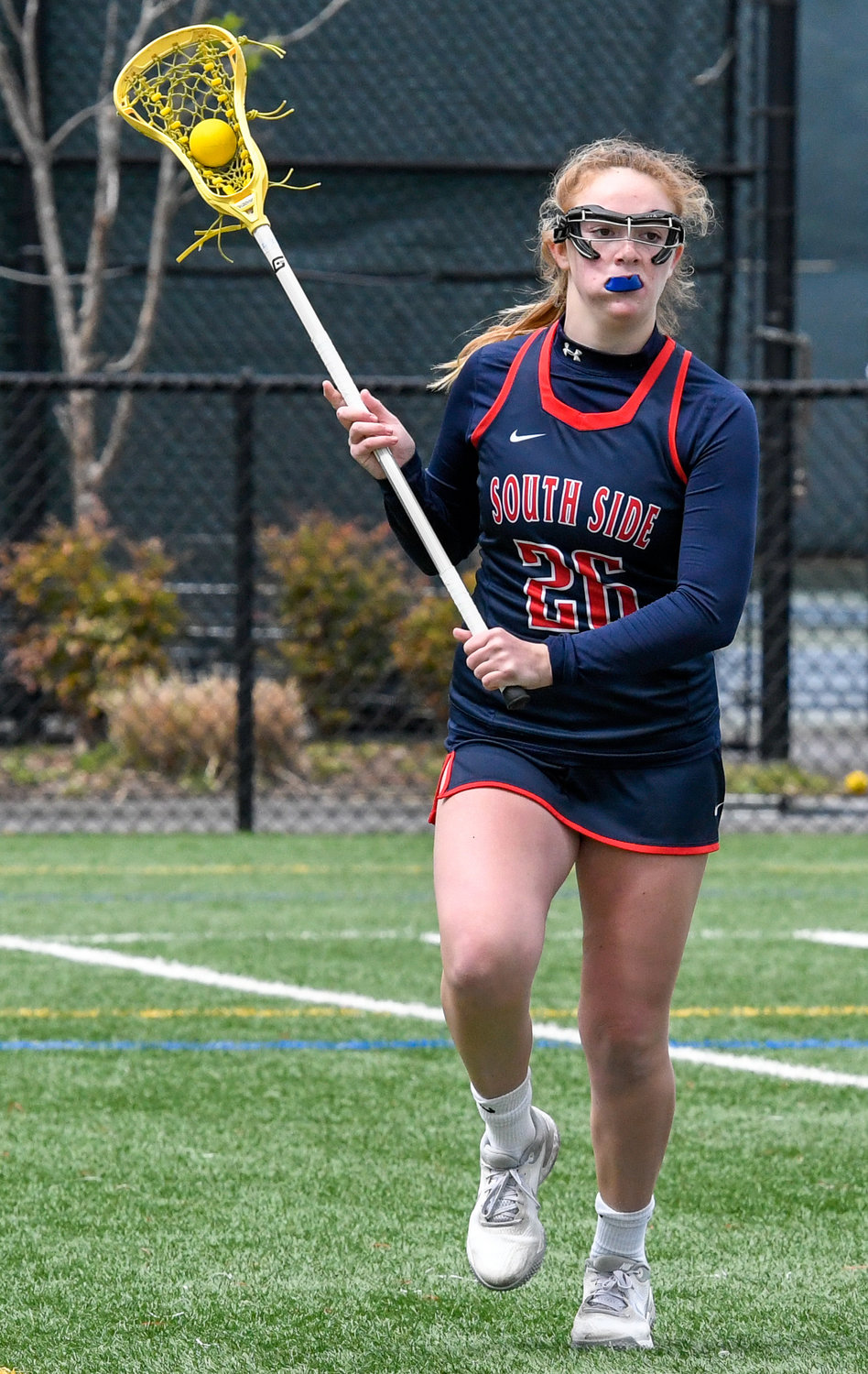 After making history last year with its first ever country finals appearance, South Side girls’ lacrosse is primed for another deep playoff run.
Competing among the best teams in Nassau County in Conference I, South Side finished the regular season at 7-7, which included a pair of losses by two goals to powerhouse programs Garden City and Wantagh.
“The girls are confident no matter who they step on the field with,” said sixth-year South Side coach Rob Devlin. “There were a lot of close games where we came up a little bit short but we learned from them and you cannot start off slow and give other teams a head start and try and catch up.”
South Side began its quest to return to the county championship stage with a 12-9 victory against Plainedge last Friday in the Class C quarterfinals powered by four goals from Emily Iacobellis. The fourth-seeded Cyclones will next take on top-seeded Wantagh in the semifinals Thursday at Adelphi’s Motamed Field.
In its regular season meeting with Wantagh on April 28, South Side hung tough with the Warriors in an 11-9 loss in which senior goalie Mackenzie Creagh registered 19 saves. Creagh, who will play college lacrosse at Holy Cross next year,  has anchored a stout defense this year that includes starting defenders in senior Ciara Giannone (Albany commit), senior Emma Madden, sophomore Morgan Harloff and freshman Sienna Connolly.


“To Mazkenxie’s credit when you talk to her about a game like Wantagh she likes to remind us that the defense did a great job of keeping teams to bad angle shots which makes her life easier,” said Devlin of his standout goalie. “She made some unbelievable saves but she also realizes that it is the whole group that makes the difference which I think they are all learning.
The Cyclones also showed they could compete with championship-level teams during a 12-10 loss to Garden City on April 14 in a rematch of last year’s Class B finals. South Side received two goals apiece from  Iacobellis, Caitlin Haggerty, Mia Delmond and Annie Madden underscoring the diverse amount of weapons the Cyclones boast.
The Cornell-bound Iacobellis leads the offense with 38 goals and nine assists. Sophomore Avery Testa has also emerged as a big offensive threat with 33 goals.
Freshman Charlotte Rathjen has taken the majority of the draw controls this year filling the void of senior Maggie Long, who suffered a season-ending ACL injury in late March.
South Side will look to reach the county championship for a second straight year. A win against the reigning Class C runner up Wantagh, the No. 1 seed, would move the Cyclones to the Class C finals back at Adelphi Tuesday versus the winner of Thursday’s other semifinal between Manhasset and North Shore.
“Every game we are trying to walk off the field better than when we walked onto the field,” Devlin said. “They have learned every time they have stepped on the field what it takes to compete at this level and they have been fun to watch grow.”