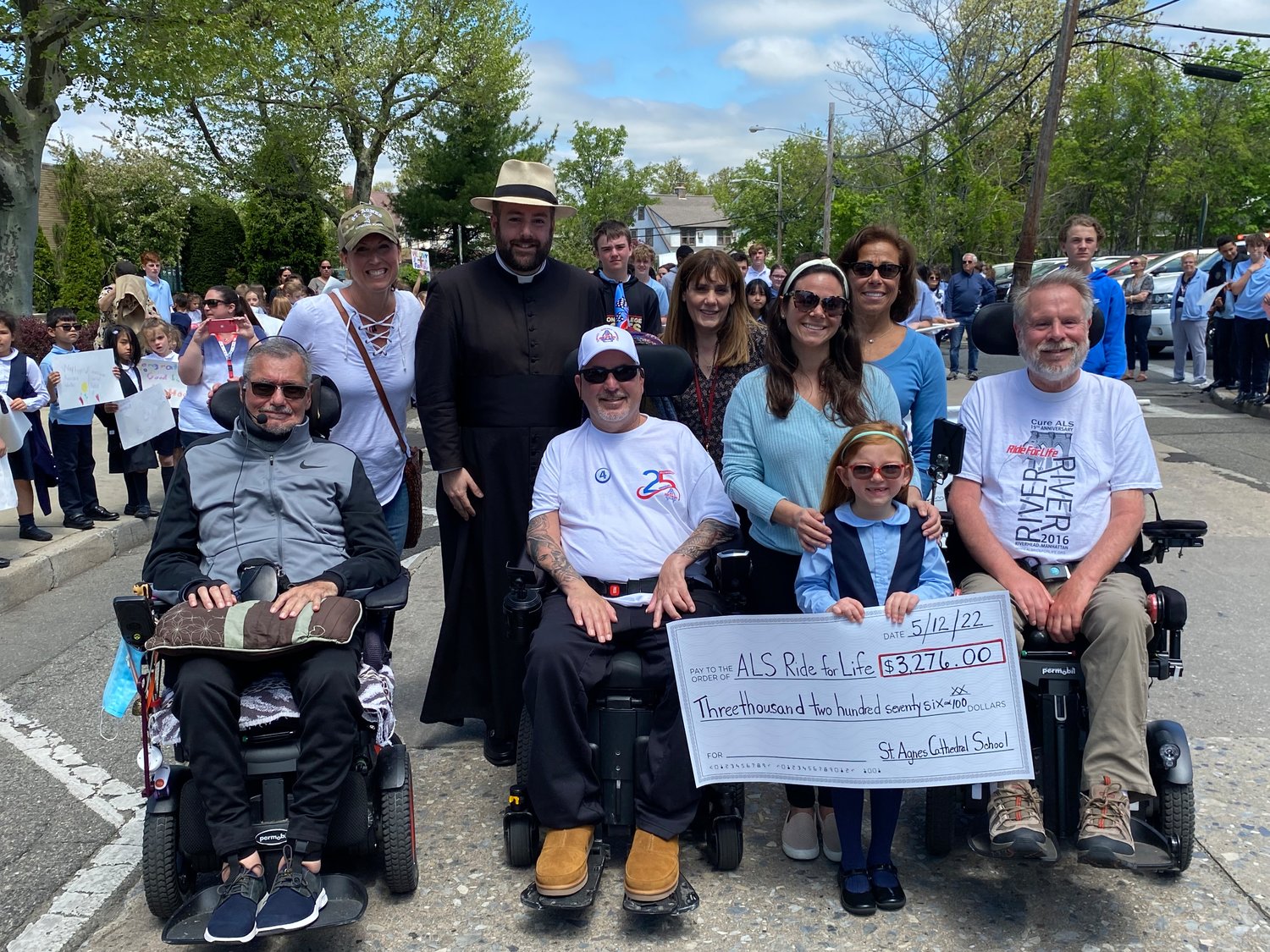 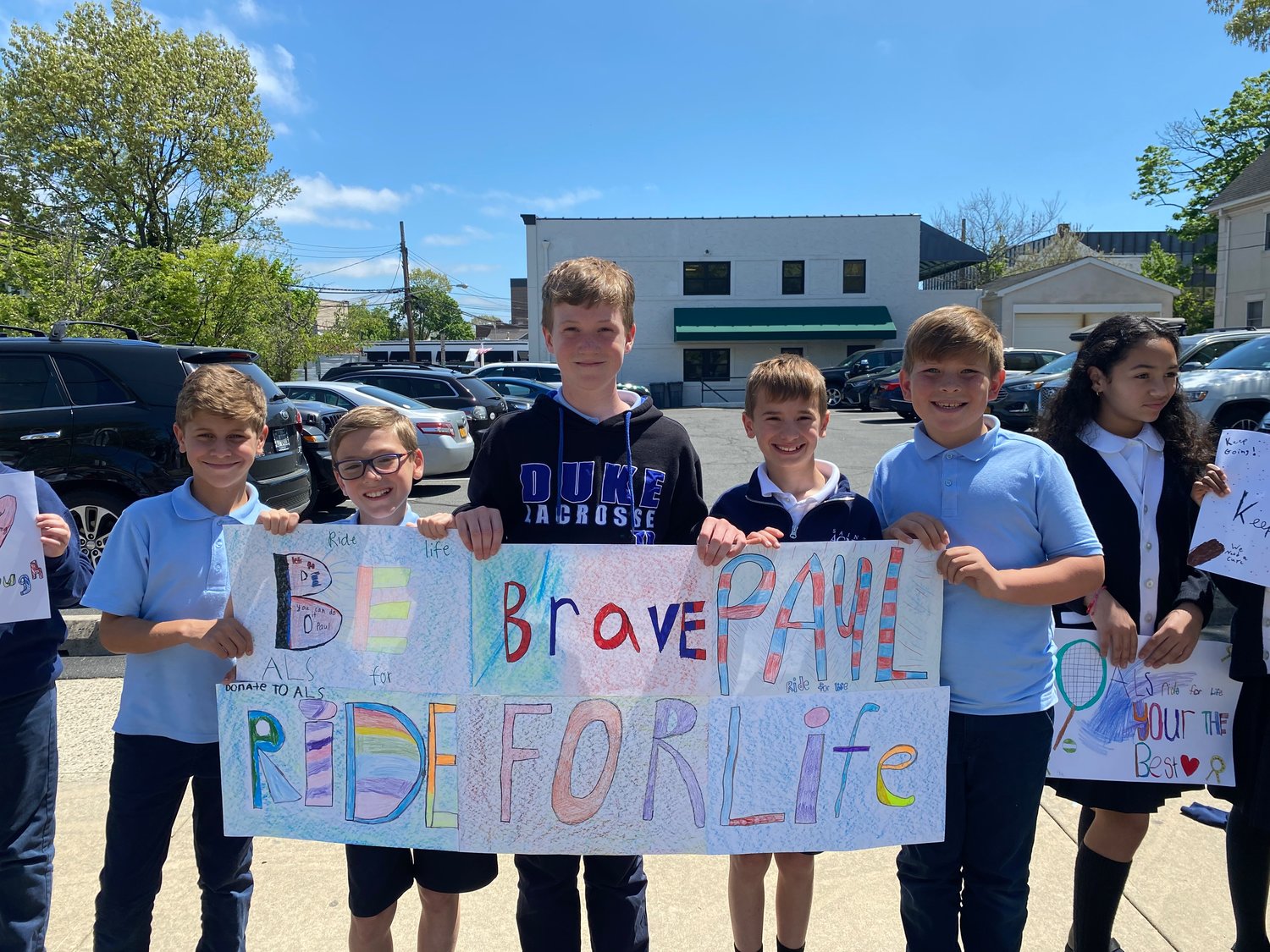 Students Philip, left, Salvatore, Kevin, Jack and John showed the banner they made in support of Paul Weisman and his fight against ALS.
Tom Carrozza/Herald
Previous Next
By Tom Carrozza

Two years after they were set to do so, the students of St. Agnes Cathedral School finally got to line Clinton Avenue and cheer on a parade of patients in their ALS Ride for Life.

ALS fighters Paul Weisman, of Bohemia, John Michael, of Baldwin, and Joe Cullum, of Hauppauge, rode down Clinton Avenue in their motorized chairs with a fire truck escort blaring its horn. On either side of the street, hundreds of students held up their creative signs and waved St. Agnes green and gold flags cheering for Weisman, Cullum, and Michael all the way from the entrance to the recess yard to the gymnasium.

In between, the parade stopped in front of the entrance to the main building, where Weisman said a few words about what the display and the charity St. Agnes provided meant to him.

“This was an incredible welcome to see everybody, your energy, your smiles, all the signs, you guys have made my day,” Weisman said. “There’s a couple hundred of you out here, but what’s really cool is you’re all in here with one voice and one voice is how we get things done in this world. Together, maybe, just maybe, we can find that cure for ALS.”

The students’ enthusiasm might have come from a familiarity they had built up with Weisman. Weisman came to the school to give a presentation on ALS and the work the Ride organization does to curb it at the school in early April in anticipation of his visit.

“They really took to him and the whole rally,” St. John said.

Ride for Life Schools Coordinator Barbara Brown got in contact with St. Agnes Parent-School Association President Colleen Whaley and St. John about coming to the school in 2020. After two years of the pandemic, they reconnected.

St. Agnes student Addison Giarrizzo presented Weisman with a check for $3,276 that was raised through Lent pretzel sales and giant chocolate bunnies raffled off with help from Rockville Centre’s Chocolate Works.

“This was beyond anything we could have ever expected,” Brown said. “We spoke to the kids after school and the auditorium was packed and you could hear a pin drop while the kids were listening to Paul Weisman.”

The ALS Ride for Life organization was founded in 1997 as a charity to raise research funds to find a cure, support patients and their families, raise public awareness for the disease, and provide the community with inspiration and hope.

Two years ago, when Ride for Life was originally supposed to ride at St. Agnes for the first time, it would have been its founder Chris Pendergast riding. But Pendergast died in 2020 at the age of 71 after fighting ALS for 28 years.

“When people would ask him, ‘Why do you think you lived that long?’ his answer was that he thought God had a plan for him,” Christine Pendergast, Chris’ wife, recalled during the parade. “And God’s plan was to let him live long enough so that he could work on spreading awareness to future generations across Long Island.”