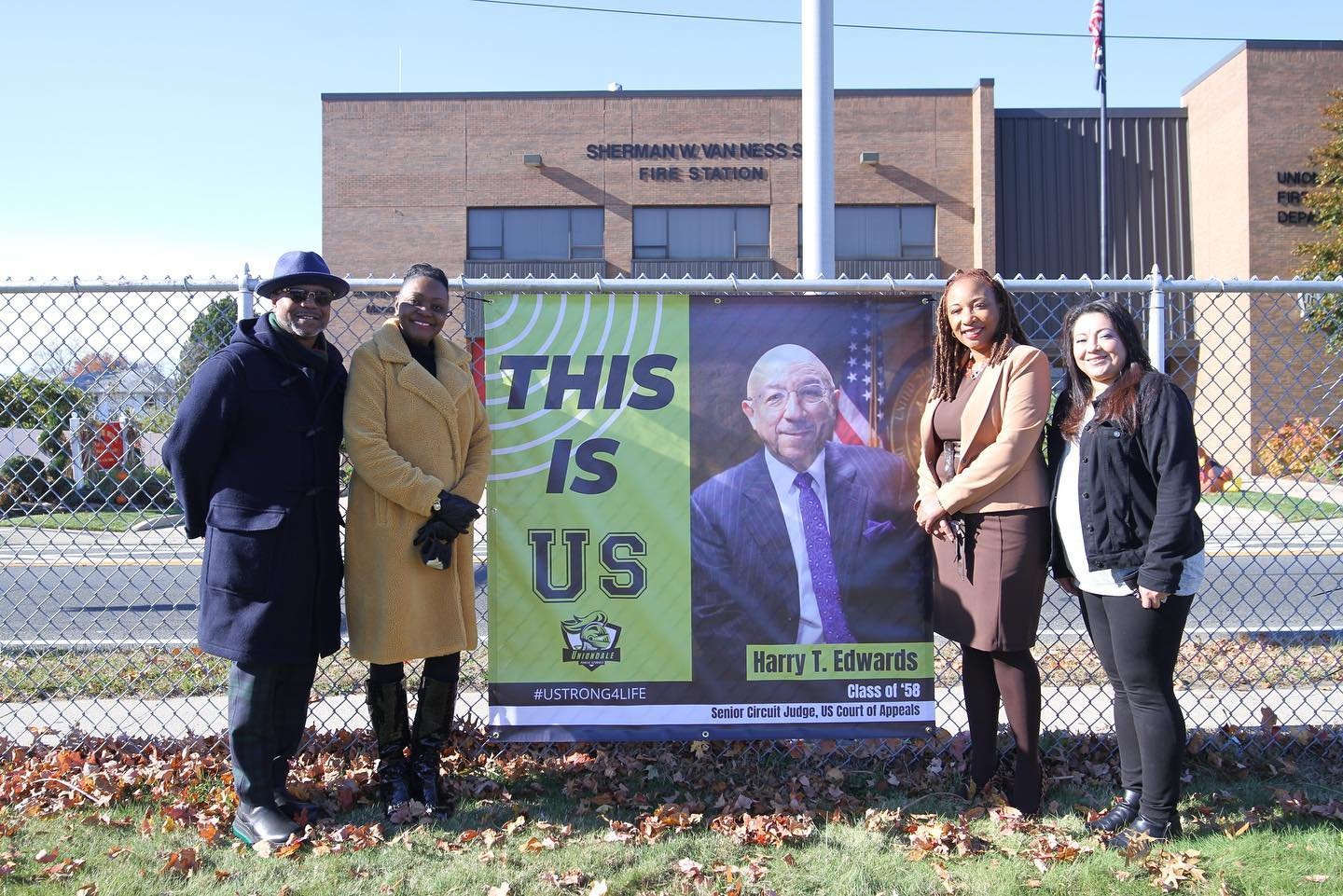 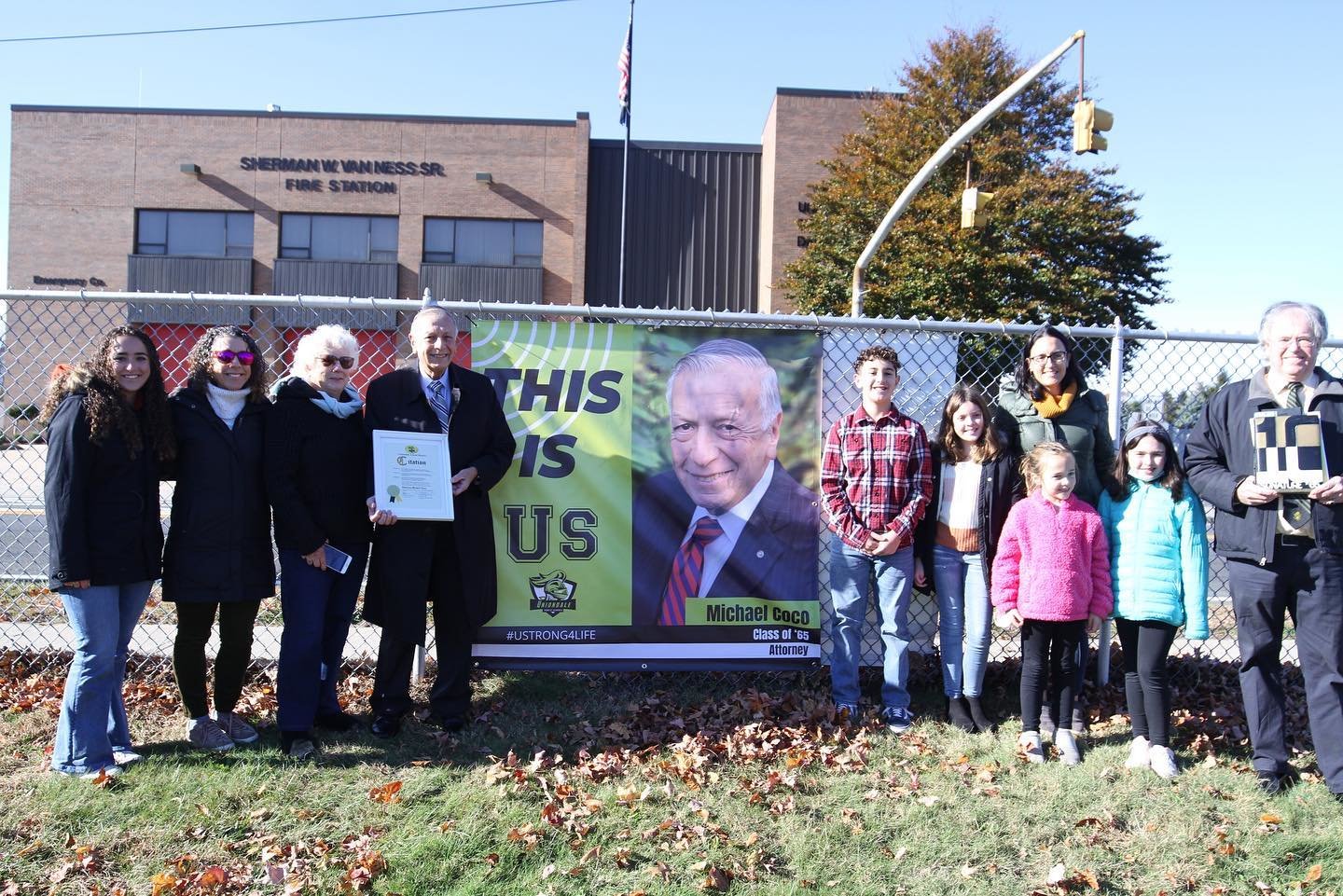 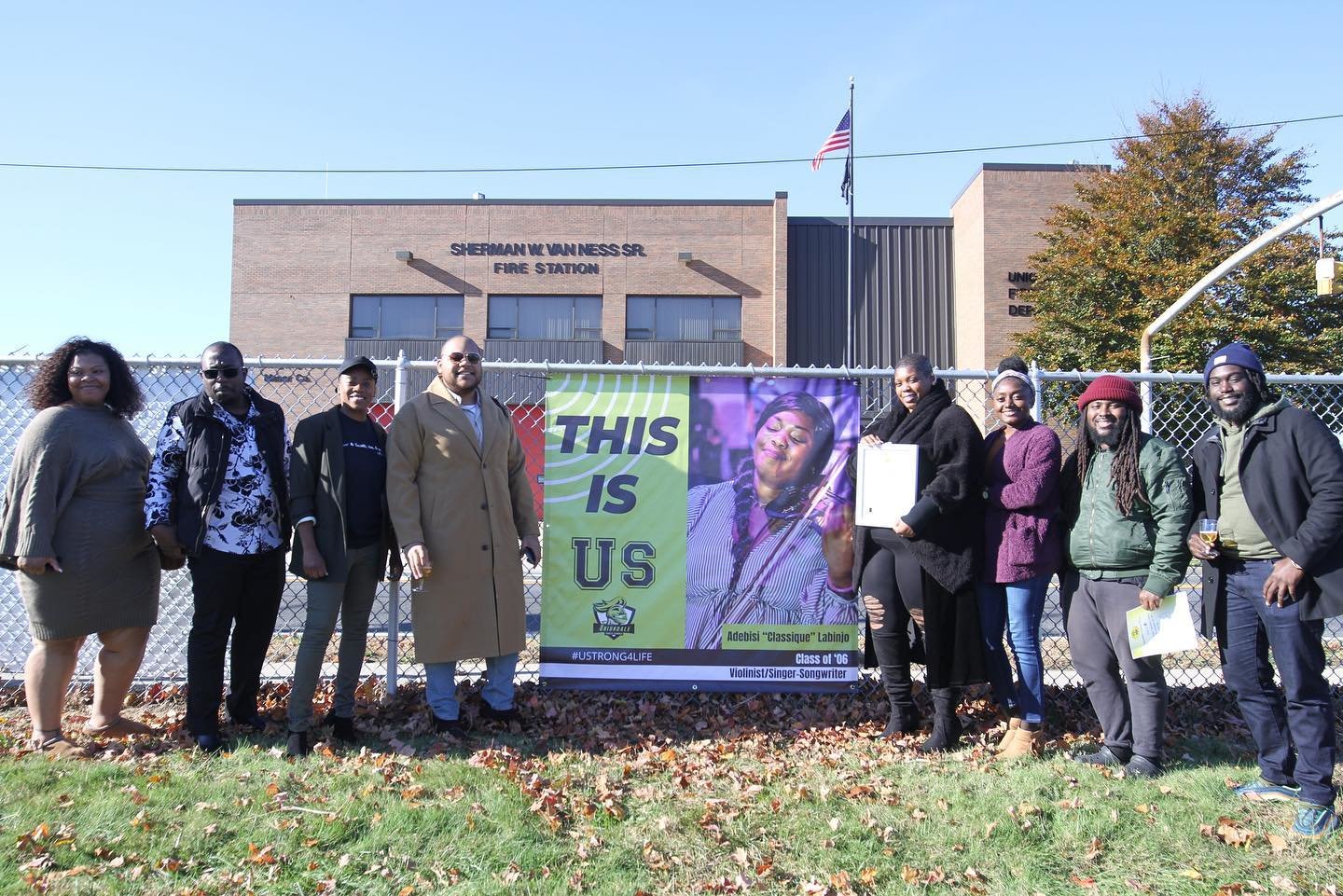 Adebise “Classique” Labinjo has taken her musical talent all over the Tri-State Area.
Courtesy Uniondale Public Schools
Previous Next
By Reine Bethany

On November 20, 2021 at 9:45 a.m. Uniondale School District congratulated three new inductees to its Wall of Fame. The inductees were Justice Harry T. Edwards, Class of 1958, Attorney Michael Coco, Class of 1965, and Adebisi "Classique" Labinjo, Class of 2006.

The outdoor ceremony was hosted by Mr. Kelvin Jenkins, Director of Fine Arts and Performing Arts for the Uniondale School District. The event began with music performed by the high school chamber orchestra followed by remarks by Dr. Monique Darrisaw-Akil, Superintendent of Schools, Mrs. Addie Blanco-Harvey, President of the Uniondale Board of Education, followed by presentation of the inductees by Ms. Rhonda Taylor, Assistant Superintendent for Curriculum and Instruction. Each honoree received a citation from the district and their pictures are now displayed on the outdoor fence of the Cornelius Court School building on Uniondale Avenue.

All of these inductees have made outstanding contributions to their respective fields and they have also contributed to the Uniondale community.

The Honorable Harry T. Edwards, Senior Circuit Judge, U.S. Court of Appeals for the DC Circuit, was president of Uniondale High School’s first graduating class. He earned his Juris Doctor law degree with honors in 1965 from the University of Michigan Law School. Across a long, productive career, he has received honorary degrees and awards for his work in law and legal education. He has co-authored five books and scores of law review articles, served as co-chair of the National Academy of Sciences Committee on Identifying the Needs of the Forensic Science Community, and is currently a full professor at the NYU School of Law.

Attorney Michael Coco has practiced law for years in Glen Cove. An Eagle Scout and a Rotarian, he has never stopped applying his energies to community service. Among his decades of work with the Rotary, he said, “I’m especially proud of our projects in Uniondale. We have supported the food pantry at St. Martha’s R.C. Church and a program in the elementary schools in the district known as ‘Gloves for Hugs,’ which provides winter coats, hats and gloves for children in need of them.”

Adebisi “Classique” Labinjo was inspired in early childhood by “Showtime at the Apollo” and “Star Search.” She taught herself to play violin and viola in grade school and achieved her dream of winning on “Showtime at the Apollo” three times by age 13. She is a songwriter as well as a singer. She has performed with fellow artists throughout the Tri-State Area, has shared the stage or opened for artists such as Bon Jovi, Foo Fighters, and Gym Class Heroes, and been featured in numerous music industry events like Bamboozle Festival in Asbury, New Jersey, and All-Star Music Award Show. She mentors youth and, as a well-rounded musician and creative artist, says of herself, “I’m not a sound, I’m an artist.”