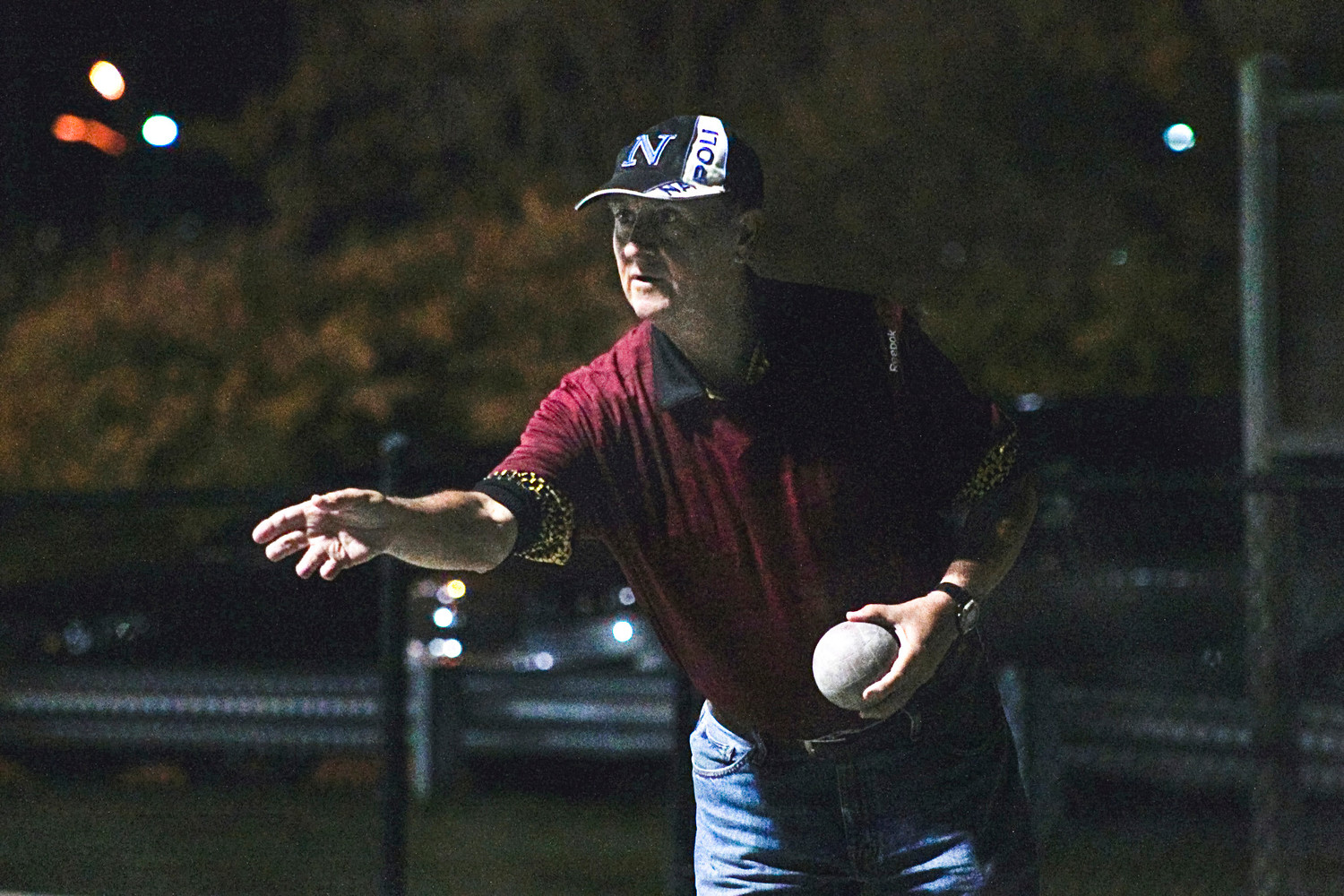 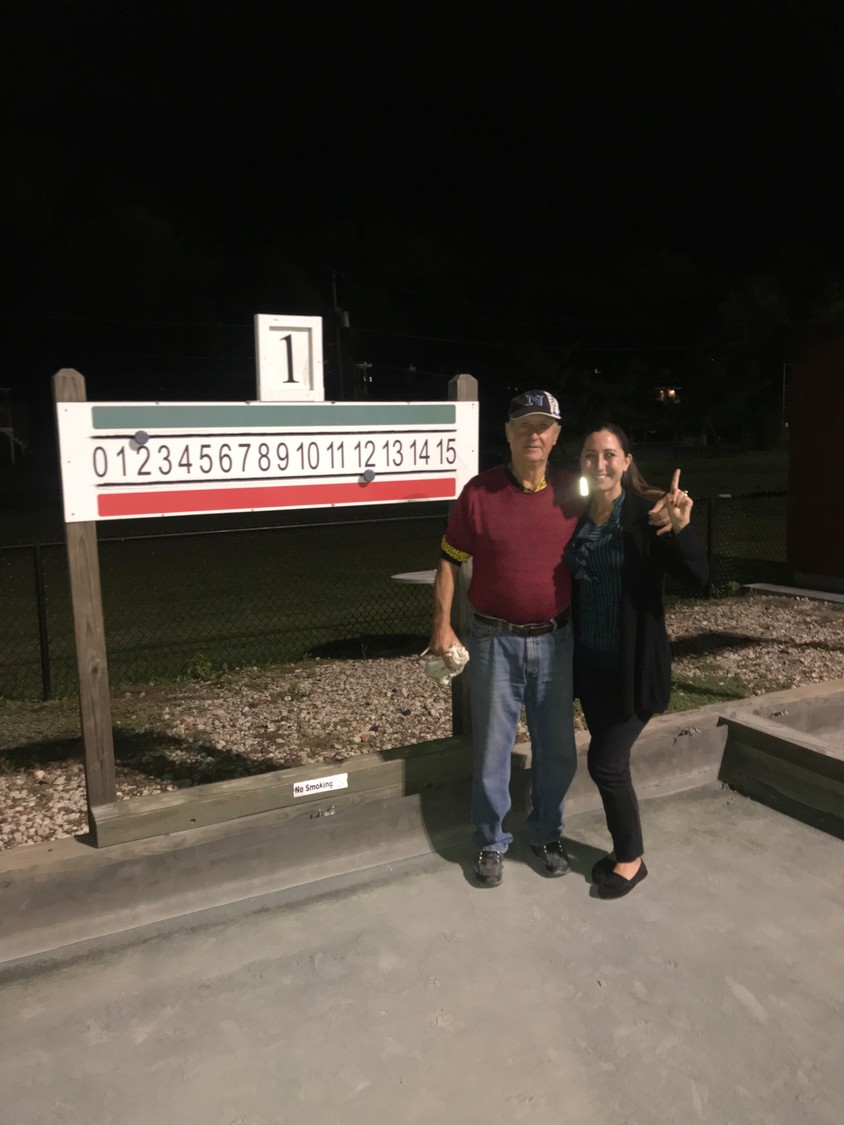 Visone with his daughter Christina in front of the scoreboard.
Courtesy Christina Visone
By Nick Ciccone

Sal Visone may be one of the most fiercely competitive, determined and meticulous bocce players in New York — and he knows it.

The 71-year-old Valley Streamer admitted, through a thick Italian accent, that he talks “like I’m Muhammad Ali,” but insists it’s with good reason. In October he won a singles championship sponsored by the American Bocce Club at Mill Dam Park in Huntington.

But when I called him to discuss his big win, his interest in bocce and his weekly visits to the natural clay courts at Juniper Valley Park in Queens, where his daughter, Christina, said “all the old goombahs” gather, he started talking about soccer.

Before I could ask a question, Visone began listing his finest athletic achievements in chronological order: He was named All-City center forward in soccer each year at Franklin K. Lane High School, and was a relentless scorer, besting his record each year: 19 goals in 14 games as a freshman, 25 as a sophomore year, 28 as a junior and 30 as a senior.

After graduating from high school in 1956, Visone played soccer in various men’s leagues. A teammate of his connected him to a job opening in the mailroom at Alitalia airlines, where he worked in different roles until about 10 years ago. The job allowed him to travel and play soccer in his free time, though his competitive spirit shined there, too — he bragged that he has won many contests working in telephone sales for the airline.

“If you like something, sooner or later you have a passion for it, and you become as good as you want to be,” Visone said.

He said he had tried out for both the Roma and Napoli clubs during their pre-seasons, hoping to make it as a professional soccer player, but that never happened.

Upon retiring from Alitalia, he took to refereeing for the Long Island Junior Soccer League — which he still does on weekends. If he’s refereeing during a Napoli match, though, his family members know to send the changing scores of the game to a cell phone he keeps in his pocket.

“But what about bocce?” I asked him, distracted by his obsession with soccer.

He immediately shifted gears and began touting his years of experience on the bocce court — both growing up in Italy, and now, mixing it up with friends on the courts in Queens.

Though well-versed in the game, Visone first played bocce in an organized league only last summer, at his son Franco’s urging. Franco, who teaches at South High School, wanted it to be a lighthearted family bonding activity, Christina said, but their father quickly became competitive. Along with a few other teachers from South High School, Franco and his father enlisted in the bocce tournament as a team.

“Frank would call me and say, ‘Dad’s nuts. This is crazy!’” Christina said, adding that her father would call her and say that his team members were “drinking beer and not taking it seriously.”

“He’s undoubtedly an exceptional player,” Franco said. “My dad has been playing for a long time . . . He tries to get into his opponents’ head. He intentionally tries to get under people’s skin. After the game, he’s the nicest guy ever, but during the game he’s super, super competitive.”

To Visone’s dismay, he and his son’s team didn’t take first place. That motivated him to enlist in the subsequent singles tournament, which culminated in October — to prove he was the best. He said he doesn’t comprehend not wanting to win.

“If I’m in your class, I would listen,” Visone said. “But on the bocce court, I can’t listen, because I’m really good . . . I like pressure, because under pressure — I’m intense, but like, controlled aggressiveness.”

Despite the occasional tension, Franco laughed off his father’s competitive attitude. “It was hysterical,” he said. “It was like a scene from a movie.”

Visone said he would be open to more competitive bocce tournaments in the future as his referee schedule allowed, noting that he’s “no spring chicken.”

Christina sent me several press-style video interviews she did with her dad while he wielded his trophy after the tournament, adding that he urged her to blast them out on social media. “More or less as I predicted, as I expected,” Visone boasts in one of the videos, apparently taken in his living room, “I played against a great opponent, and he had no chance . . . I destroyed him.”

Unashamed of his competitive attitude, Visone insists he’s just a guy who knows what he’s doing when it comes to sports. His bravado has the capacity to disarm, endear, and at times, by his own admission, infuriate those who encounter him. He noted that as a referee, he is used to getting shouted at by people who “don’t understand the game.” But he merely wants to teach people to become as strong a player as he is — regardless of the sport. He is eager to share his gifts with others.

Toward the end of our conversation, Visone insisted that I come to Juniper Park to play bocce with him, so I could see him at work. “C’mon,” he said, “I’ll buy you pizza.”

I told him I might take him up on his offer at a later date, once I’d had more time to practice.

VSC eyes a couple of rematches