Incidents of antisemitism prompt a resolution 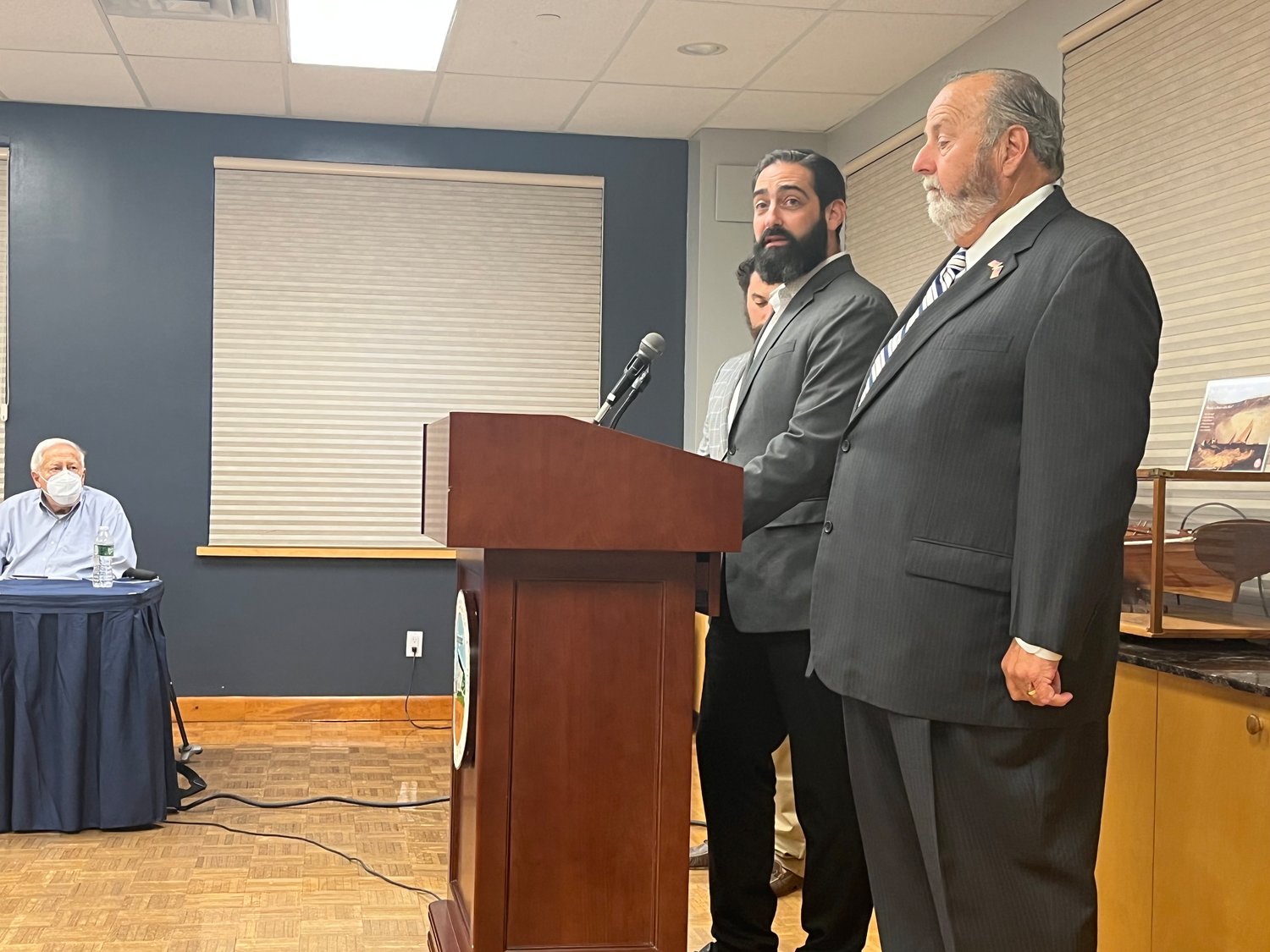 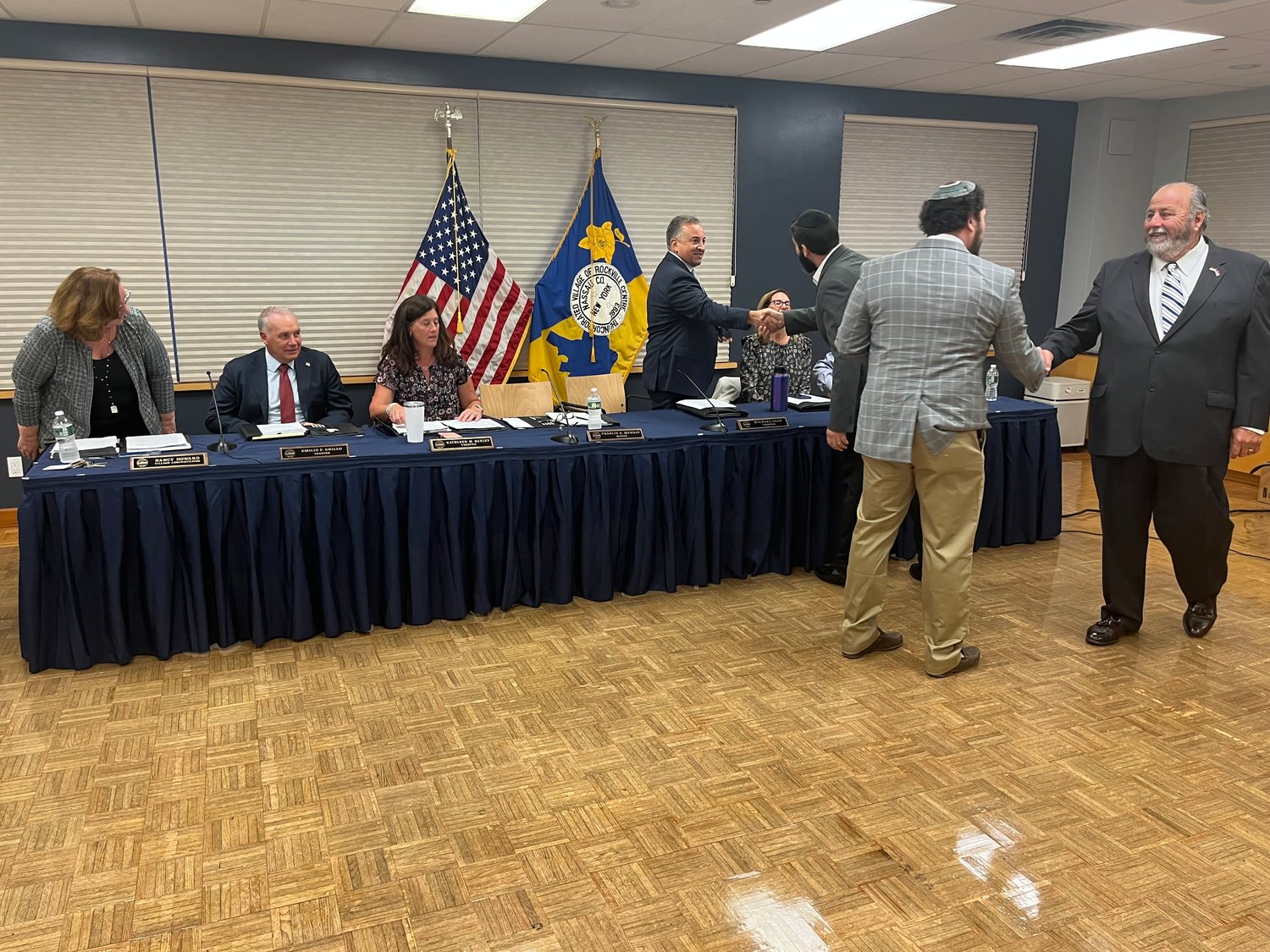 Rabbi David Lerner, of B’nai Sholom-Beth David, and Rabbi Michael Cohen, of Central Synagogue of Nassau County, met with members of the RVC village board.
Daniel Offner/Herald
Previous Next
By Daniel Offner

In light of reports of antisemitic propaganda popping up across South Shore communities, the Village of Rockville Centre passed a resolution pledging to combat antisemitism and to educate residents on ways to identify and report such acts when they occur.

“Antisemitism, including harassment on the basis of actual or perceived Jewish origin, ancestry, ethnicity, identity, affiliation or fate, remains a persistent, pervasive, and disturbing problem in American society,” Mayor Francis Murray read from the resolution during the board meeting on Sept. 7. “Government officials and institutions have a responsibility to protect citizens from acts of hate and bigotry, including antisemitism, and must be given the tools to do so.”

The announcement comes after numerous reports from residents of antisemitic literature that was distributed around the community.

The resolution also comes just six months after resident Michelle Zangari made national headlines for a series of antisemitic remarks directed at a neighbor, claiming that a large menorah on their front lawn was an indication of plans to convert the home into a house of worship.

The home is actually the Chabad of Rockville Centre, a Hasidic organization known for its outreach. The Chabad’s rabbi, Mendel Gurkov, and his wife, Rivka, moved to Rockville Centre last October.

Zangari, the owner of MZ Interior Design, said that she had lived in the Five Towns for almost 20 years, and at a village board meeting on April 4, she voiced her fear that the Orthodox Jewish community was moving into the village.

“Freedom to practice religion and freedom to live where one chooses are right guaranteed by the Constitution,” Nassau County Executive Bruce Blakeman said in a statement following the April meeting “The remarks made by the resident at a recent Rockville Centre village board meeting were offensive and un-American. It is the duty of the responsive public officials to condemn the type of antisemitic hate speech that was in evidence at the Rockville Centre village board meeting.”

Since then, Murray and the board have been working to codify a community stance against antisemitism. “We’ve been working very hard to get it done,” Murray said. It includes the International Holocaust Remembrance Alliance’s definition of antisemitism, “a certain perception of Jews, which may be expressed as hatred towards Jews.” That hatred can be manifested in “rhetorical and physical manifestations of antisemitism directed toward Jewish or non-Jewish individuals or their property,” including Jewish community institutions and religious facilities.

Rabbi David Lerner, of B’nai Sholom-Beth David, and Rabbi Michael Cohen, of Central Synagogue of Nassau County, said that they appreciated the efforts of the village to identify and combat hate speech. “It is unfortunate that such a proclamation is needed,” Lerner said, “but hate and divisiveness have, tragically, been a growing trend in the world today, as the mayor mentioned, with regard to the effects on the Jewish community.”

Lerner added that according to a study by the American Jewish Committee, 25 percent of Jewish-Americans reported being the target of antisemitism in 2021. “That’s one in four people of the Jewish faith, who personally experienced direct hate in a public setting,” he said. “This is shameful, and it must be confronted.

“We are better than this,” Lerner said. “And I see it in Rockville Centre. We are a village of neighbors greeting each other on the street, and planning block parties and barbecues. Our children, playing together and growing together. We’re a community of love. And because of that fundamental value, we stand up against hate when it creeps into our neighborhoods.”

Lerner said he was grateful to the village leadership for reflecting these principles and for taking a united stand against hate. “We will preserve our common values and protect our neighbors, because we are all one,” he said. “I want to again thank Mayor Murray, Deputy Mayor [Kathleen] Baxley and the village trustees, and to all my neighbors and friends in Rockville Centre for the strong relationships we have built, all of the meaningful conversations we have had, and this important step in fighting against hate. We stand strongest together and will continue to be united in this fight.”

Rockville Centre resident and Vice Chairman of the Nassau County Planning Commission Jeff Greenfield, said he was grateful for the board’s response and for its willingness to work collaboratively with the rabbis in the community to combat the spread of antisemitism.

“I personally appreciate the mayor’s statement and the village trustees adopting this strong position with regards to antisemitism,” Greenfield said. “I think it’s groundbreaking that this village, who has been in the press and taken the brunt of issues, is amongst the first villages in the area to make a strong statement. It’s unfortunate that antisemitism has been on the rise in the New York metropolitan area.”

After the resolution was passed last week, Murray said he would attend services and speak to the congregations of both synagogues during the High Holy Days.