Students honor hometown heroes for their service to the community 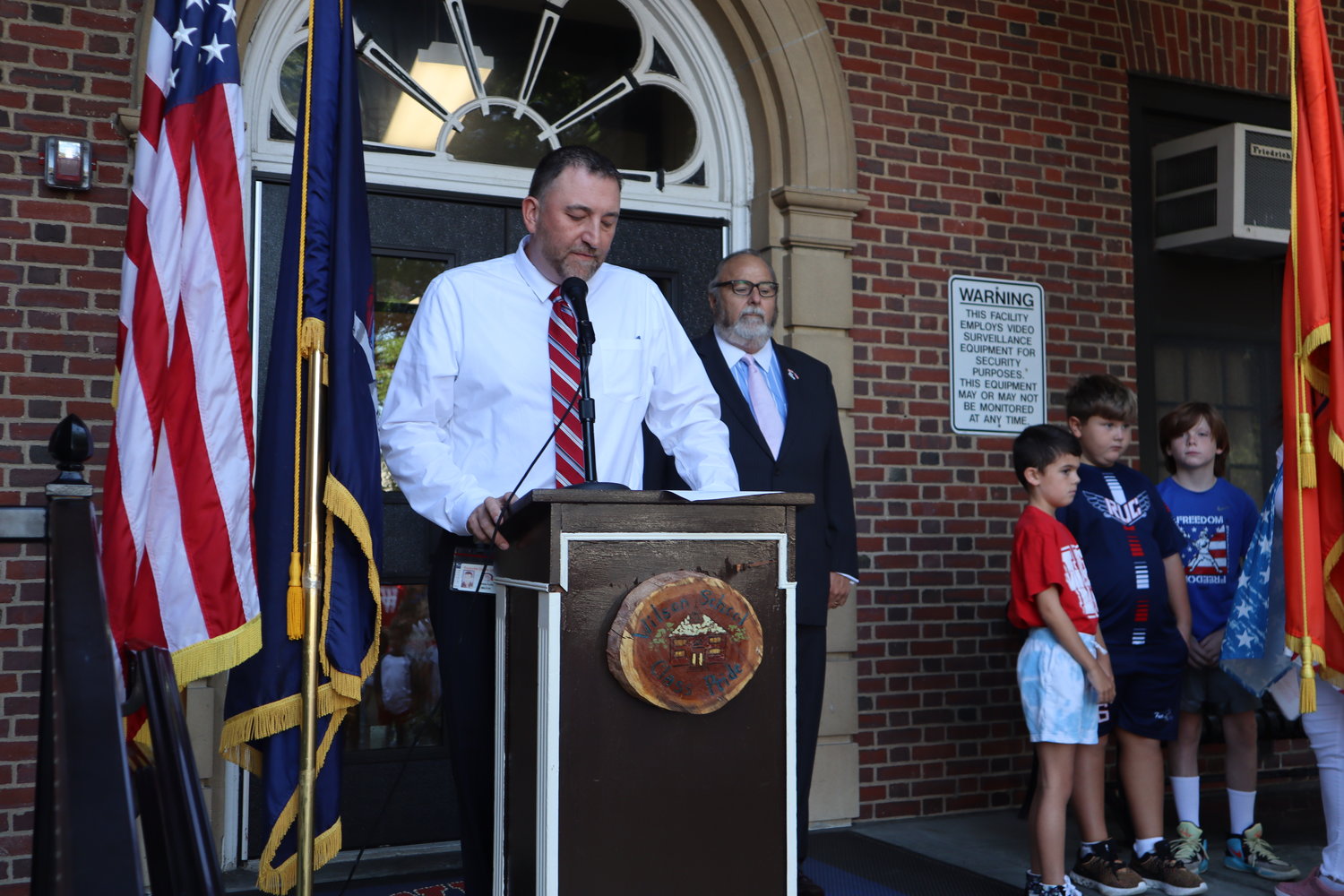 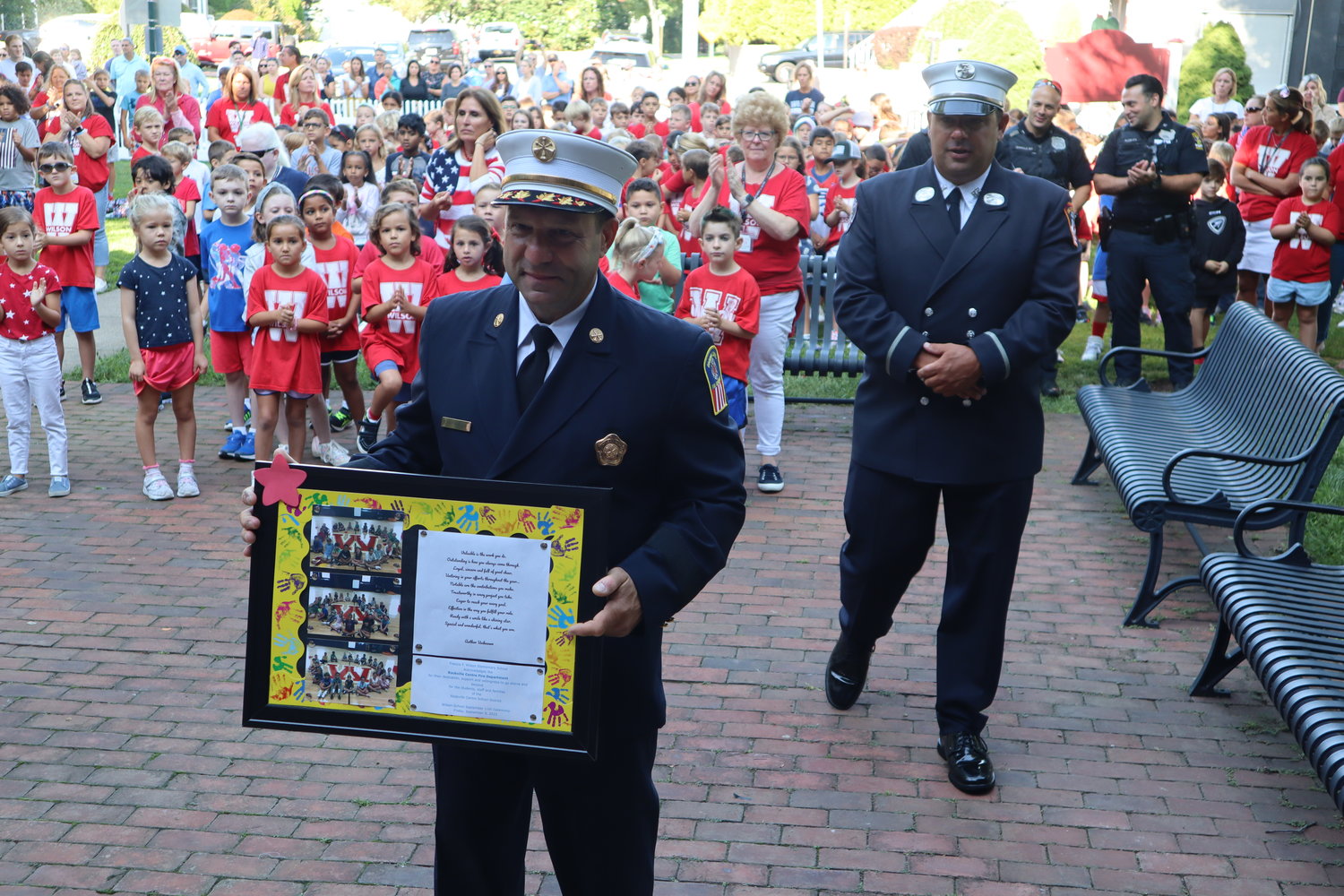 Members of the Rockville Centre Fire Department receive a plaque, provided by Wilson Elementary students, honoring them for their service.
Daniel Offner/Herald 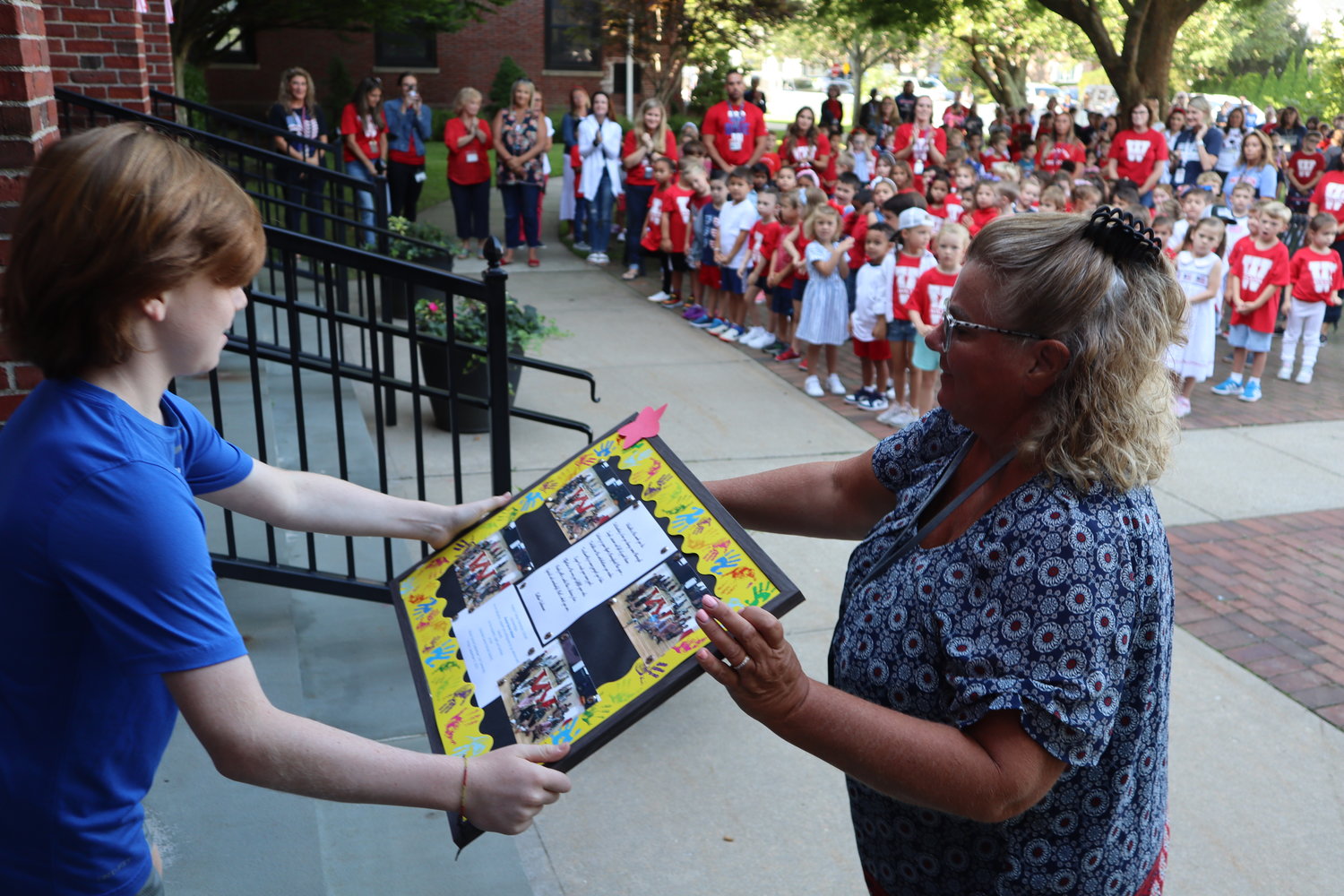 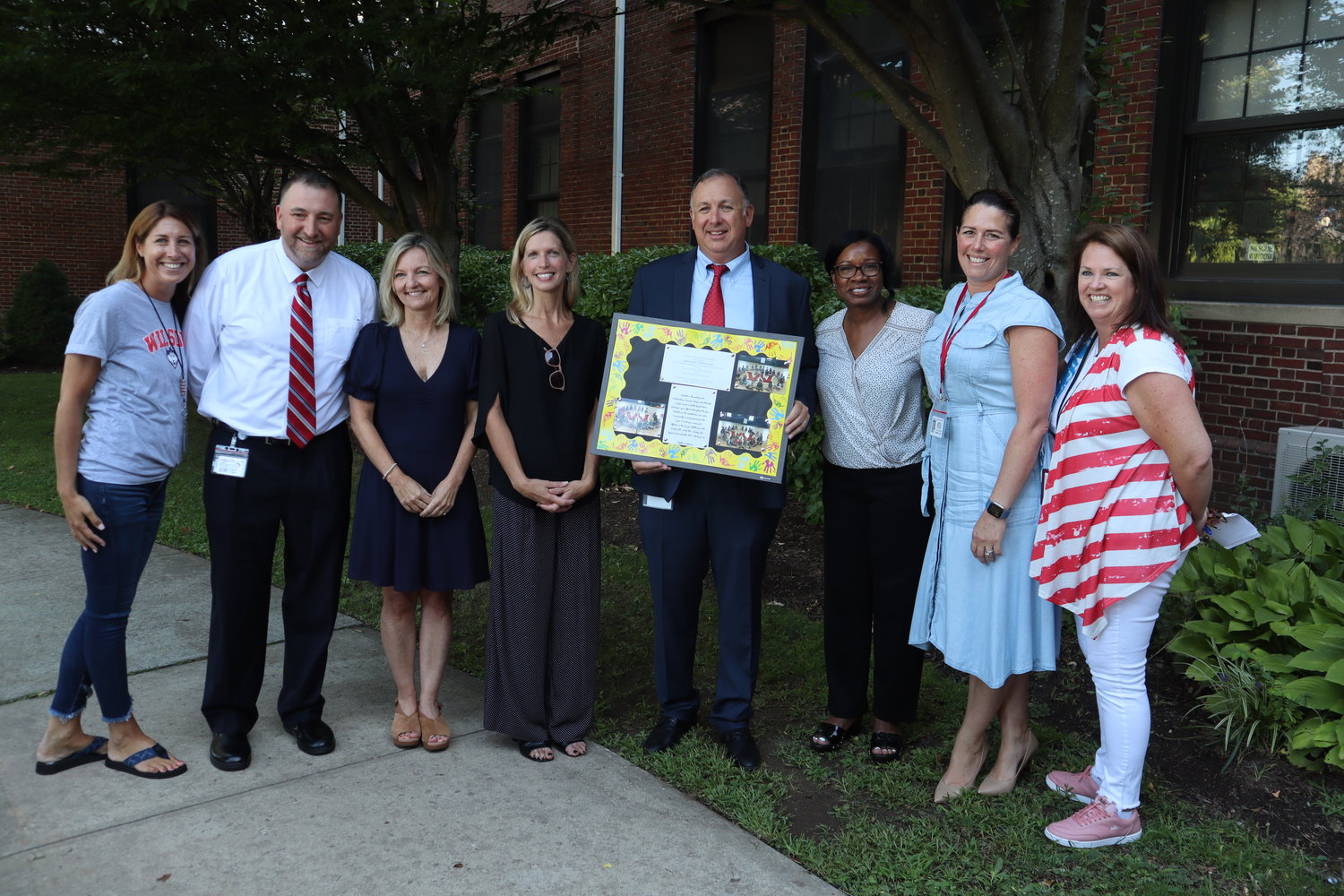 Wilson Elementary School teachers, faculty, administrators, and members of the Board of Education join Superintendent Matthew Gaven, at center with plaque, during Spirit Day.
Daniel Offner/Herald 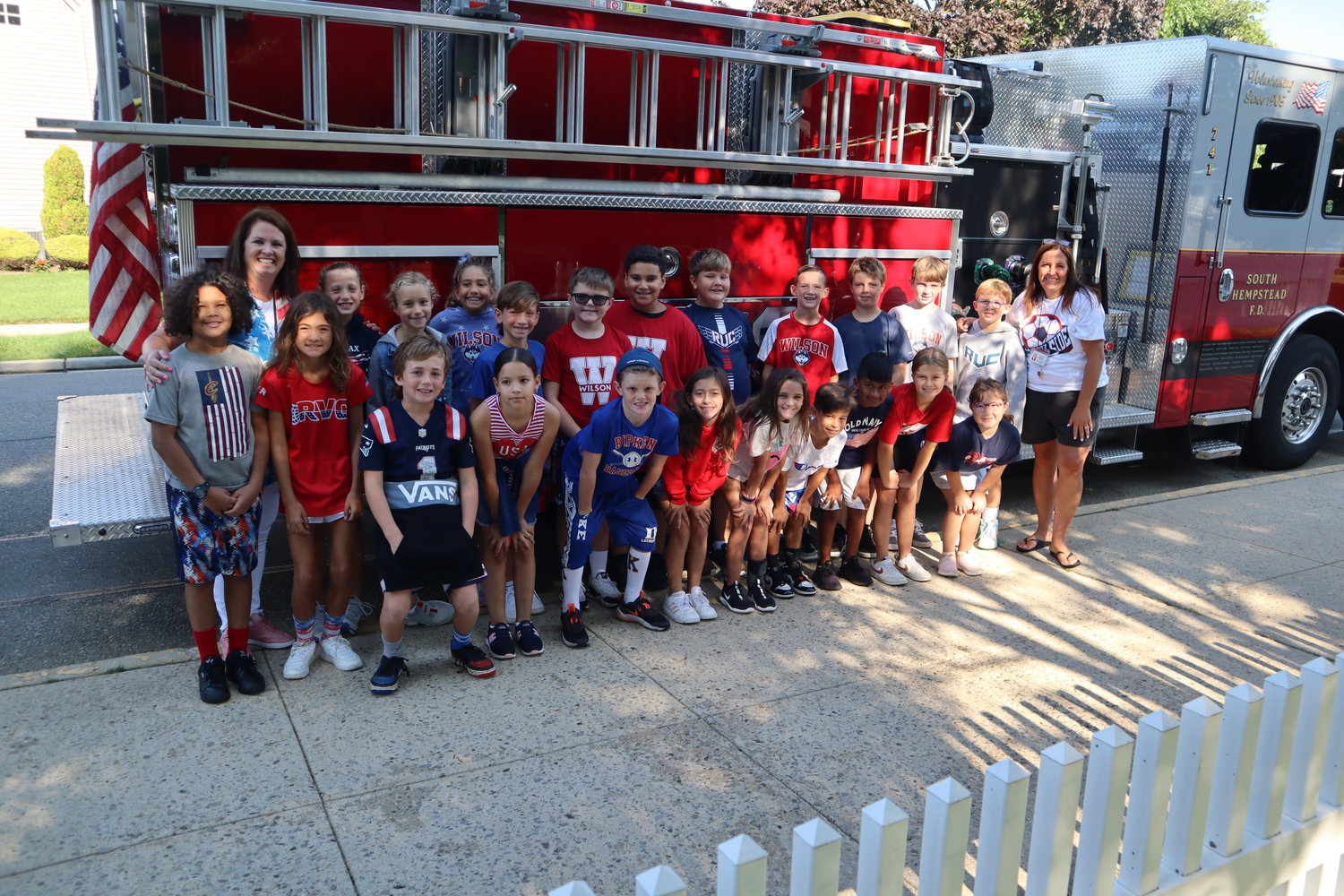 Wilson Elementary teacher Kara Spinelli leads her class in a discussion about the names written around the fire truck.
Daniel Offner/Herald
Previous Next
By Daniel Offner

In an effort to help teach kids who are too young to have witnessed the events that took place on 9/11, teachers at Wilson Elementary are educating students about that day with lessons focused on the community and those who helped, what their roles are, and why it is that we come together to honor those we lost on that day.

“It started as an announcement over the loudspeaker a year after it happened, so 20 years ago, and it has grown and grown, and now it’s a part of our curriculum. It includes reading books, writing about it, reaching out to community members, and things like that,” Wilson teacher Kara Spinelli said. “In the beginning, nobody wanted us to do this. They thought it was too scary for the kids to think about, but we insisted that we do at least an announcement on the day.”

Spinelli said it was from this gesture made more than two decades ago—a simple morning announcement—that inspired her and Courtney Schuh, a fellow teacher at Wilson, to create the Spirit Day ceremony at the school.

Spirit Day has since become an annual tradition, bringing students together outside to honor local heroes in the community for their bravery, hard work, and dedication.

Wilson elementary teachers, as part of the curriculum, also teach students about the events of 9/11 throughout the year with a series of picture books. These include such titles as “Keeping the City Going” by Brian Floca, “The Man Who Walked Between The Towers” by Mordicai Gerstein, “Fire Boat Fireboat: The Heroic Adventures of John J. Harvey,” “This Very Tree” by Sean Rubin, and “30,000 Stitches: The Inspiring Story of the National 9/11 Flag” by Amanda Davis.

Wilson students gathered outside on the front lawn of the school, early on Friday morning, for the start of this year’s Spirit Day ceremony.

Wilson school Principal Jim Duffy kicked things off with a few words to the students, where he expressed the importance of why we continue to remember the attacks from 21 years ago.

“We remember the men and women lost their lives and the many sacrifices that were made that day,” Duffy said. “We honor the heroes for their service, their dedication and willingness to sacrifice their lives to protect others and to keep us safe.”

“9/11 was the worst attack on American soil,” Mayor Murray said, addressing the crowd of youngsters too young to remember the events of 9/11. “Over 2,900 people lost their lives that day. Our brothers and sisters, aunts and uncles, our parents, our friends. We still mourn them and more importantly we vow never ever to forget them. And I’m so glad that this school, in this village, will keep that memory of those people in our hearts forever.”

Following the ceremony, students in Spinelli’s class were given a sneak peek at the fire engine, and the many names displayed all across it, which include the many brave FDNY firefighters who rushed into danger on that fateful morning 21 years ago.