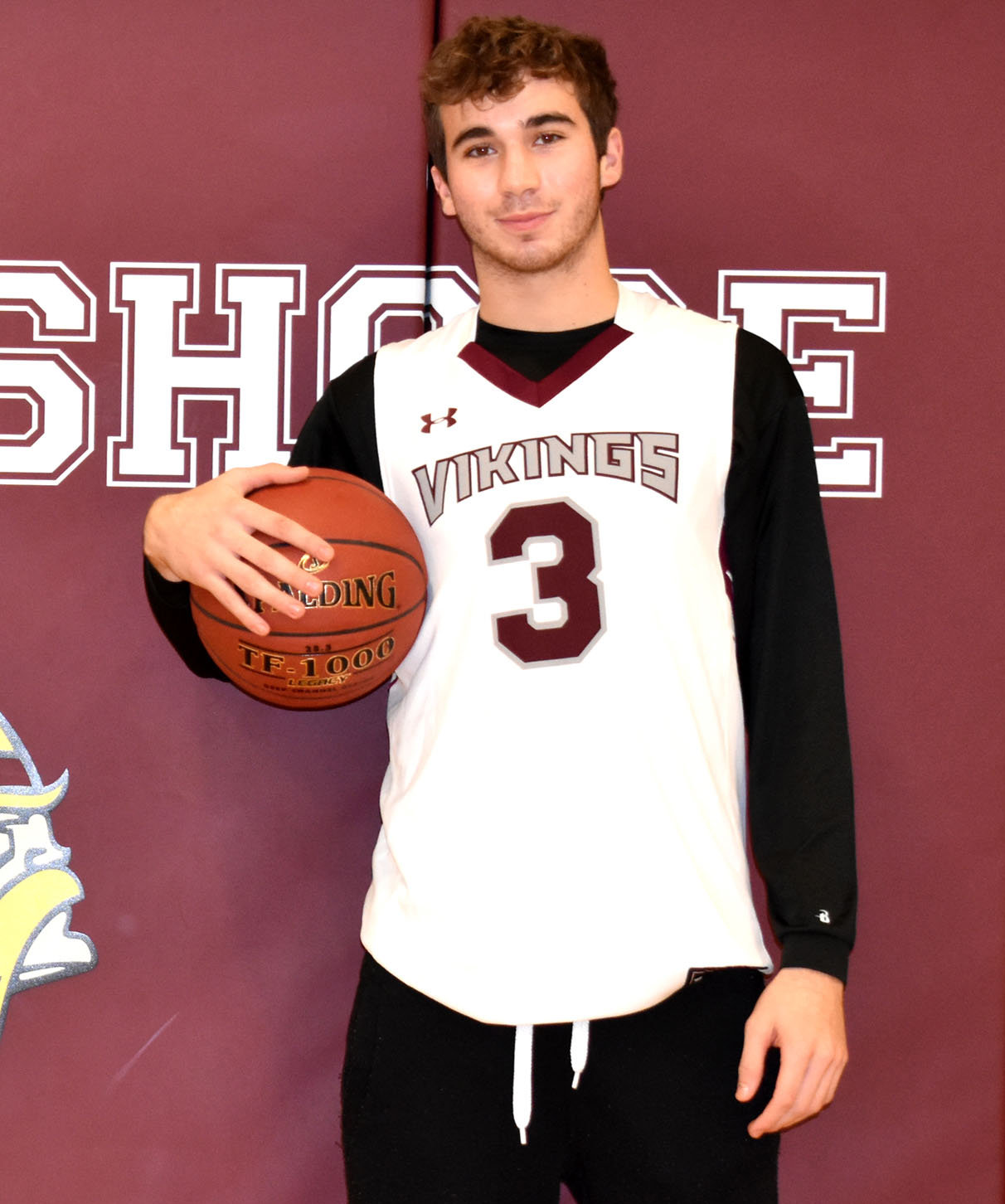 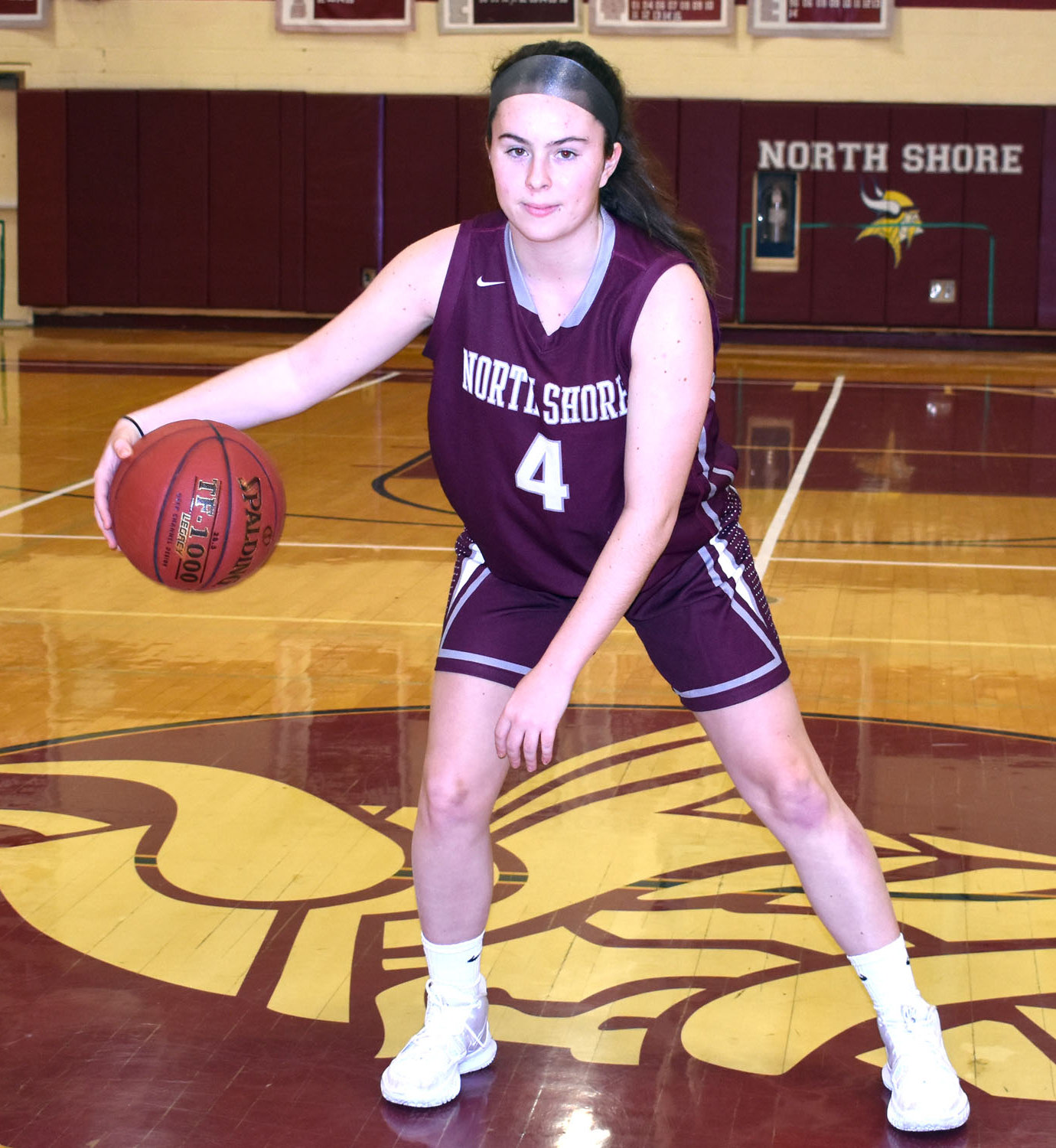 All-County point guard Morgan Griffin is the key to the Vikings’ success.
Courtesy Shelly Newman
Previous Next
By Marc Fishkin

The hope is karma from North Shore football will spill over to the boys' basketball squad – and girls' team, too.

Expectations are high more titles could be on the way for the maroon and white.

The football guys missed the first two weeks of basketball practice as they made history. Berlin missed a total of three weeks because he contracted mono after the championship win.

“I thought he'd be weakened, but he's ready to go,” Berglin said.

Au contraire. Berlin played just 8 minutes in his return but since being put back into the starting lineup, he’s averaging 24.5 points. He’s a 6-foot-4 do-everything forward who scores most of his points inside.

He’s ranked among the top 100 players on Long Island. His coach compares his style to Knicks forward Obi Toppin because of the energy he brings.

“He's got one of the things you can't teach – a motor,” said Berglin, the JV boys coach the past 10 years before replacing Kevin Carpenter. “He's got as high a motor as any kid I've ever coached. He doesn't stop.”

Their long football-title journey may have caused fatigue but ultimately Berglin believes the journey will help.

School spirit is at an all-time high because of the championship. Bigger crowds than norm are expected. A large throng attended its home-opening victory over New Hyde Park on Dec. 16. “We've got great mental toughness,” Berglin said. “Any adversity we've handled extremely well.”

The girls' team should match the boys in challenging for the A-5 title – spurred by star 5-8 guard Morgan Griffin.

Keith Freund is in his 16th year coaching the team. The Vikings are coming off a 6-3 record in the pandemic-shortened campaign.

Freund has strung together a potent non-league schedule to get the girls prepared for conference play that included Catholic League power, Mercy and the Locust Valley juggernaut. North Shore was 0-4 in four competitive games before winning two straight including the conference opener.

“I wouldn't schedule the non-league schedule I did if I didn't think we could handle it,” Freund said. “The A-5 is wide open. I can see us making a run in the playoffs. I've told them the record in December means nothing. These non-league games were designed with February in mind.”

The Vikings will be a dangerous playoff foe if Griffin continues her domination. An All-County point guard, Griffin is averaging 19 points. She's buried 17 3-pointers in the first five non-league games alone and is a college prospect.

“She can handle, sees the court well, shoots the rock,” Freund said. “A complete player.”

The defensive culture is set by small forward, Kylee Colbert. She's down to play lacrosse at Boston College but buzzes maniacally around the hardwood, too. “Tremendous athlete who plays tremendous defense,” Freund said. “Super strong, never gets tired. Just has a really high motor and never stops moving.”

“The strength is our depth,” Freund said. “We play a lot of kids, move the ball nicely. We're very deep with energy and endurance.”

It was a banner football year for North Shore. Now Vikings basketball will try to keep the good vibes rolling.