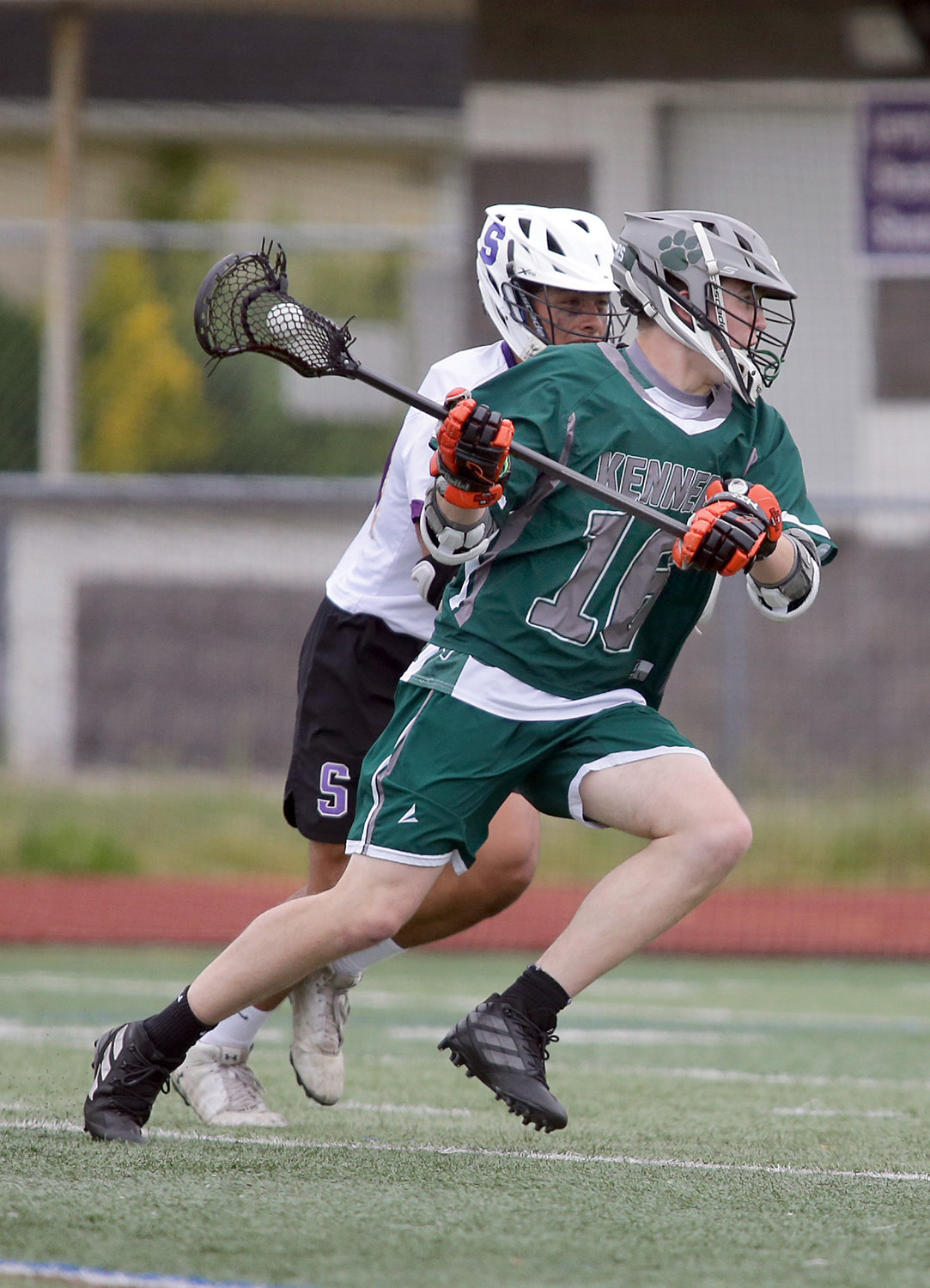 Junior midfielder Liam Schillinger has been a key contributor for the Cougars, who are 8-5 and set for a playoff appearance.
Brian Ballweg/Herald
By Jamie deJong

Kennedy boys’ lacrosse is looking to put the finishing touches on what has been a solid 2022 campaign.
With two games left in the regular season, the Cougars are looking to get healthy and tinker with a few things to be at their best for the postseason. However, looking back on the year, coach Craig Papach said he’s proud of how his team has dealt with several obstacles.
“We’re very pleased with how the season has gone,” Papach said. “We have a lot of new guys and we’re still in the rebuilding mode. We’re definitely happy with the way things have gone so far. Before the year, we set goals that didn’t involve winning or losing. I wanted to create guys that wanted to play lacrosse and I think we’re doing that.”
In a way, the Cougars’ year has been a tale of two halves. They were 5-1 until senior attackmen Max Zaransky broke his hand against Baldwin, and at the time he was the leading scorer in Nassau County.
Papach noted that depth was not necessarily a strong suit, so it was an adjustment period heading into what was a tough portion of the schedule. It is difficult to adjust an entire offensive identity on the fly, but other players have stepped up. Junior Joseph Battaglia has become the go-to guy on offense and has handled the increased responsibility well and junior Liam Schillinger has also been efficient in the midfield. Junior Dylan Estrin has also picked up the scoring.


In many ways, the Cougars relied on their defensive unit to pick up the slack, and the group was up to the task. Junior goalie Benjamin Greco has been lights-out in the net all spring, and his character has matched his play level, as according to Papach he has been “a class act and has been a super goaltender the entire season.”
Sophomore Finn Lofton has become the main option the clearing game and has done exceptional considering his assignment is covering the opposition’s best player. Junior Richie Ippoliti Is relatively new to the faceoff position, but through his competitive nature he has been adept in securing extra possessions for the Cougars despite his lack of experience.
The Cougars have an 8-5 record and have all but wrapped up a place in the Nassau Class B playoffs. With Zaransky having a chance to return for the playoffs, they could make some noise down the stretch, but however things go Papach is proud of how his unit has played and grown this season.
“This has been a successful season,” Papach said. “If we can finish with 9 or 10 wins it’s an incredible accomplishment. We never really judge the seasons off wins and losses anyhow as we have great kids who work hard and that’s really what matters. Going forward, we’re still trying to figure out our best offensive groupings but we’re still going to try and figure things out going into the playoffs.”