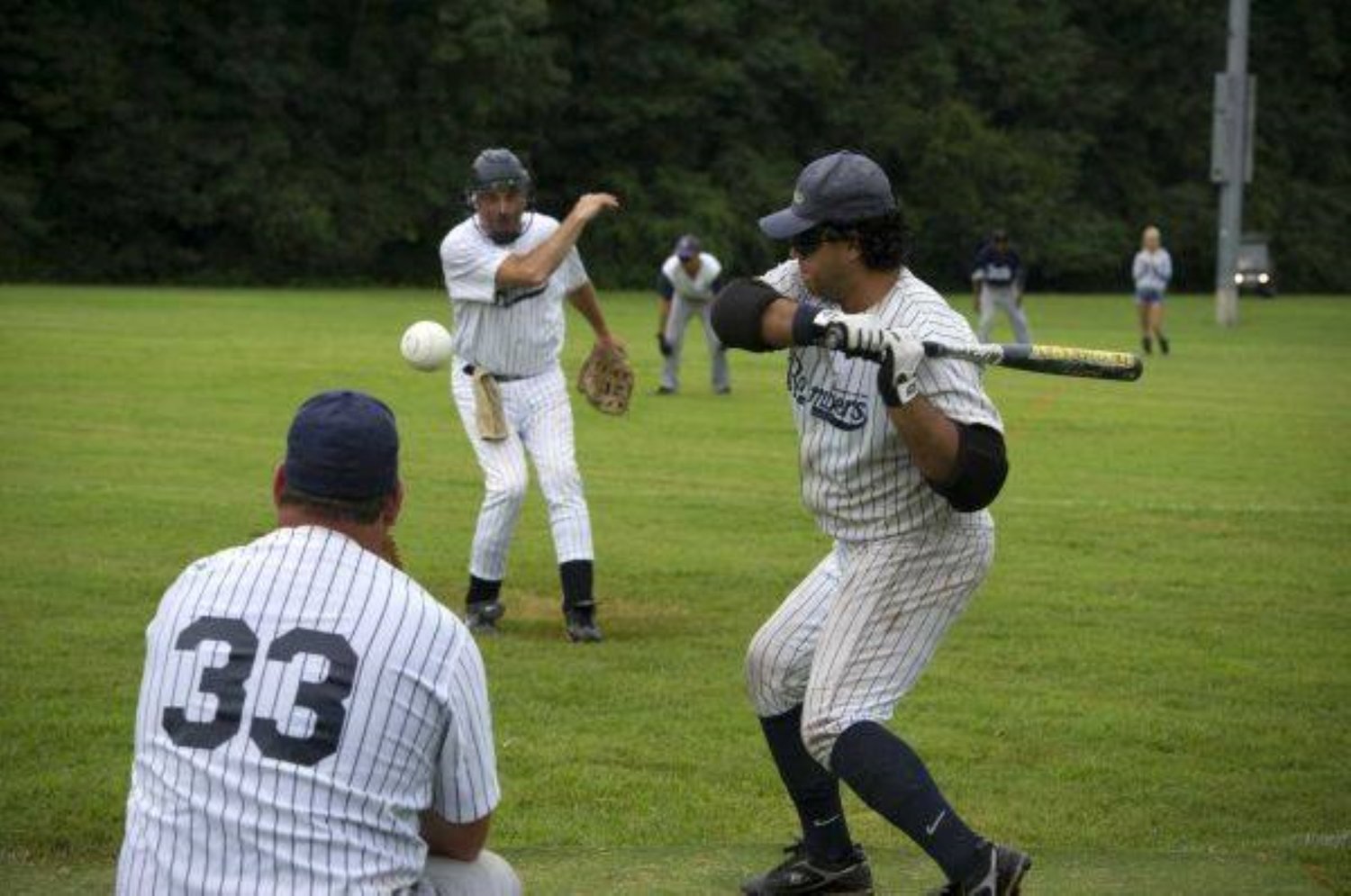 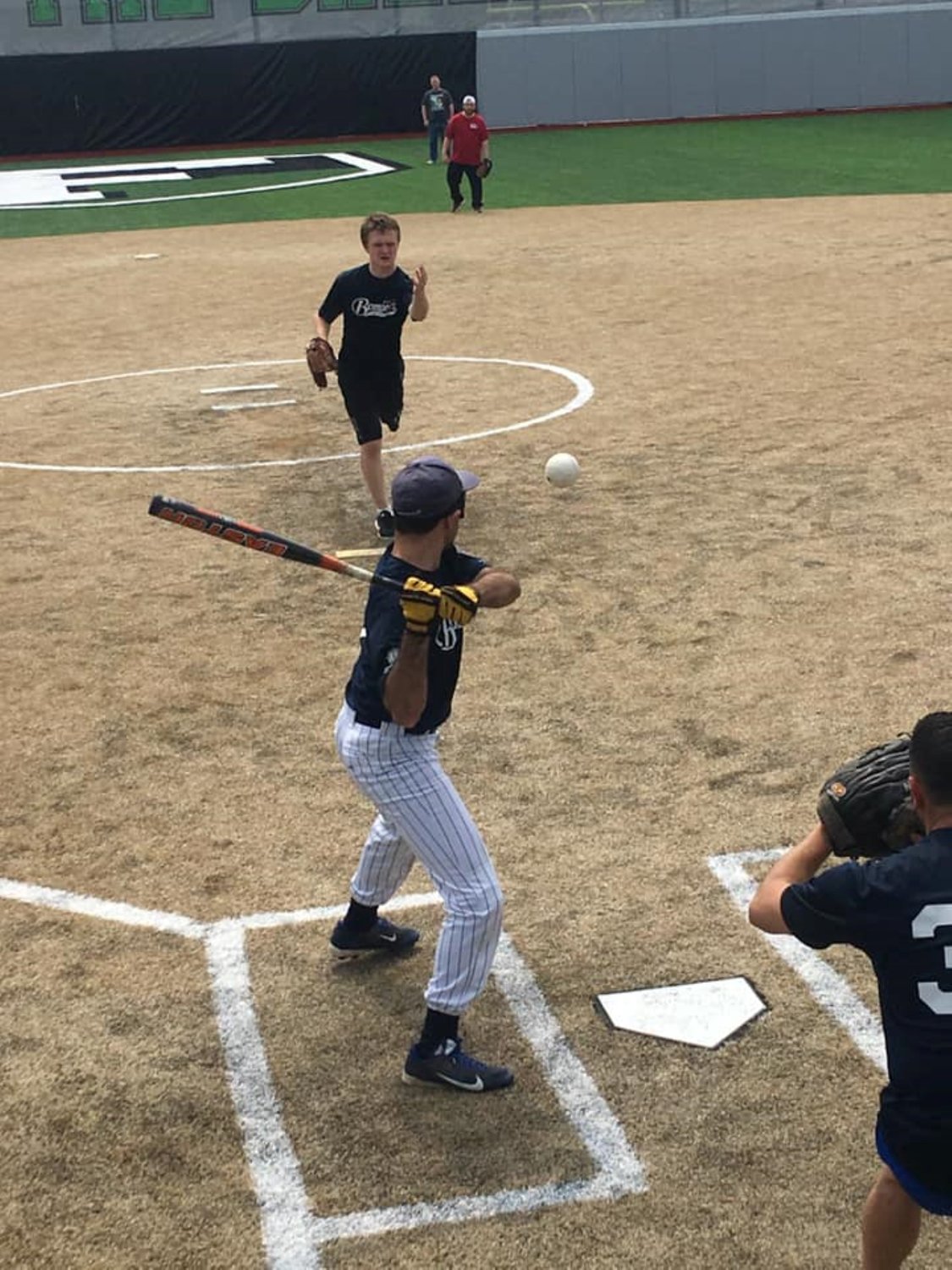 The Bombers have played in games and tournaments all across the country, from Texas to Massachusetts.
Courtesy LI Bombers
Previous Next

We’re just educating people that, you know, with persistence you can really do anything.”
Ted Fass, Manager, Long Island Bombers
By Will Sheeline

The Sea Cliff Glen Head Lions Club will host a baseball game matching the Long Island Bombers, a team of visually impaired players, against the Sunset Mets of the L.I. Midweek Baseball League, to prove that you don’t need to see the ball to play the game.

The exhibition game is scheduled for May 14, at 1 p.m., in Glen Cove’s City Stadium Park, and will raise money for the Bombers organization.

The Bombers first came to the attention of the Sunset Mets — a team for those 52 and older — when the Mets’ manager, John Alutto, was playing in a tournament in Florida last year. Alutto, who operates an online baseball card and memorabilia business, overheard players talking about a “beep ball” team in Rockville Center.

“Right away my antennas went up, since my buddy who I play with, Joe Esposito, has a blind son,” Alutto said. “His son is now a rookie on the team. I got to see them practice last March, and they’re just phenomenal. These guys just love baseball.”

Peter Munda, a Glen Head chiropractor who plays with Alutto, is a member of the Lions Club, and said he was proud to help organize the event. The Lions work with the visually impaired in a wide range of activities.

“To do something like this, to help a team like the Bombers, it’s amazing,” Munda said. “The determination and hustle of these guys is just phenomenal, and it’s great that we’ll be able to give them a platform.”

Former U.S. Rep. John LeBoutillier, of Westbury, will serve as the game’s announcer. Both teams will play blindfolded, in the interest of fairness, and will be playing beep ball, a version of the game designed for blind ball players.

What is beep ball?

Ted Fass, of Rockville Center, has been blind since he was 11, when a tumor severed his optic nerve. He was a huge baseball fan, but his disability forced him to hang up his Little League cleats.

Then, thirty five years later in 1998, when Ted and his wife, Gail, were working as mobile DJs, Steve Guerra, a visually impaired stranger, approached Fass after the show. Guerra told Fass about a new game he had heard of called beep ball.

“He told me about the game and asked me if I was interested in founding a team,” Fass recounted. “And it was just really exciting to me, you know, that there was some form of baseball for the blind, ’cause I really missed it, you know.”

Fass and Guerra founded the Long Island Bombers that year, and although Guerra later left the area and Fass became the team manager, the Bombers have continued to grow over the years. They’ve played at both Yankee Stadium and Citi Field, and in tournaments from Boston to Philadelphia.

In beep baseball, or beep ball, a larger ball, similar to a softball, contains an electronic device that emits a beeping sound so players can hear it as it comes their way.

There are just two bases, first and third, and instead of traditional bases, they are 5-foot-tall foam-filled columns containing buzzing mechanisms. When a batter hits the ball, either first or third base is randomly activated and starts buzzing, and the batter runs toward the buzz. If a fielder from the opposing team picks up the beeping ball before the batter reaches the buzzing base, that’s an out. If the batter reaches the base first, the batting team scores a run.

The team in the field has six fielders, but the pitcher and catcher are sighted members of the team that’s at bat. There are also two sighted “spotters” who call out the to the fielders where the ball is headed. Because there are varying levels of vision among the players, all batters and fielders wear blindfolds.

According to Fass, events like next month’s game are essential to the Bombers, not just as a way to raise money, but also as a way to educate the public about blindness.

“I really enjoy this, because the reaction that people have when they watch us is just unbelievable,” Fass said. “We’re just educating people that, you know, with persistence you can really do anything.”