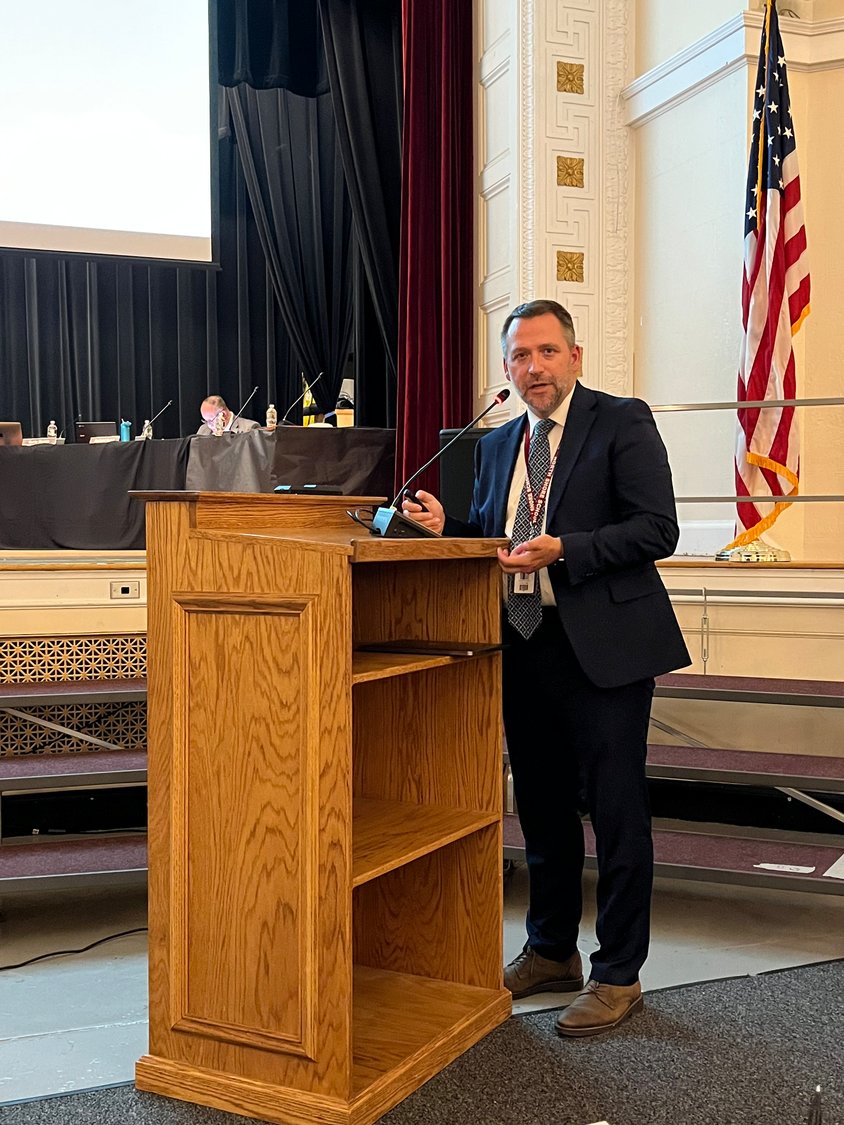 Superintendent Chris Zublionis helped explain the basics and necessity of a capital reserve to North Shore community members.
Will Sheeline/Herald

We want to clarify some of that information, and explain how, in our view, this could be a tool to consider as we plan for the years ahead.”
Chris Zublionis, Superintendent, North Shore School District
By Will Sheeline

Class was in session, and North Shore School District Superintendent Chris Zublionis and James Pappas, the assistant superintendent for business, offered a primer on capital reserve funds.
Zublionis and Pappas had a captive audience at the Sept. 22 district Board of Education meeting to discuss the possibility of creating a new capital reserve to fund current and future projects. They explained what a capital reserve is and why it may be necessary, and gave a brief history of the district’s use of capital reserves in the past.
“With everything going on with the budgeting cycle, with LIPA, I think there’s some confusion about the capital reserve, its processes, and some concern about the fiscal state of the district,” Zublionis said. “We want to clarify some of that information, and explain how, in our view, this could be a tool to consider as we plan for the years ahead.”
A capital reserve fund is used by school districts to pay for capital projects, which are investments or improvements in infrastructure. Capital projects tend to be larger in scale, and cost more, than most repairs or minor updates to school buildings.
Zublionis and Pappas acknowledged that the community may be concerned about creating a new fund while the district is still waiting to see what the impact will be from the property tax settlement with the Long Island Power Authority. Creating a capital reserve fund, they said, was the most fiscally responsible course of action.


“It’s an important tool for planning,” Pappas said. “It allows you to set aside funds over a period of time and not affect the budget in any one year. It allows for the maintenance and upkeep of certain items throughout the buildings, whether it be roofs, windows or athletic fields.”
Creating a capital reserve in these challenging times, they explained, is not an example of reckless spending, but instead shows fiscal prudence and long-range planning. By potentially creating a capital reserve, the district will be able to address pressing infrastructure and asset concerns without dipping into other emergency funds.
The capital reserve is essentially a savings account that will grow over a number of years to address specific capital projects. Rather than raising money for projects by increasing taxes, the funding comes from budget transfers, leftover money from the annual budget, and other cost savings. In the past 20 years, the district created, or attempted to create, two capital reserves. One passed in 2008, and lasted until it was closed in 2018. The 2016 attempt to establish a capital reserve for another decade failed.
Establishing a capital reserve can be risky. because it requires a special vote. First, there needs to be a presentation of a proposition detailing the purpose of the fund, how much money will be raised, how it will be raised and how long the fund will operate.
While the board has not put forward such a proposition, some community members at the meeting said they were concerned. Some are worried about using district money at a time of fiscal uncertainty and others are concerned that some projects would not be prioritized.
“I’m a little bit worried about the capital reserve,” Joanna Clancy of Glen Head said. “I’m a little bit concerned that our turf will be part of that capital reserve, since it’s such a long-term process and we have to vote on it, and we’re in dire need of a new turf.”
Several board members asked questions saying they were concerned about the potential risks of establishing the capital reserve. Trustee Marianne Russo pointed out that some projects may have to be abandoned altogether if the capital reserve failed.
“I’m concerned that if we don’t have the vote until March, and there’s things in that capital reserve that we think are health and safety issues,” Russo said. “If that capital reserve fails, we don’t have time to go back and put them in the budget.”
Others expressed support for the potential measure, citing it as an opportunity to get much needed updates to the district’s infrastructure without drawing too much from the district’s reserves or the community.
“I worry that people in the community are going to say, ‘Why are we talking about a capital reserve when we are in the midst of this LIPA crisis,’” the board’s vice president, Andrea Macari, said. “The answer really is it is because of the LIPA crisis that we need the capital reserve, really now more than ever.”
Report an inappropriate comment