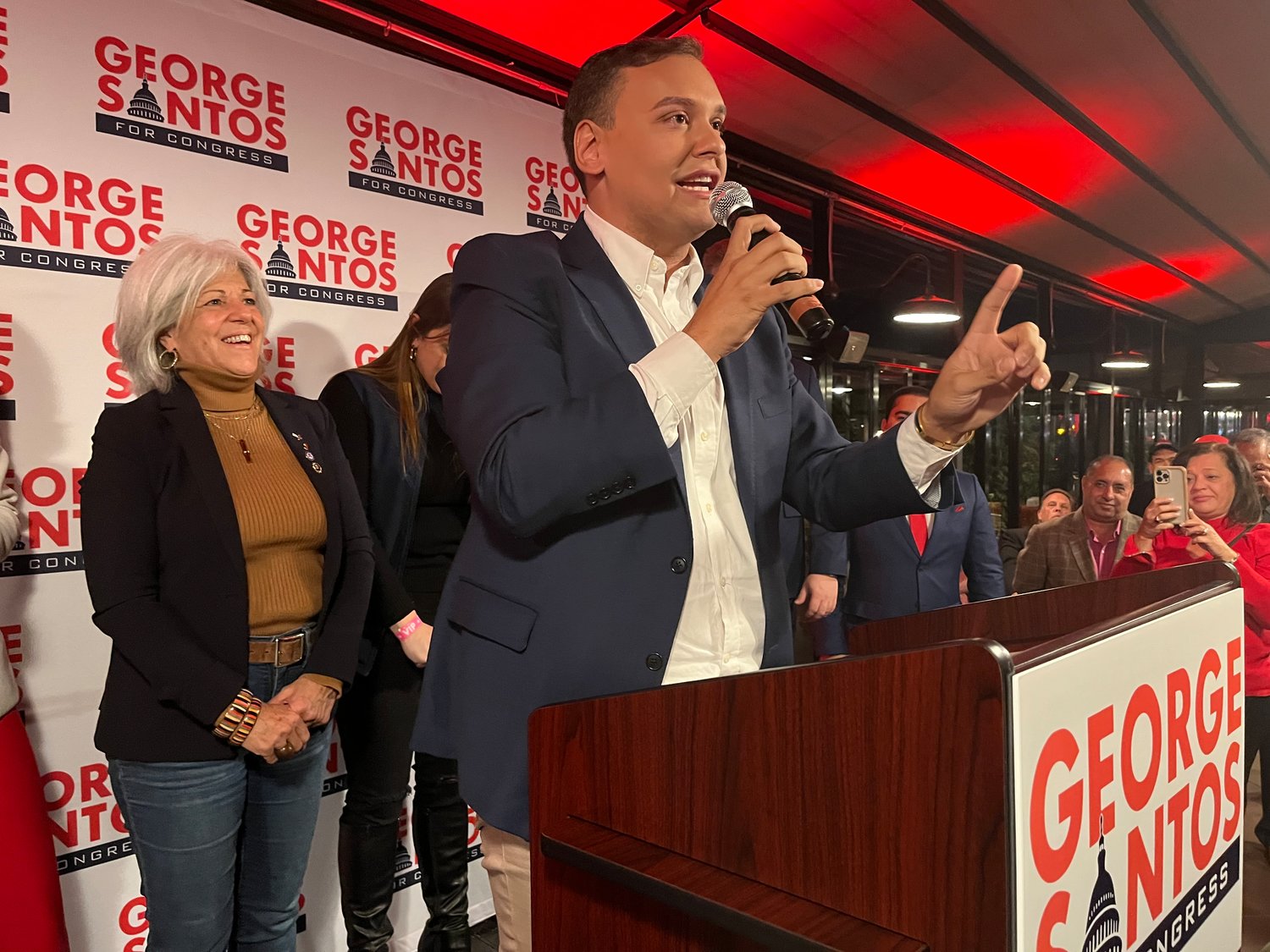 Political newcomer George Santos, a Republican, will represent the North Shore in the House of Representatives.
Will Sheeline/Herald 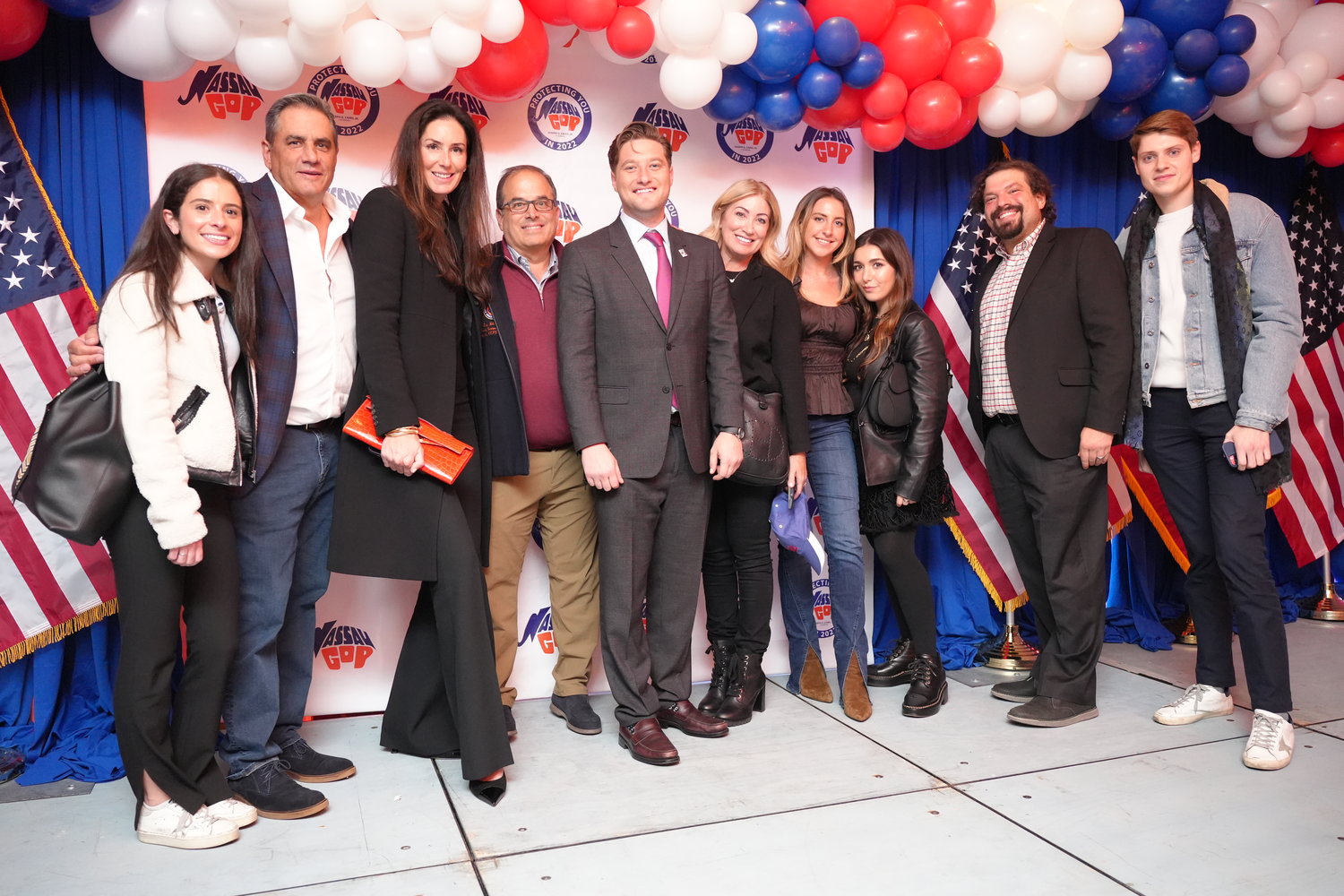 The midterm election did not result in a nationwide “red wave,” as predicted, but on the North Shore, where the majority of races were won by Republicans, there was no mistaking a smaller wave.

The crowd at Il Bacco, in Little Neck, Queens, waited for hours on Tuesday night in anticipation of the vote count for the state’s 3rd Congressional District, which encompasses the North Shore. Supporters of Republican candidate George Santos, a native of Queens, never seemed to doubt that he would emerge victorious over Democrat Robert Zimmerman, of Great Neck. Then, late in the evening, the crowd erupted in applause when a surge of votes from Nassau County put Santos over the top.

Both candidates for the seat, which was vacated by Tom Suozzi when he ran unsuccessfully for governor, are openly gay, a congressional first. Zimmerman, 67, has been a Democratic National Committee member for 22 years and has advocated for LGBTQ rights for decades. Santos, 34, a Wall Street financier and investor and the son of Brazilian immigrants, is a political newcomer who has said he is very supportive of the rights the gay community has secured, but isn’t interested in dwelling on them.

With unofficial results indicating that he had won, Santos appeared before an exultant crowd. “Only in this country can the kid who came from the basement in Jackson Heights . . .” he said more than once, unable to complete his thought. Then he said, “To everybody watching, I want you to know that the American Dream is worth fighting for. It’s worth defending, and that’s why I jumped into this race.”

Luis Vazquez, of Glen Cove, who was in the crowd, said that Santos’s win gave him a good feeling. “He’s a man of his word, he’s a gentleman, and he wants to help the community out, especially the Hispanic community,” Vazquez said, “so I definitely support him for that.”

Another Santos supporter Janet Dennis, of Bellerose, was tearful. “I’m just so happy for our district to finally have someone who will stand up for our police officers, and somebody who will represent our community who is not a career politician,” she said, “and George represents all of that.”

There was crushing disappointment among Zimmerman supporters, who gathered at the Inn in Great Neck. Marsha Silverman, a Glen Cove City Councilwoman who is also openly gay, said she found what Zimmerman stood for to be refreshing. “In this divisive environment, I am extremely proud of Robert for setting an example of how a positive campaign can unify people,” Silverman said. “He is a true advocate for democracy.”

Democratic incumbent Assemblyman Charles Lavine won his 13th District race against political newcomer Ruka Anzai by a wide margin. Lavine said that Zimmerman’s loss made his own triumph bittersweet.
“One side is sadness, because Robert would have been an extraordinary representative,” Lavine said. “But all democracy can do, all American democracy can do, is give us a forum in which we can debate the issues. And we did that. And this time we lost, but next time we won’t.”

Blumencranz, 26, said he saw his win as an opportunity to fight for his generation. “We’re going to give a voice to the younger generation here on Long Island,” he said on election night. “We’re really going to put Long Island first, in the way we legislate.”

“I think there is messaging that the Republican Party is using that is working,” Field said. “People don’t feel safe, and Democrats needed to address safety, which is the first thing I did. We were hearing that from our public. To shy away from it, or deny that that was an issue, was not a good thing.”

Democrats failed to address voters’ main concerns, Field added. “Safety and the economy were the two top issues,” she said. “When the party did address it, it was too late in the game. As someone who ran last year at the top of the ticket, I can say that the Republicans are very good at keying into one key message.”

“What an honor for me, this year especially, when you think of where the state was going,” Martins, 55, said. “We all knew this is the year where we would draw the line in the sand and stand up to make sure we protected our community, keep our families safe, and send a message to Albany that enough is enough.”

Kaplan wrote in an email that it was an honor to have represented her neighbors in the Senate. “Together, we made history, protecting the rights of women, passing landmark legislation protecting New Yorkers from the scourge of gun violence, and fighting back against the rising tide of hate,” she wrote.

James P. Scheuerman, Democratic commissioner of the Nassau County Board of Elections, said that roughly 123,000 county residents voted early, and another 286,000 voted by 6 p.m. on Election Day. “Last midterm we had 505,000 total votes,” Scheuerman said. “We may hit that again with Election Day, early voting and absentees.”