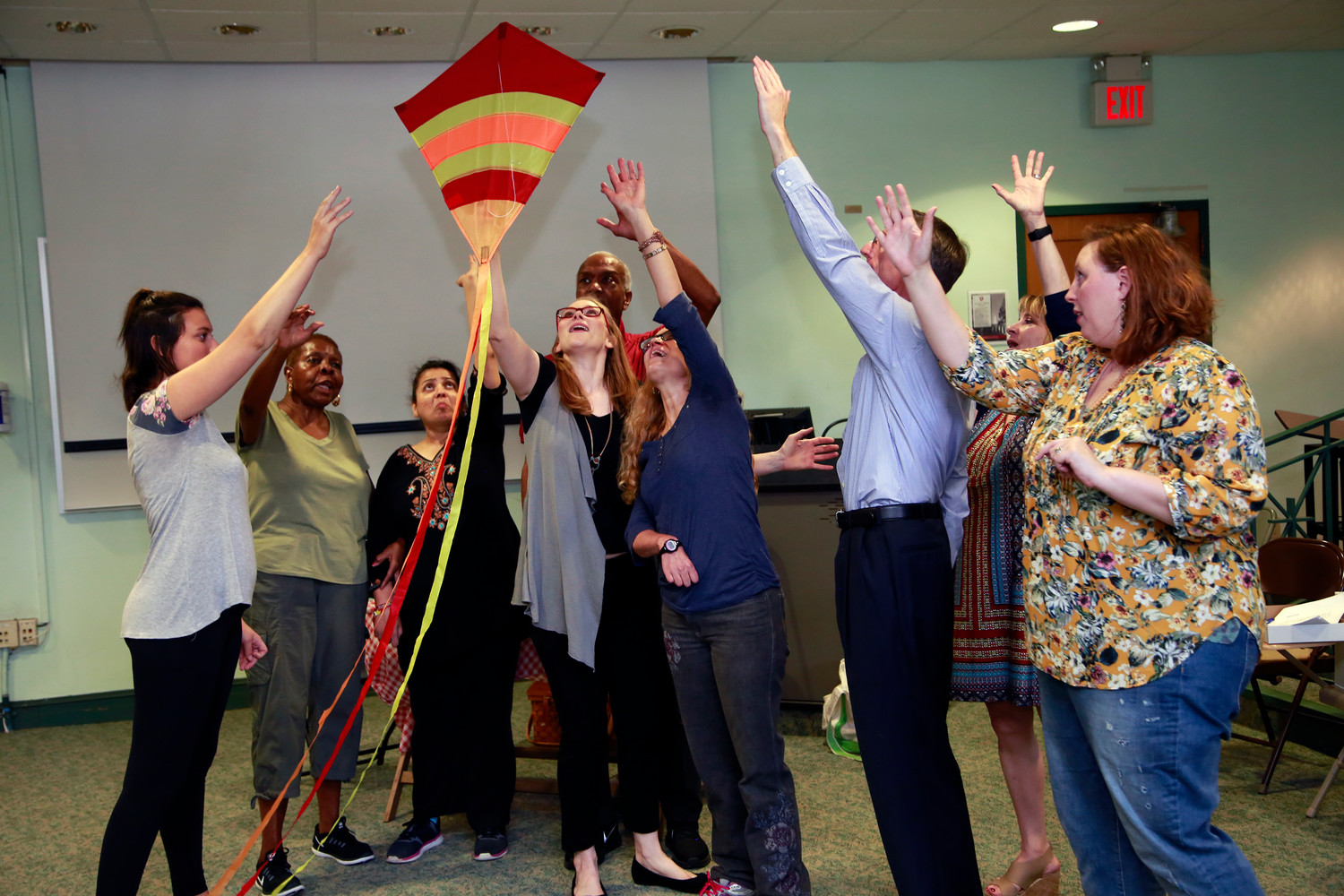 Dr. Laura Wood, center, assists the actors of “Aphasia Park” with a scene during rehearsals. The play explores themes of shared humanity, as well as the struggles and triumphs people with aphasia deal with on a daily basis.
Sue Grieco/Herald
By Alyssa Seidman

As the curtain came to a close on her time as a master’s candidate at Molloy College, Kerryann Scirocco, a speech-language pathology student from Oceanside, was determined to redefine the term “research study” by exploring psychological recovery through performance.
“This interdisciplinary study has allowed me to collaborate with professionals across two clinical disciplines, and experience the effects of drama therapy on individuals diagnosed with aphasia,” Scirocco says.
Aphasia, a neurological communication disorder, is characterized by partial loss of the ability to produce language, often due to a stroke.
Her research was focused on bringing awareness and recovery to individuals with aphasia, according to Dr. Hia Datta, of the Department of Speech Language Pathology. Datta connected the graduate student with Dr. Laura Wood in Molloy’s Department of Clinical Mental Health Counseling. Wood specializes in combining counseling and drama therapy in “therapeutic theater” to help patients in recovery.
“Myself and my colleague Dave Mowers, who’s also a drama therapist, created the co-active therapeutic theater model, which provides steps for creating theater that works with populations to create change,” Wood explains.


The model was initially envisioned to assist clients with eating disorders, Wood says, but Datta believed it would provide an effective means to fund Scirocco’s study. “Not only would this be innovative for the patients we’re working with, but it would also be a vehicle for awareness,” Datta says.
Last November, the team developed an original play using Wood’s model, and identified five aphasia patients to participate as the cast. “Aphasia Park” forces audiences to look beyond prognosis, and see patients as who they truly are: people. The play explores themes of shared humanity, as well as the struggles and triumphs persons with aphasia deal with on a daily basis.
The result of their efforts is the premiere performance of “Aphasia Park” on Thursday, May 31, at 7 p.m. at Molloy’s Hayes Theater, on its Rockville Centre campus. The evening also includes education on aphasia, a fundraising raffle for future projects, and a reception afterwards.
Over the course of 10 weeks, professors, students and patients worked together to find the purpose behind the performance.
“The process is about bringing forth the voices of people who are in recovery, so we used improv and theater games to discover what the theme of the show is going to be,” Wood explains. “Our participants had a really clear message they wanted to share with people, which is that they’re not stupid, they’re still the same person. It’s even a line in the play: ‘I have aphasia, so what?’”
Engaging in intimate weekly rehearsals has had a positive impact on the actors. It’s allowed them to socialize with fellow patients, use their bodies and words to tell a story, and has given them the opportunity to commit themselves to something greater than their affliction.
“Aphasia is a communicative disorder, and here they are communicating through a very powerful medium,” Datta says. “To be collaborative is important. It’s so much better for the patients to work as a team.”
Dr. Susan Alimonti, a professor of speech-language pathology who also worked on the project, was endeared to see the patients performing beyond their parts. “You could tell they’ve formed a bond,” she says. “One of the findings with people in this process is that they build community, so it’s really exciting to watch this group originate it here.”
Dani Bryant, a student intern in the Clinical Mental Health Counseling department, assisted with the production of “Aphasia Park.” “Working on this project has been extremely rewarding,” she says. “It is a true testament to the power of creativity, collaboration and storytelling. I hope many people will be able to attend to celebrate the brave work of our actors and honor their stories.”
Wood remarked on the impassioned efforts of Scirocco and Bryant. “Dani and Kerryann are very gifted graduate students who have put their heart and soul into this,” she says. “And when collaborators do that the participants feel it, and they feel seen and held.”
Working through the lens of drama therapy places greater value on the rehearsal process as opposed to the finished production. “There is something to be learned and understood,” Wood says. “It’s unlike a professional theater production.”
“Even if the production is not how [the participants] imagined, the fact that they committed to rehearsal, and were using words or gestures, or any communicative process, [shows] they’re already benefiting,” Datta says.
Tickets are free, but donations are welcome. For information, email recoverythroughperformance@gmail.com.
—
Report an inappropriate comment

Jimmy's Junk - A collection of memories