Posing, wax-like, as their heroes 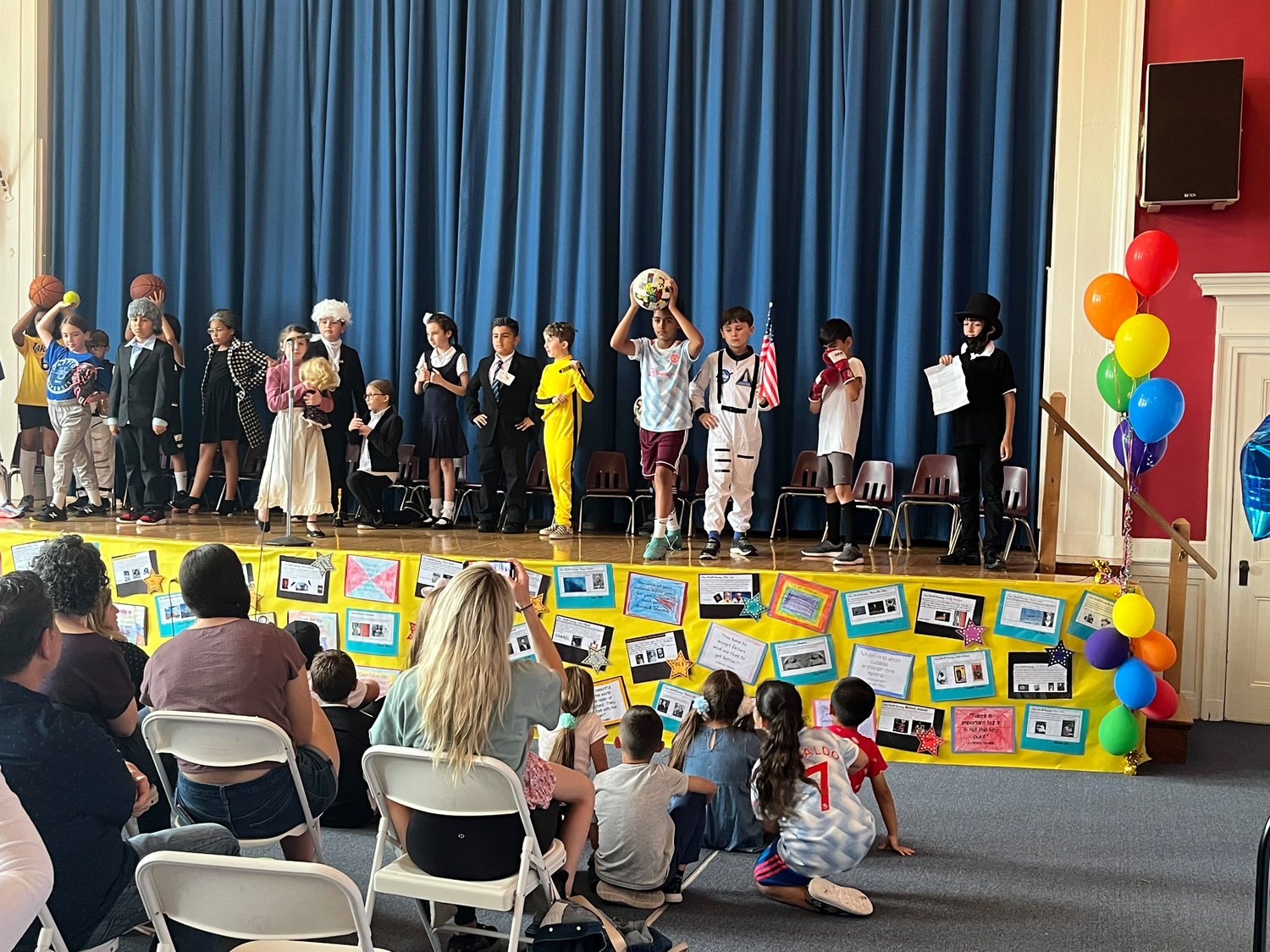 Third-Graders at Glen Head Elementary, looking much more alive than cast in wax, shared what they learned about their heroes.
Will Sheeline/Herald 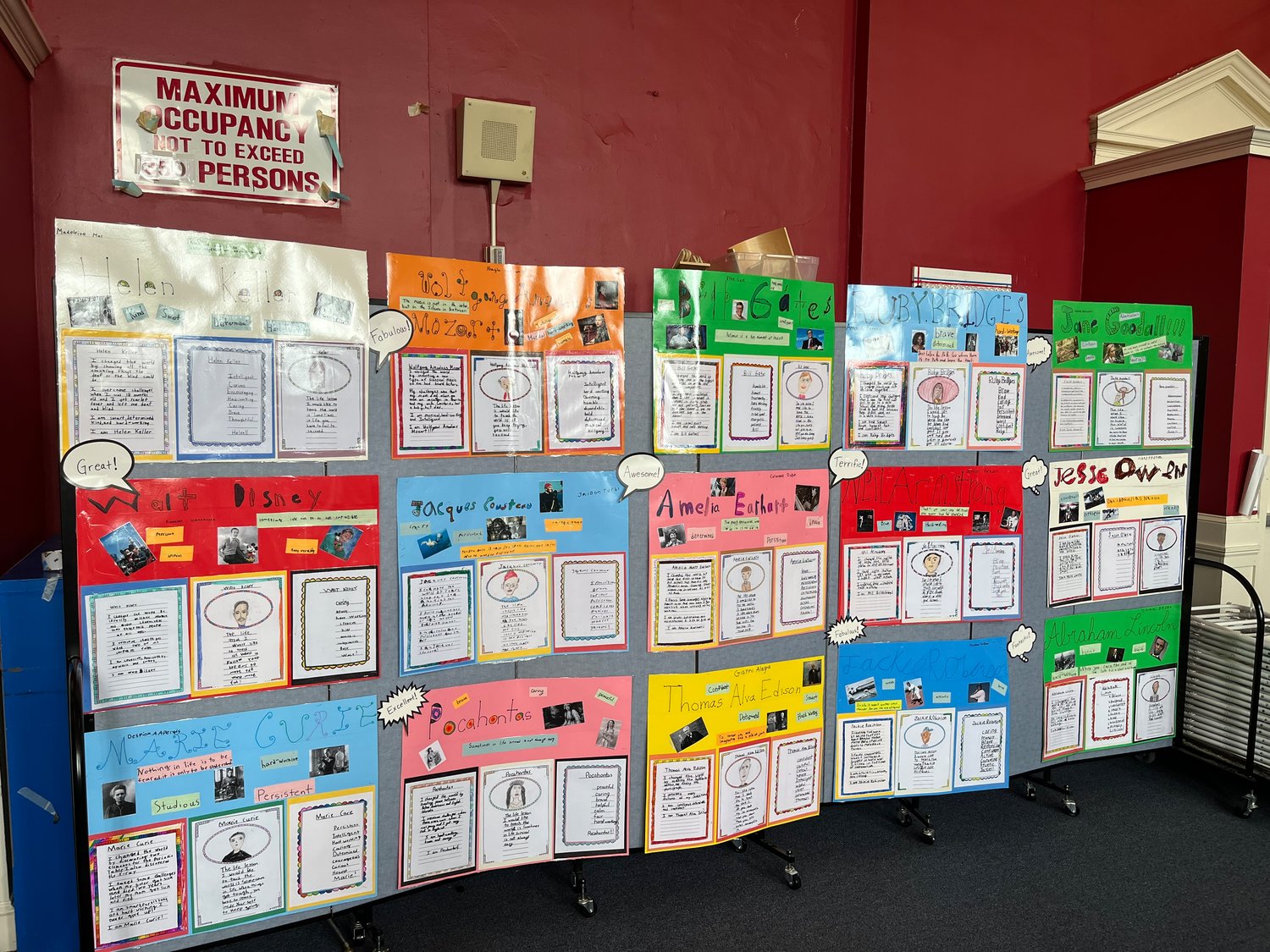 The students’ hard work was on display for their parents to appreciate.
Will Sheeline/Herald 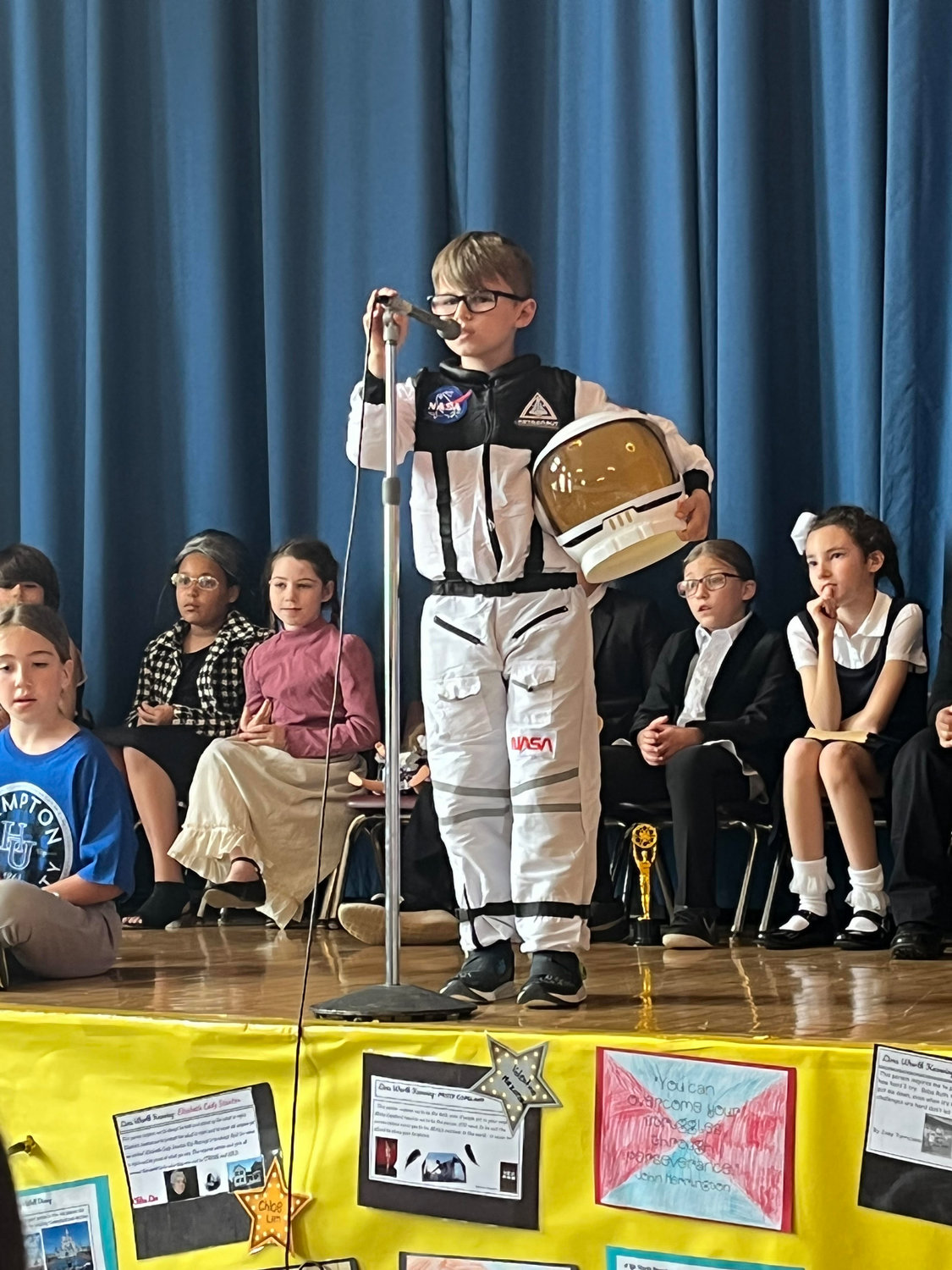 Liam Puglisi portrayed John Herrington, a U.S. naval aviator and astronaut from the Chickasaw Nation, the first Native American to go into space.
Will Sheeline/Herald
Previous Next
By Will Sheeline

Glen Head Elementary School was chock-full of historical figures on June 1, when the school’s third-grade students staged their annual Wax Museum for their classmates and families. Titans of history including Abraham Lincoln, Rosa Parks and George Washington stood side by side on stage in the school’s auditorium with latter-day heroes like Barack Obama, John Herrington and Cristiano Ronaldo.
This was the first time since the beginning of the coronavirus pandemic that the third-graders had the chance to present the show with the entire class together indoors. In 2021 they were forced to hold it outdoors, and in 2020 they weren’t able to present their work at all.
“This was the first year since Covid started that the kids could really come together and perform it as a whole class in front of their parents,” third-grade teacher Meryl Fox said a few days after the show. “The past two years it was very individualized, so it’s nice for the kids to be able to do it as a whole class again.”
Each of the school’s three third-grade classes, taught by Fox and her co-teacher, Helene Stein; Milena Scalzo and Jeanine Bernsby, had their own shows last Wednesday.
Wax museums are a popular project in schools across Long Island. Students learn about famous people, make posters with information about their subjects, and dress up like them as well. Traditionally, the presentations are much like regular wax museums, with students in costume standing stock-still until a visitor walks up to them. With the press of a paper button, the “figurine” comes to life, giving a brief description of his or her accomplishments and answering questions.


Glen Head’s third-graders did it slightly differently, however. Instead of standing by their posters, they gave their presentations on stage, addressing the crowd of family members, teachers and fellow students.
Fox, who is finishing her first year as a third-grade teacher, said she and her colleagues encouraged children to focus not just on the historical figures themselves, but what they could learn from them. “That’s why we came up with the idea of studying lives worth knowing,” she said, “like why are they worth knowing? What can they teach us?”
The students, speaking as their subjects, briefly detailed lessons they had learned from studying them. They then gave roughly 30-second descriptions of who they were, the challenges they had faced and what they had accomplished.
Ronan Nisolo, from Fox and Stein’s class, taught the attendees about his subject, Bruce Lee. He explained how Lee overcame immense challenges to become one of the best-known martial artists in history.
“I was born and raised in San Francisco,” Ronan said, speaking as Lee. “I was born on Dec. 7, 1940. I overcame many obstacles in my life, like poverty, racism and injuries. I am famous … for bringing martial arts to mainstream America.”
Another student Lavetta Jahan, studied the NBA star LeBron James. She said studying James’s life had taught her the importance of perseverance, and charity.
“You can never be afraid to fail,” Lavetta, as James, said. “Playing basketball helped me deal with hard times, since growing up I was very poor — it was just my mom and me. This taught me the importance of giving back to others.”
Report an inappropriate comment