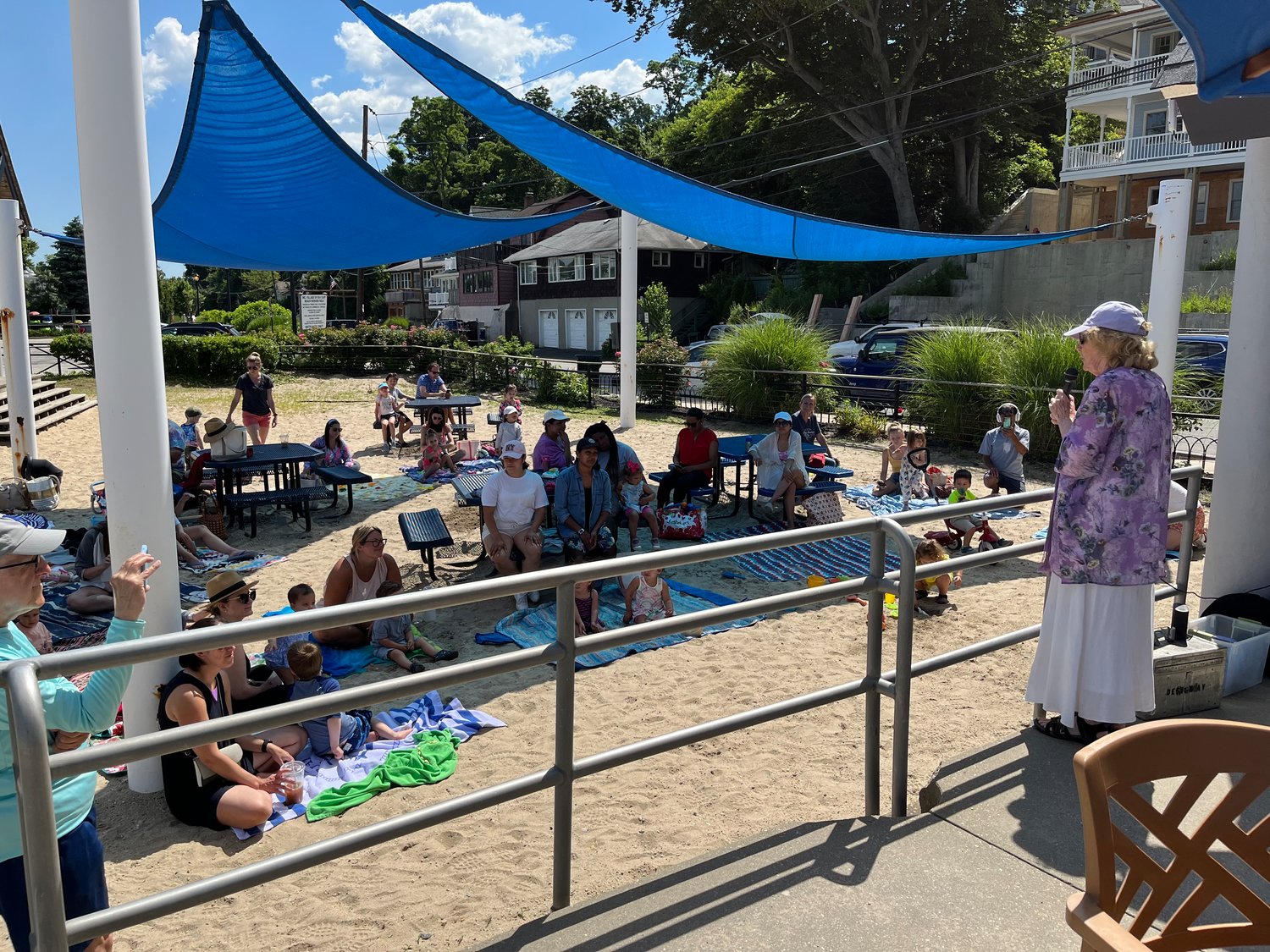 Before beginning the reading, Ann DiPietro greeted the crowd while “Puff the Magic Dragon” played softly in the background.
Will Sheeline/Herald 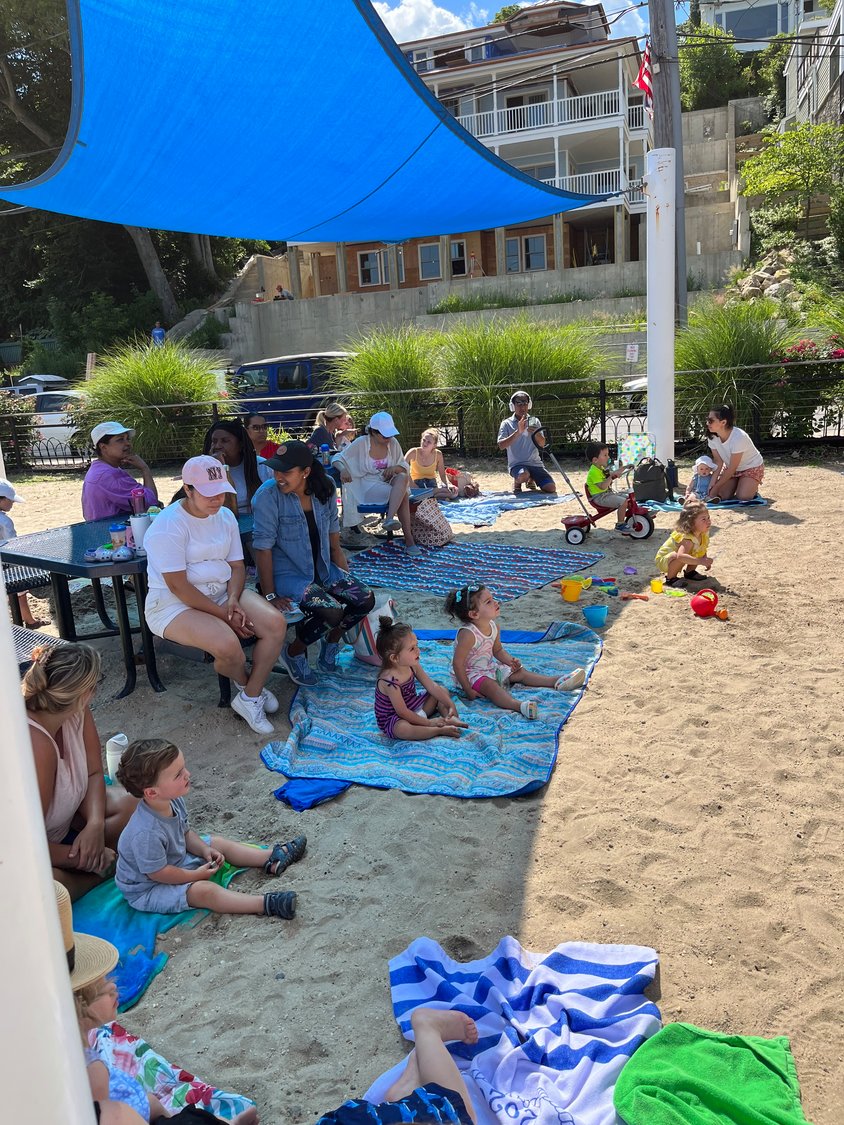 Families began gathering 30 minutes before the show, to enjoy the beauty of the summer morning.
Will Sheeline/Herald
Previous Next

We tend to do stories that the kids already know, but we like to add a Sea Cliff touch to it.”
Ann DiPietro, Children’s program director, Sea Cliff Village Library
By Will Sheeline

Summer is here, and with the weather warming the Sea Cliff Village Library will be continuing its 20 year tradition of holding its children’s story time at the beach. On Wednesday, children’s program director Ann DiPietro once again brought the characters of numerous books to life for young children, their parents and even passersby.
Every week from 10 to 11 a.m. on Wednesday, DiPietro meets the children and their families down at Sea Cliff Beach for a theatrical performance of the stories of various picture books. DiPietro brings costumes and props to help make the story come alive for the many children, which include infants and those who are up to age six.
According to DiPietro, she always kicks off the summer story time by reading the old classic, “Strega Nona” by Tomie dePaola, first published in 1975. The distinctive picture book follows the story of Strega Nona, a friendly witch from Calabria in Southern Italy whose magic pasta pot causes some shenanigans in her village.
“Every week we read some sort of fairy tale, but we try to bring in Hempstead Harbor and the waters into the story,” DiPietro explained. “We tend to do stories that the kids already know, but we like to add a Sea Cliff touch to it.”
The program is now in its 20th year, and has been running since DiPietro became the library’s children’s program director back in 2002. Since then, almost two generations of children have gathered round and listened to the performances every Wednesday morning.


Camille Purcell, the director of the library, emphasized that although the stories are mainly fables and fairy tales, throughout the summer the story time does cover numerous genres.
“Ann really runs the gamut, everything from little biographies to beach or water themed stories,” Purcell said. “It’s a lot of fun, the kids and even their parents really love it.”
The reading is held right next to the Cliffside Café, and families will often sit on nearby benches or bring beach towels to lie down on with their children. Residents without children stopping by the café or there just to enjoy the beach will often stop what they’re doing to listen in as well, making it a truly communal event.
Christine Abbenda, one of the library’s board members, is one such parent who frequently attended with her children, although they have now aged out of the program.
Abbenda stated that when her family moved to Sea Cliff a decade ago her son was five and her daughter was three. She wanted to help them meet other children who would be in their classes in the fall. Abbenda said the reading program was the perfect chance to get to know the community, while also entertaining her children.
“I think that it’s a great program in Sea Cliff, there’s a real sense of tradition to it,” Abbenda said. “I would take my kids even after they got a little older because its such a fun thing to hear the stories and to see Ann make them come to life.”
Even the coronavirus epidemic couldn’t stop story hour from continuing. Although less people were coming, every Wednesday morning in the summer DiPietro could still be seen on the beach making children and parents laugh at the antics of the various fairy tale character.
At the end of the reading, DiPietro also leads the families in a nautical themed sing along. The children and parents then participate with DiPietro in a little parade of sorts back to the library, and get ready to enjoy the new yarn that will be spun next week.
Report an inappropriate comment