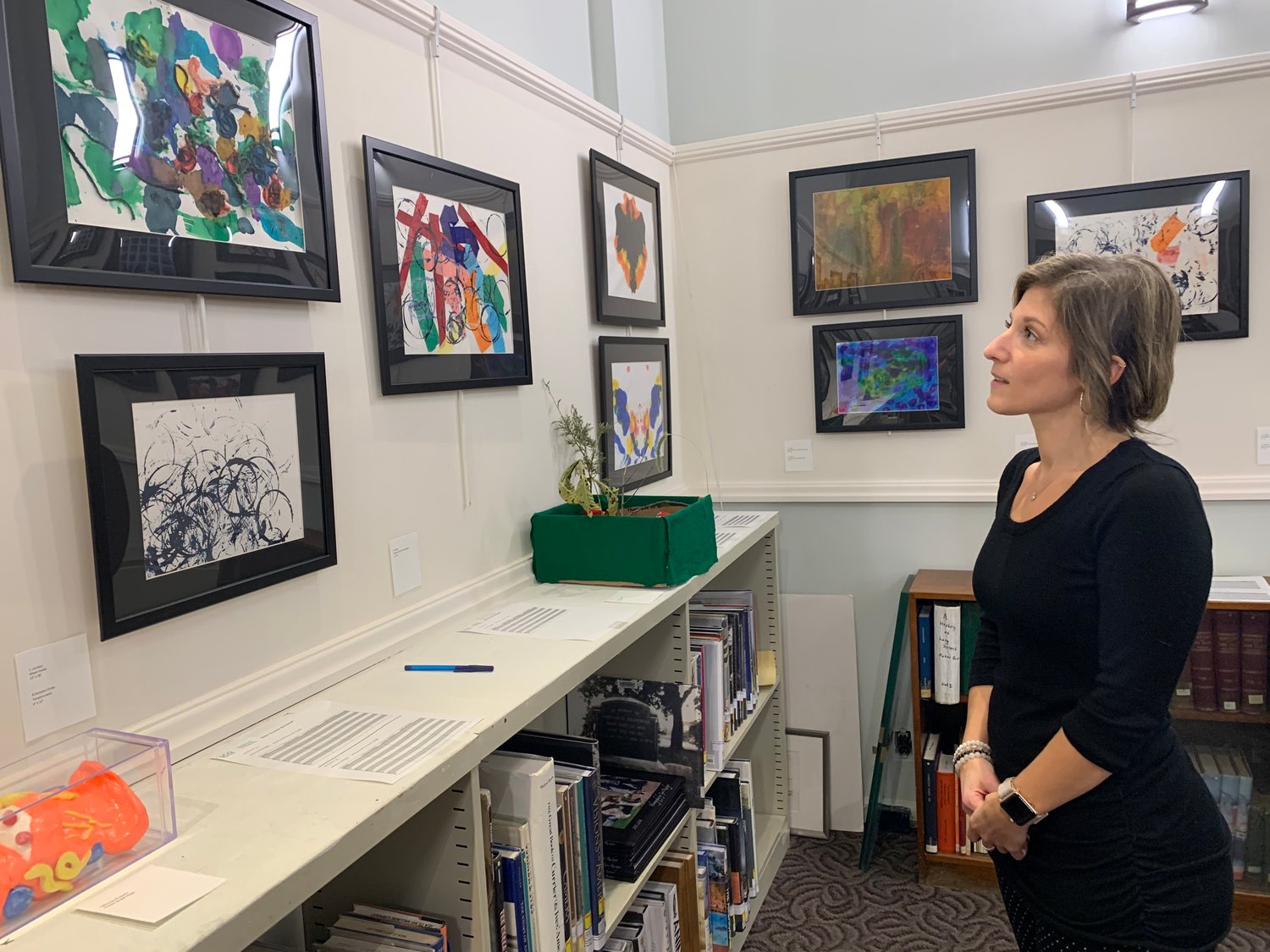 Clinical art therapist Suzanna Shayer is proud to display the artwork made by young people with intellectual disabilities at SCO.
Mike Conn/Herald Gazette
By Mike Conn

St. Christopher-Ottilie Family of Services in Sea Cliff houses 73 young people between eight and 20 years old, all of whom have intellectual disabilities. They are served by a variety of programs to help them develop, and one of the most interactive is art therapy. Residents use mediums such as painting, photography and 3-D sculpting to create unique works of art, some of which are now on display at the Sea Cliff Village Library. The 24 pieces of artwork will be in the library until Jan. 1 and residents can participate in a silent auction to take one home. All proceeds will go toward funding SCO’s programs.

This is the fourth year in which SCO clinical art therapist Suzanna Shayer has exhibited the work of the children with whom she works. She said it not only serves as a fundraising opportunity for the center, but even more so as a way of showing what it does and the capabilities of its residents.

“With this population, because there are challenges, people tend to focus on the disabilities and those challenges,” Shayer said. “When you separate from that, these young people have a ton of talent and abilities.”

Shayer described art as an impactful tool for people who are nonverbal or minimally verbal, a demographic into which roughly 80 percent of SCO’s residents fit. Art is not only a form of self-expression but also helps residents develop social skills through sharing space and materials and working in groups.

“In using art, we have this opportunity to work on things that you can’t [always] work on with these kids,” Shayer said. “We can work on communication skills, we can work on socialization skills. Because art is a non-verbal modality, you don’t need to have verbal skills to express yourself.”

During the SCO art exhibit’s opening night on Nov. 6, members of the community were able to see the work that Shayer and SCO photography teacher Emily Alterman have helped their residents to create.

Heidi Hunt, co-chair of the Sea Cliff Arts Council, said she loves hosting the exhibit every year because it not only showcases the work that is done at SCO, but also gives a different slant on art to a community that is filled with artists. She also said she is happy to see young people with intellectual disabilities create something that comes from within.

“I think this gives them a sense of freedom,” Hunt said. “It’s coming from their soul and who they are, and it’s allowing them to get something different out of them that isn’t necessarily led by somebody else.”

“Expressing oneself creatively helps facilitate healing,” said Jonathan McLean, vice president of youth justice and representative services at SCO. “I think for anybody, not just our kids, it’s an opportunity to connect with a part of ourselves that I don’t think [we can] in everyday society.”

Since it was constructed in 1897, SCO’s building at 1010 Downing Ave. has served a variety of purposes. It began as a home for convalescent babies before turning into a children’s shelter in 1948. In 1973, it began to transition from shelter care to care for children with intellectual disabilities. The campus has grown over the past few decades to accommodate more and more residents and programs, and in 2005, it became SCO.

Sea Cliff Mayor Edward Lieberman said the exhibit is an extension of the village’s welcoming nature, as it has embraced the important yet sensitive work that has been done at 101 Downing Ave. for over a century.

“This is just a continuation of that premise which we in Sea Cliff really take to heart as part of our heritage,” Lieberman said, “and this exhibit is just another example of people within their home that expresses themselves in a beautiful way.”

Shayer said she hopes the artwork gives the Sea Cliff community a little insight into the life of the young people who live at SCO. Its residents are a part of the community, she said, and she is proud to display some of the wonderful things they can create.

Anybody who is interested in bidding on a piece of artwork can do so at the Sea Cliff Village Library, 281 Sea Cliff Ave., Sea Cliff. The person who places the highest bid by New Year’s Day will be notified by SCO when they can take their purchase home.