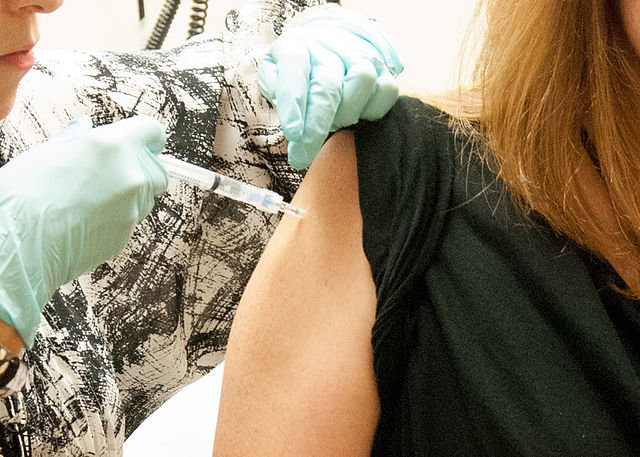 Laura Russo, of Sea Cliff, allegedly administered a dose of the Johnson & Johnson vaccine to a teen unauthorized in her home on Dec. 31.
Courtesy Wikimedia Commons
By Annemarie Durkin

A Sea Cliff woman was arrested on Dec. 31, 2021, and charged with giving a 17-year-old a Covid-19 vaccination last Friday without permission from his parents, according to police. Laura Parker Russo, 54, is accused of injecting the teen with the shot at her residence in the village.

According to officials, Russo’s son had a friend at the house, and the friend asked for the vaccine, claiming his mother didn’t want to have him immunized against the coronavirus. The teenager told his mother when he got home that he had gotten the vaccine, and she notified the police.

Russo, a biology teacher in the Herricks Public Schools in New Hyde Park, was charged with unauthorized practice of a profession, after police determined that she was not a medical professional. She was freed with an appearance ticket, and is due in 1st District Court in Hempstead on Jan. 21. The Nassau County Police Department did not immediately respond to a request for comment.

NBC News reported on Monday that Russo administered the Johnson & Johnson vaccine, which is only recommended for adults. In a video also released Monday, Russo appears to stick a needle into the boy’s arm. Police said the vaccine was authentic, but it was unclear how Russo, who has no medical qualifications, obtained it.

According to a statement attributed to Herricks Superintendent Fino Celano by the district’s public relations firm, Russo has been “removed from the classroom and reassigned.” The statement added, “The matter is under investigation.”

A bill currently pending in the State Legislature would permit any child who is at least 14 years old to have immunizations that are recommended or required by law administered by health care practitioners, with or without parental consent.

This is not the first reported incident of an unauthorized Covid-19 vaccination. Across the country, several minors have reportedly been vaccinated without parental consent.

Last month, Maribel Duarte, of Los Angeles, claimed that her 13-year-old son received the vaccine shot in exchange for pizza without her authorization. Duarte had been vaccinated herself, but said she didn’t want her son to get the shot because he is asthmatic and suffers from allergies, putting him at greater risk for rare but potentially serious side effects.

In the United States, about 53.4 percent of those ages 12 to 17 are fully vaccinated against Covid-19. In New York state, that number is 10 percentage points higher.

The United States has reported more than 825,000 deaths since the start of the pandemic. According to the most recent figures from the Centers for Disease Control and Prevention, 790 of those deaths have been of children younger than 18. As of press time, there were more than 54 million active Covid-19 infections in the country.