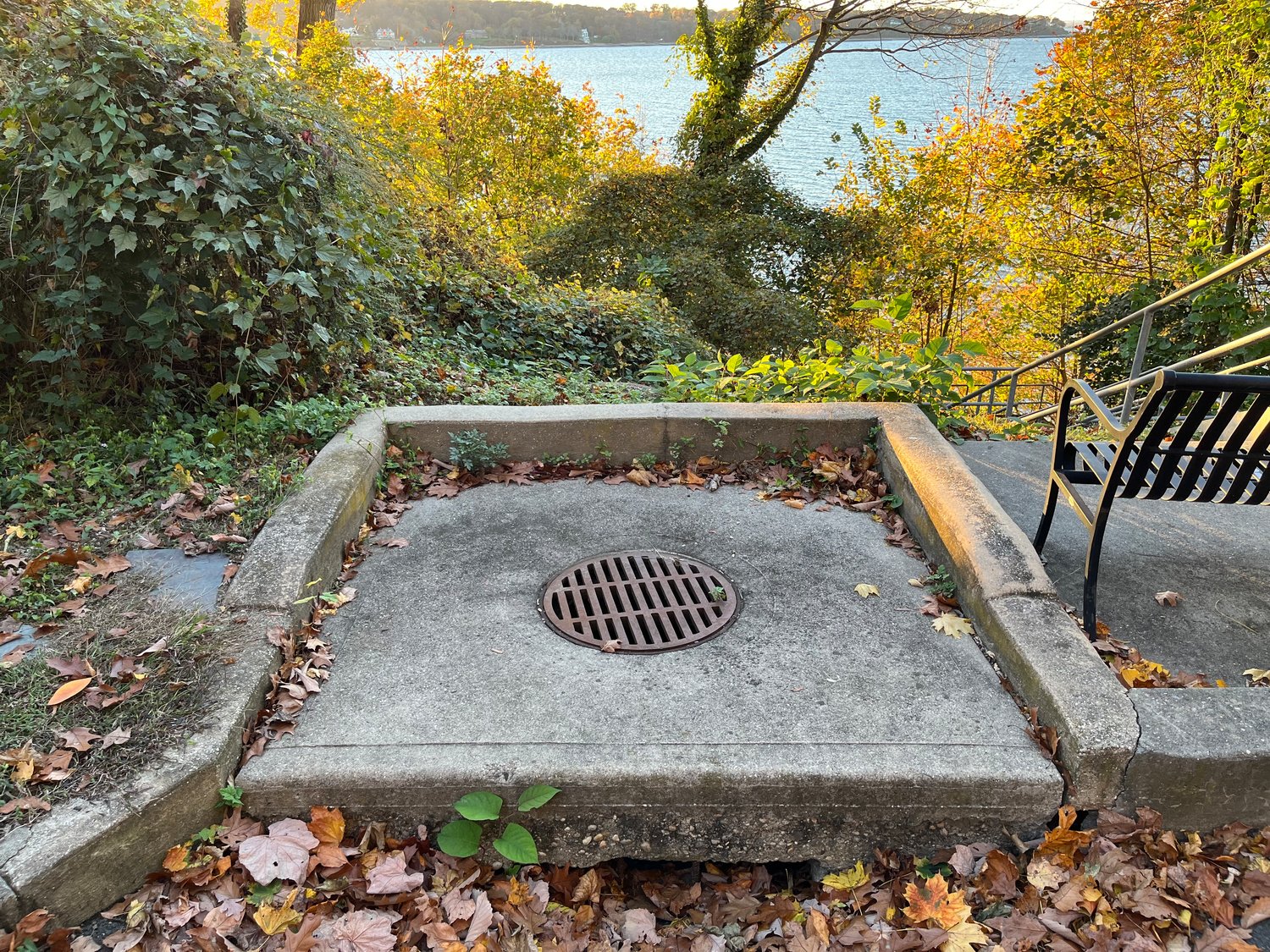 The storm drain starts at the top of the Tilley Steps, and much of the village’s stormwater runs through the 100-year-old piping.
Will Sheeline/Herald 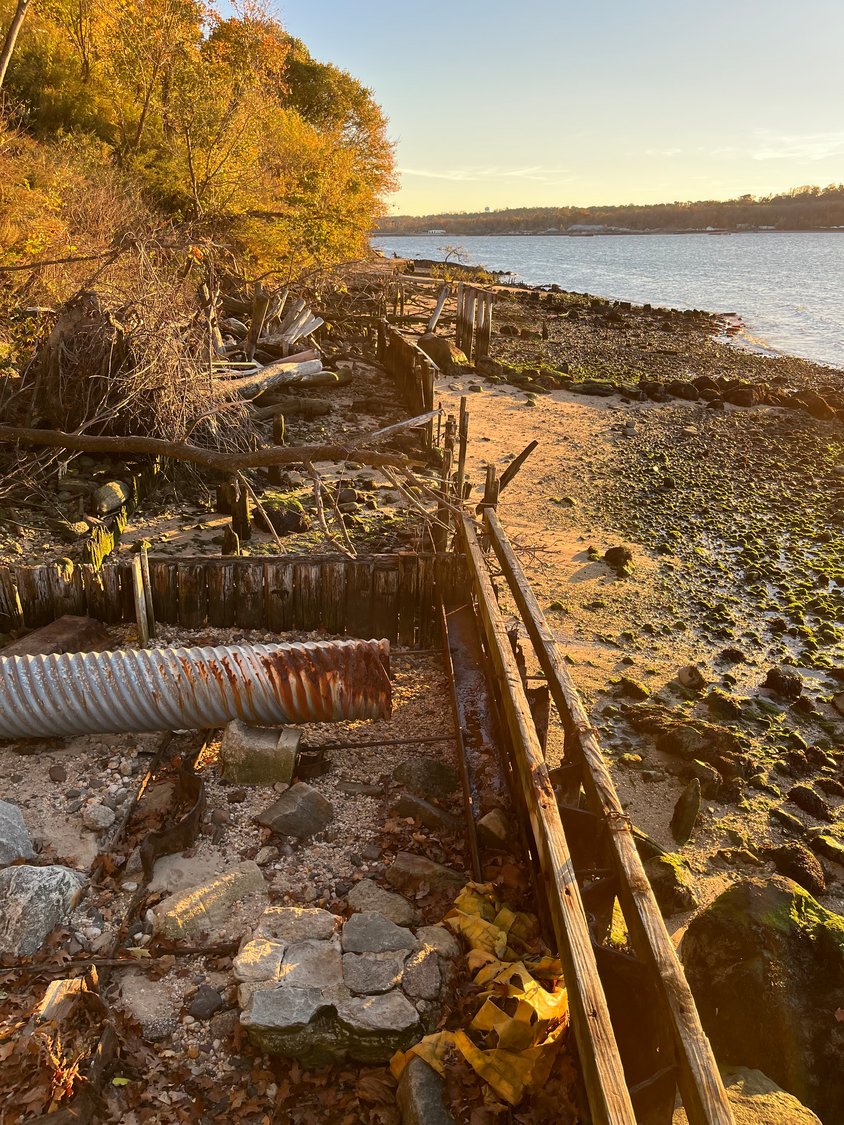 In addition to replacing parts of the drain itself, the village will also rebuild the storm wall beyond it, protecting the beach from future erosion.
Will Sheeline/Herald 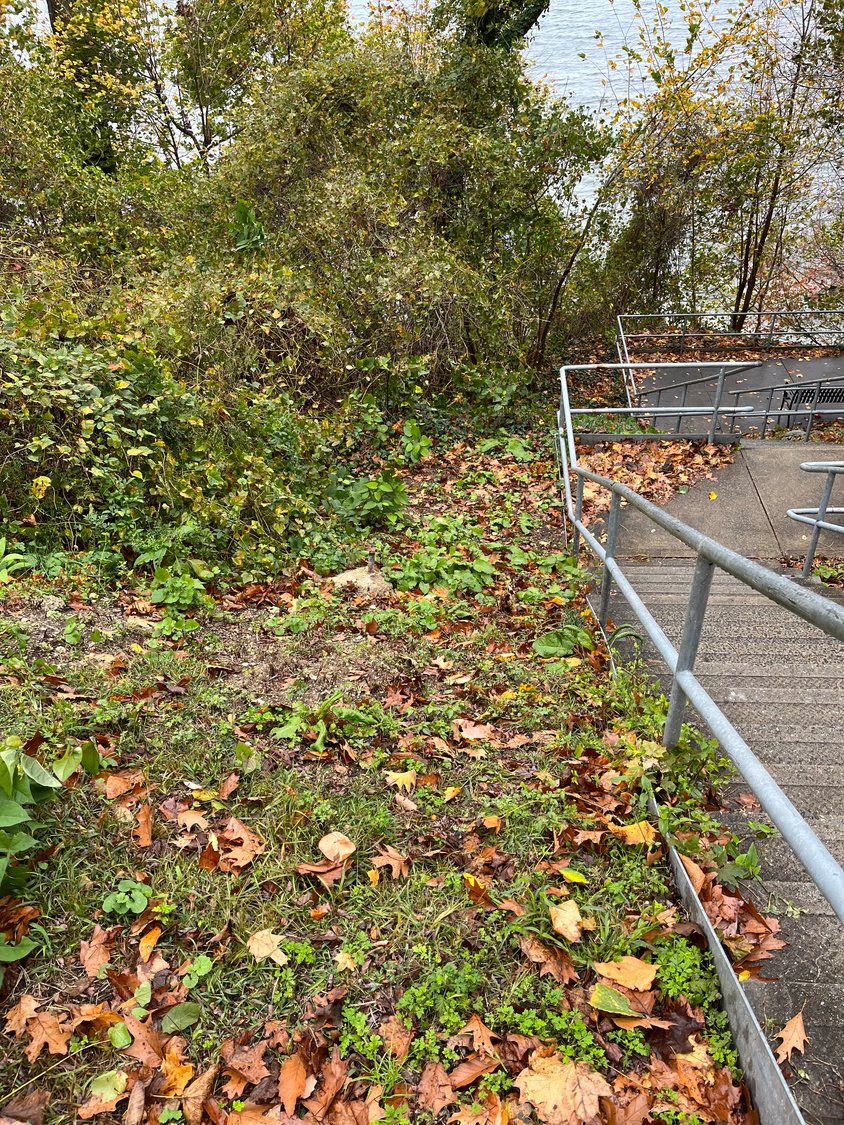 The drain pipe runs alongside Sea Cliff’s iconic Tilley Steps.
Will Sheeline/Herald
Previous Next
By Will Sheeline

Sea Cliff’s Tilley Steps Historical Public Walkway is one of the many beautiful and scenic paths through the historic village. But what even many residents don’t know is that running alongside the steps is one of the most important aspects of Sea Cliff’s infrastructure — its roughly century-old storm-water discharge pipe.

The discharge pipe extends from the top of Tilley Steps to a discharge point around 24-feet beyond the boardwalk, where an old seawall used to stand. For roughly 100 years the pipe faithfully carried excess and runoff rainwater from the village back to the sea, but over the years rust and the ravages of time began to take their toll on the structure.

“Just as a result of the bulk heading being 100 years old, the old steel is rusted and really started to just fall apart,” Bruce Kennedy, the village administrator explained. “The water’s still getting to the waterfront, but the pipe’s just not operating the way it’s supposed to anymore.”

This situation was discovered around a year and a half ago, when the Sea Cliff Village Board of Trustees received a state grant to do an analysis of all the storm-water discharge locations in Sea Cliff. Although the Tilley Steps pipe was still functioning, the board acted quickly to begin looking into solutions to the problem, putting out a referral for proposal to hire a contracting company to fix the solution.

After looking over a dozen bids, the village hired Terry Contracting and Materials, an excavating contractor based in Riverhead. After discussing the situation with them, and Sea Cliff’s building department and village engineer, a plan was agreed upon.

Work is expected to begin in four weeks, and it is estimated that the project will take around five additional weeks before it’s completed.

According to Sea Cliff’s mayor, Elena Villafane, the plan is to not just replace the failing portions of the storm pipe but also to repair the attached bulkhead, a fitting which allows the pipe to drain out. They will also be installing a modern backflow device to ensure proper operation during storms, flooding and other major weather events.

The village has also committed to rebuilding the old sea wall that the pipe discharges to, in effect killing two birds with one stone by fixing the piping and reducing water erosion.

“This project has been on the village’s radar for a while, and it achieves two purposes,” Villafane explained. “It preserves our waterfront and continues the village’s commitment to environmentally sound storm-water discharge.”

The project will cost roughly $300,000, Sea Cliff’s residents will not be paying for it. It’s being funded by the American Rescue Plan Act, President Biden’s Covid-19 stimulus package.

In addition to providing money to Americans, small businesses and the healthcare system, the plan also provided grants to communities for eligible water, wastewater and storm-water infrastructure. Sea Cliff was one such municipality which was able to take advantage of the ARPA funds, making this project environmentally friendly, fiscally responsible and a benefit to the entire village.

“We decided the best use of the ARPA money is to maintain the village in this way,” Dina Epstein, the deputy mayor, explained. “It would be fun to do some showier project, but this is something that’s just necessary to maintaining our infrastructure.”