Teen Idol contestants sing their way to the top 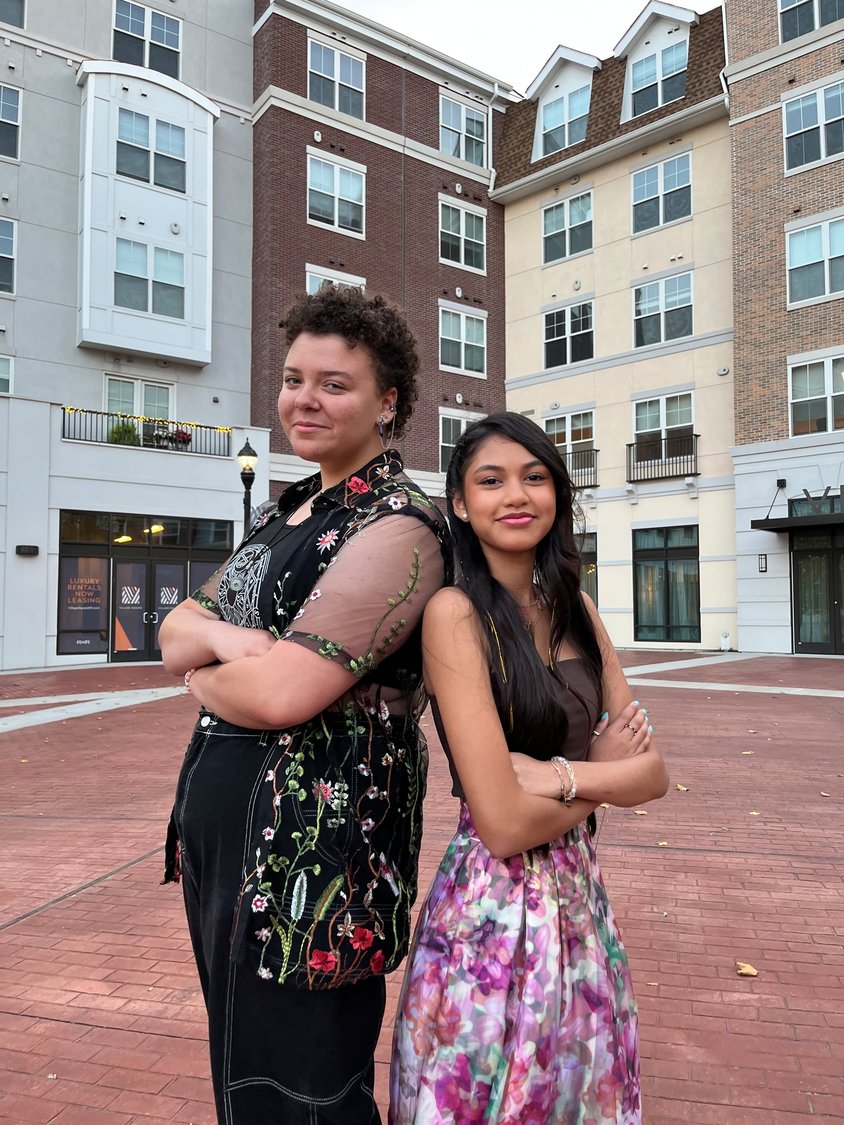 Either Shye Roberts, left, or Lexi Briones will be the winner of the Downtown Sounds Teen Idol.
Courtesy Business Improvement District 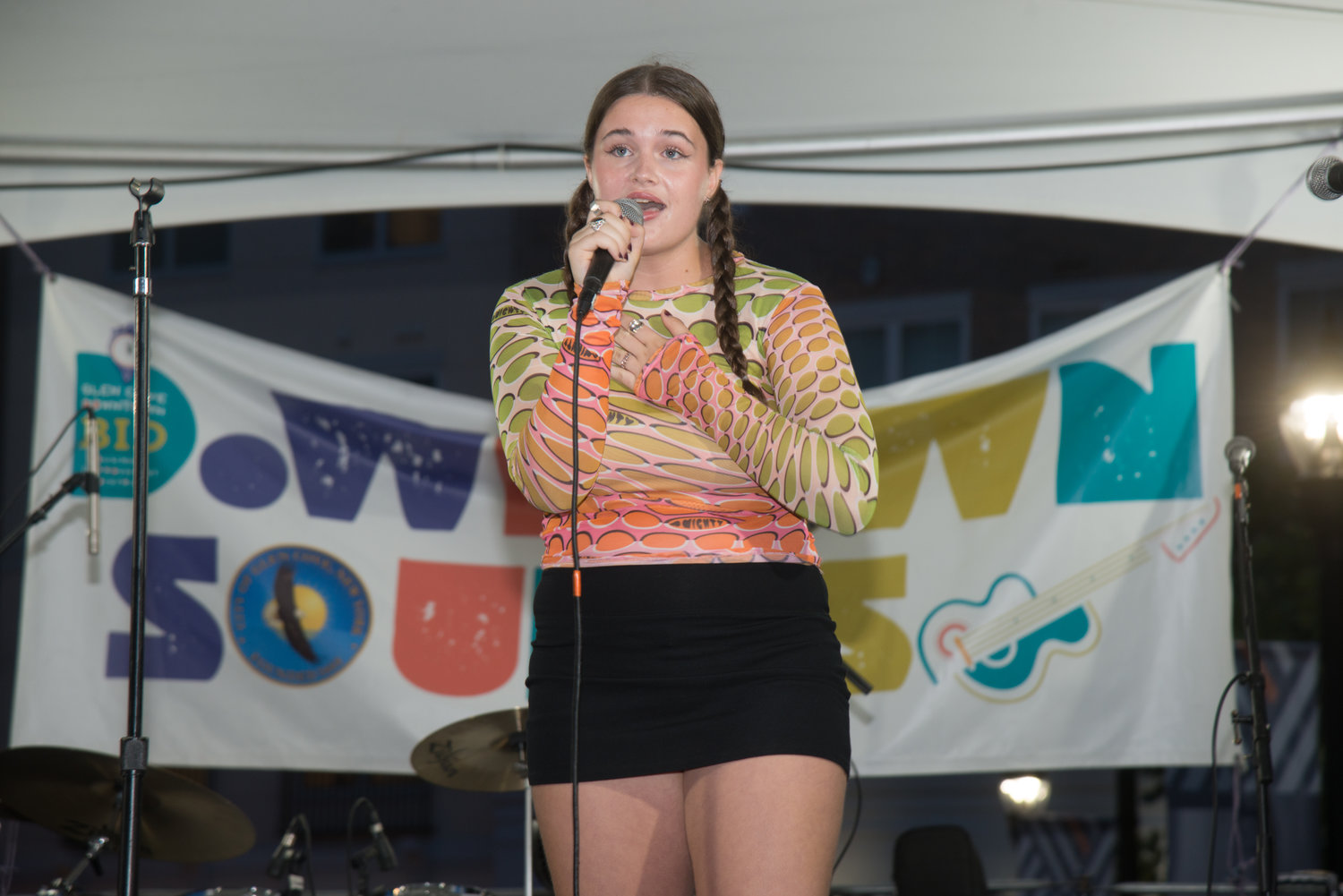 Charlotte Marchioli, of Sea Cliff, was proud to finish in the top three.
Courtesy Business Improvement District
Previous Next
By Kepherd Daniel

Then there were two. A pair of Glen Cove teens have reached the finals of the Downtown Sounds Teen Idol contest, which concluded on Friday.
In recent weeks, local teens have serenaded the Glen Cove community with their vocal skills as part of a contest in recognition of the 25th anniversary of the Downtown Sounds summer concert series, which took place weekly on Friday nights in Glen Cove’s Village Square.
The contest, which began with five contestants, came down to two finalists on Friday, Shye Roberts, 15, and Lexi Briones, 13.
Patricia Holman, executive director of the Glen Cove Downtown Business Improvement District, decided to create a contest to support the silver anniversary of the concert series. When she started the contest, the intention was twofold — to offer something for teens and engage the audience.
“The contest not only gave our talented teens a platform to perform but the entire community is invested and can’t wait to see what happens next,” Holman said.


Roberts is surprised by the performances that got her to the final two. “I did not expect it,” she said “I’m pretty glad. It’s been an overall great experience.”
Briones was happy to have the chance to perform. “I know I worked towards it, but I'm so grateful that I’ve had the opportunity to make it this far,” Briones said before his performance on Friday. “Everyone has been so supportive and wonderful and I’m very thankful,”
Briones and Roberts have been singing for a long time and the Downtown Sounds Teen Idol gave them an opportunity showcase their talents.
“I haven't had much experience singing professionally but I've been singing since I was a little girl in my living room performing for my mom and my family,” Briones said.
“Since I could talk, I’ve been singing, which was about two years old,” Roberts added.
The winner will receive $750 and a two-hour session at Tiki Recording Studios. The official contest judges are Eddie Profet, a professional musician and a member of The Doobie Others; Lou-Ann Thompson, a board member of the Glen Cove Downtown Business Improvement District, who is a singer/songwriter and musician; and Fred Guarino, owner of Tiki Recording Studios in Glen Cove and chair of the Downtown Sounds Committee, and vice president of the Glen Cove Downtown BID.
Charlotte Marchioli, 16, of Sea Cliff, performed on July 15 and was thrilled to have reached the final three.
“I am so beyond grateful for the opportunity to participate in Teen Idol and make it to the top three,” Marchioli said. “It’s not every day you get the chance to play in front of hundreds of people, and that aspect of the competition in particular has fueled a ton of growth for me.”
She was happy to meet other teenagers, some from other areas, who possessed the same passion for singing.
“Everyone was just so supportive and excited for each other, and I loved watching everyone get up there and give it their all every week,” Marchioli said. “I mean, even when nerves were through the roof and competition was fierce, Shye, Lexi and I were hyping each other up and joking around backstage. I think there’s something so special about that. Teen Idol has truly just been such an amazing experience and I’ve grown so much as an artist and as a person.”
Since the start of the contest, the contestants took the stage during intermission of the Downtown Sounds concerts to perform one song. Contestants had to perform songs matching the genre of that night’s concert. On Friday, the contestants sang 1970s pop/disco during intermission for the Dancing Dream, ABBA Tribute concert. Roberts, a big fan of pop music and occasionally rhythm and blues, fit the theme of the night singing “The Winner Takes It All” by ABBA, while Briones sang “On the Radio” by Donna Summer.
With the Teen Idol competition over, both girls see a future in music.
“I’d use the money to buy new equipment so I could start recording songs on my own because I like songs, but I haven't had the time to put them into action yet,” said Roberts. “I hope to be some kind of entertainer for people all over the world or that state but if not, at least do music in teaching.”
Briones said the experience and growth throughout the Teen Idol competition meant a lot to her and like Roberts, would like to use the potential prize money towards her passion. “I might save the prize money but also maybe get a microphone or music equipment so I could sing more,” she said
Report an inappropriate comment