Area schools are in compliance with Holocaust education law 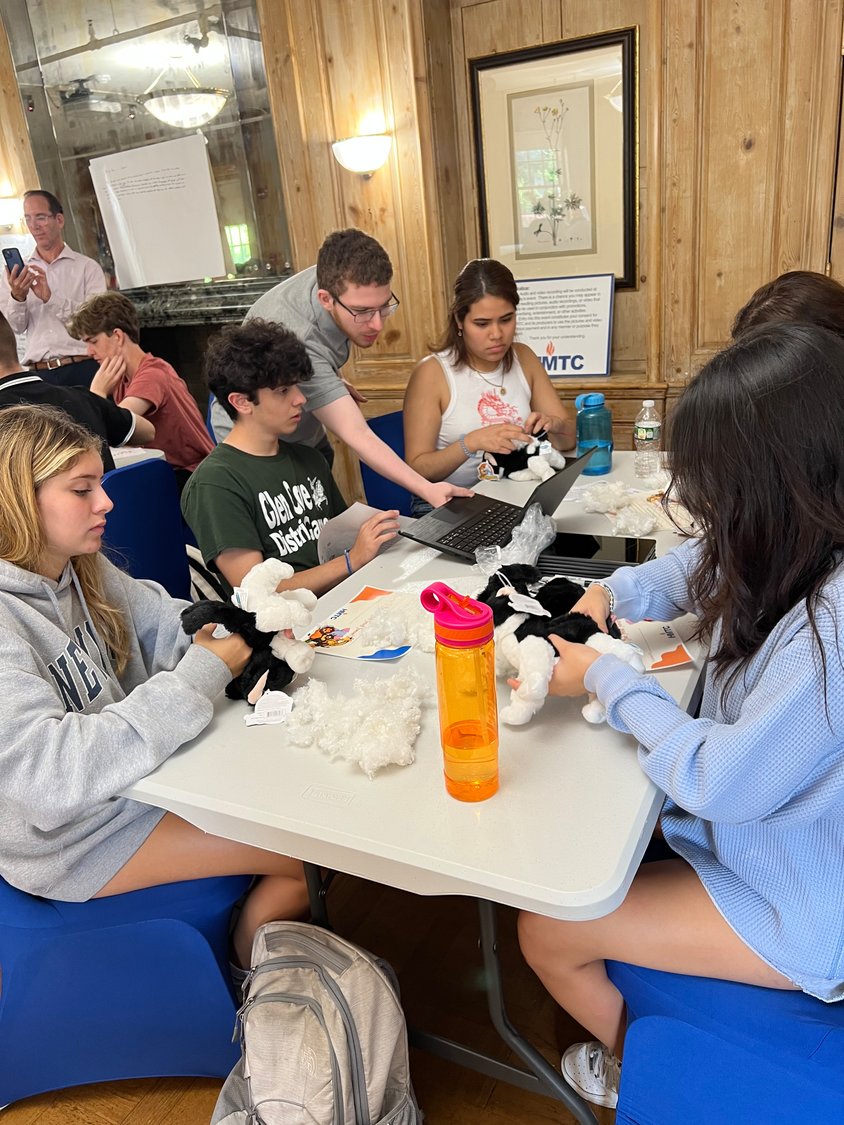 The Glen Cove City School District has a partnership with the Holocaust Memorial and Tolerance Center of Nassau County, which includes visits by high school students to learn about the Holocaust.
COURTESY GLEN COVE CITY SCHOOL DISTRICT

The Holocaust should be used as an example to teach people’s capacity to hate not just Jews, but all minorities and cultures.”
Irwin Huberman, Rabbi, Congregation Tifereth Israel
By Laura Lane

There is a renewed emphasis on Holocaust education in local schools, thanks to a new state law signed in August by Gov. Kathy Hochul, requiring public school superintendents to attest in a survey that their schools are making the Holocaust part of classroom instruction.

The survey asks whether elementary, middle and high schools are providing instruction related to the Holocaust, how they are doing so and what type of training educators have received in the subject. The answers were submitted by Nov. 10.

It appears that the law was particularly timely.

The nonprofit Conference on Jewish Material Claims Against Germany released the 2020 U.S. Millennial Holocaust Knowledge and Awareness Survey in September. The 50-state survey of millennials and members of Generation Z revealed a lack of basic Holocaust knowledge, with New York young people among the lowest scorers.

“As the number of Holocaust survivors dwindles, Holocaust education becomes more challenging,” AJC Regional Director Eric Post said. “Expanding Holocaust education is the biggest challenge this generation of Jews will have in the future, and increasing education levels in New York state schools is imperative.”

Kenneth Graham, superintendent of the Locust Valley School District, said the Holocaust is taught in several secondary social studies and English Language Arts classes. At the elementary level, there is a mix of direct instruction on the topic with lessons on a variety of topics, Graham said, including unity, kindness, inclusion, conflict resolution and relationships.

“The instruction includes experiences such as classroom lessons, fiction and non-fiction reading, assemblies, and field trips,” he said. “Recent experiences have included our middle school and high school students participating in assemblies on tolerance presented by the Holocaust Memorial and Tolerance Center.”

In the Oyster Bay-East Norwich School District, lessons on the Holocaust are part of the social studies curriculum beginning in fourth grade. Alba Gallegos, the district’s executive director for curriculum and instruction, said that students learn about the Holocaust either as part of a historical fiction unit or as an example of violations of human rights and their effects on global conflict. Before the coronavirus pandemic began, a Holocaust survivor came to the high school to share their story with students.

But Andrea Bolender, board chairwoman of the Holocaust Memorial and Tolerance Center of Nassau County, in Glen Cove, said that many schools are falling short of what should be required. State Sen. Anna Kaplan and Assemblywoman Nily Rozic proposed the original bill for the education survey in the center’s garden in April 2020.

“With antisemitism on the rise, and Holocaust misinformation exploding around the world,” Kaplan said in August, when Hochul signed the bill into law, “it’s never been more important that we learn the lessons of the Holocaust, and ensure our next generation knows about our history, no matter how dark or difficult the conversation may be.”

Bolender agreed, adding that although many New York schools have Holocaust curriculums, many do not. “And we want to make sure there is some sort of minimum standards that are met,” she said.

Susan Poulos, the social studies coordinator in the Glen Cove City School District, said that high school students learn about the Holocaust, while elementary students focus on values emphasizing civic readiness. When they reach fifth grade, they take an age-appropriate tour of the Holocaust Museum as their introduction to its history.

“Glen Cove schools has a long history of implementing Holocaust education into our curriculum, because we’re very lucky to have the Holocaust Memorial and Tolerance Center in our neighborhood,” Poulos said.

Students also listen to testimonials from Holocaust survivors as part of a virtual reality experience, which allows them to interact. “It’s so important to ask questions,” Poulos said. “The technology that they’ve used is impressive.”

Seniors participate in civic engagement projects, and focus on issues they are passionate about, she added.

Rabbi Irwin Huberman, of Congregation Tifereth Israel, in Glen Cove, said he believes that learning about the Holocaust has a broader significance. “The Holocaust should be used as an example to teach people’s capacity to hate not just Jews, but all minorities and cultures,” Huberman said. “They all need to be protected from such programs of hatred. We make assumptions that it’s mentioned in history class, but different teachers have different priorities. It’s important for students to understand hatred.”

Huberman meets with young people regularly while doing interfaith work, and said he continues to be surprised that many are not aware of the Holocaust. He blames their ignorance on “coddling,” to protect them from the ugliness of hatred. “We can only use positivity if we are to reject negativity,” he said.

Holocaust education is already a requirement for all students in the North Shore School District. The district has invited a number of survivors and educators to speak over the years, and has a partnership with the Holocaust Memorial and Tolerance Center.

Superintendent Chris Zublionis said he believes the state will find that his district is already fulfilling most of the requirements of the new law.

Dave Ludmar, president of the district’s Board of Education, said he supports the law. “The study of our history is vitally important for our students’ education, both to understand what’s happened before us and to help guide their path going forward,” Ludmar said, “and the atrocities of the Holocaust are things that never should be forgotten.”

Bolender, the daughter of a Holocaust survivor, said that the State Education Department should enforce a minimum standard of Holocaust education for every school, public and private. With education more digitized and conspiracy theories rife on the internet, she added, it is even more important today to begin that education at an early age. While it is difficult to set an age at which teaching about the Holocaust should begin, there are age-appropriate methods for teaching younger students.

“We don’t want to traumatize 6-year-old kids, but we do want to start teaching them,” Bolender said. “We have educators who were raised with survivors who work with K-through-5 kids on what it means to be kind. Then you can start comparing what it means to be unkind. It makes it easier in fourth or fifth grade to say these unkind actions happened to the Armenians, happened to the Jews, and you can start introducing the idea that words relate to hatred.”

Additional reporting by Kepherd Daniel, Will Sheeline and Roksana Amid.