He had been on FDNY only nine months 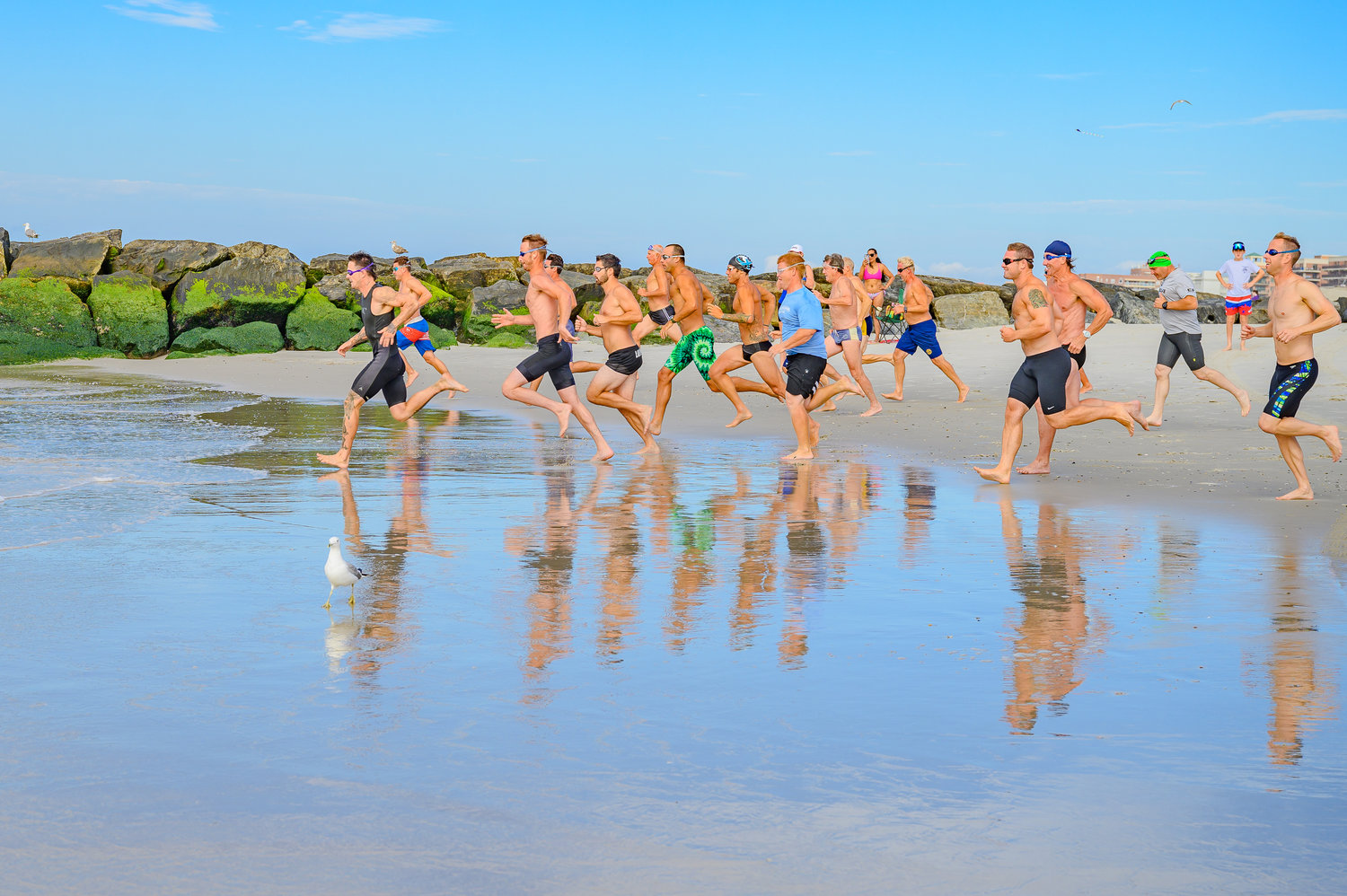 And they’re off, ready to swim 400 yards, paddle 800 yards and then run 1 1/2 miles on the beach.
Bob Arkow/Herald
By James Bernstein

There were blue surfboards sitting on Riverside beach this past Sunday morning, ready to take riders onto the gently bobbing ocean waves. There were young people limbering up for a mile-plus run. But of the approximately 100 people on the beach that day, no one understood better what the event was really all about than Lauren Kiefer-Foley.

Her brother, New York City firefighter Michael Kiefer, was killed at the World Trade Center in Lower Manhattan on 9/11. Kiefer was 25 years old and had joined the NYFD only nine months before the terrorist attack. He was a member of Ladder Co 132 in Brooklyn. The company lost six firefighters on 9/11, including the “probie” Kiefer, who lived in Franklin Square and was a volunteer in several Nassau County departments.,

For most years since 9/11, Long Beach has hosted a “Swim Paddle, Run” event in Kiefer’s honor.

His sister, a 42-year-old special education teacher from Franklin Square, brought her 11-year-old son, Jack, to the event that calls on participants to swim 400 yards, paddle 800 yards and then run  1 1/2 miles on the beach. Kiefer, his sister said, had been a Long Beach lifeguard, and the event is something he would have loved.

“He loved his family, the fire department, and the beach,” Kiefer-Foley said.

Her brother, she said, never wanted to be anything but a firefighter. At his first birthday party, his birthday cake was adorned with a toy fire truck. “Being a firefighter was in him,” his sister said. “It was his destiny to be a firefighter, and he fulfilled it at a very young age.”

As the terror attack unfolded on 9/11, Kiefer-Foley said, she worried first about her father, Bud, a civil engineer, who worked for the U.S. Army Corps of Engineers at 20 Federal Plaza, near the trade center. He made it home and asked his daughter if she had heard anything about her brother.

But as the hours and days wore on there was no sign of Kiefer.

“But we still had hope,” his sister said. “We knew if anyone could survive, it would be him.” Kiefer had worked as an FDNY paramedic for a year and a half. He had studied at the John Jay College of Criminal Justice and was a volunteer at Hempstead’s South Side Ladder Co., and with the Freeport department as well.

“He was born to serve,” his sister said.

Groups of young men and women, and some older folks as well, listened as the Skudin brothers - Will and Cliff - Long Beach;’s surf masters, demonstrated the best way to ride the waves safely and quickly. Long Beach chief lifeguard Paul Gillespie cautioned anyone experiencing cramping to raise their arms and they would be helped out of the water.

The crowd was ready for action.

Hope Brenkert, 24, traveled from her home in East Moriches to be at the event, so she could join friends who were Hempstead volunteer firefighters. An accountant at KPMG, she said she was glad to be outside for the day.

“It’s a good cause and a good day,” Brenkert said. “It’s also about remembrance.”

In fact, said John McLaughlin, who was helping coordinate the event, that is exactly what it was all about., “We want to show his family that we haven’t forgotten,” McLaughlin said. “That’s the most important part of this.”

On 9/11, as they have done every year, the Kiefer family will spend the day at Ladder 132.  “We want to be with his brothers,” his sister said.

Kiefer had met a young lady, and was saving up for a wedding ring. His remains were never found.