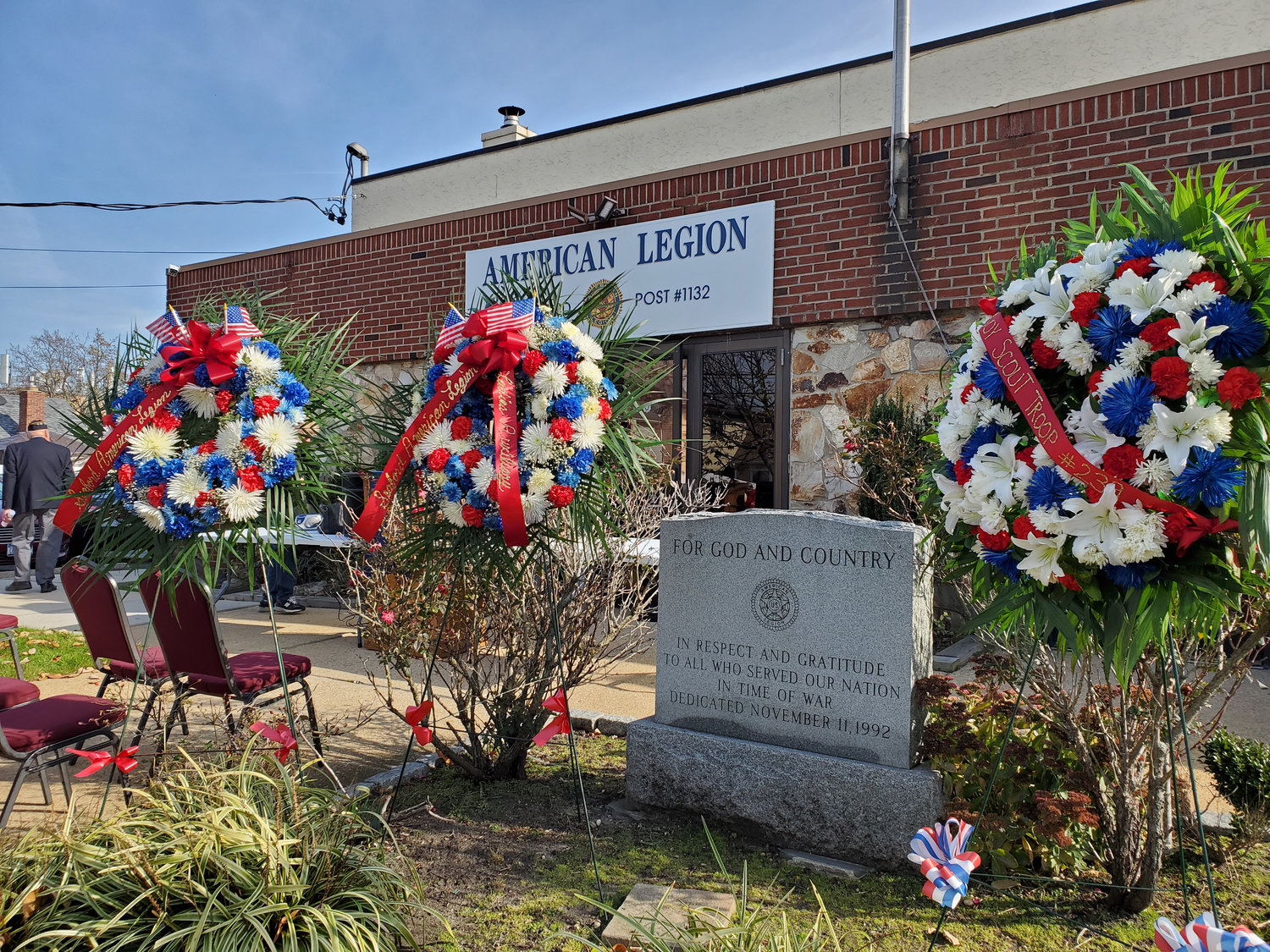 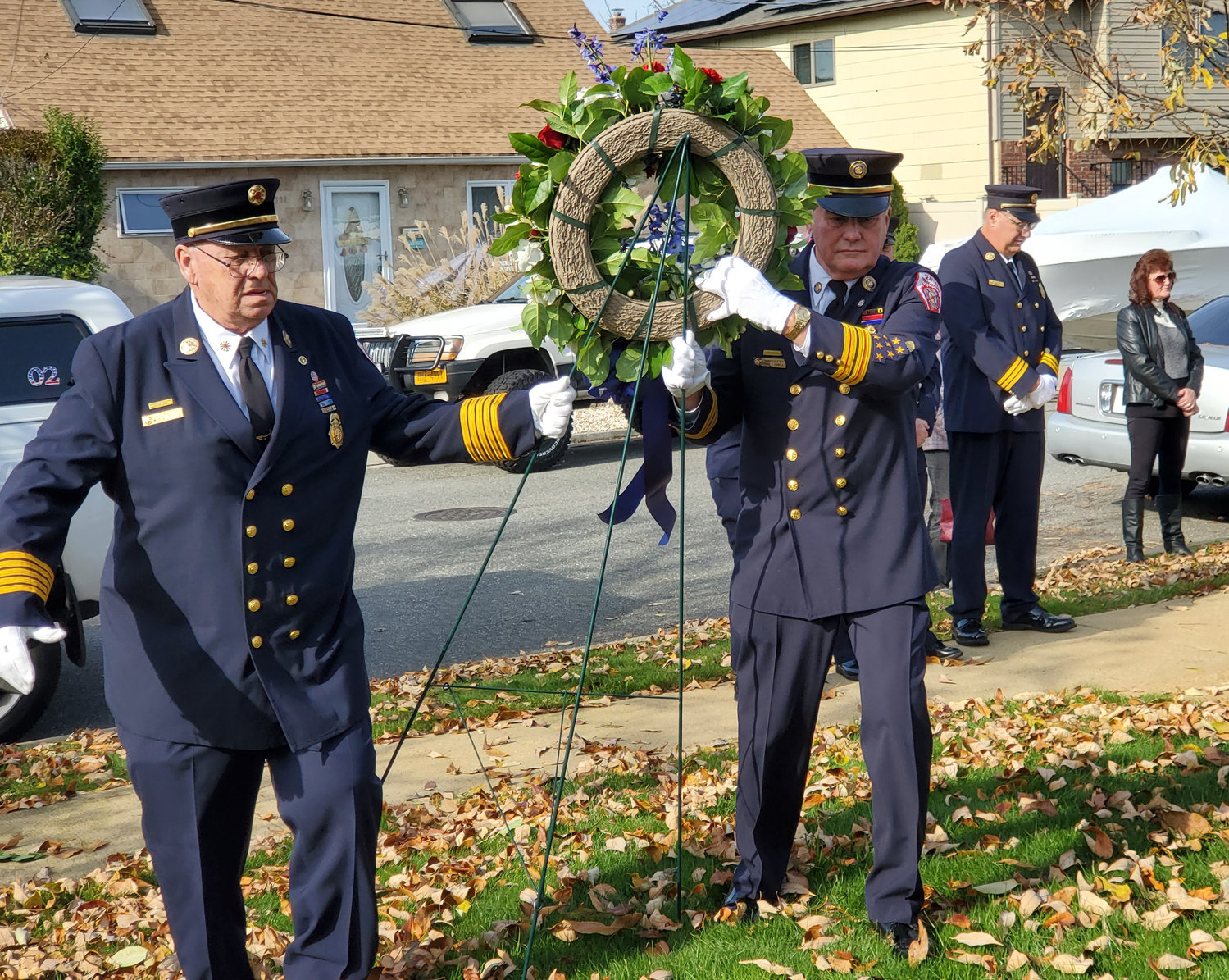 Members of the Seaford Fire Department presented a wreath during the service.
J.D. Freda/Herald-Citizen 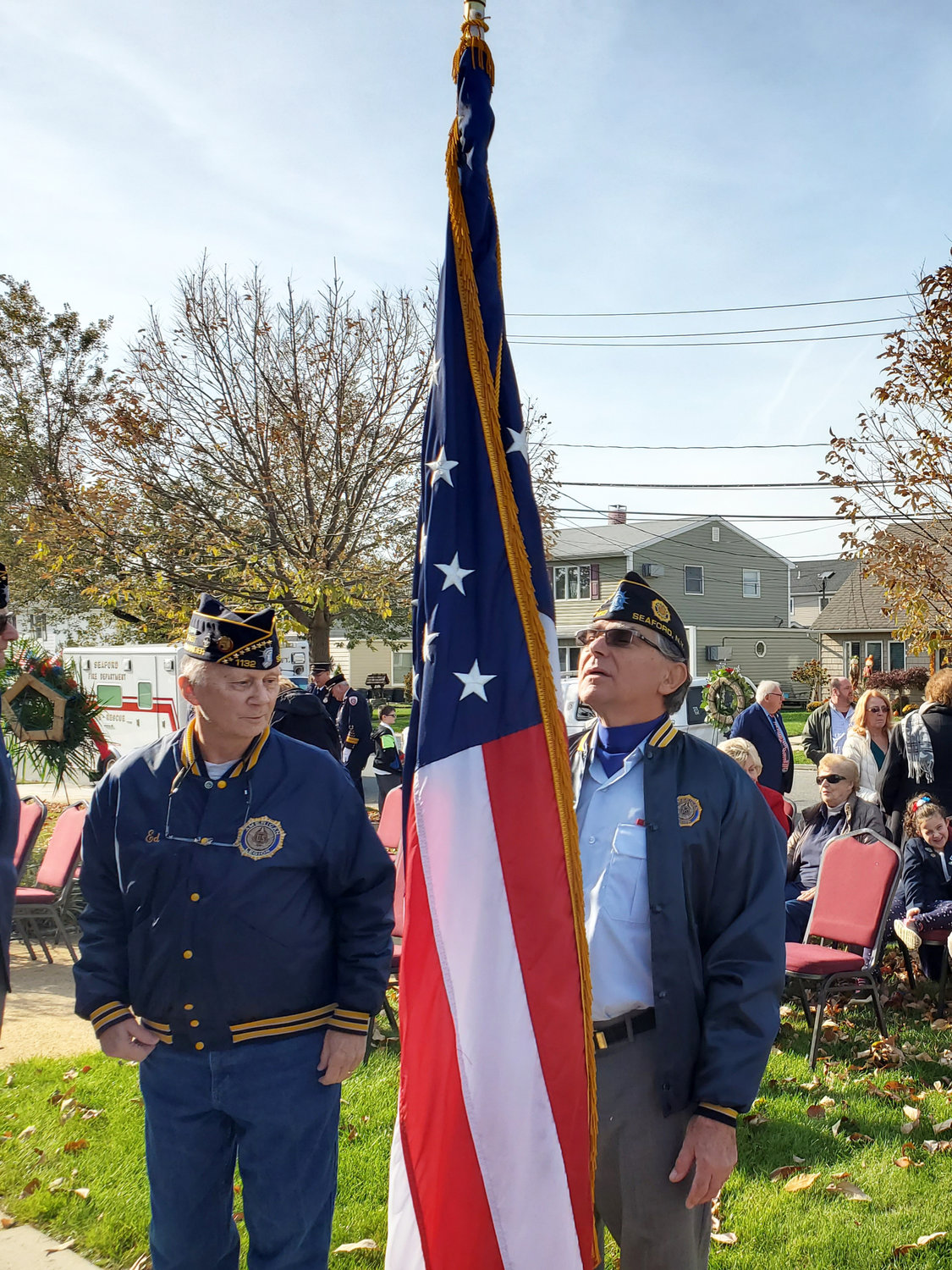 The American flag was erected near the front lawn for the Veterans Day ceremony.
J.D. Freda/Herald-Citizen 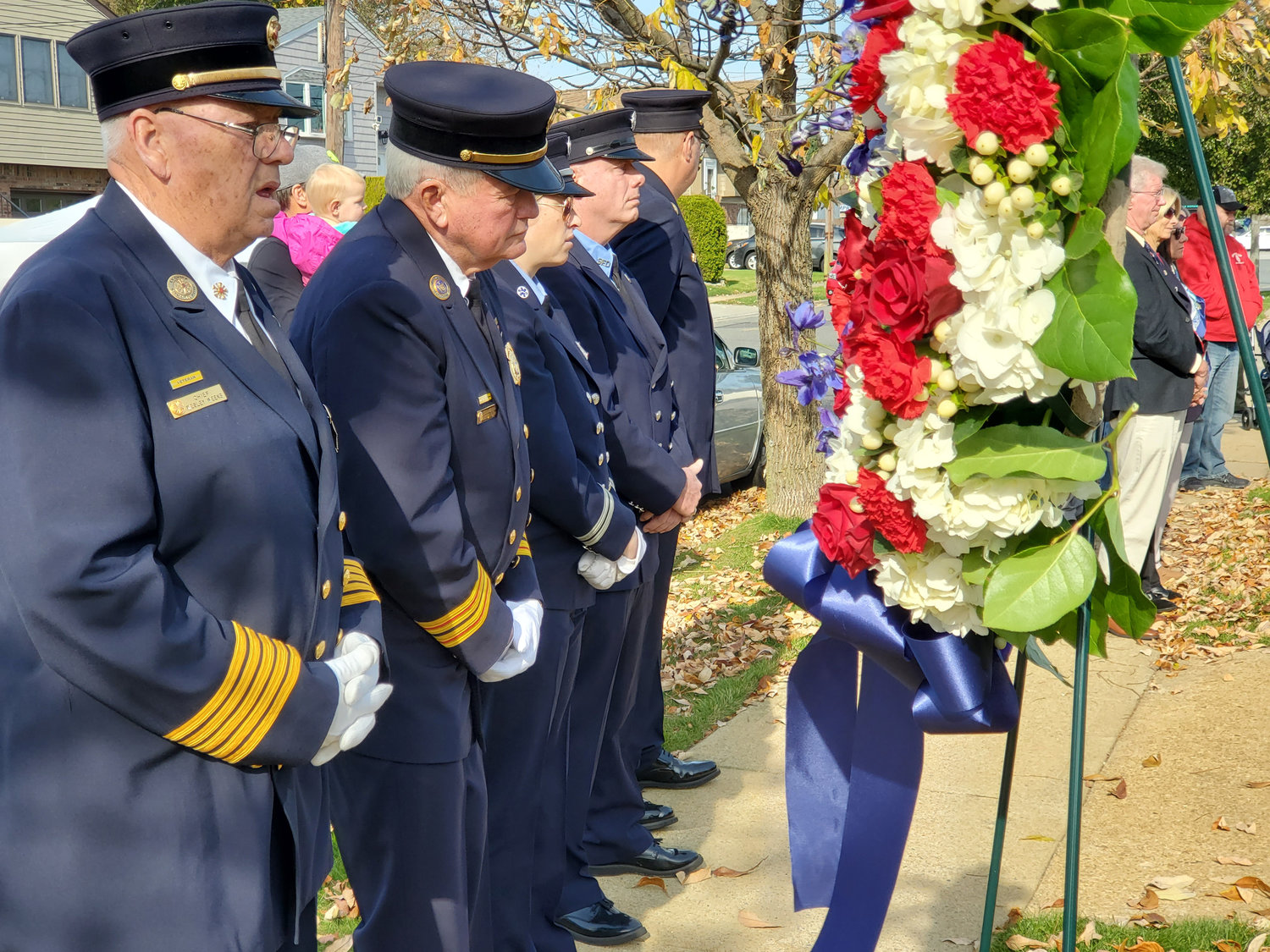 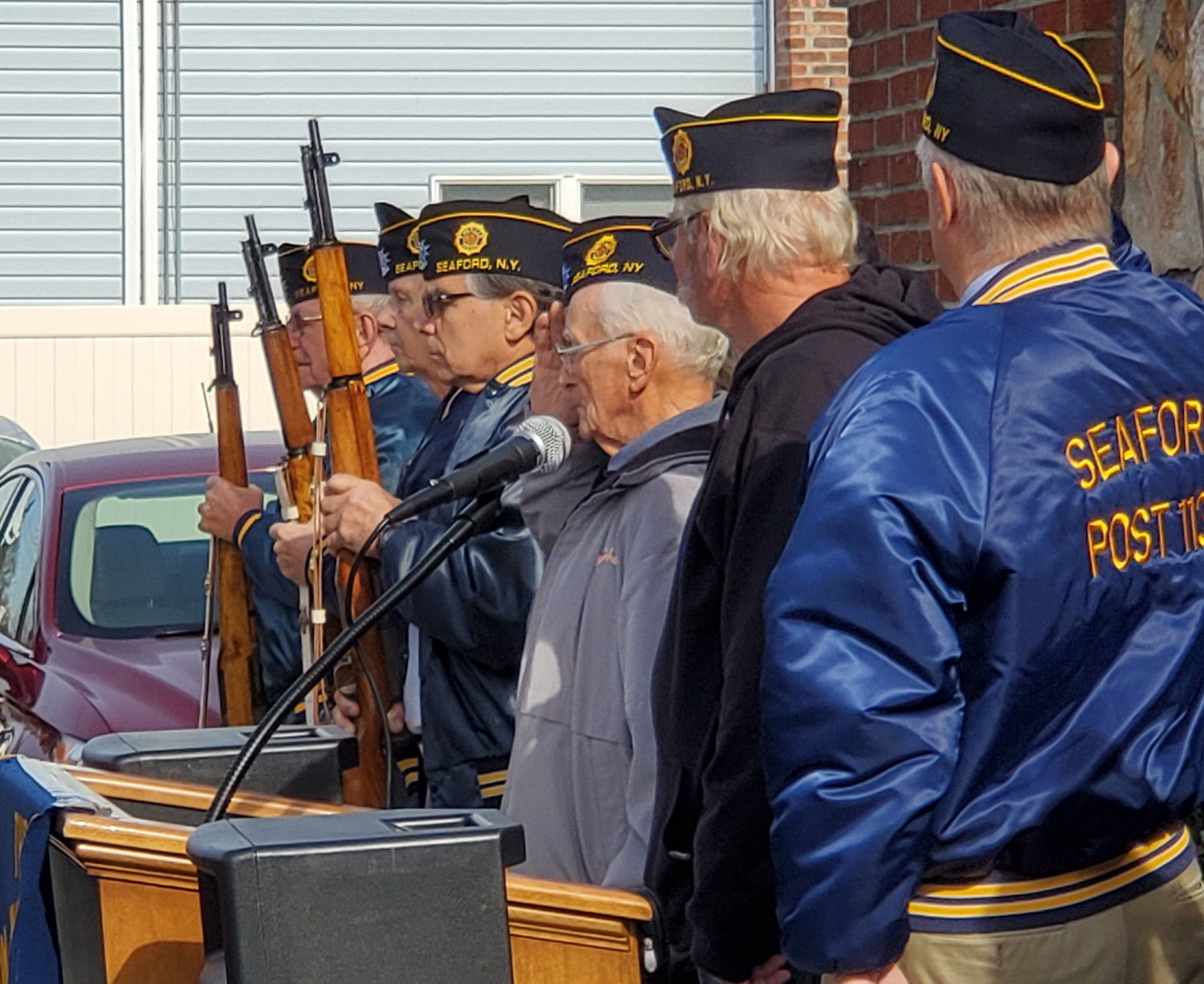 American Legion members shot blanks from rifles into the sky as the ceremony came to its conclusion.
J.D. Freda/Herald-Citizen
Previous Next
By J.D. Freda

Seaford American Legion Commander Bill Hoehn stood behind the lectern along with many fellow members. Community members had filed in to sit in chairs laid out on the front lawn of the post. The American Legion’s chaplain Charles J. Wroblewski had led a prayer where all who attended bowed their heads in respect and in remembrance.

“This post has been here since I was little, I used to live down the road,” said State Sen. John Brooks, who attended the event. “I think it is important that we remember everybody who put the uniform of this country on, and I think this is the way that it should be: A small community getting together to remember.”

The community event paid special tribute to Armistice Day — the holiday’s original designation to mark signing of the armistice between the Allies and Germany ending the First World War. It took effect at the eleventh hour or the eleventh day of the eleventh month in 1918. At 11:00 a.m. on the front lawn of the American Legion Post, a salute was given to the American flag to honor the 101st anniversary of the signing. June of 2019 also marked the 100th anniversary of the Treaty of Versailles.

The presentation of the wreath by the Seaford Fire Department occurred just before American Legion members rifled blanks into the sky. The members stood at attention as the flag waved gently in the wind. One man standing with his hand at salute above his brow and his eye on “Ol’ Glory” was John T. Diehlmann.

Diehlmann, 96, of Seaford, was stationed in the China-Burma-India (CBI) Theater during World War II. He flew Douglas C-47 aircrafts and dropped troops into various territories.

The Seaford native started his service in the latter part of 1942, and was sent over to the CBI Theater in 1944. After flying multiple missions, he came home finally in 1945.

“We’ve been celebrating Armistice Day for many years,” Diehlmann said. “So, [Veterans Day] is something that takes into account something more than just the World War I veterans that died. Its shows that we have progressed a long way from where we were.”

As the ceremony came to an end, attendees were invited inside for hot dogs and refreshments. Younger generations sat at tables with war veterans and shared conversation inside the hall.

“Last week we had the opportunity to vote,” Brooks said. “They made that possible. I think it’s important that we spend this time – and it’s not the size holiday it should be – but really take the time to remember.”