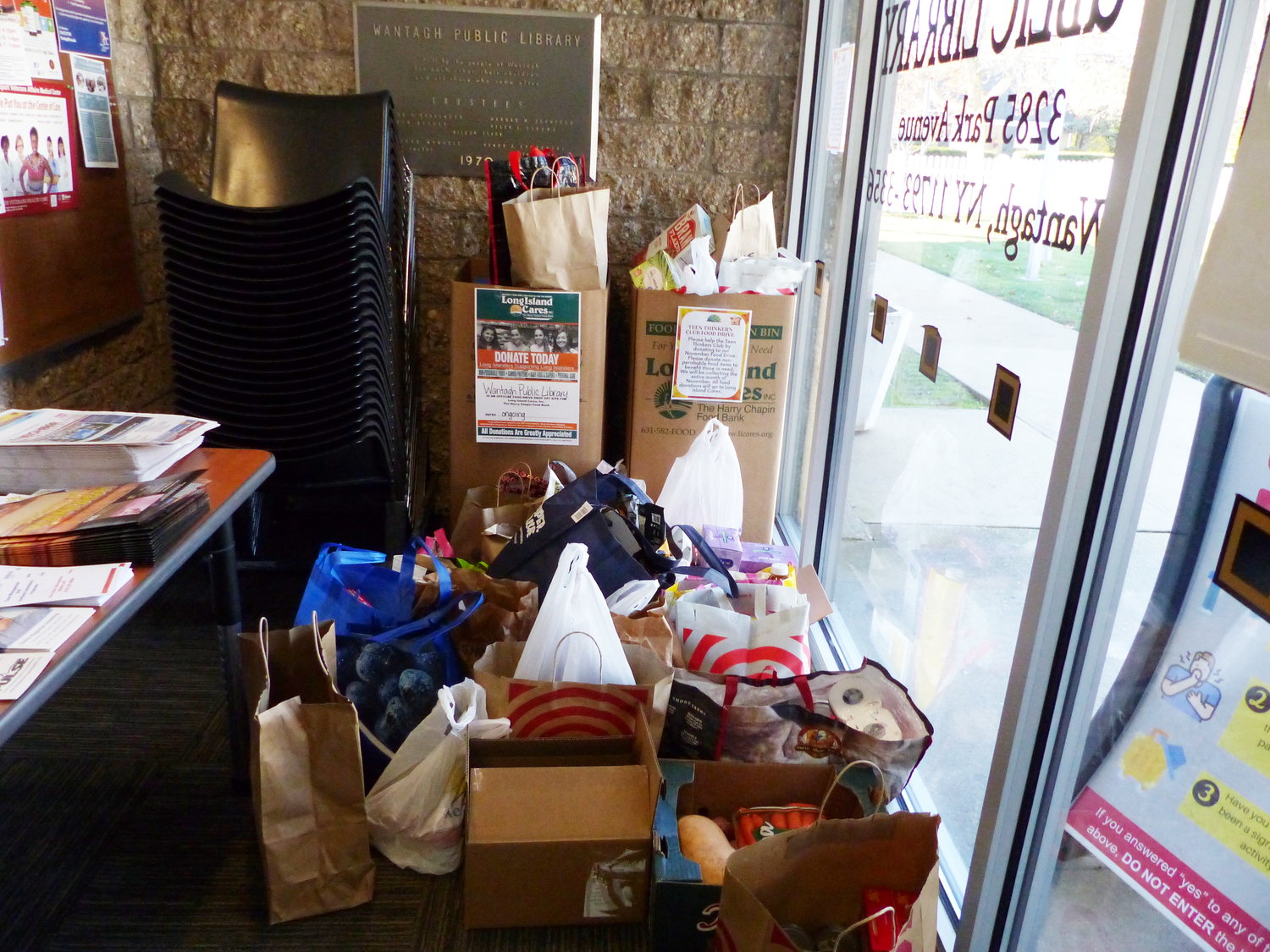 The food drive was a huge success, with the collection bins overflowing and forcing the library to dedicate a wing of its lobby to the drive.
Michael Malaszczyk/Herald
By Michael Malaszczyk

Members of the newly formed Teen Thinkers Club at Wantagh Public Library — a group dedicated to carrying out charitable activities — rolled up their sleeves and immediately got to work with two holiday-driven projects.

The club, comprising members ranging from the 6th to 12th grades, meets monthly at the library to brainstorm ideas for charitable activities that can go towards community service hours. This year, the club’s members took on two holiday season goodwill projects. In November, they helped to run a food drive, and in December, they will orchestrate a toy drive.

“The Teen Thinkers Club helps the youth work towards their community service goals that they need for school,” Stephanie Johrden, who works at the Wantagh Library, said. “They meet once a month to develop their areas of interest and then figure out what they can do to help the community.”

According to Carly Cucci, youth director at the library, the Teen Thinkers Club is off to a tremendous start in its first year of operation.

“We were expecting a good turnout, but we weren’t expecting what we got,” Cucci said. “We had advertised it in our monthly newsletter.”

Two boxes were set up for the food donations, and they quickly overflowed, library officials said. The library dedicated a wing of its lobby to accommodate the amount of food donations and other essential items such as baby formula. All of this will be going to Long Island Cares, which will distribute it to the needy throughout the island.

“The teens were very appreciative of the effort from the community,” Cucci said of the 10 teenagers involved in the club. “And they thank the community for coming out. We hope to be as successful with the toy drive, and hope to be even more successful next year.”

The toy drive will begin on Thursday, Dec. 1, and the club will be working with the Theissen Foundation. The foundation already began its holiday toy drive in November, but now will have a new ally in the Wantagh Library.

“This is our 31st annual holiday toy drive,” John Theissen, the group’s founder and owner, said. “I started this 31 years ago on my mother’s front lawn in Wantagh.”

Theissen, a Wantagh native, attended MacArthur High School. The Theissen Foundation is based directly in Wantagh but has distribution boxes all over Long Island, in locations such as libraries, restaurants and banks. It primarily distributes toys to children on Long Island but sometimes goes to the city as well. In June, the foundation worked with Nassau County police to send toys to children in Buffalo and Uvalde in the wake of tragic mass shootings there. The foundation prefers toys that are still in the box and in perfect condition but also accepts gift cards. The toys are handed out to children in hospitals, shelters and other service centers.

While the foundation itself occasionally distributes the toys, usually a designated social worker from one of the donation spots picks up the toys from its office.

“The purpose is not to make sure we are there when the toys are given out, but rather to ensure that the children get the toys in time,” Theissen said. “It’s nice because the children get our toys as if it’s coming right from Santa or from their parents.”

Being a former Wantagh teenager himself, Theissen is especially appreciative of the effort from the library’s Teen Thinkers Club.

“It’s great that kids these days have so many opportunities to help others out,” Theissen said. “It’s important for these kids to know that not everything out there is perfect, and there’s always something good to be done. Everyone tends to take for granted what they have. But something as small as donating a basketball makes a huge difference in another child’s life.”

The Wantagh Library’s toy drive will take place from Dec. 1 through Dec. 20.