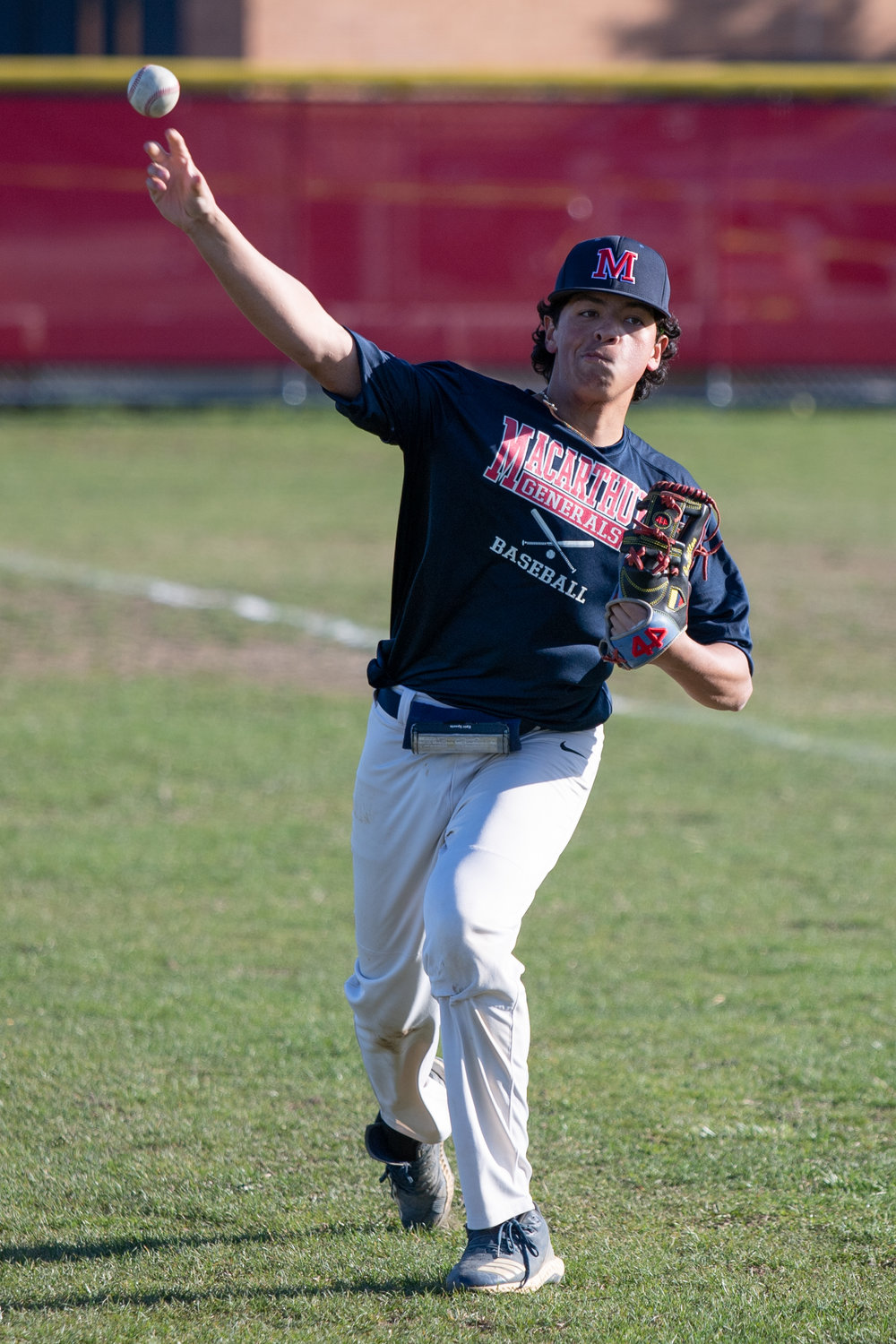 Senior Ryan Castrillon serves as one of the Generals’ starting pitchers and spends two games each week at third base.
Media Origin Inc./Herald
By Garrett D. Uribe

While Costello, now in his 29th season as MacArthur's coach, still staunchly doubts any team could compare to his storied club of yore, a Labonte in the lineup isn't the only obvious tie linking this year's Generals to their state-title-winning forebears.

Through two league series, the MacArthur baseball team has cut a 6-0 swath through Nassau Conference A1 to sit alone in first place, winning its opening pair of games by a combined score of 23-0 – including a 12-0 combined no-hitter against host Long Beach May 31.

“We always have good pitching,” said Costello, whose club holds Nassau County's all-time lead in Diamond Awards for pitching (10), an annual honor equivalent to the major leagues’ Cy Young Award. “At this point, though, I’m really more pleased with how we’re hitting.”

After coming alive last season at the halfway mark with a seven-game win streak to finish 13-7 overall, the Generals – who fell last spring in the county Conference 2 finals to eventual Long Island Conference 2 champion Garden City – are picking up where they left off thanks to improvements at the plate and a staff that has seen the return of an ace, and the continued rise of a lefty prodigy.

Matt Sarni (2-0, 10 strikeouts in 10 innings) is back on the hill for MacArthur for the first time since undergoing Tommy John surgery in 2020. The all-league senior righthander/shortstop also boasts a .444 batting average (second on the club among batters with 20-plus plate appearances) and has scored a team-leading 13 runs, while sophomore southpaw Tyler Bonsignore – who led the Generals with 4 wins last season (tied) – also has a pair of victories (2-0) and has fanned 14 in 11 innings. At Herald press time, neither three-pitch-mix MacArthur hurler had yet to allow an earned run.

“Matt’s finally showing what he can do when he’s healthy,” Costello said. “Tyler has a great mix of pitches. He’ll be a force for years to come.”

Labonte’s 13 RBIs lead MacArthur while his lone homer ties him with Sarni and junior All-Conference outfielder James Eden (.389 BA) for team lead. Junior Sebastian Loor, an All-Conference shortstop last season filling in for Sarni, is back at catcher – his natural position – and leads MacArthur among qualified batters with a .455 average and has a team-high five doubles, while senior righty Ryan Castrillon (1-0, 15 Ks 8.1 innings) throws third in the Generals’ rotation when not starting at third base.

“The big difference this year is quality at-bats,” Costello said. “We didn’t have the best plate approach last season, which was my fault as a coach. We spent all winter fixing that.”

He added: “I think we’ve gotten much better.”

Infielders Joe Thatcher and Chris Picarella are each batting .353 for MacArthur.