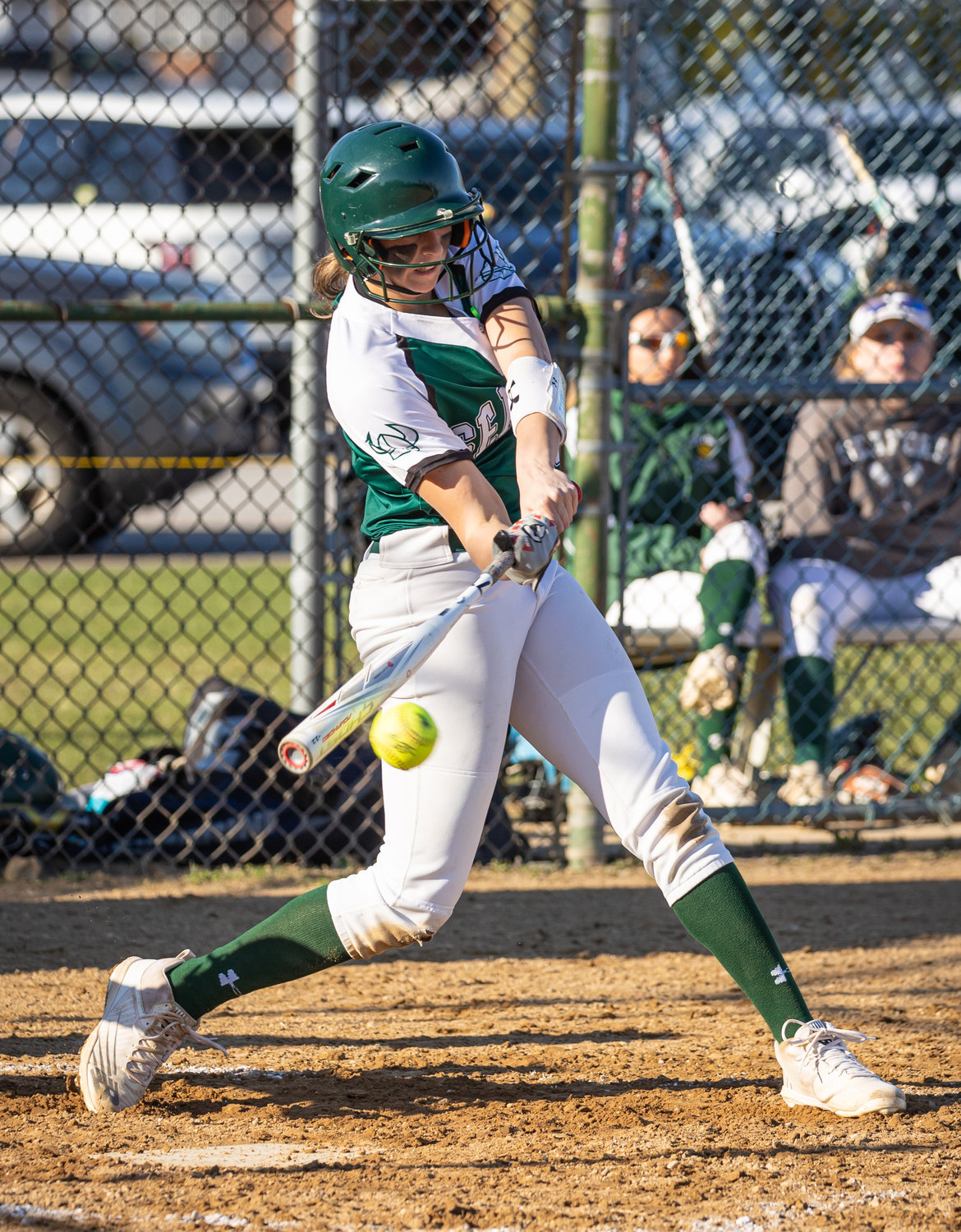 Freshman Skylar Secondino, who is batting .462, is Seaford’s primary shortstop and also contributes in the pitching circle.
Karen Millindorf/Herald
By Tony Bellissimo

If the first trip through the Conference 2 softball schedule is any indication, Seaford will be locked in tight battles in each of its next three games as it looks to rise in the standings in Joe Nastasi’s first year at the helm.
The Vikings have Kennedy, Long Beach and Clarke on the docket and each of the first meetings resulted in one-run outcomes, including two on the positive side for Nastasi’s senior-led squad. Senior catcher Megan Haug drove in two runs April 8 to lead a 4-2 victory over Kennedy, and senior pitcher Jamie Horodecki blanked Clarke, 1-0, and drove in the game’s only run April 20. In between came a hard-fought 2-1 defeat at Long Beach.
“The girls are passionate about softball and competing every day,” Nastasi said. “Different girls have stepped up in different aspects and every game has been a battle. We haven’t gotten the bats going as much as we’d like yet, but I feel we’re right on the verge of breaking through.”
As the season entered the second half, Seaford was 3-6 overall and 2-5 in conference games. The starting battery of Horodecki and Haug bring chemistry and leadership to games and practices, Nastasi said, along with the Vikings’ five other seniors.
“Jamie and Megan have been working together for a while and you can just see it,” Nastasi said. “Jamie has some nasty stuff and she’s not afraid to pitch inside. She’s a high-end competitor in the circle and a leader on and off the field.”


Haug, the coach noted, “is a major asset defensively and has put some quality at-bats together.”
Horodecki, who occasionally plays shortstop as freshman Skylar Secondino gets some innings of work, typically hits third in the order. Both Horodecki and Secondino were batting .462 after 26 plate appearances.
Secondino, who had two hits and a key RBI and run scored in the win over Kennedy, was a member of the varsity last spring as an eighth-grader. “Skylar is a talented young player with a lot of heart,” Nastasi said. “It’s nice that she’s surrounded by seven seniors. That’ll only help her development.”
Junior Gabby Bellamore (second base) comprises the defense up the middle with Secondino/Horodecki and is off to a hot start with the stick, Nastasi said. Bellamore led the team in RBIs heading into this week’s action and has hit in each of the top three spots in the lineup. “Gabby is a hard contact hitter,” Nastasi said.
At the infield corners, senior Anita Farkash is relied on heavily at third base and offensively, and junior Jamie Young starts at first and is batting .333. The outfield features plenty of speed. Senior Grace Cassarello patrols center and bats leadoff, sophomore Alexa Villeck moved to right field from the infield, and senior Ava Botti has gotten the bulk of work in left.
“I’m hoping to bring a lot to this program,” Nastasi said. “It’s been a great start. I couldn’t ask for a better group.”