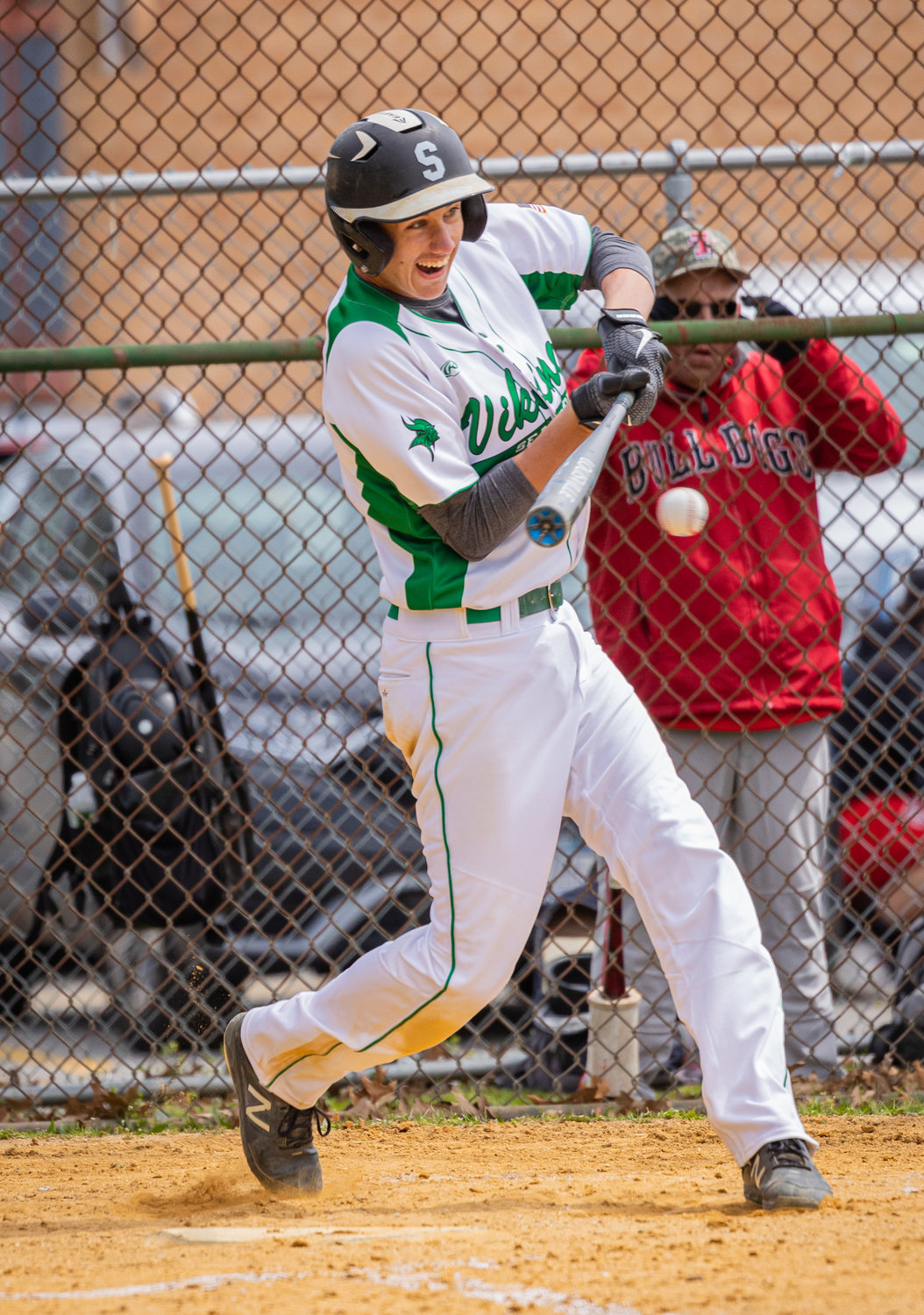 Senior shortstop Evan Block is raking at the plate with a .500 average while helping the Vikings to a 6-2-1 start.
Karen Millindorf/Herald
By Andrew Coen

At the midway point of the season, Seaford baseball is clicking on all cylinders.
The Vikings entered the last week of April at 6-2-1 in Conference A-IV and are positioned to finish atop one of the most challenging high school baseball leagues in New York State. The hot start included a series sweep of defending Class A champion Island Trees last week from three straight shutouts by a combined score of 19-0.
“We are hitting in the lineup one through nine and getting great pitching,” Seaford coach Mike Milano said. “We are in a good spot right now.”
Junior pitcher Sean Costello has posted three wins as the ace of the staff. He struck out seven and allowed just two hits in Seaford’s 12-0 win against Island Trees on April 18 in a game shortened to five innings.
First-year varsity pitcher Billy Kind has also shined on the mound this spring tossing a complete-game four-hitter in Seaford’s 5-0 win at Island Trees in game two of the series. Senior Jack Kellner, who has served as the number three pitcher the last few weeks, threw a complete-game, two-hitter in a 2-0 home win against Island Trees last Thursday to complete the sweep.


Senior catcher Joe Bello leads the pitching staff behind the plate. Milano said Bello worked hard in the offseason to improve his defensive skills and hitting.
“We would get to the batting cage as a team in the winter one night a week for hitting and throwing and Joe was coming off an hour workout with a catching instructor,” said Milano of Bello, who will play college baseball at CUNY Baruch next year. “He has controlled the running game and has really taken a step in the right direction as a defensive catcher.”
Junior second baseman TJ Harrington stepped up big in the Island Trees series delivering a two-run double in the 5-0 win followed by a two out, two run single with the bases loaded in the sixth inning in the 2-0 win the next day.
The Vikings have been getting a number of contributions in the lineup led by senior shortstop Evan Block, who entered the Island Trees series hitting over .500. Junior right fielder Kevin Knox has helped ignite the offense in the leadoff-spot while senior left fielder Brian Fader is hitting over .300,
Junior designated hitter Stephen Ierides, third baseman Nick Apollo, Kind, Costello and Harrington have also become forces at the plate this season.
Seaford concludes the regular season with three-game series matchups versus North Shore, Plainedge and Mineola. The Vikings are in solid shape to receive one of the four available playoff spots in Conference IV.
“Saying you are in the top four in this group is a big statement so our first goal is to make the playoffs,” Milano said. “Then if we have the playoffs we will re-access those goals and evolve to winning as many playoff games as possible and using what we think our biggest strength is, which is pitching depth, to our advantage.”