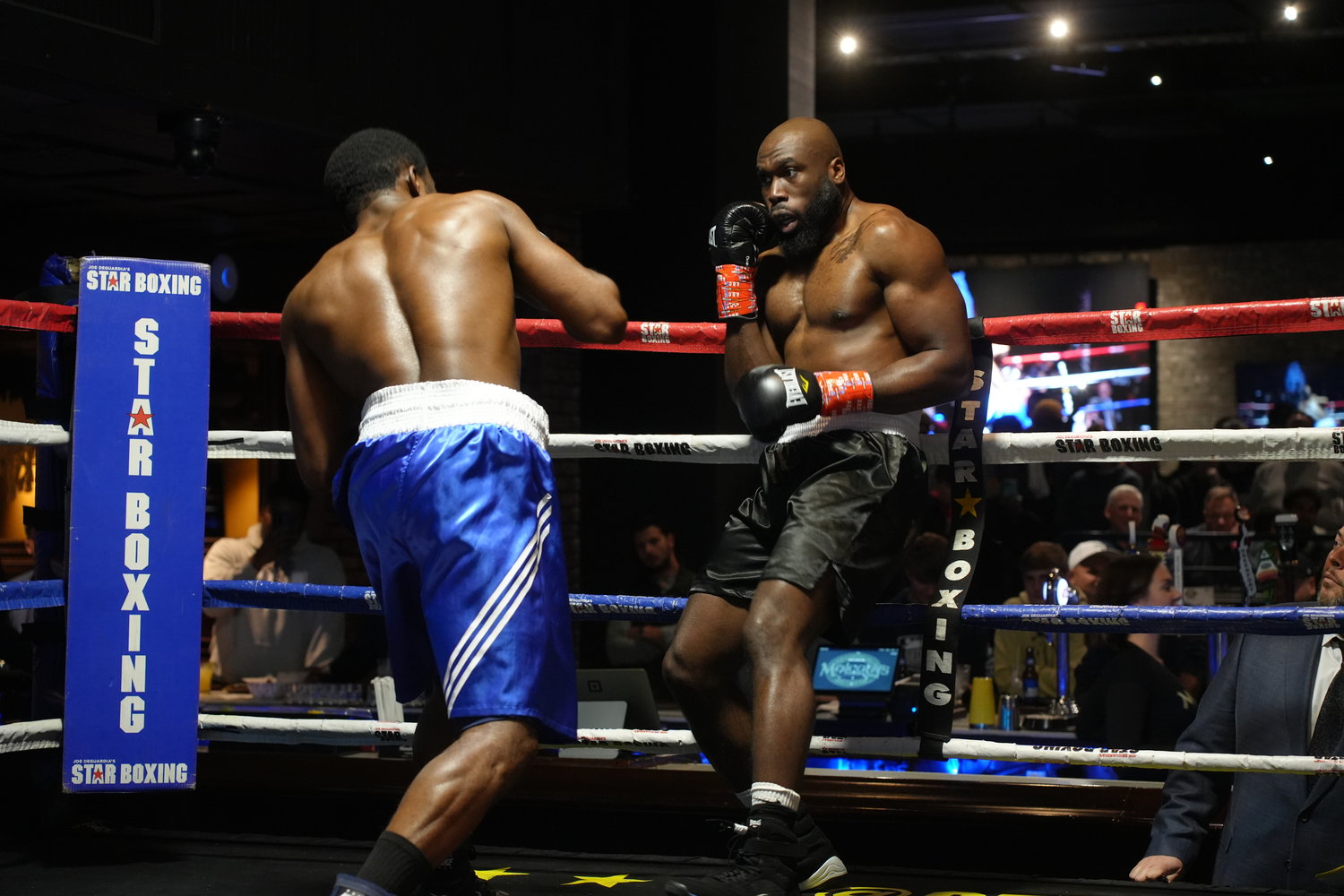 Iman Lee, right, who is from Elmont, landed a right hand on Dom Breen. The fight was Breen’s pro debut, but was a quick night’s work for Lee.
Tim Baker/Herald 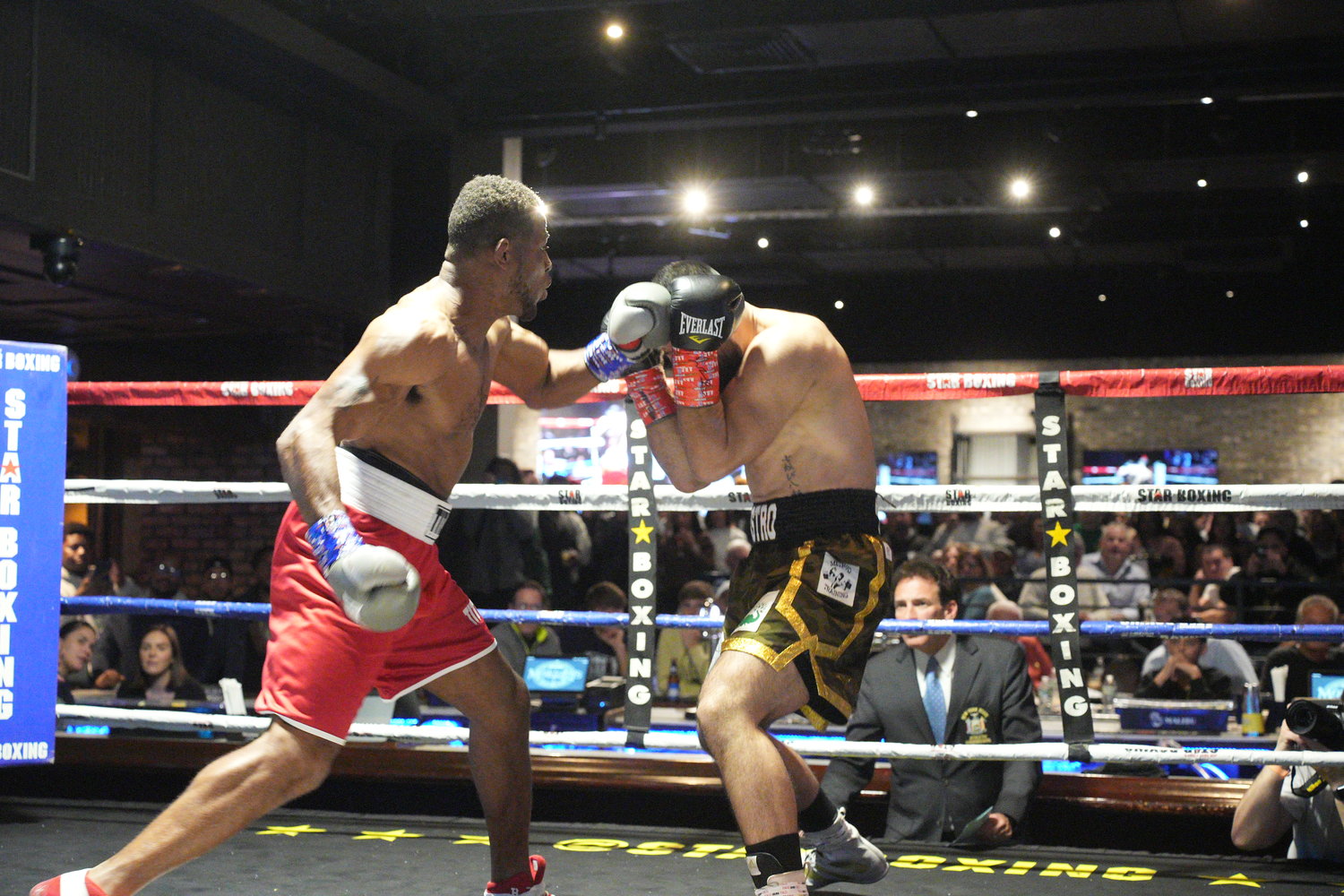 Keenan Raymond, in red, was game in defeat against Zay Flaherty, throwing an uppercut early. Flaherty weathered an assault from Raymond before knocking him out before the end of the first round.
Tim Baker/Herald 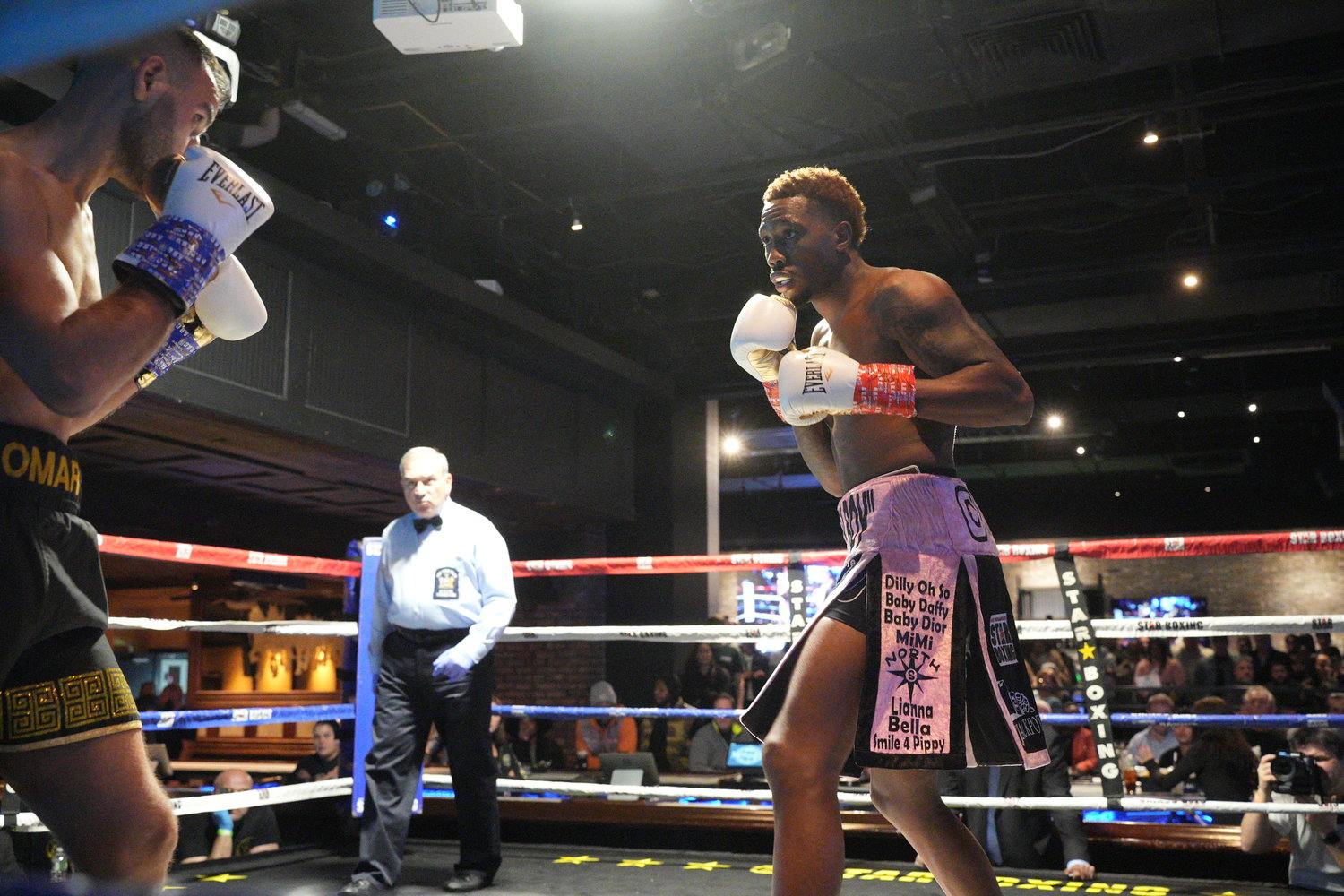 In the main event, above, Tyrone James, right, of Elmont cautiously stalked the experienced Omar Siala, of Germany, as referee Al LoBianco watched the action.
Tim Baker/Herald
Previous Next
By Michael Malaszczyk

You don’t have to dish out wads of cash for a late-night pay-per-view event to see an exciting night of boxing — the Wantagh-Seaford area may have just become a hot spot for exciting bouts.

Star Boxing has previously hosted fights on Long Island, mostly at the Paramount in Huntington, but “Shore Wars” was its South Shore debut.

“We needed to get something for Tyrone James,” Joe DeGuardia, former boxer and current president of Star Boxing, said. “Mulcahy’s is what fit for the date. And as you can see, it’s a great venue with a nice look to it.”

James was the A-side of the main event, squaring off against Omar Siala of Germany. Heading into this bout, James boasted a perfect prospect’s record of 12-0, with nine wins by knockout. Siala is a grizzled veteran of the ring, holding a record of 39-20-3, with 23 of those wins by knockout.

The undercard was action-packed and had viewers on the edge of their seats, with all of the matches ending much earlier than expected.

In the first fight of the undercard, which took place in the super lightweight division, Ryan O’Rourke (8-0, 1 KO) of Dublin, Ireland squared off against Andreas Maier (8-5, 6 KOs) of Menden, Germany. O’Rourke has championship dreams, and was making his U.S. debut on this card. When the bell rang for the first round, O’Rourke wasted no time and got right to work with his jab. After the jab landed consistently, O’Rourke opened up with right hands and left hooks, dropping Maier several times before the referee stepped in to stop the fight. O’Rourke’s record improved to nine wins with two knockouts.

In the second fight, which took place in the cruiserweight division, Afunwa King (5-1 2 KOs), fighting out of the Bronx, squared off against Emmanuel Etienne (2-0) of Uniondale. Even though the crowd cheered on the Long Island fighter, King made short work of Etienne, dropping him with a monster of a right hand at the very end of the first round and winning by knockout. King’s record improved to six wins, with three knockouts.

Next up were super featherweights Iman Lee (4-0, 3 KOs) of Elmont and Dom Breen, of Staten Island, making his pro debut. Once again, the crowd was electric for the Long Island fighter, but Breen came out strong, working Lee for the first half of the round and backing him up. Lee remained composed, however, and once he had Breen’s timing down, he got right to work. He dropped Breen three times, prompting the referee to stop the fight. Lee’s record improved to five wins with four knockouts.

The co-main event saw Zay Flaherty (4-0, 2 KOs) of Elmont pitted against Keenan Raymond (1-4-1) of Warwick, R.I., fighting in the light middleweight division. Once again, the Long Island fighter was introduced to an eruption of applause and cheers, but Raymond took the fight to Flaherty from the opening bell and even looked to have Flaherty in a bit of trouble.

None of the undercard bouts went past the first round.

In James against Siala, fans were treated to a classic boxing trope, as the red-hot young prospect fought against the tough veteran.

“It is my dream to fight in America,” Siala, who is from Germany, said. “I have had 62 fights in Europe. This is a dream come true.”

James had high respect for Siala coming into the fight.

“He’s got more knockouts than I have fights,” James said. “He’s tough. He’s experienced. So I’m going to have to be smart and stay sharp in there.”

James added that he considers himself more of a boxer than a brawler, but predicted that he would win by knockout no later than the fifth round.

This prediction came true, as James won by knockout in the second round — the only fight that made it past the first round. The first round was action packed, with James starting strong and fast.

He pushed the pace and had Siala circling and against the ropes at times. Siala was unable to land anything of note, but showcased some good defense as he rolled with many of James’s shots and survived the first round. But James picked up the pace in the second round and overwhelmed Siala, dropping him twice, forcing referee Al LoBianco to stop the fight.

Overall, it was an exciting night, with all fights ending by early knockout. Given this success, Star Boxing might be bringing more fight cards to the South Shore, with Mulcahy’s being a marked location.