Walking in a winter land of wonder 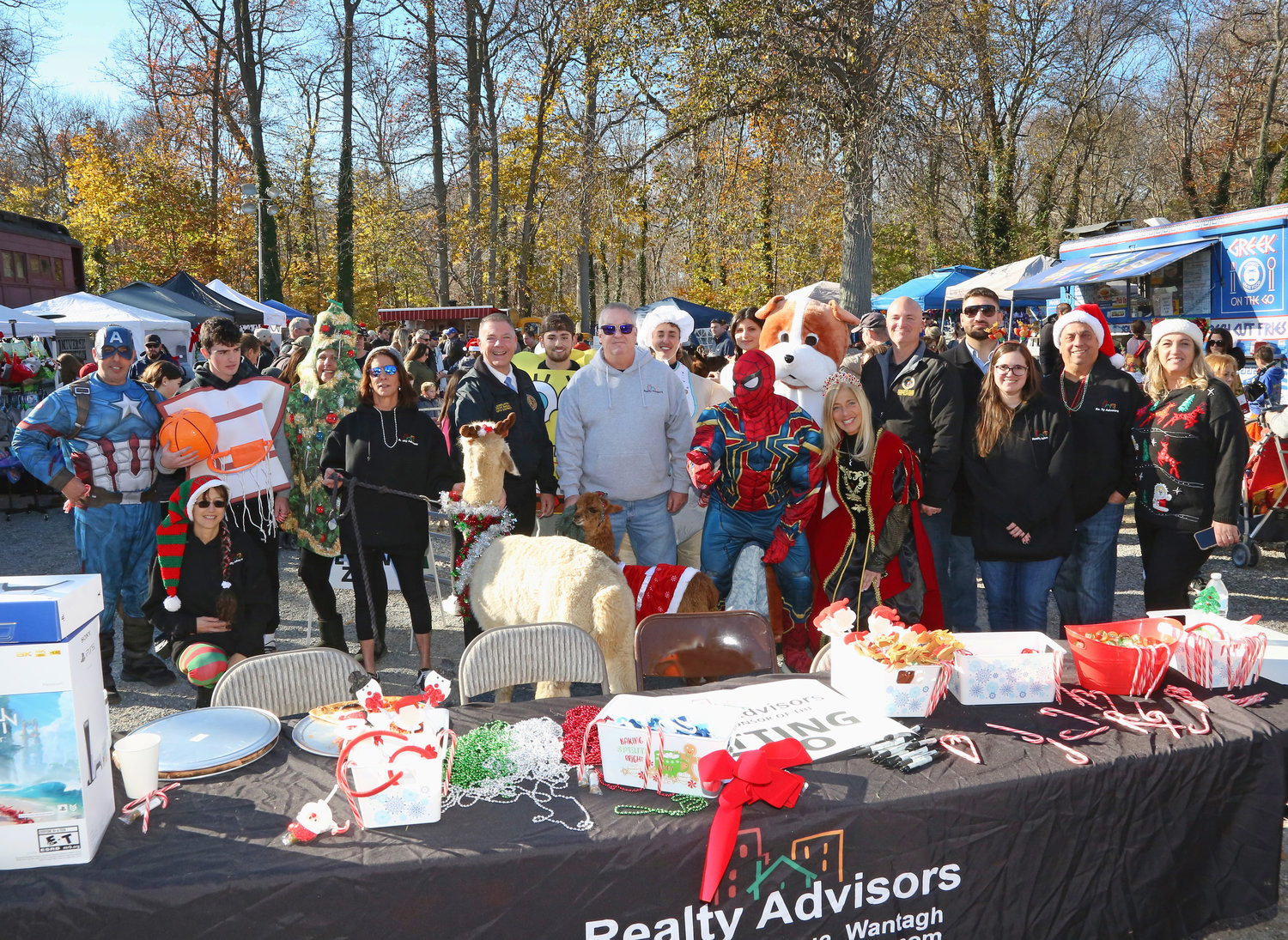 Elected officials and members of the Chamber of Commerce and Realty Advisors at the fourth annual Winter Wonderland celebration. Some even dressed up to heighten the holiday cheer.
Courtesy of Mark Simonson 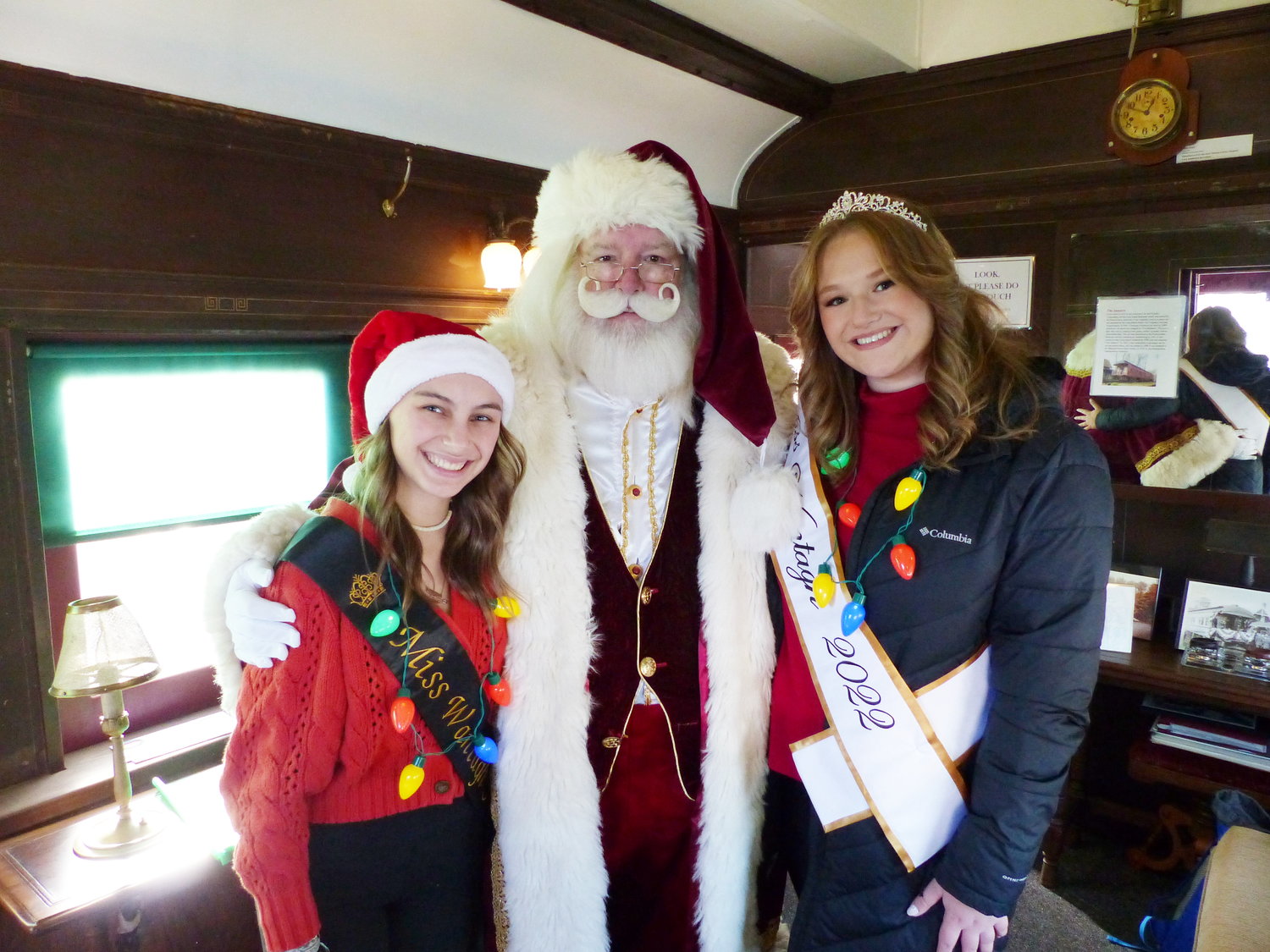 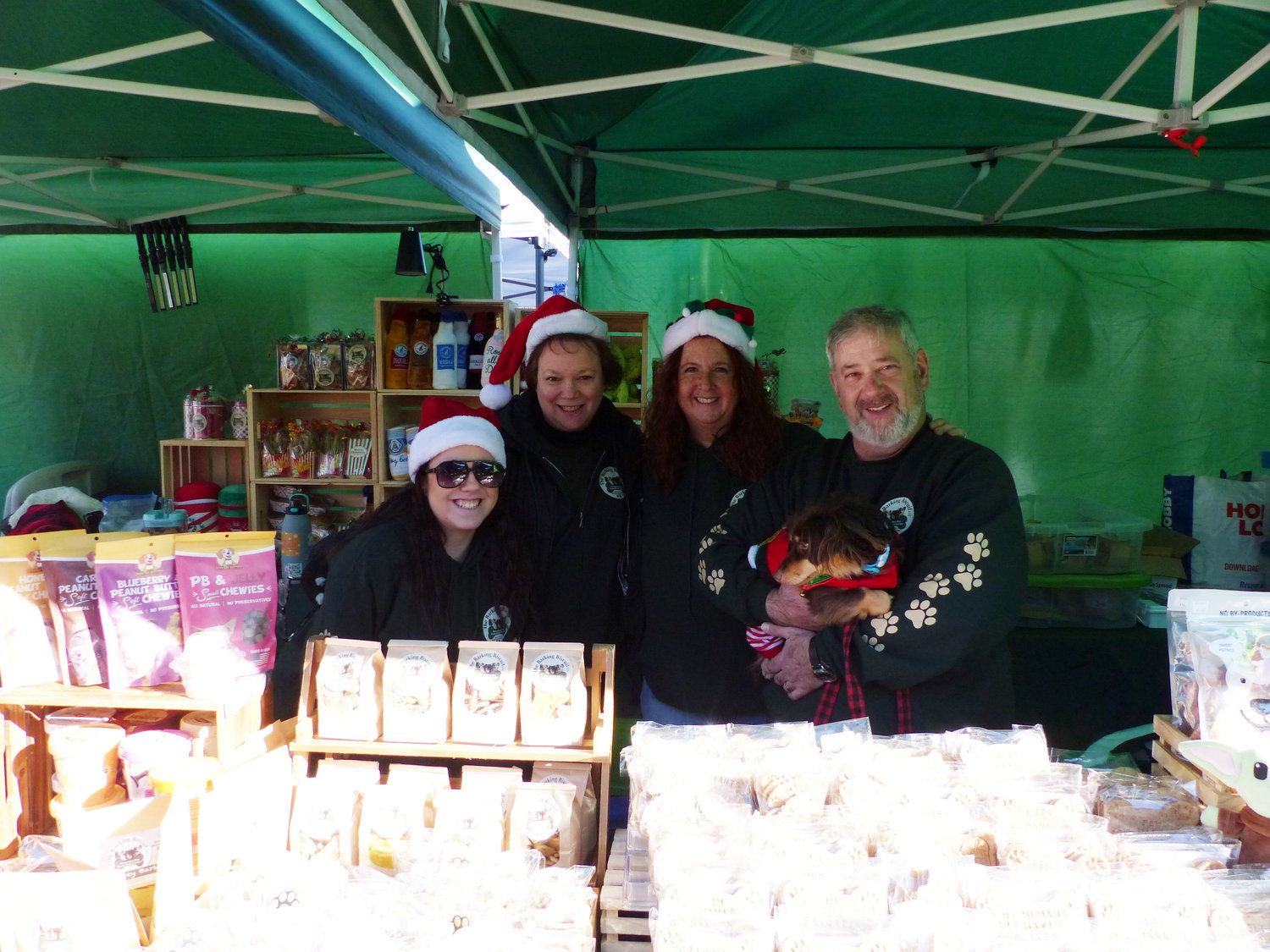 Business was booming for Hillary and Ira Reiter, at right, of the Barking Biscuit, with Emily and Ronni McLaughlin. The Reiters’ dog, Oscar, was also in attendance.
Michael Malaszczyk/Herald
Previous Next
By Michael Malaszczyk

The Wantagh Chamber of Commerce recently converted the county park at the Wantagh Preservation Society into a bustling hub of holiday cheer, hosting its fourth annual Winter Wonderland celebration.

Last Saturday, the chamber, along with Realty Advisors, hosted the festivities at the preservation society, on Wantagh Avenue, just east of the Wantagh Parkway. The site is in the heart of Wantagh, and for Seaford residents, is only slightly west of the hamlet’s borders. It is a designated county park, featuring tons of open space and a small forest behind it. With the exception of the Wantagh State Parkway separating it from Twin Lakes Preserve, the whole area is a window into old, rural Wantagh-Seaford.

This year’s event was held on a bright and sunny day, making it perfect weather for the festivities.

Sitting on the park’s land is an authentic Long Island Rail Road parlor car, a post office and a train station.

“We wanted to bring a little bit of a Bryant Park feel,” Cathy McGrory Powell, president of the Wantagh Chamber of Commerce, said. “We wanted to showcase our businesses and all of our phenomenal vendors. And of course, it’s better than Bryant Park.”

The open space in the park gave way to rows of vendors, a petting zoo and characters in costumes greeting families. The museum was open, with plenty on display for historically minded visitors, but the train station was converted into a stage for dance groups to showcase their skills to a large audience. In the parlor car was a surprise for children, as Santa Claus sat in the train ready to greet them.

“It gives that kind of old-time Christmas feel, like ‘Miracle on 34th Street,’” Powell said.

“We want to show off the museum as well because it is great. And what’s a better place to see Santa than on an old-fashioned train?”

Business was booming for all the local vendors as well. On hand were the beloved Pies on Wheels, Simply Greekalicious, Guac Shop and more.

The Barking Biscuit, a pet cookies business founded by Ira and Hillary Reiter, pitched a large tent right next to the museum, with rows of freshly baked, holiday-themed cookies for animals. Oscar, the Reiters’ dachshund, was also on hand and quickly gained celebrity status. The Reiters founded the Barking Biscuit a few years ago as a passion project, and it quickly grew.

“We’ve been doing Winter Wonderland since the first one,” Ira Reiter said. “This is our third anniversary doing this for the Barking Biscuit. The first event we ever held was here, three years ago. We love the town, we love the atmosphere of the Winter Wonderland.”

Local dance groups performed at the event as well, including the Jewel Tones, Show Stompin’ Irish Dance, Spotlight Studios, and Platinum Performance Dance Academy. They showed their dance steps right outside the museum, on the platform of the recreated train station.

“It’s a great way to celebrate the holiday and showcase all of our local vendors,” said Rhoads, who was elected to his first term in the State Senate last month. “It’s a chance for our community to come together and enjoy the celebration. And of course, the parlor car is a perfect setting for Santa to come. It’s great that they get the real Santa Claus to come as well.”

The Winter Wonderland went well into the evening, ending with the lighting of the Christmas tree.

Laura Dupkin Memisha, who is on the board of the Wantagh Public Library and co-sponsored the event with Realty Advisors, said it couldn’t have gone any better. She is also a trustee for the Chamber of Commerce.

“We look forward to this all year, and it takes us 11 months to plan,” she said. “We love our community so much, and all we want to do is see our people happy. Judging by the thousands of people walking through the gate, I’d say we succeeded in that.”