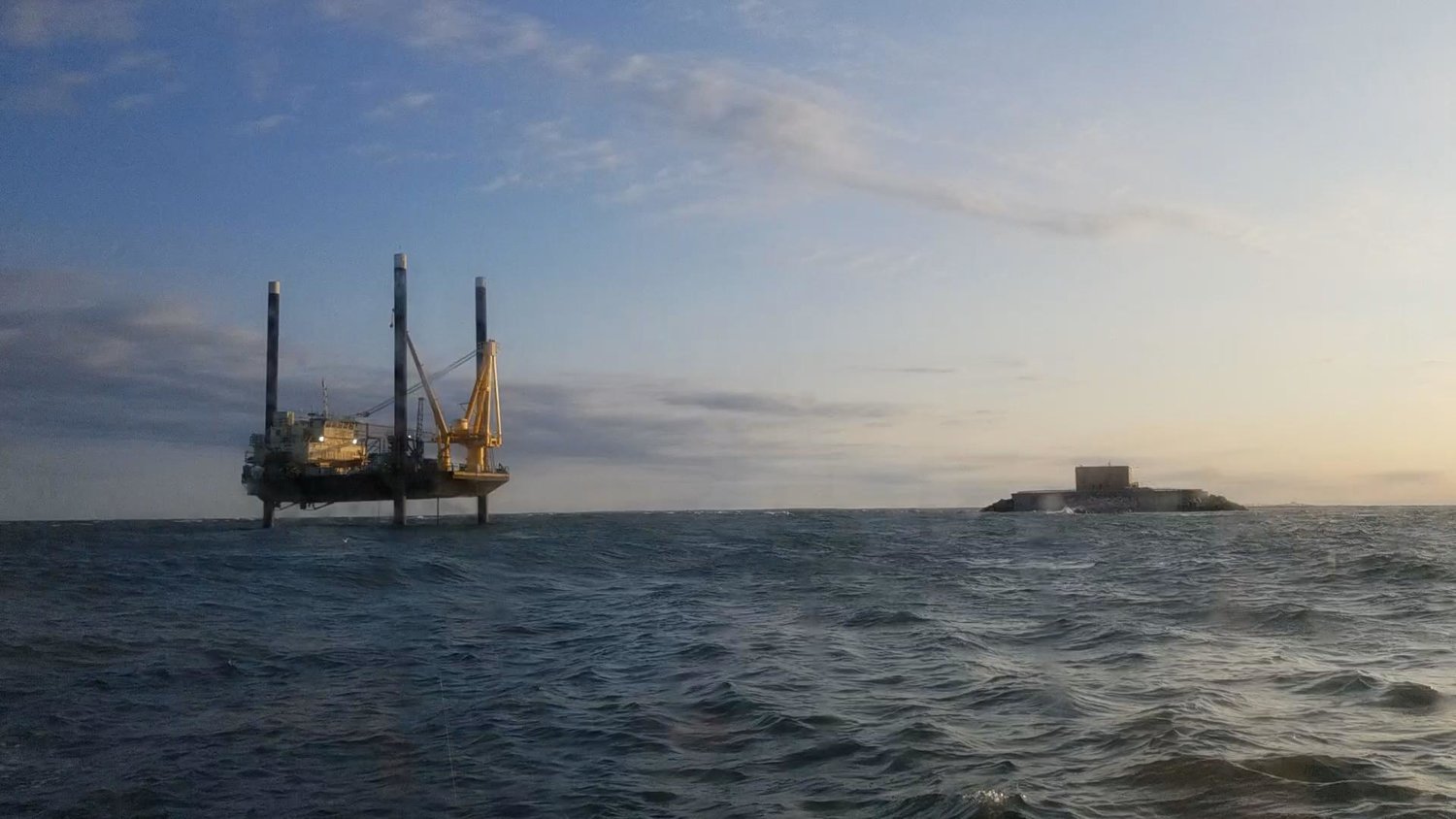 The Jack-up barge is to be used to test soil samples to determine the best place to place an electric wire to connect to a wind farm.
Courtesy Equinor USA
By James Bernstein

It is 113-feet-long, 70 feet wide, and has 175-foot legs that move up and down. And it will be visible in the waters off the barrier beach for the next few months.

There is no need for fear because it is not any kind of sea monster. It is a Jack-up barge that will be used as an important step toward eventually building what would be New York state’s largest offshore wind farm, if all government approvals are ultimately granted to Equinor, a company based in Norway, with U.S.  offices.

The proposed wind farm –years off if it is approved – is a $3 billion project called Empire Wind that includes plans to run an underground cable through Long Beach to a substation near the E.F. Barrett Power Station in Island Park. A precise location for the cable has not yet been determined.

The Jack-up barge, is used to take samples of the underwater soil to test its strength and composition. The aim is to help determine the bst location to run an electric wire  to landfall.

The barge called Aries Marine – Ram XV, will be anywhere between 1/10th-1/2  of a mile of  the coast. THE barge is to start work in Lido Beach this week, and is to be in Long Beach in 20 days. The work is expected to be completed by March.

“This is part of an on-going process,” said Ana Fisyak, an Equinor spokeswoman. “This will help us evaluate the positions” for landfall.

Construction of the wind far is far off. The federal Bureau of Ocean Energy Management is to begin an environmental review of the construction and operation of what would be called Empire Wind, off Long Island’s South Shore. The review is expected to take two years, and the project would need state approval as well. Work on Empire Wind would begin no sooner than 2025.

The wind turbines would be about 15 miles offshore.

Long Beach would not be involved in the approval process, but would help determine the location of the underground cable.

John McNally, a spokesman for the city, said if Equinor wants to run a cable to the power station “the city will have a decision to make.”

All permits sought and approved so far were through state and federal authorities.

The project has the wholehearted support of Long Island’s Citizens Campaign for the Environment according its executive director Adrienne Esposito.

“We strongly favor off-shore wind,” Esposito said earlier this week. “We need to transition away from fossil fuel. They (Equinor) need to do this assessment.”

But The Long Island Commercial Fishing Association is strongly opposed to the project, claiming that fish, and fishermen, will be adversely affected.

An Equinor spokesman, David Marks, had estimated that the project would cost about $3 billion, and said it would be the largest wind farm in New York state. It would produce more than 2,000 megawatts of power, Marks said, adding that the Long Beach portion of the project would supply power to about 800,000 customers.