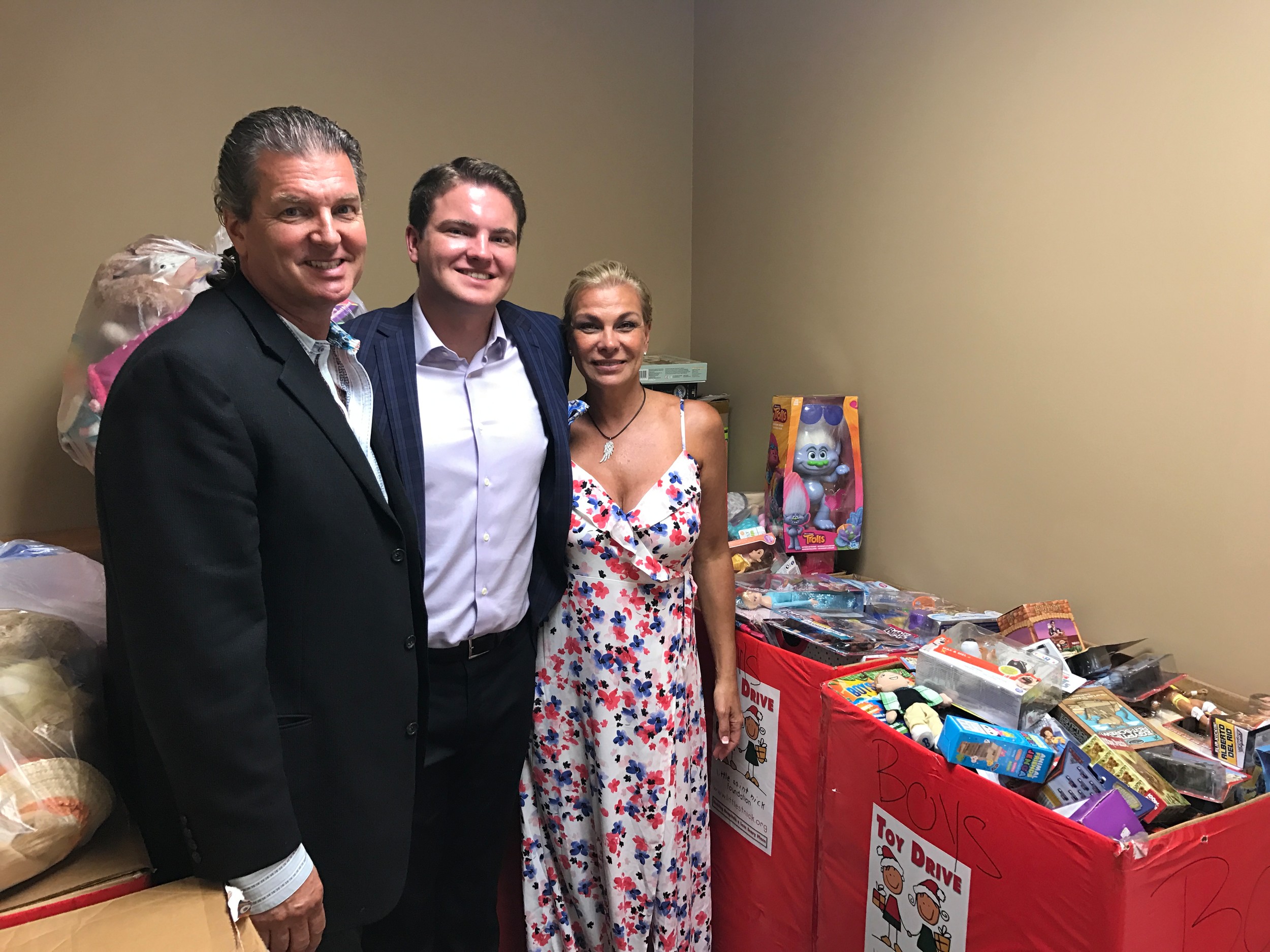 The Little St. Nick Foundation celebrated the grand opening of its headquarters in East Rockaway on June 21. Raymond Mohler Jr., founder, attended with his parents, Ray Sr. and Dina. One of the building’s rooms is filled with toys that will be donated to ailing children at local hospitals.
Mike Smollins/Herald 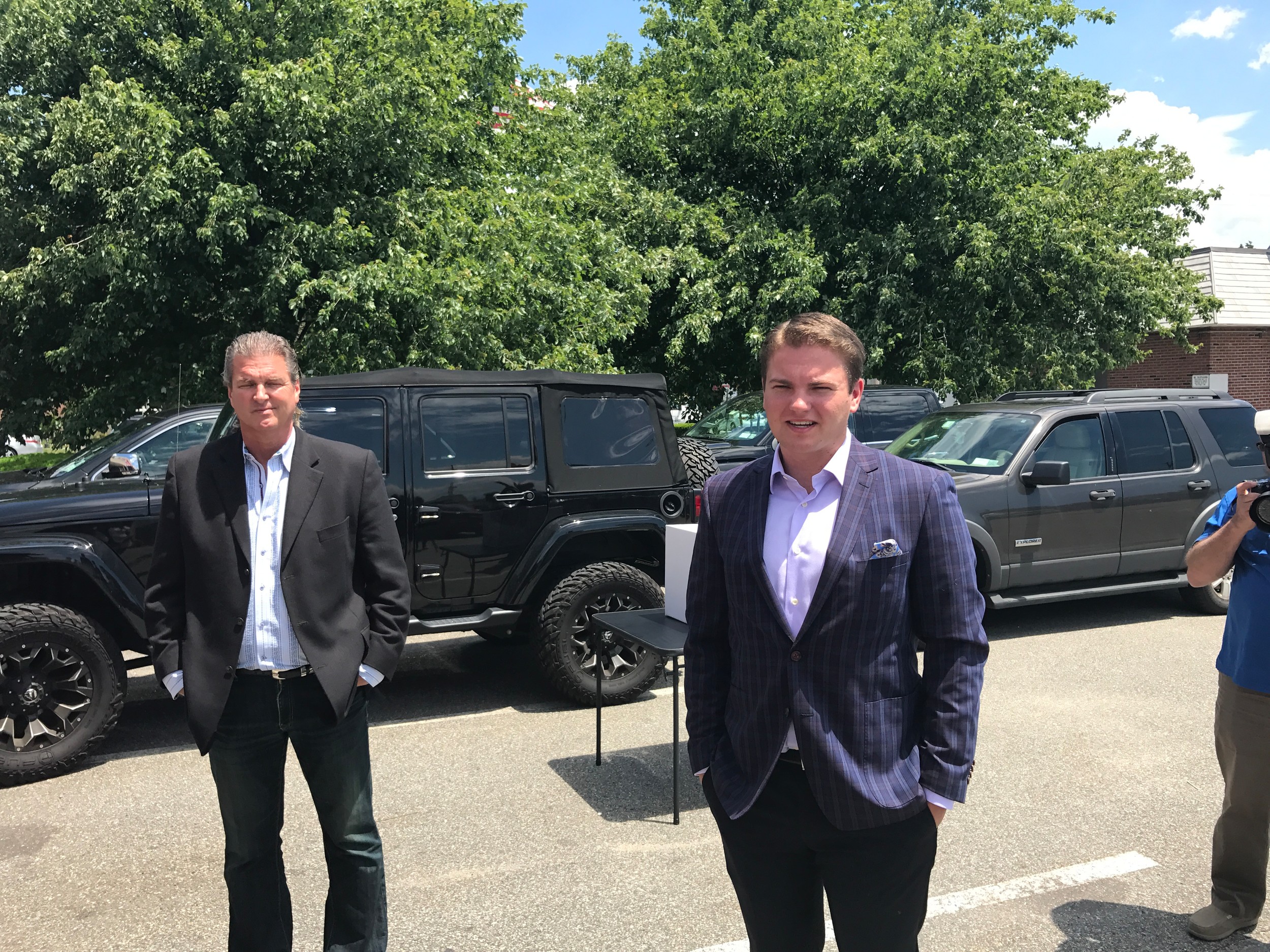 Ray Mohler Jr. addressed the future goals of his foundation during its grand opening ceremony as his father, Ray Sr., watched.
Mike Smollins/Herald
Previous Next
By Mike Smollins

It is only fitting that Raymond Mohler Jr. was born on Christmas Eve. Ever since he was 4, he has acted as a real-life Santa Claus, running toy drives and collecting donations to put smiles on the faces of children in hospital emergency rooms. Unlike St. Nicholas, however, Mohler delivers toys all year round.
Mohler, 19, is the founder of the Little St. Nick Foundation, which collects toys and distributes gift bags, made by children, to children in the emergency department of local hospitals. The foundation celebrated the grand opening of its office at 131 Main St. in East Rockaway with a special ceremony on June 21.
“We are focusing right now with this office here to expand to other chapters and have kids inspiring kids to help kids,” Mohler said, sitting at the head of a table where he ran the foundation’s first board meeting hours earlier.
On the first day of each month, Little St. Nick donates 300 gift bags to Winthrop-University Hospital in Mineola and Cohen’s Children’s Medical Center in Queens. The gift bags contain a Beanie Baby, a coloring book, crayons and a brochure about the organization. “Kids are gonna run the gift bag programs, do all the work in terms of making the bags and doing toy drives and then they’ll inspire more kids to help,” Mohler said.
One such child was Cadence, 10, a student at Rhame Avenue School. Cadence’s mother, Andrea Martin, said her daughter has experienced bullying because of her attention deficit hyperactivity disorder and wanted to assist other children facing adversity.


Cadence and 10 others helped Mohler pack gift bags on June 13. “I felt so happy,” Cadence said. “Sometimes it almost makes me tear up because these kids have so much problems. I know they need help and everything and I try to do the best that I can.”
In addition to the goody bags, the foundation also provides mobile entertainment systems (rolling carts that contain a TV, a gaming system, DVDs and headphones), hosts toy drives between Thanksgiving and Christmas and grants wishes, such as hospital visits from athletes and concert tickets. Mohler said he is open to helping any hospital, and that he also works with Zucker Hillside Hospital and St. Mary’s Hospital for Children — both in Queens.

Starting St. Nick
For Mohler, it all began when he was diagnosed with a rare hip-joint disease at age 4. He was only in the hospital for eight hours, but he was scared while there. He recalled that when he returned home, the image of other hospitalized children stayed in his head and he wanted to do something for them.
His parents, Raymond Sr., and Dina, suggested that he give some of his birthday and Christmas gifts to the children. “It was something I liked doing,” Raymond Jr. recounted. “I liked the feeling of it. I realized that it was something that I wanted to make big.”
At age 5, Mohler went door to door in his Lynbrook neighborhood, asking for donations with a goal of purchasing gifts for children in need during the holidays. When he was 6, Mohler and his parents reached out to the Islanders and partnered with players from the team to see sick children at South Nassau Communities Hospital in Oceanside, filling the toy room with goodies and visiting the children’s bedsides.
“It always just brought him joy to want to give,” Dina said. “I didn’t know this was going to happen. … You really feel an accomplishment like you did something right as a parent.”
When Mohler wanted to increase his efforts, his parents helped him start the foundation from his home in 2004. He has always been in charge of it, but became even more active as he got older. Most of the toys collected are stored in a warehouse down the street from the foundation’s headquarters. Mohler is going into his sophomore year at the University of Tampa, but plans to continue running the foundation from college.

Inspiring others
Now that the foundation has a home base in East Rockaway, Mohler said he is hoping to expand it to other states. Before the grand opening ceremony on June 21, he ran his first board meeting to strategize about expansion.
Little St. Nick already has a chapter in St. Louis. In March 2016, Mohler appeared on the Nickelodeon documentary, “The Halo Effect,” to discuss his foundation. A 12-year-old Missouri resident, Agha Haider, was watching at home and wanted to get involved. Haider connected with Mohler and began running his own toy drives. Mohler said that in the next five to seven years, he hopes to expand to about 30 other cities around the country.
Raymond Sr. said he was proud to serve on the 12-person board, watch his son conduct a meeting and run the foundation without needing his help. He also emphasized how important it was to aid children in need.
“At the same time as you’re creating a youth movement of kids inspiring kids to be more involved with the community, you’re also serving more kids in the hospitals,” Ray Sr. said. “To [help them] get over their fear, anxiety and isolation related to their visit.”
The foundation hosts many events throughout the year to raise money. The next is a summer luau at E.B. Elliott’s Waterfront Restaurant and Bar on July 26 at 6 p.m. The event costs $20 at the door and includes raffles, music, a magic show and food.
After helping sick children for the past 13½ years, Mohler spoke about the future of his charity during the grand opening ceremony, which was attended by his friends, family members and Town of Hempstead Supervisor Anthony Santino. He said the new building signifies an opportunity to help even more children.
“This office building represents a new beginning for St. Nick and myself and everyone,” Mohler said to more than a dozen people standing outside the foundation headquarters as grand opening banners flapped in the breeze behind them. “… I’m really excited for the future.”

To learn more about the foundation, visit littlestnick.org.
Report an inappropriate comment